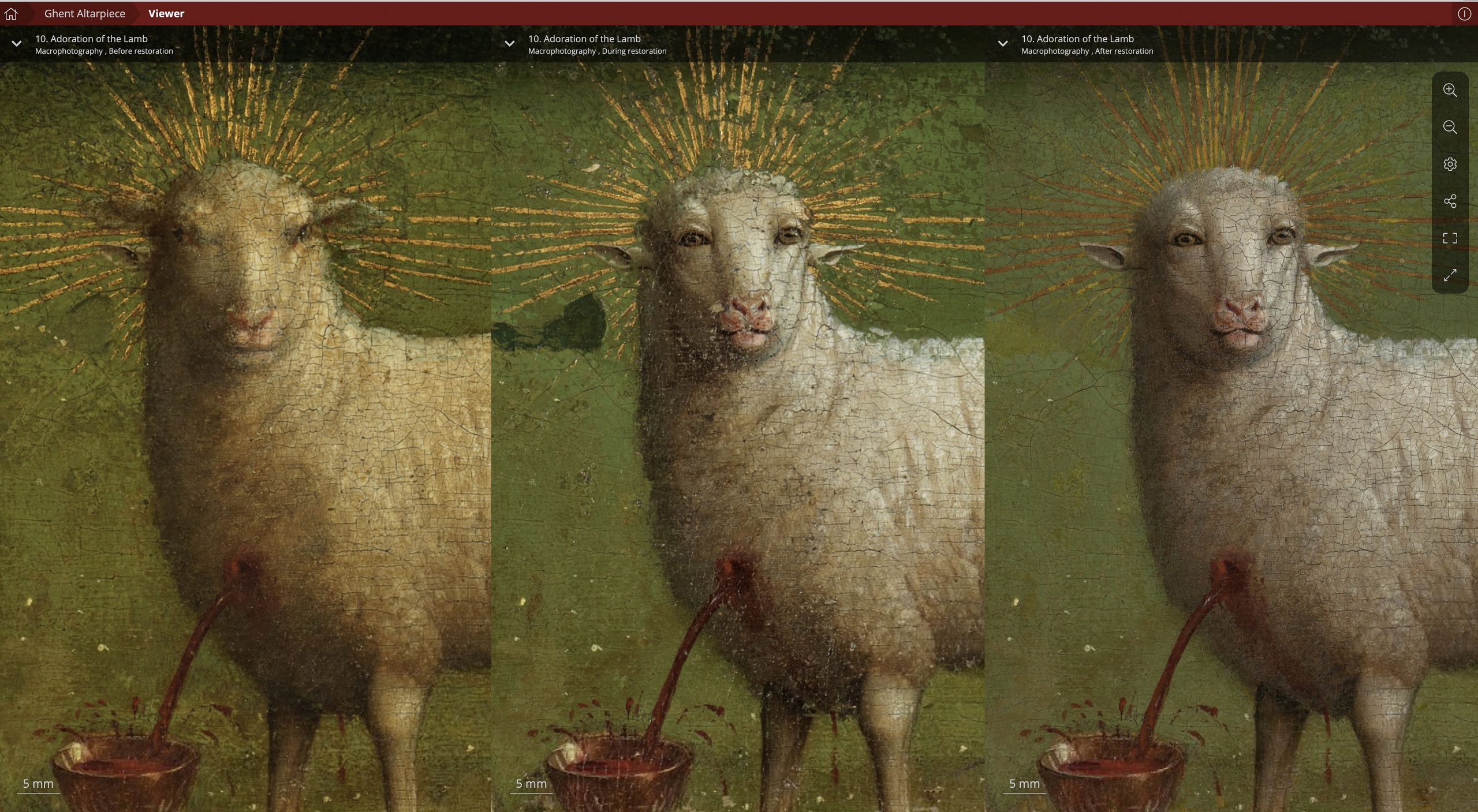 The Lamb of God on the central panel, from left to right: before restoration (with the 16th-century overpaint still present), during restoration (showing the van Eycks’ original Lamb from 1432 before retouching), after retouching (the final result of the restoration)

Since 2012, the website Closer to Van Eyck has made it possible for millions around the globe to zoom in on the intricate, breathtaking details of the Ghent Altarpiece, one of the most celebrated works of art in the world. More than a quarter-million people have taken advantage of the opportunity so far in 2020, and website visitorship has increased by 800% since the onset of the COVID-19 pandemic, underscoring the potential for modern digital technology to increase access to masterpieces from all eras and learn more about them.

The Getty and the Royal Institute for Cultural Heritage (KIK-IRPA, Brussels, Belgium), in collaboration with the Gieskes Strijbis Fund in Amsterdam, are giving visitors even more ways to explore this monumental work of art from afar, with the launch today of a new version of the site that includes images of recently restored sections of the paintings as well as new videos and educational materials.

Located at St. Bavo’s Cathedral in Ghent, Belgium, The Adoration of the Mystic Lamb (1432) by Hubert and Jan van Eyck, also known as the Ghent Altarpiece, is a stunningly beautiful and highly complex polyptych that features biblical themes and figures. After centuries of accumulating dirt, yellowed varnishes, and extensive overpainting (as well as enduring a brief stint in storage in a salt mine during World War II), the artwork was in dire need of a full restoration.

Two-thirds of the work of art has already been treated by a team of highly skilled conservators from KIK-IRPA. The first phase of the restoration (on the exterior panels, visible when the altarpiece is closed) was completed in 2016. It reached a new milestone in December last year with the completion of the second phase, which included the restoration of the eponymous Adoration of the Lamb and the results of which are now available to view on the updated site. The conservation treatment has been captured in full through ultra-high resolution photographic and scientific documentation by KIK-IRPA’s imagery team and all these images can now be studied on Closer to Van Eyck.

New after-treatment images on Closer to Van Eyck present many of the scenes in the altarpiece as they were originally meant to be seen. This includes the much-publicized Lamb of God at the very center of the painting (above), which had been ‘toned down’ by a 16th-century overpainting. Interdisciplinary state-of-the art research allowed for the removal of this layer of overpaint, finally revealing van Eycks’ intense representation of the Lamb’s human-like features. High-resolution images before, during and after restoration now allow visitors to compare the results for themselves.

Zooming into the details with this website provides a fascinating insight into the accuracy and ease of the master’s hand. Light plays on metals, plants, hair, skin, and textures that are reproduced with unparalleled attention. No less than 75 individual species of plants in the paintings can now be identified by botanists, and the shadows of leaves, trees and bushes offer a wondrous sense of depth and three-dimensionality. Even the ground displays extraordinary nuances, from waterlogged mud to soft sand and hard rocks scattered with gemstones, crystals, and coral. The cleaning also revealed minutely detailed buildings that were hidden for centuries under layers of overpaint.

New infrared reflectography images (IRRs) take viewers on a journey beyond the paint surface to the underdrawings: the first stages of the design of the compositions that reveal the artist’s creative process. Full IRRs of all treated panels are now available, in beautiful, seamless assemblies. In addition to the underdrawings, IRRs can also reveal underpaintings executed in a dark paint, such as in the foliage of the trees behind Saint Christopher in The Pilgrims.

The newly released conservation report on phase two of the treatment is available for download in the “Extras” menu of the website. This beautifully illustrated account gives a unique insight into the inner workings of the decision-making process during the conservation and restoration treatment.

Closer to Van Eyck is coordinated by Professor Ron Spronk (Queen’s University, Kingston, Ontario, Canada; Radboud University Nijmegen, the Netherlands). Thanks to its innovative interface, developed by Universum Digitalis (Brussels), the site allows specialist scholars and the general public to study and compare images in any combination and in incredible detail.

Since 2010, several Getty Foundation grants awarded through its Panel Paintings Initiative have supported essential preliminary research for the restoration of the altarpiece and the initial development of Closer to Van Eyck. Additional grants by the Getty Foundation and the Gieskes Strijbis Fund supported the expansion of the website and the inclusion of images from the restoration treatment. This support also made it possible to significantly expand the site’s didactic materials on research and conservation, creating an even more important teaching resource.

Closer to Van Eyck is the result of the close collaboration of numerous institutions and individuals, listed here. More information about the Getty Foundation’s Panel Paintings Initiative is available here.