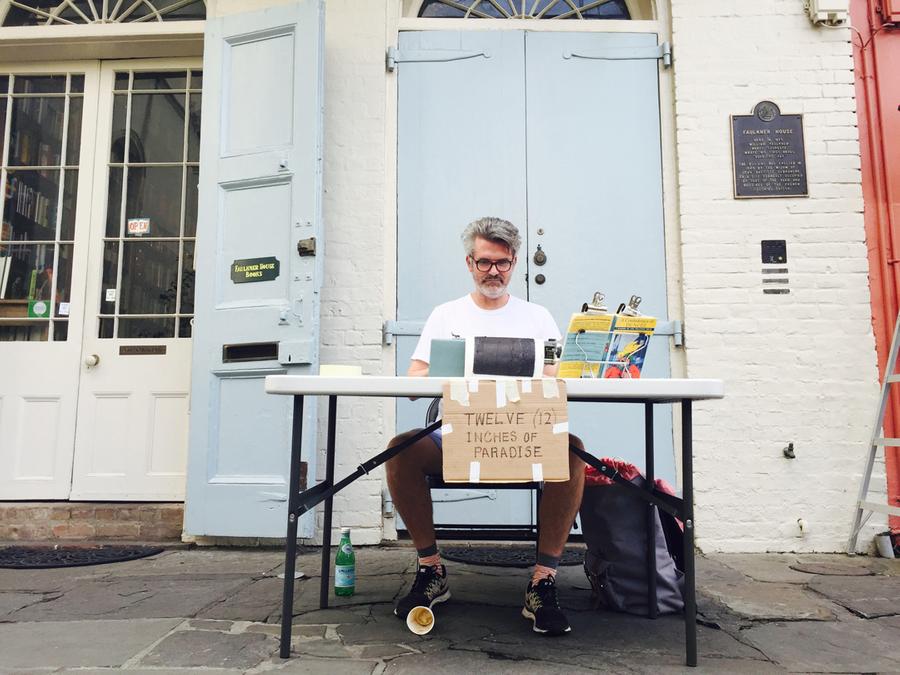 Cristin Tierney gallery has announced its participation in the 2020 edition of The Armory Show – Booth 303. The gallery will have a booth in the fair’s newest exhibitor section Perspectives, featuring a performance and objects by Tim Youd. It is presented in conjunction with a solo show of the artist’s new paintings at the gallery.

In March 2020, Cristin Tierney will present Youd typing The Bell Jar by Sylvia Plath in a solo booth at The Armory Show. Each day he will set up his typewriter at a folding table, and the sounds of him typing will echo through the fair’s hallways with brief pauses as Youd stops to answer questions. Surrounding the artist in the booth will be select performance relics.

For seven years Tim Youd has been engaged in a performance project that has taken him across the globe. Called 100 Novels, the performances all follow the same formula: Youd retypes a selected novel on the same make and model typewriter used by the author, in a location related to the novel or author.

Youd’s project is perfectly situated in the Armory Perspectives section, which invites fresh perspectives on the past. First published in 1963, The Bell Jar is considered a classic of American fiction and a roman à clef due to its similarities to people and events from the author’s life. It follows the story of Esther Greenwood, a young woman who moves to New York in pursuit of a literary career. As Esther struggles with the increasing effects of her mental illness, her work and relationships suffer, and she eventually attempts suicide. The Bell Jar is notable for its frank portrayal of rarely discussed topics such as a woman’s pain, private thoughts, and mental health treatment. Further, Plath’s character’s descent into a pervasive and suffocating depression contrasts the extreme order, control, and decorum expected of women at the time of the book’s publication.

When retyping, Youd types all the words of the novel onto one page (which is backed by a second sheet) by running it through the typewriter over and over again. The words become illegible, and the accumulated text becomes a rectangle of black ink inside the larger rectangle of the white page. Upon completion, Youd separates the two pages and mounts them side-by-side as a diptych.

The other performance relics in the booth are similarly ripe for recontextualization, and represent a variety of perspectives from post-war American life. Naked Lunch (1959) crystallizes the major threads of the growing Beat Generation in a series of vignettes that travel through the US, Mexico, Tangier, and beyond; the similarly peripatetic City of Night (1963) is a lightly fictionalized account of the author’s life as a hustler. Mrs. Bridge (1959) relates the story of an upper-middle-class family from the Midwest confronted by a changing sociopolitical landscape. Wise Blood (1952) is a classic example of Southern Gothic literature, relying on grotesque, irrational, and abject characters and plot points to illuminate the fallacy of an idyllic antebellum South. The Talented Mr. Ripley (1955) is a narrative in part about the haves and have-nots, and the dark side of unchecked greed and American ambition. And The Autobiography of Miss Jane Pittman (1971) dives into the lives of African Americans post-slavery, particularly the ways in which their rights continued to be curtailed.

All of these novels were written during a period of upheaval in the United States, marked by uneven postwar economic growth, the civil rights movement, Cold War, Vietnam War, McCarthyism, and the burgeoning counterculture. Youd’s presentation at the Armory Show will offer the audience an opportunity to look back at some of these concerns decades later, as America once again struggles to define its identity.

To date, Youd has retyped 65 novels in projects with CAM St. Louis, Vassar College, SCAD, New Orleans Museum of Art, MCASD, MOCA London, as well as others. His performances have been reviewed by The New York Times, Artforum, Artnet News, Hyperallergic, The Village Voice, The Art Newspaper, Interview, and a variety of other national and international publications.

Cristin Tierney Gallery will simultaneously show Tim Youd solo show March 6 – April 18, and there is a reception on Friday, March 6, 2020, from 6 to 8 pm.