Charles Gaines: ‘Palm Trees and Other Works’
A Rigor and Specificity to Investigations

Palm Trees and Other Works

Since the early 1970s, Charles Gaines has been making serial artworks in which he carefully maps aspects of nature, transforming living forms like trees into a succession of marks or numbers, that occupy a specific place and/or color within a grid. Known as Gridworks, these pieces are often presented in sequences that track changes, like growth patterns or fallen leaves. Gaines’ entry into the use of systems was a way for him to understand the world around him and interrogate the relationship between the object and our subjective understanding of it. 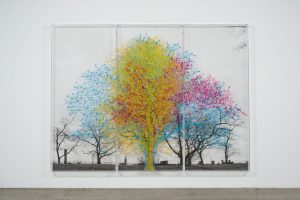 He states, “I wish to use art as a tool for investigation… I am able to apply a logical sequence (system) to a single thing and thus dismantle it.” Integral to his process is both the dismantling —reducing “things” to their essential elements— and their reassembling. Gaines uses rigorous algorithms to create simultaneously aesthetic and computational objects. 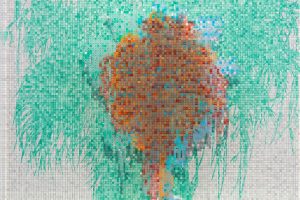 In Palm Trees and Other Works, his first exhibition at Hauser & Wirth, Los Angeles, he has created a new series of Gridworks. The ten pieces that comprise Numbers and Trees: Palm Canyon, Palm Trees Series 2, (2019) begin with black and white photographs. Each work has a background layer: a photograph of palm trees shot on location in Palm Canyon (an Indian Reservation and park near Palm Springs, CA). 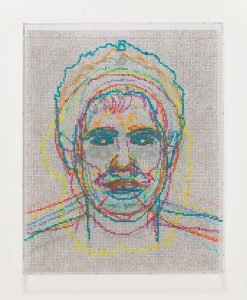 Gaines assembles the photographs into large clear acrylic boxes that are approximately 109 x 57 x 5 inches. The faces of the boxes are inscribed with a grid and each square is assigned a number and a letter. The shape of the tree in the background is carefully copied, one square at a time, using a brush full of acrylic paint. The application of paint is instantaneous and this causes variations in tonalities across the composition, something Gaines accepts and does not try to control. 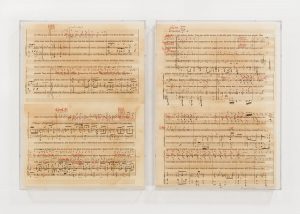 As the series progresses, he adds another and then another tree to the system, each one painted in a different color, eventually arriving at a complexly layered composition of colored trees, superimposed over the final tree. Within Gaines’ system, the trees become elements within a grid, a set of plotted points, the photographic referent losing all of its resonance and specificity despite the fact that the works are titled after Native American tribes or places in the Mojave Desert (Cahuilla, Cupeno, Lusieno, Kumeyaay, Quechan, Chemehuevi, Mission, Fort Mojave, Kawaiisu,Tubatulabal). 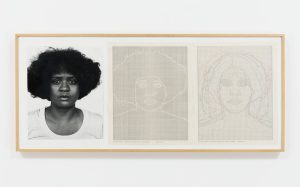 While on some levels Gaines is a die-hard conceptualist whose objective works are derived from algorithms, he is also a theorist with social, environmental and historical concerns who makes pieces about the structure of language. Often, the Gridworks are shown in conjunction with works using language. Manifestos 3, (2018), consists of two large-scale graphite drawings and a single channel video with sound. 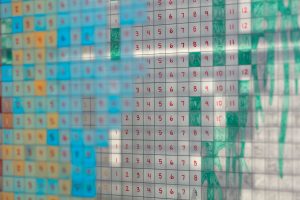 For Manifestos 3, Gaines selected two essays, one by James Baldwin, the other by Martin Luther King to translate into musical notes, mapping the letters of the alphabet used in musical notation (A-G). Each time the letters A-G appear in the text, they are marked by their accompanying musical note as seen in the graphite drawings. The other letters become silent beats in the score. The written score is recorded and the music produced is played while the monitor scrolls through the text. 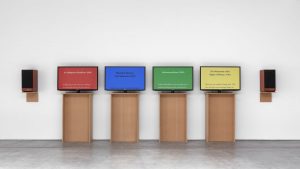 As in all of Gaines’ pieces, there is a rigor and specificity to his investigations. The works use displacement to see one “thing” through another. Trees become numbered squares. Political texts (manifestos) become musical scores. Gaines steps back. He allows objective processes to evoke subjective responses that resonate beyond the formal building blocks of their making. 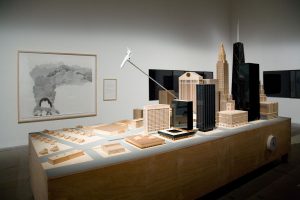