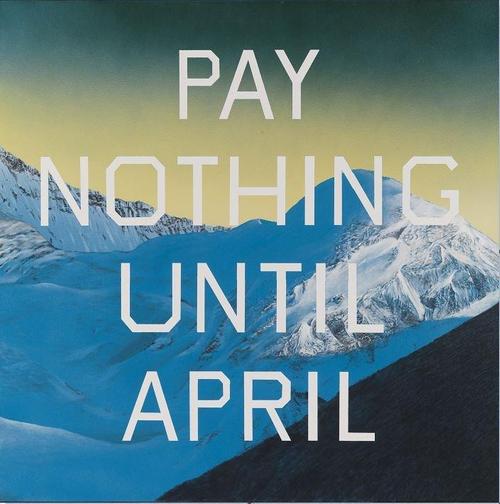 Ed Ruscha, Pay Nothing Until April 2003. ARTIST ROOMS. Acquired jointly with the National Galleries of Scotland through The d'Offay Donation with assistance from the National Heritage Memorial Fund and the Art Fund 2008

ARTIST ROOMS: Ed Ruscha, the latest in the series of annual free displays in the dedicated ARTIST ROOMS gallery in Tate Modern’s Blavatnik building will run until Spring 2020. It features works spanning the entirety of Ruscha’s six-decade career, including large text-based paintings and his iconic photographic series.

Also featured is a comprehensive display of Ruscha’s artist’s books, including Various Small Fires 1964 and Every Building on the Sunset Strip 1966, as well as some 40 works on paper gifted to Tate for ARTIST ROOMS by the artist following his 2015 promise to donate all future prints he makes to the national collection. This builds on the spectacular generosity of Ruscha’s gift of his painting The Music from the Balconies 1984 to the ARTIST ROOMS collection in 2009.

American artist Ed Ruscha (b.1937) is well known for his depiction of isolated words and phrases, often superimposed over picturesque landscapes or featuring incongruous objects and a variety of textures, real or simulated. His early career as a commercial graphic artist strongly influenced his techniques and thematic approach, referencing the language of advertisement. Although initially inspired by Neo-Dada and Pop Art, his paintings quickly demonstrated a unique aesthetic that defies easy categorisation. His text-based works, photographic series of urban landscapes and enigmatic artist’s books were hugely influential in the development of conceptual art in the 1960s and 1970s, and his sardonic takes on the banality of modern life continue to inspire generations of artists.

Ruscha used unconventional materials in his graphic work of the late 1960s and 1970s: He drew with gunpowder and painted and printed with foodstuffs and a variety of organic substances; for example, DANCE? 1973 was made using coffee, egg white and mustard.

He often draws inspiration from his adopted hometown of Los Angeles, from its architecture and topography to the mass media imagery it generates. This exhibition includes his series of photographs of LA’s swimming pools and parking lots, as well as paintings inspired by classic Hollywood cinema such as The Final End 1993.

In Ruscha’s works commonplace expressions and out-of-context quotations are paired with visual stereotypes and familiar objects, generating images that are eye-catching and yet somehow mundane, as seen in the painting Pay Nothing Until April 2003. His works are characterised by a deadpan sense of humour, although they can also be interpreted as commentaries on consumer culture and other aspects of contemporary American society and politics, as seen most explicitly in the large painting Our Flag 2017.

This exhibition draws from ARTIST ROOMS, a touring collection of over 1,600 works of modern and contemporary art by more than 42 major artists. The collection is displayed across the UK through a touring programme, supported by the National Lottery through Arts Council England, Art Fund and Creative Scotland. The ARTIST ROOMS collection is owned jointly by Tate and the National Galleries of Scotland and was established through The d’Offay Donation in 2008, with the assistance of the National Heritage Memorial Fund, Art Fund and the Scottish and British Governments. The ARTIST ROOMS gallery opened in the Blavatnik Building on 17 June 2016 with an exhibition of Louise Bourgeois, followed by Bruce Nauman in 2017 and Jenny Holzer in 2018.