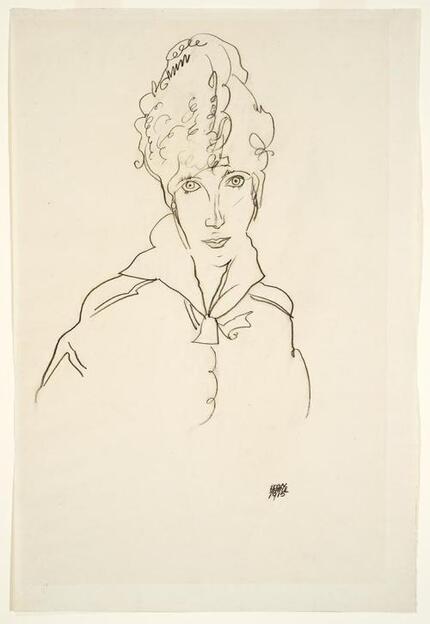 The Museum of Modern Art in New York and the Santa Barbara Museum of Art in California are each being sued for the return of a work by Egon Schiele said to have been stolen from a holocaust victim by Nazis. Timothy Reif and David Fraenkel, the heirs of Austrian Jewish cabaret crooner Fritz Grünbaum, who was killed at Dachau in 1941, are suing MoMA over Schiele’s 1912 painting Prostitute, and have targeted SBMA over the artist’s 1915 pencil drawing Portrait of the Artist’s Wife. The suits, which were filed last week, allege that Nazi officials forced Grünbaum to relinquish his assets while he was imprisoned at Dachau.

As first reported in the Daily Beast, the MoMA suit contends that “on July 16, 1938, Nazis forced Grünbaum to sign a power of attorney in the Dachau Concentration Camp permitting his wife Elisabeth [Herzl] to liquidate his assets and hand the assets over to the Nazi regime.” Shortly thereafter, Herzl was moved to the Maly Trostinec concentration camp in Minsk, Belarus, where was murdered in 1942. According to the suit, Jewish Property Declaration documents dating to the time of the illegal transfer show that the eighty-one artworks in Grünbaum’s collection were stamped “Erledigt” (German for “completed” or “done”) and “Gesperrt” (“blocked” or “closed”), proving that they passed through Nazi hands.

The MoMA suit alleges that Prostitute was listed in a 1956 Swiss auction house catalogue of Schiele’s art, all of which the heirs contend had been stolen from their ancestor. MoMA’s own listing of the work reveals the source of funding used to purchase the work but gives no acquisition date. The complaint avers that MoMA had previously been alerted to the work’s tainted provenance and accuses the institution of failing to do “exercise appropriate diligence” in buying it.

The SBMA suit claims that Portrait of the Artist’s Wife was from 1956 until about 1966 held by New York’s Galerie St. Etienne before being wrongfully removed from the county. An SBMA spokesperson told the Daily Beast that museum officials were unaware of the unsavory history behind the drawing, which entered the collection as the gift of a founding member.