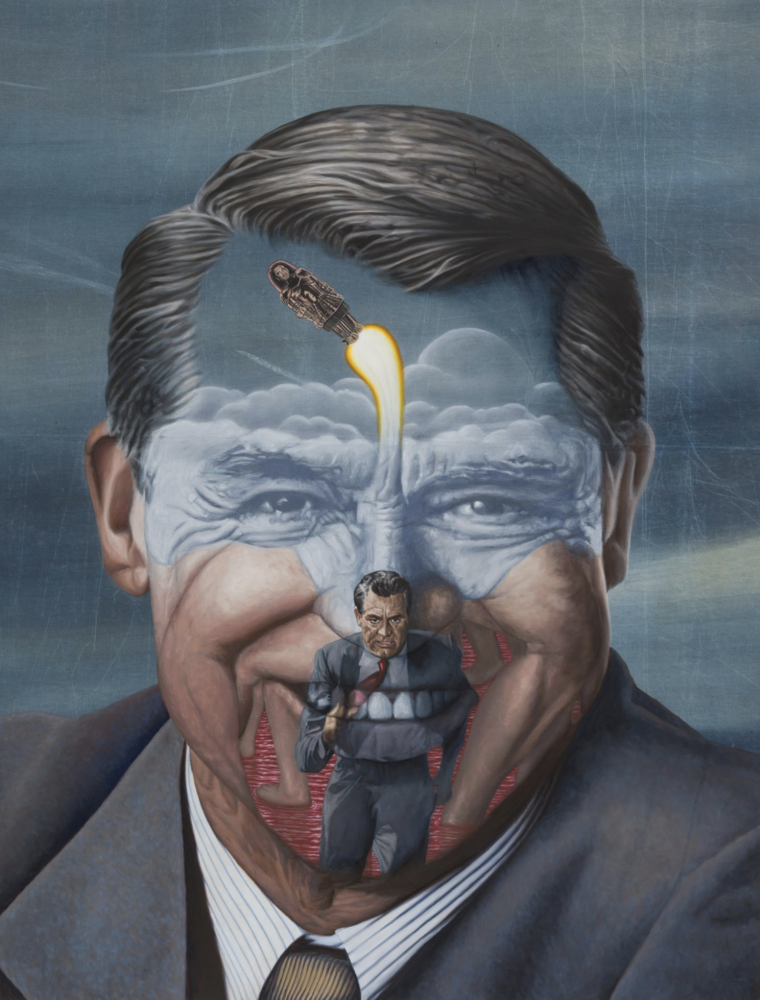 Gagosian has announced Thinking the Unthinkable, an exhibition of new paintings by Jim Shaw which will run from January 12–February 25, 2023 in Beverly Hills. This is his first exhibition with the gallery, which announced its representation of the artist in 2021.

In these works, Shaw reanimates mythological themes through incidents from political history and popular entertainment, outwardly disparate fields that collide here in a dreamlike mélange. The characters that populate these images represent what Catherine Taft, writing for Gagosian Quarterly in 2022, describes as “an American limbo, troubled waters into which the artist wades deeper and deeper.” Shaw elaborates on the exhibition’s iconography: “Strewn throughout are competing symbols, including the mushroom cloud, the pillar, the egg, the alphabet, and the ocean.” The exhibition’s title, which suggests both a psychedelic context and the impossibility of examining our own consciousness, is adapted from Herman Kahn’s 1962 book about nuclear war, Thinking About the Unthinkable.

Thinking the Unthinkable explores the figure of the goddess, which for Shaw intersects with Marshall McLuhan’s thesis that the development of the phonetic alphabet had a divisive societal impact, and with Leonard Shlain’s argument that that the laws of written language curtailed the status of women and blunted the potential of matriarchal religion. In Cadmus Sowing the Teeth of the Slain Serpent (2022), Shaw depicts the Greek hero planting the seeds of the alphabet and begetting the warrior fathers of Thebes, while in Going for the One (2022) he casts Raquel Welch as Shiva/Kali god/dess of destruction and rebirth, demolishing the headquarters of 20th Century Fox. The latter scenario intersects with the exhibition’s other key motif: the gleeful deconstruction of Hollywood legend. “I had been researching the history of psychedelics and power,” recalls Shaw, “which led me to Cary Grant (who was, before Timothy Leary, the most vocal proponent of acid), which led me to Esther Williams and her acid trip, which reminded me of her version of the romance with Jeff Chandler.”

These circuitous chains of thought led Shaw to produce three paintings in which scenes from various movies are superimposed on the faces of their stars. A portrait of a grinning Grant is melded with his LSD-induced hallucination of fleeing a world of baby legs and menstrual blood; the face of Broken Arrow star Chandler is interrupted by a hermaphroditic figure (from an acid vision that Williams had of herself divided evenly between male and female) in a pose that echoes Botticelli’s The Birth of Venus (c. 1485); and Williams meets her beau clad in a pink evening gown. Another painting, No Bikini Atoll (2022), also alludes to Botticelli, focusing on “the dark sides of the goddess, her birth through the castration of her father, her revenge against those who fail to honor her, and the sorry hold that desire has on humans, all combined with the US atomic bomb test at Bikini Atoll.”

A zine featuring reproductions of drawings by Shaw will be included in the Spring 2023 issue of Gagosian Quarterly and available at the gallery during Frieze Los Angeles 2023 (February 16–19). An illustrated catalogue including an essay from Gagosian director Jessica Beck, as well as photography of exhibited works, additional recent paintings, and preparatory drawings, will follow.