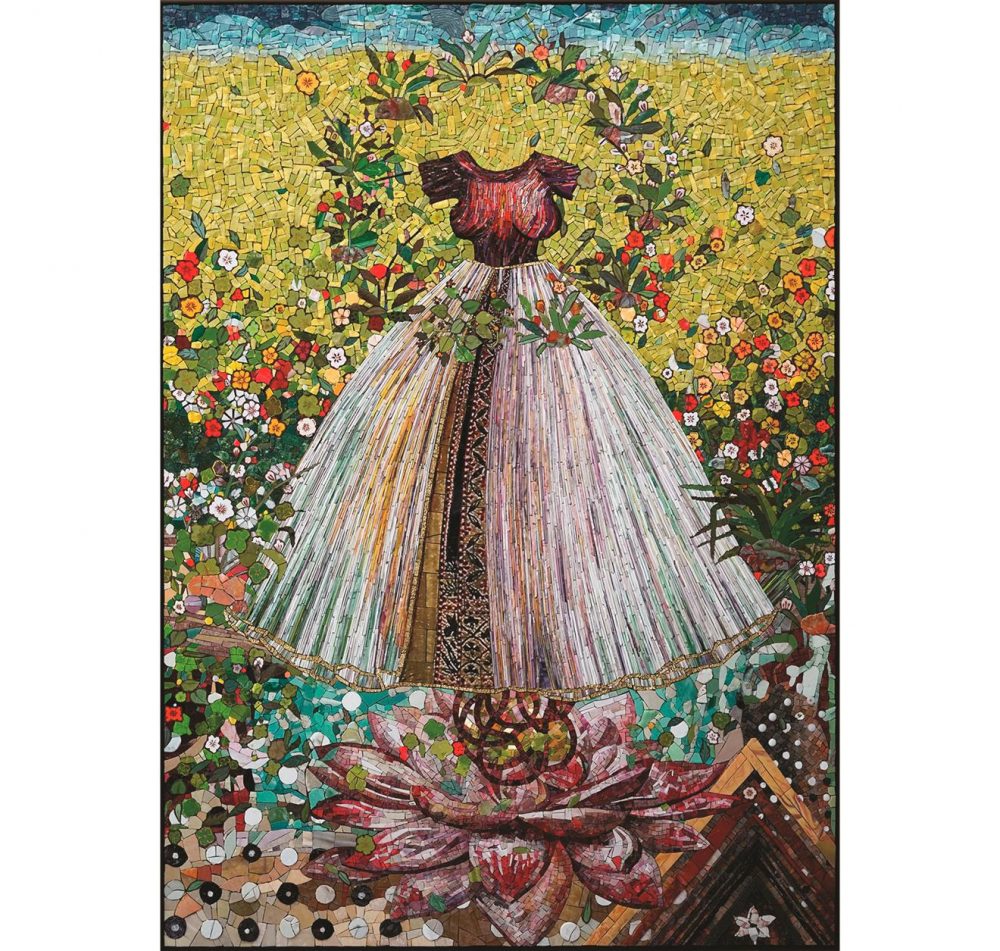 Drawing is central to Sikander’s practice and integral to all aspects of the work in the exhibition. For the artist, drawing implies movement both in time and across various forms. It is a means of imagining and bringing form to life, an armature of research to clarify ideas and connect thinking to gesture, action, and practice. There are connections, both literal and symbolic, in all of the works in the exhibition, such as the dialogues between representation and abstraction, text and image, glass and light, digital and hand, mosaic and animation, geometry and bodies, male and female; there are no binaries. It is the in-between space that is fecund, suggesting the unknown and untranslatable. As Sikander notes, “For me this idea of mystery is a guiding principle – a generative project. I see it as a resistance to the expected. It slows down the consumption of each work, keeping it open ended while being precise, making the viewer search for what can’t be found.”

Such a search is visualized in the opening of Sikander’s animated film Reckoning, 2020, in which two forms, mimicking warriors, are entangled in joust. The film, made from multiple drawings, reveals the cyclical theme of struggle through kinetic forms. Reflecting upon relationships that embody a moment of reckoning, such as between migrant and citizen, woman and power, human and nature, Sikander culls out a dramatic sequence of events in her restaging of an imaginary historical Indo-Persian-Turkish miniature painting. As art historian, Dorothy Price has observed, “In the unfolding of one short 4 minute and 16 second sequence, themes of creation, conflict, tension, colonialism, ecology, fertility, dark matter, and void across time and space are held in tension. The viewer is never allowed to rest over one or another but of necessity holds them all in the cyclical rhythm of Sikander’s expansive and mobile vision.”

In 2015, Sikander began creating mosaics, a direction motivated by the vibrant pixelization in her animated films. Touchstone, 2021, a captivating work by Sikander, depicts an Indian woman shown holding a chalawa (a type of ghost or spirit in Punjabi), which escapes her grasp and cannot be confined. The petals, branches, and tendrils that dance together at the ending of Reckoning are seen again in this work surrounding the figure. The chalawa, a recurring image throughout Sikander’s body of work, reaffirms the artist’s long-standing interest in challenging the conventions of Indian manuscript painting. With her mosaics, Sikander further dismantles the conventional scale of miniature painting as she changes the medium from ink to glass.

Sikander explores a wide range of iconographic symbolism with indeterminate possibilities and richly associative visual language to create her own visual narratives. The Infinite Woman series, 2021, and Gold & Diamond, 2021, are large drawings that hint at the redeeming potential of women’s bodies, juxtaposed against the extractive logic of global capitalism. Sikander’s first sculpture in bronze, Promiscuous Intimacies explores the intersection of multiple times, spaces, art historical traditions, bodies, desires, and subjectivities. The two female protagonists reference the goddess in Bronzino’s An Allegory with Venus and Cupid, and an Indian Devata figure in the collection of the Metropolitan Museum of Art.

Another key work in the exhibition, Epistrophe, 2021/2022 further anchors the centrality of drawing in Sikander’s practice. A large-scale work composed using fluid, spontaneous gestures, producing it involved Sikander’s entire body to amplify motifs that require a different kind of labor, skill, and pace than her smaller, intricate compositions. Regardless of scale, Sikander sees this work as very much in dialogue with classical drawing traditions. She notes, “There is no intention to hide anything… Everything is very visible; the paper is very transparent. It flows, it moves. All marks, including any flaws, become a part of the piece, which has no borders and can expand in any direction, marking a site that is unstable and multivalent.”