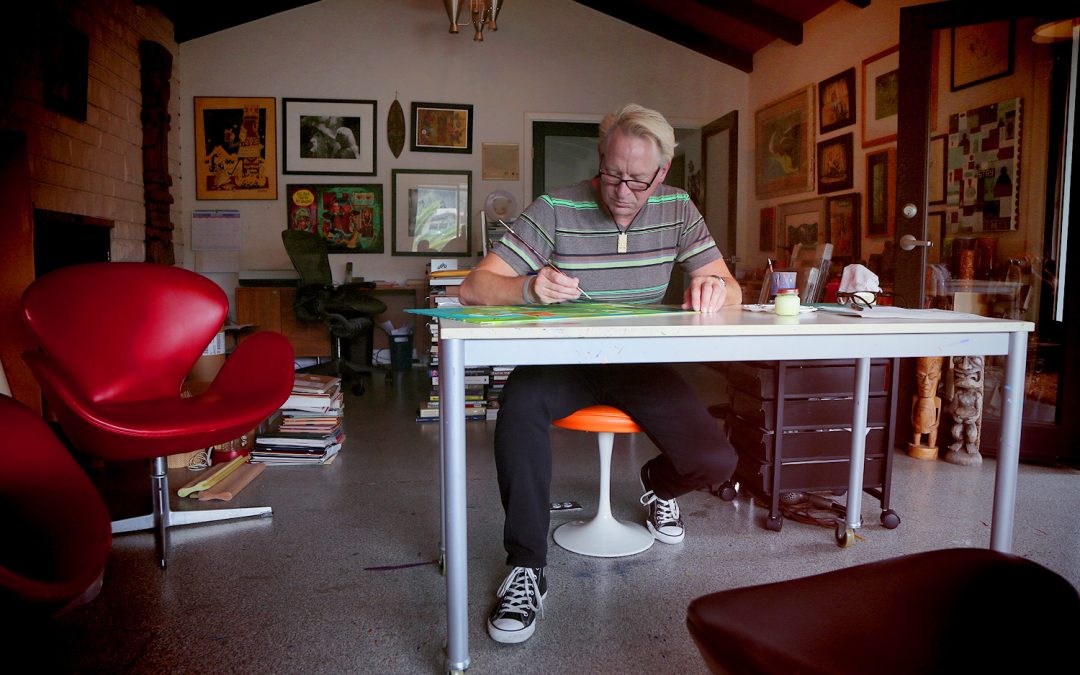 Grooving his way through life, Southern California-born painter and designer Josh Agle, AKA, Shag, whose paintings of mid-century modern fantasy worlds of debauchery, la dolce vita and drinks galore, vividly celebrate consumerism and consumption in equal measure as they also conjure aesthetic narratives – with the New York Times hailing Shag’s “economic use of saturated colors” – plumbs his own psychological depths only to discover what makes him love work and life.

What historical art figure would you like to have lunch with and why? Marcel Duchamp, because he was there in Paris in the early 20th century when Cubism and all sorts of new art styles were being developed. In the 40s he moved to New York and was there at the birth of Abstract Expressionism. 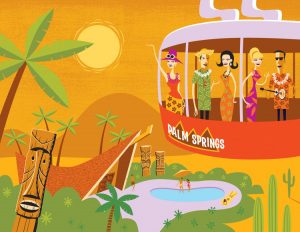 What did you purchase with the proceeds from your first sale? The first item I ever sold was probably in high school – a pen and ink drawing – and I probably bought art books with that money. That was under my [birth] name, and I started using the name Shag in 1987 or ’88. I did commercial illustration under that name and then I started doing paintings under that name in 1995. Most of my friends call me Josh and most of the people I work with call me Shag.

What words or phrases do you overuse? I like to think I’m very pithy and don’t overuse anything. But if I had to say, it would probably be something obsequious like, “It’s my pleasure.” When we end this conversation I’ll thank you for talking to me, and I’ll say “It’s my pleasure.” 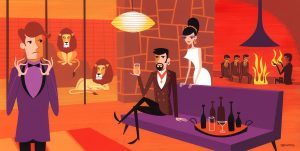 How do you know when a work is finished? I know when a work is finished when I look at the composition and everything’s in balance – the colors, the shapes – they all kind of play off each other, and when I see there’s not some kind of gaping void that needs to be there. My works are figurative, narrative [and] most of my paintings tell a story, as well – all the things they told us we shouldn’t be doing anymore in art school. It was a really classical art education at Cal State Long Beach, and when I graduated, I was able to start working as a commercial illustrator. Other students at UCLA and CalArts, when they graduated they were working at Aaron Brothers. I remember struggling to paint a big still life in oils in a final painting class project and a friend who was going to UCI – she was nailing beer cans to a chair. 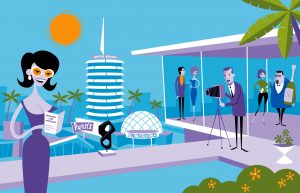 When and where were you happiest? I’m happiest right now, actually. I’m really a forward-looking person, I guess, and not a backward-looking person. If I had to look to the past and think when I was happiest, maybe it was when I got my first apartment in 1988 and felt like I was on my own. I was finally a grownup.

What is your most treasured possession? Aside from those things like my children, my most treasured possession is probably a little Tiki sculpture from the Enchanted Tiki Room from the Disneyland attraction. I  think it was part of the attraction that was removed and replaced at some point. I got it in the late 80s at an antique mall for $5. The Tiki is on a shelf in my living room and was painted by some Disney Imagineer back in 1963 or 1964.

Where is your ideal escape destination? Palm Springs. I worked it so that when I’m out there, there’s no computer. I’m there for relaxing.

What’s the worst survival job you’ve ever had? The worst was when I was digging trenches for sprinkler systems. I remember one day we were digging trenches next to some factory somewhere in L.A., and this factory was belching ammonia and the foreman wasn’t where I was. I was in a cloud of pure ammonia and when he came over he said, ‘You gotta get out of here. That stuff can kill you.’ [The job] lasted about 10 days.

What TV series from your youth best describes your approach to life? I watched a lot of TV as a kid. I would say it was Carl Sagan’s Cosmos, because it kind of convinced me that the universe is so big that whatever happens to me it’s not that big a deal. It gave me this sort of Zen attitude towards my life. The movie 2001 gives me the same feeling. I’ve probably seen that movie more than any other movie. It grounds me when I watch it.

If you could change one thing about yourself, what would it be? I would probably make myself 30 years younger.

What is your most treasured memory? This is going to be a cliché, but it’s the birth of my first child, because that’s a total paradigm shift in your life. I thought when I had a kid, my old life would be exactly the same, but there would also be a kid there. It was not like that at all.

What makes you smile? Almost everything. I’m generally a good-natured person. Looking out my studio window right now makes me smile. I have a view of a valley, a bunch of trees, some houses amongst the trees. There’s a hawk on a pole. I live in Lemon Heights in Orange County and most people in Orange County don’t even know where it is. It’s part of the reason I moved here 16 years ago. When I was living in [the city of] Orange, people used to knock on my door – just strangers – and say, ‘I heard Shag lives here, can I see your studio?’ I decided to move somewhere a little more remote, a little harder to find. 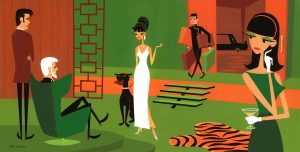 The Queen of Sheba

What makes you cry? I find myself tearing up at things I don’t want to admit – like romantic movies, rom-coms. When the girl ends up with the guy, I have to stifle my tears.

What is your go-to drink when you toast to a sale? I gave up drinking five years ago, so now it would be a latte. Before, when I was drinking, it would be anything. My favorites were Singapore Slings and Rum and Cokes. The Slings are made of cherry brandy, gin and lime juice. They’re strong, but since it’s a tropical drink, it’s super tart, not sweet. 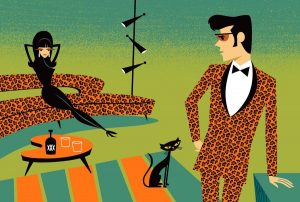 After an all-nighter, what’s your breakfast of champions? Two eggs over easy, sausages, hash browns and an English muffin. I also drink several cups of coffee during the day.

Who inspires you? I’m inspired by a lot of people. I don’t want to give some glib answer, but at the moment it’s probably Charles and Ray Eames. My house is full of mid-century and I was lucky enough to start collecting in the late 80s when it was cheap. I got to take a tour of their house in Pacific Palisades given by their grandson.

What’s your best quality? My best quality is probably that I’m a hard worker – especially for an artist. I know a lot of great artists who are not hard workers and their careers have suffered. I’ll talk to schools and universities and one of the first things I tell them is ‘Honor your commitments.’ Galleries might tell artists they need something by Thursday, but really, they need it on Monday, because they know artists are flaky. If you don’t [deliver], if it comes down to you and another artist, they’ll go with the artist they know they can trust. 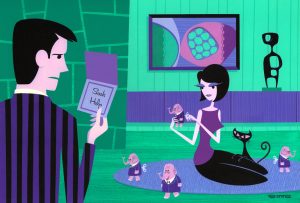 What’s your biggest flaw? I have a lot of flaws, but I’m really judgmental. I have a very firm opinion of the way things should be, especially aesthetically, and if they’re not like that, I’m quick to pass judgment. That’s my job and by doing that, it spreads out into real life.

If you could change one thing about yourself, what would it be? There’s a lot of things I’d like to change, and going down to the superficialness aesthetic, I wish I were 30 pounds lighter. I weighed 155 pounds when I stopped drinking, and then I gained 30 pounds.

What is your current state of mind? I would say relaxed. I finished a couple things today, and tomorrow I’m going to Berkeley. My daughter has just been accepted there in pre-med. Both of my kids are artistic but neither one wants to pursue that, which I’m fine with. 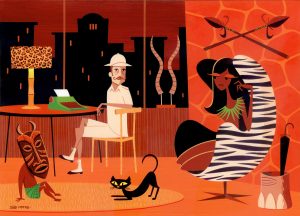 What do you consider your greatest achievement? Having two galleries – one in Palm Springs and one on Melrose. I call them stores, but they’re really galleries. When Palm Springs opened nine years ago, I didn’t want to call it The Shag Gallery, because a lot of people are put off, so I said, ‘Let’s call it The Shag Store and people won’t be afraid to walk in.’

If you were to die and come back as a person or thing, what would it be? I think I’d like to come back as some sort of scientist – something diametrically opposed or the complete opposite of what I do.

Shag is represented by Corey Helford Gallery in Los Angeles.