Anselm Kiefer at Gagosian in New York and Los Angeles 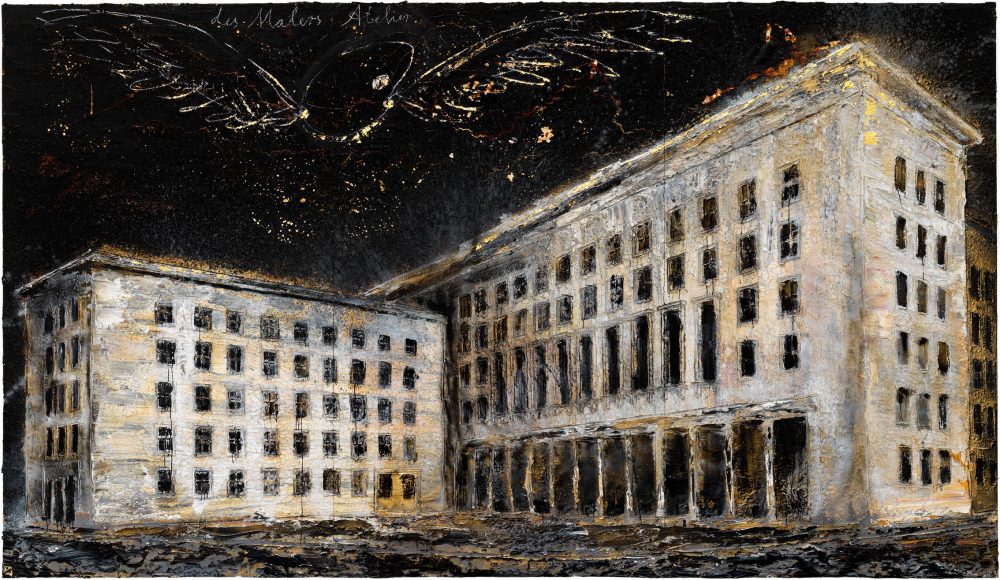 The large-scale paintings on view in New York and Los Angeles employ a wide range of materials including paint, terra-cotta, fabric, rope, wire, found objects, sediment of electrolysis, and metal—including copper and gold leaf. Mixing the abject and the exalted, these works are imbued with gesture, a sense of metamorphosis, and alchemical symbolism.

Kiefer’s syncretic approach to materials extends to his understanding of history, literature, and mythology as forces that inform the present. In this new body of work, he incorporates inscriptions in Hebrew from the book of Exodus, with thematic references to its narrative blended with a diversity of other sources. Full of symbolic thresholds between peoples, places, and times, the paintings are metaphysical allegories that meditate on loss and deliverance, dispossession and homecoming.

The exhibition in New York features paintings of monumental buildings and ruins. Their architectural symbolism is permeated with themes found in Exodus and developed by writers who have long inspired Kiefer, including Paul Celan and E.T.A. Hoffmann. Danaë (2016–21) anchors the installation, fusing a representation of the vast interior of Tempelhof Airport in Berlin with the ancient Greek myth of Zeus transfigured into a shower of gold, leading to the prominent use of gold leaf in the painting. The storied site was built in an area belonging to the Knights Templar in the Middle Ages, opened as an airport complex in 1923, was developed extensively under the Third Reich, and played a critical role in the Berlin Airlift during the Cold War. Significantly, the decommissioned facility was recently used to provide temporary shelter for refugees, connecting it to the themes of Exodus. Other buildings represented in the paintings include Montecassino Abbey in Italy; Albert Speer’s Zeppelin Grandstand in Nuremberg, Germany; and Louis Kahn’s Institute of Management in Ahmedabad, India—all historically and culturally resonant structures.

In paintings such as Für E.T.A. HOFFMANN (2021), empty clothing attached to the surfaces stand in for human figures. Another group of paintings combines landscape elements with improvised vehicles—grocery carts, luggage dollies, and bicycles—that function as means of transport between realms. Laden with bundles, these objects recall their contemporary use by those who are displaced from home or seeking one, or by immigrants arriving in a new land, fleeing from war, oppression, and natural disasters.

In the works on view at Gagosian at Marciano Art Foundation in Los Angeles, Kiefer further elaborates themes of loss, history, and redemption. Exodus (2012–21) is demarcated between the lower register with a landscape of paint and straw affixed to the canvas, and a dynamic composition above that whirls in concentric circles, centering on clusters of forms that envelop a bicycle. The link between the terrestrial and the celestial carries through in the ladder between the two spheres in En Sof (2020–22), and the emanation of Wolkensäule (Column of Clouds) (2009–21). A suspended sculpture of a modern naval vessel stands in for the destruction of the pharaoh’s military in the narrative of the parting of the Red Sea found in Exodus, as recounted in the title of And with the blast of thy nostrils the waters were gathered together, the floods stood upright as a heap (2020).

Another pair of paintings on view in Los Angeles feature grounds of gold leaf, over which a cascade of mangled shopping carts and straw mats is suspended. In one, artist’s palettes and brushes are intermixed, conveying the symbolic weight and materiality that are central to Kiefer’s art making, as well as the transcendence of creative work and its ability to traverse between the earthly and the divine. These themes are shared by Phoenix (2018–19), a large sculpture of a winged palette composed of stainless steel and lead.