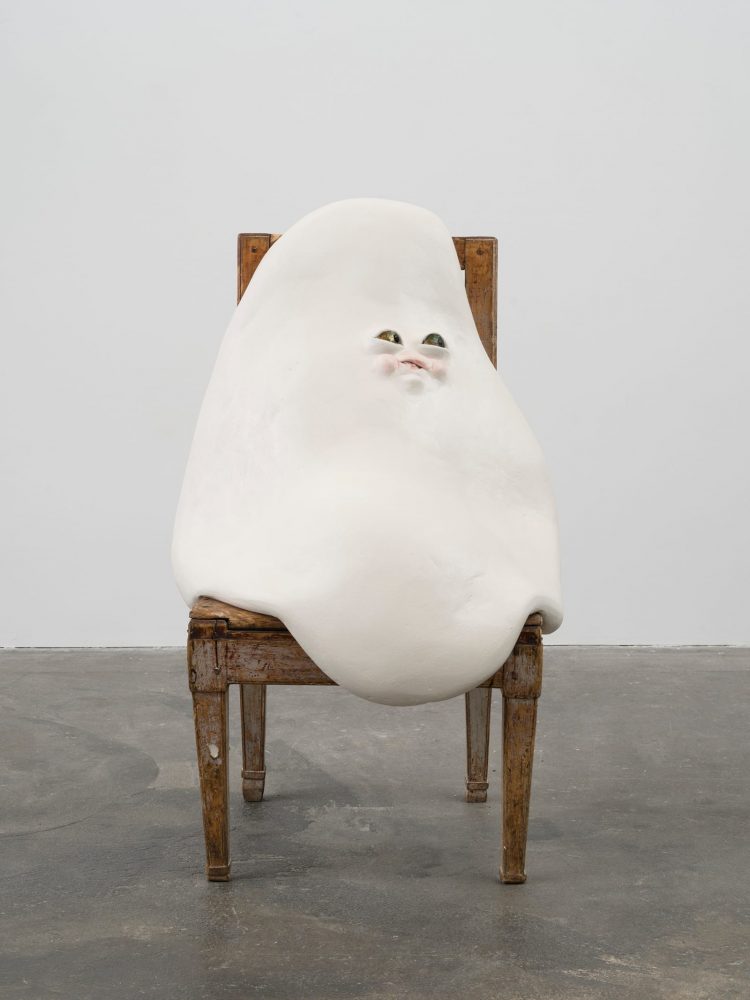 A Pancake Moon, through January 21, 2023, continues the artists’ engagement in visualizing complex psychological narratives of contemporary life through sculpture, stop-motion film, sound and immersive installations. Using anthropomorphic objects as a metaphor, the new animation and related sculptures reveal the full range of human emotions: anxiety, ecstasy, horror and joy, with a specific nod to the deeply transformational experience of motherhood.

Entering through a lollipop vortex, the viewer is transported into a dark forest-like landscape with surreal sculptural characters in various states of being. The aftermath of unknown events has littered the forest with these creatures, leaving psychological remnants alongside whimsical flora and fauna.

The forest, depicted as an abstract embodiment of both enchantment and terror, becomes the visceral landscape of the subconscious. Symbolizing life, sexuality, reproduction and rebirth – a human-like egg with flailing limbs becomes so round it cannot stand up. Later, we see it has morphed into a soft form, slowly slipping away as it loses all of its shape and determination. Deflated moons turn into flat pancakes. Struggling with exhaustion and loneliness, the push and pull of love and pain are explored throughout the exhibition.

In the new stop-motion animation, A Pancake Moon, a personified egg is curiously dancing through the forest. Following a dreamlike state of consciousness, the perfectly smooth egg meets a trio of mischievous animals who entice and seduce it. To escape the forest floor, the egg transforms into a moon and continues to dance along the skyline. Light and floating at first, it grows and grows until gravity finally gives way. After falling from the sky, the moon loses its shape and its sense of self. Ravaged and imperfect from trying to fulfill itself, the moon eventually becomes deflated and defeated. The sequence ends with a single egg alone in the forest, unhatched and waiting to emerge.

The relationship between mother and child has been investigated throughout art history and has been an important theme in Djurberg and Berg’s practice. In this new body of work, the artist’s contemporary perspective of child and mother has shifted now that Djurberg has become a mother. Fragments of personal narratives are revealed throughout the new body of work, playing out through a range of surrogates typically used by the artists – fairytale characters, animals, post-humans and stereotypes.

Berg, a musician and composer, adds yet another layer of emotional depth through sound. With his compositions, drama is either reinforced or awkwardly highlighted by contrasting the portrayed scene.

Working in an intuitive and curious mode, uninhibited by traditional methods of art making, Djurberg laboriously handcrafts elaborate environments and characters out of clay, plasticene, foam, wire, fabric and paint resulting in a gummy, flamboyant aesthetic. The visceral textures conveyed in Djurberg’s figures further elaborate the emotions provoked by their misdemeanors.

The artists’ collaborations have been exhibited widely around the world. In 2009, Djurberg & Berg presented their installation The Experiment at the 53rd Venice Biennial “Making Worlds” curated by Daniel Birnbaum where they were awarded the Silver Lion for Best Emerging Artists.