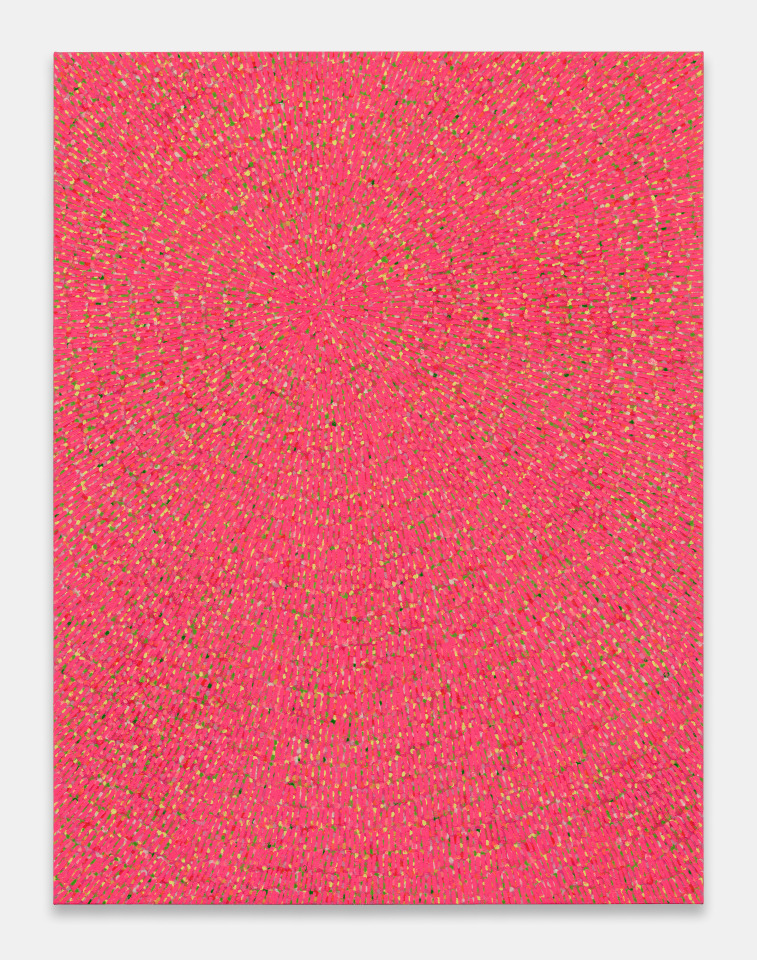 David Kordansky Gallery is presenting In the Heart of the Sun, an exhibition of new work by Jennifer Guidi at its Los Angeles gallery at 5130 W. Edgewood Pl. On view from November 5 through December 17, 2022, the show features paintings, works on paper, and sculptures. An opening reception will take place on Friday, November 4 from 6 to 8 PM.

Jennifer Guidi brings meditative vision, methodical practice, and a nuanced perceptual understanding of light, color, and landscape to works that are as immersive as they are finely detailed. Radiating networks of small marks, saturated hues, and tactile surfaces, generated through Guidi’s use of sand, have become characteristic components of a vocabulary in which an expansive sense of scale exists in large and small works alike. In the Heart of the Sun features a group of painted bronze sculptures installed in a rock-garden-like setting, new Universe Mandala and Sand Mandala paintings, and focused works on paper in which experiments with color and pattern reveal an endlessly shifting array of moods and inner vistas. Throughout the exhibition, Guidi shows how each individual mark, gesture, composition, and artwork—indeed, each observable phenomenon in the natural world—is part of an encompassing totality that is always in the process of creating itself anew.

Guidi’s approach is both methodical and fluid. Her works arise from a rigorous attention to process even as she makes space for emotion and intuition to suffuse each aspect of their making. The South gallery is dedicated to new sculptures, for instance, that begin as actual rocks and crystals before undergoing several stages of casting, enlargement, and painting. The early stages of their development require heightened precision as naturally occurring mineral forms are subjected to industrial transformation. Guidi then engages in an open-ended state of experimentation, applying colors and optical patterns that alter the way their bronze surfaces receive and reflect light, and revisits modes of feeling and non-linear observation that guided her to choose these particular forms in the first place. The installation of the finished works in a large rectangular garden of dark pebbles allows viewers to encounter them with a sense of spaciousness, and to reflect on ways in which particles—whether grains of sand, dots of paint, or actual pebbles—come together to constitute unified visual fields.

Each of the Universe Mandala paintings on view in the North gallery also foreground relationships between the whole and its parts. Characterized by notable painterliness and a balance between order and organic freedom, these works are the results of several additions Guidi has made to her technical repertoire. They are made with the canvas hanging on the wall, rather than on the floor, using handheld brushes as opposed to the stick-mounted ones she sometimes employs. Sand frequently plays an important textural role in the ground that supports subsequent gestures, though in the new Universe Mandalas, Guidi cultivates a lightness of touch that evokes a broadened array of light- and color-based effects, as well as an associated range of other naturally occurring phenomena, like the movement of air through plants and flowers, or the way the sun reflects off rippling water at different times of day.

As the exhibition’s title suggests, Guidi is interested not only in the centrality of light in painting, but also in exploring how the center of any given experience can be defined. If each sculpture, painting, and work on paper in the show represents its own light-emitting center, so, too, each mark or each shift in hue can be seen as a center around which every other element can be said to orbit. The works on paper in particular find Guidi focusing on intimate compositions that constitute both discrete worlds and units of an expansive, overarching solar system of images. Here too, marks arranged in mandala-like patterns orient the gaze while complex combinations of colors and surprising foreground-background relationships resist easy categorization. As viewers move from one work to the next, the familiar and the new appear to repeatedly exchange places.

This effect can be found throughout In the Heart of the Sun, which functions in many ways as a single immersive statement. Major new Sand Mandala paintings on view, however, serve as reminders that individual works are themselves immersive experiences in which perception of the world can be transformed. In one large-scale work, over six feet tall and twelve feet wide, Guidi has placed an encompassing white rectangle—one that echoes the format of the black rock garden in the adjacent gallery—atop a prismatic field of color whose rainbow-like luminosity becomes a vivid frame. Unlike the majority of her previous mandala works, in which the mandala’s center can be found to the upper left of center, here the geometrical center of the canvas is the point from which the indented marks radiate. Metaphorical possibilities abound as light is shown to be the heart of color, and color emerges as a life-giving symbol for feeling, imagination, and change.