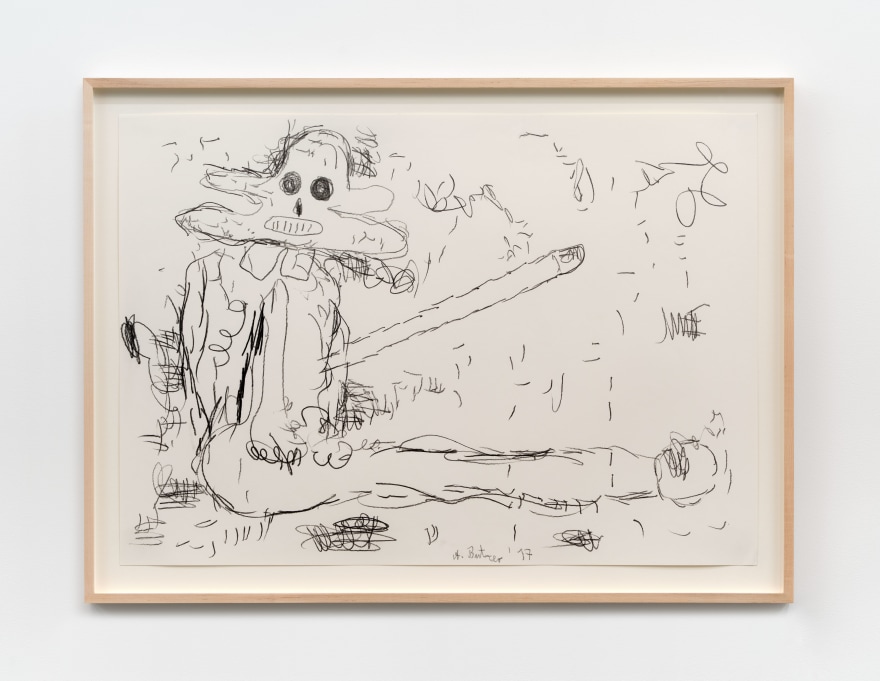 Nino Mier Gallery has announced a series of three concurrent solo exhibitions by André Butzer (b. 1973 in Stuttgart, Germany) alongside a joint exhibition by Jayme Burtis (b. 1969 in Los Angeles, CA) and Butzer. Paintings and works on paper by Butzer will span Galleries 1, 2, and 4 at our West Hollywood locations from November 5, 2022 – January 7, 2023, while Burtis’ and Butzer’s double show will be on view in Glassell Park from November 6, 2022 – January 7, 2023.

The figure of the Wanderer is at the center of Vaterländischer Gesang: Friedrich Hölderlin, in one monumental oil painting from 2016 and a series of five, delicate pencil drawings. In each composition, the Wanderer sits with his legs extended in front of him, so that his body forms a right angle mirroring the elemental pictorial directions.

His head faces the viewer, teeth bared, eyes barren, and extends his left arm in front of him, possibly recalling either a Nazi salute, an erect phallus or just a farewell wave of the hand. The Wanderer’s tense, seated body undercuts the fascistic ideal of a muscular, self-possessed posture, while his contorted facial features recall the expressions both of Edvard Munch’s and Walt Disney’s protagonists. On paper, the Wanderer’s form disintegrates into a series of violent, jagged marks—as though the troublesome histories enshrined in its character are vehemently revealed and laid bare.

The Wanderer, however, does not just signify Germany’s fraught past. Rather, it embodies a fundamental state of universal homelessness, also familiar to the artist. Particularly, as the title references German poet Friedrich Hölderlin, whose epistolary novel Hyperion has ever since been a most important touchstone for Butzer. Thus, the sitting figure could also be a portrait of the singing poet Hölderlin, conveying the “yearning search for a peaceful existence.”

André Butzer was born in Stuttgart, Germany, in 1973 and lives in Berlin-Wannsee.