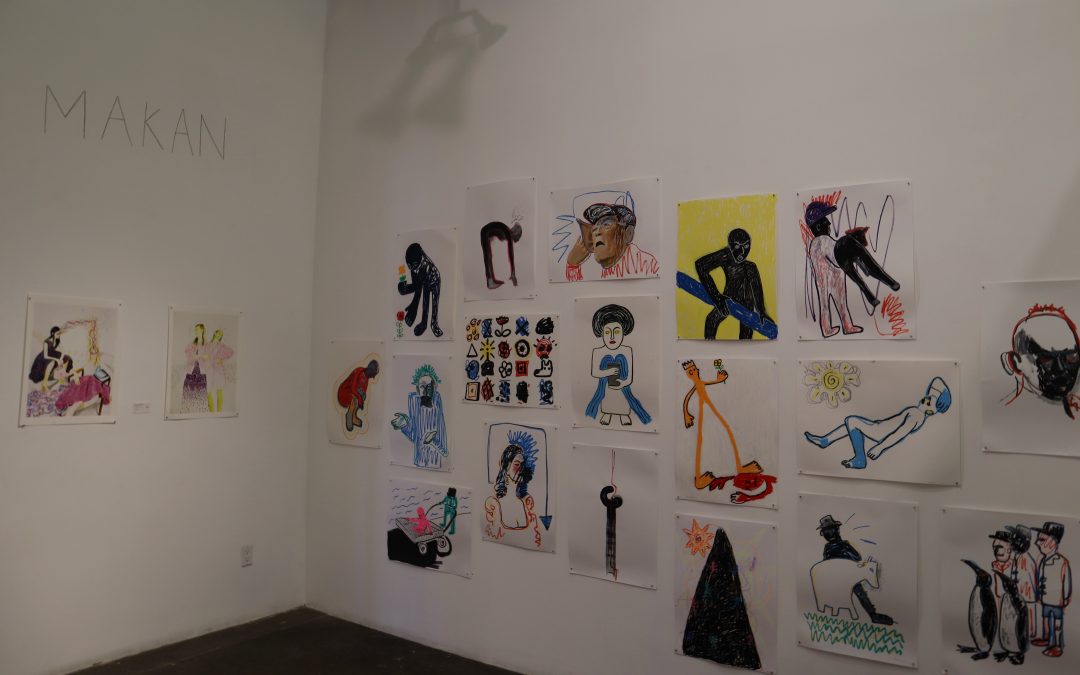 Makan Negahban is an artist who paints with unbridled emotion. In his solo show Collisions, currently on view at Lois Lambert Gallery, a profusion of figurative paintings on unstretched canvas line the gallery walls, emitting, if that’s possible, ferocity. Many are set against black backgrounds, as part of a series Negahban calls The Black paintings, causing the figures to protrude. Indeed, there seem to be collisions of all sorts occurring between various human forms and the ambiguous environments they inhabit.

While much of Negahban’s imagery creates an unnerving, often severe effect, he claims to have no association with his depictions, which arise instead from an unfiltered, stream of consciousness approach. There is an array of expressions conveyed through these imaginary characters, including retribution, confusion, introspection, and indifference, serving as testament to our complicated existence. 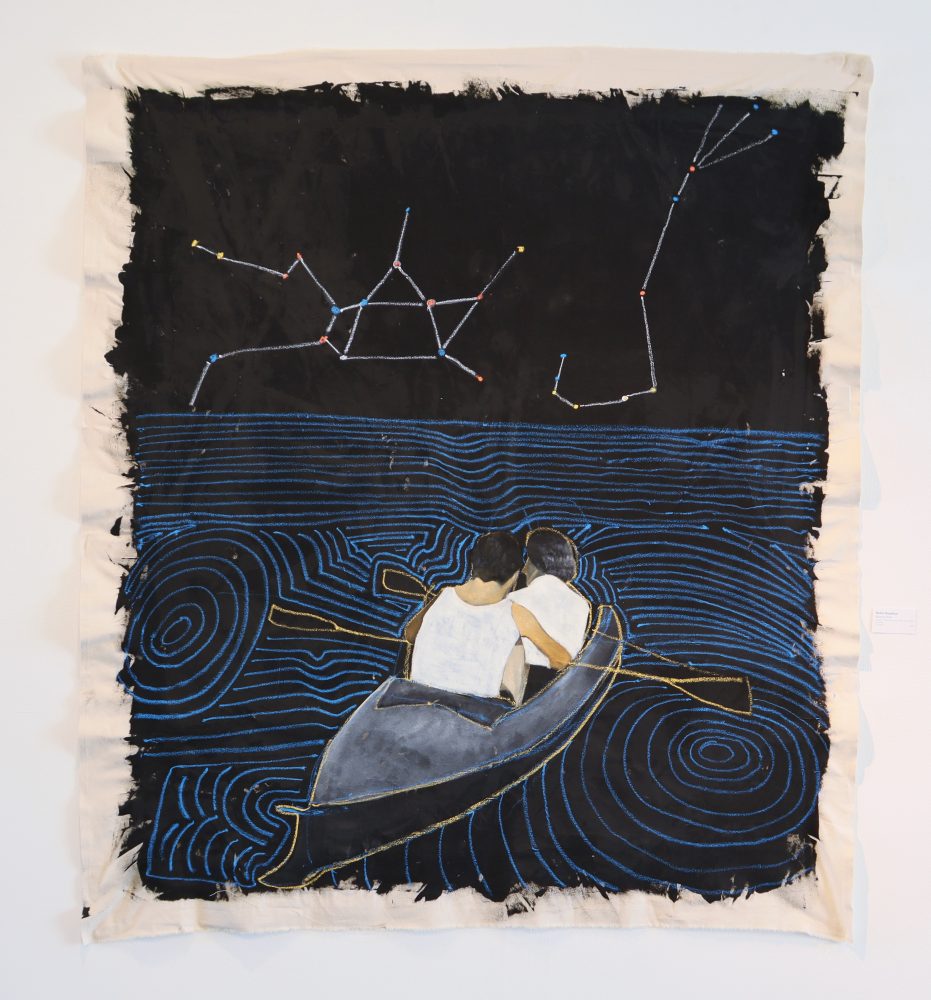 Working with collage, crackle paste, pigment sticks, acrylic inks and oils, Negahban has a multi-faceted style that possesses an outsider vibe, with partially rendered subjects trailing off into rudimentary doodles. Adding to this complexity are reccurring tones of militant muscularity, contrasted with an atmosphere of dreamy femininity, consequently spanning the blemished spectrum of human emotion.

In Go, we witness a wave of male bodies lunging, in an arch-like fashion, across an indistinguishable ocean. There is a feeling of urgency in reaching an invisible finish line, yet it isn’t clear whether they are in competition with one another, or whether the objective is a collective concern. This conglomeration includes forms that are partially opaque with flesh tones, and some merely outlined in blue and red scribbles, the fleeting delineation of their form communicating a sense of inescapable transience. 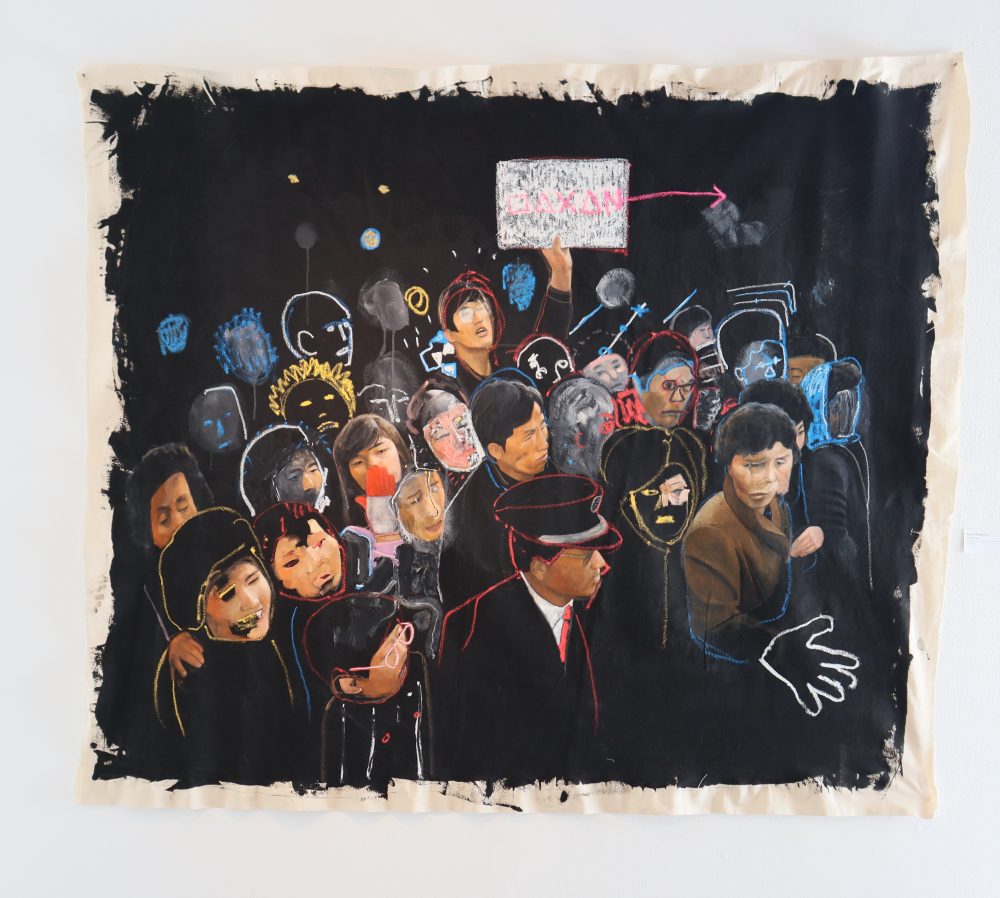 With a B.A. in Psychology and Social Behavior, Negahban intrigues, human nature unraveling within his works. Perhaps these paintings are his own experiment in terms of how individual and collective, emotional responses collide in social situations.

Taken shows another dramatic occurrence: A man is evidently being seized by a clan of contemptuous authority figures. Clueing us into the notion that the main subject is undeserving of the verdict given him is his horror-filled facial expression and the dainty halo crowning his head. The fact that the prisoner is completely nude further emphasizes a feeling of humiliation amid public chastisement. 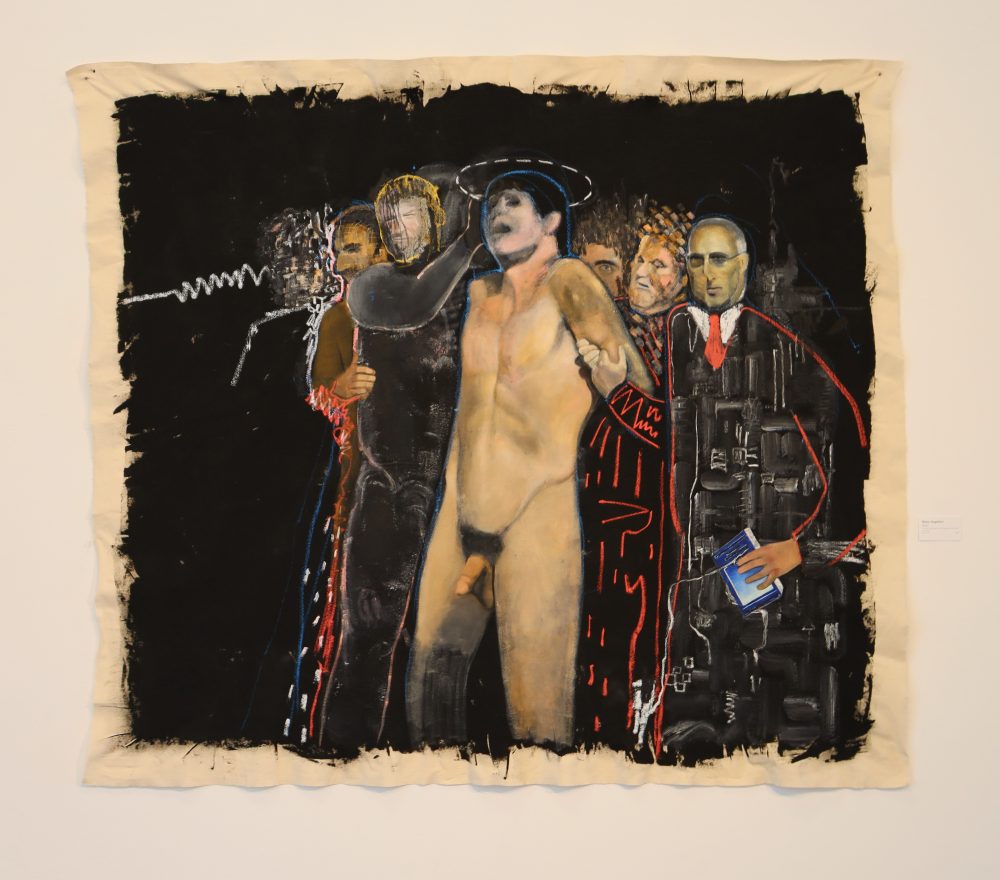 Other works, such as Boating Party, diverge from brutality and place us in calmer waters. This scene depicts a couple rowing towards a night sky visibly marked with constellations, and are seemingly in no hurry to determine the fate of their nocturnal journey. 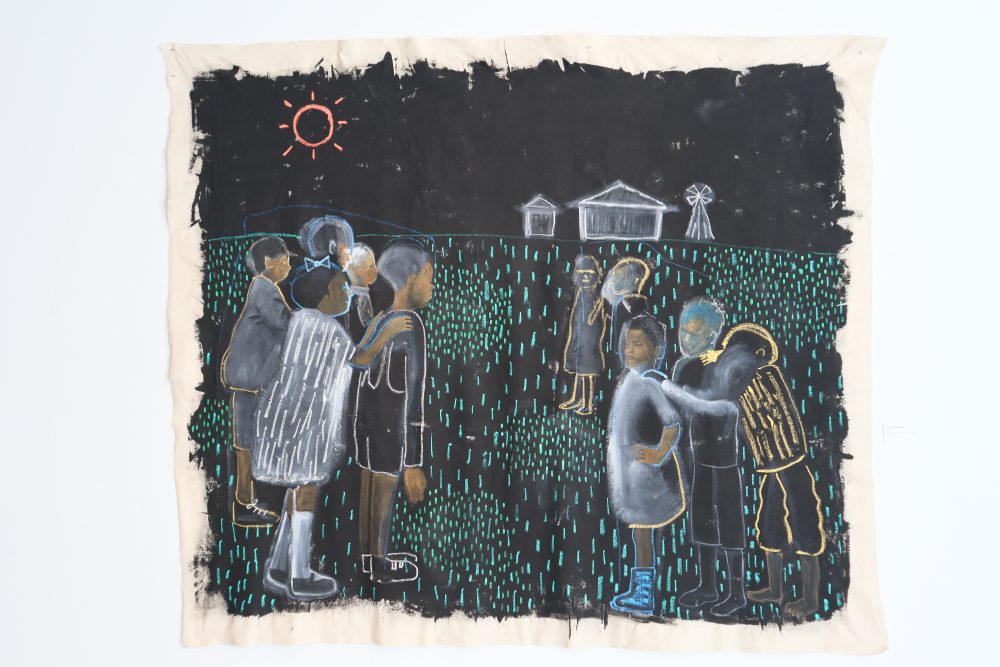 Rather than ascribing to orthodox methods of expression, Negahban has achieved something that many artists aspire to: that state of inhibition, in which one allows internal impulses to direct the brush. While his painting skills are advanced, he has managed to free himself from the restrictions of classical form by delving into a wilderness of sensation. As Negahban demonstrates, in times of confusion, it’s sometimes best to turn off our analytical minds and simply feel.