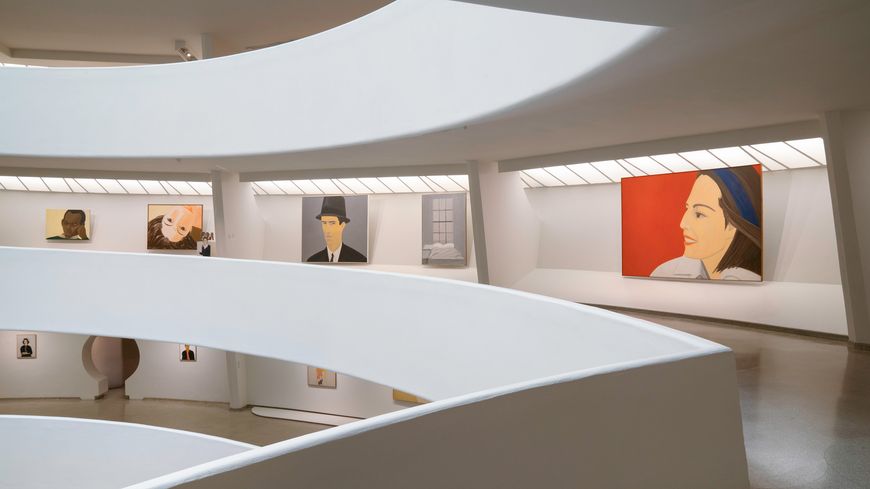 The Solomon R. Guggenheim Museum presents Alex Katz: Gathering, a career retrospective staged in the city where Katz has lived and worked his entire life, and prepared with the close collaboration of the artist. On view from October 21, 2022, through February 20, 2023, the exhibition fills the museum’s Frank Lloyd Wright–designed rotunda and an adjacent Tower Gallery. Encompassing paintings, oil sketches, collages, prints, and freestanding “cutout” works, the show opens with the artist’s intimate sketches of riders on the New York City subway from his student days in the 1940s and culminates in the rapturous and immersive landscapes that have dominated his output in recent years.

Across eight decades of intense creative production, Alex Katz (b. 1927, Brooklyn, New York) has sought to capture visual experience in the present tense. Writing in 1961, Katz noted that “Eternity exists in minutes of absolute awareness. Painting, when successful, seems to be a synthetic reflection of this condition.” Whether evoking a glancing exchange between friends or a shaft of light filtered through trees, he has aimed to create a record of “quick things passing,” compressing the flux of everyday life into a vivid burst of optical perception.

Emerging as an artist in the mid-20th century, Katz forged a mode of figurative painting that fused the energy and distillation of Abstract Expressionist canvases with the American vernaculars of the magazine, billboard, and movie screen. He has turned to his direct surroundings in downtown New York City and coastal Maine as his primary subject matter throughout his career, engaging the traditional painterly subjects of portraiture, genre scenes of everyday life, and landscape.

The exhibition’s title, Gathering, references the study of the visible world evoked in the 1951 poem “Salute” by Katz’s admired friend James Schuyler. Equally, it summons the notion of a lifetime of work assembled within the structure of a retrospective, and the gathering of Katz’s sitters within the uniquely open space of the rotunda. Whether depicting individuals or social groups, Katz’s portraits document an evolving community of poets, artists, dancers, musicians, and critics who have animated a downtown avant-garde since the midcentury, including Frank O’Hara, Robert Rauschenberg, Paul Taylor, LeRoi Jones (later Amiri Baraka), Joe Brainard, Kynaston McShine, Anne Waldman, John Ashbery, Meredith Monk, Allen Ginsberg, Mariko Mori, Bill T. Jones, and Joan Jonas. A number of portrait subjects recur in the course of the loosely chronological installation, most notably Ada Katz, the accomplished research biologist and Fulbright scholar whom the artist married in 1958 and has depicted over a thousand times since. Described by the poet Frank O’Hara as “a presence and at the same time a pictorial conceit of style,” Ada functions as the iconographic heart of Katz’s work, a physiognomy and a subjectivity studied across the arc of both the subject’s individual life and the artist’s creative development.