59th Venice Biennale: ‘The Milk of Dreams’
An Invitation to Look, See, Dream and Reflect 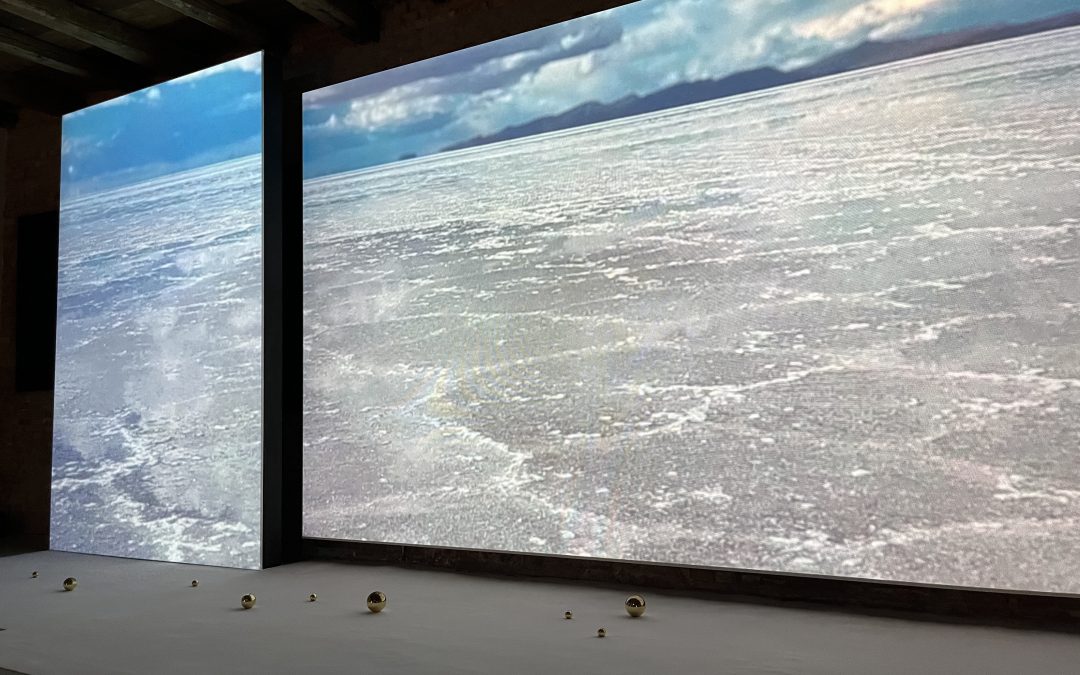 The Milk of Dreams

The graphic identity for The 59th Venice Biennale (April 25 – November 27, 2022) is an image of eyes. The title The Milk of Dreams is taken from a book by Leonora Carrington and the ever-present exhibition posters feature close cropped faces with a focus on the eyes that come from paintings by Belkis Ayón, Felipe Baeza, Tatsuo Ikeda and Cecilia Vicuña. This is an invitation to look and to see— to dream and to reflect. 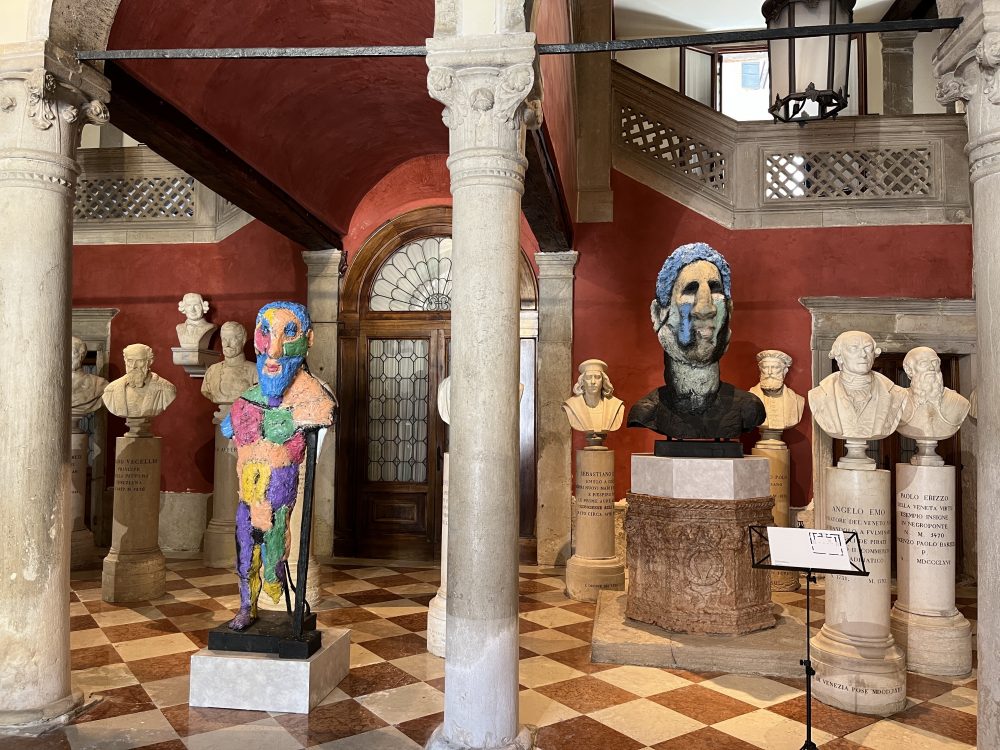 What is so special about the Venice Biennale is that it takes place in the magical city of Venice, and while much of the attention and publicity for the show centers on the official exhibits at the Arsenale and the Giardini, many ad hoc spaces are also used. Some are magnificent palazzos while others are funky dilapidated spaces. To view all of the art is probably an impossible task. Sitting through long single-channel videos or video installations, as always, poses a conundrum. In four or five days, it is possible to see many of the venues on the main island. A few more days are required to see what extends a boat ride away. One of the joys of the experience is happening upon something unexpected that resonates in meaningful ways.

My journey began with collateral events. Highlights from day one include the magnificent Pavilion of Kazakhstan featuring work by the collective ORTA that is a “multi-media sci-fi research center based on the ideas of the artist, inventor, writer, and “urban madman” Sergey Kalmykov —who died in complete obscurity in Almaty in 1967— but who inspired generations of contemporary artists in the region.” The darkened space is filled with “rusting robots, embroidered memory drives, foil reflectors, and a monumental cardboard and light generator,” a compelling mixture of high and mostly low tech. 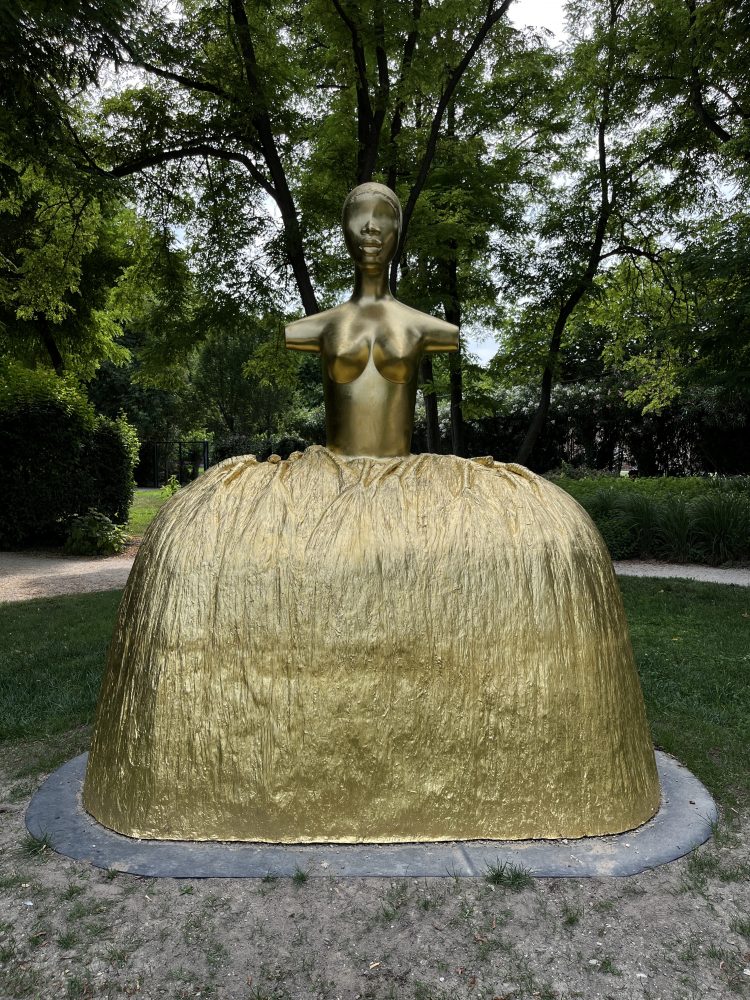 Another exhibition that resonated was the Pavilion of the Ivory Coast and its presentation The Dreams of a Story, a group exhibition with works by Frédéric Bruly Bouabré, Abdoulaye Diarrassouba dit Aboudia, Armand Boua, Saint-Etienne Yéanzi dit Yeanzi, Laetitia Ky and Aron Demetz. It was a real treat to see pieces by Bruly Bouabré, who was recently featured in a show at the Museum of Modern Art in New York City, as well as to be introduced to the provocative photographs and videos by Ky, who documents sculptures created with the hair on her head. Off the beaten path was an exhibition featuring Stanley Whitney that showed paintings he made while living in Italy, and a funky installation of paintings and sculptures by Markus Lupertz at Palazzo Loredan (Istituto Veneto di Scienze, Lettere ed Arti). 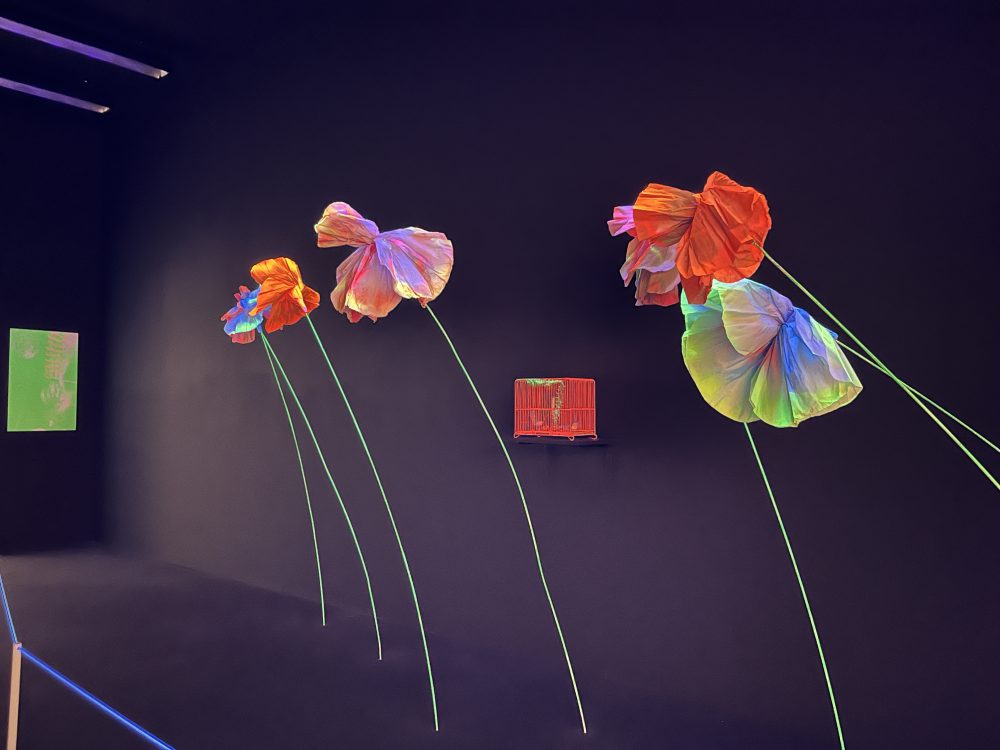 Flowers from Garden of the Metamorphosis in the Space Capsule, Tetsumi Kudo

Day two was the Giardini, where the international pavilions are situated. The Italian or Central Pavilion is always the host of the curated exhibition and a good place to begin. Here, curator Cecilia Alemani installed one segment of her poignant exhibit The Milk of Dreams. As always, this is a large group show with numerous artists. The surprise of 2022 was the predominance of women. Another unusual departure was the inclusion of mini-historical sections organized by themes —The Witches Cradle, Corps Orbite, Technologies of Enchantment— and filled with mostly older and historical, yet under-recognized female artists from all over the world, both alive and deceased. An enriching experience, it was, nevertheless, a bit exhausting and overwhelming. 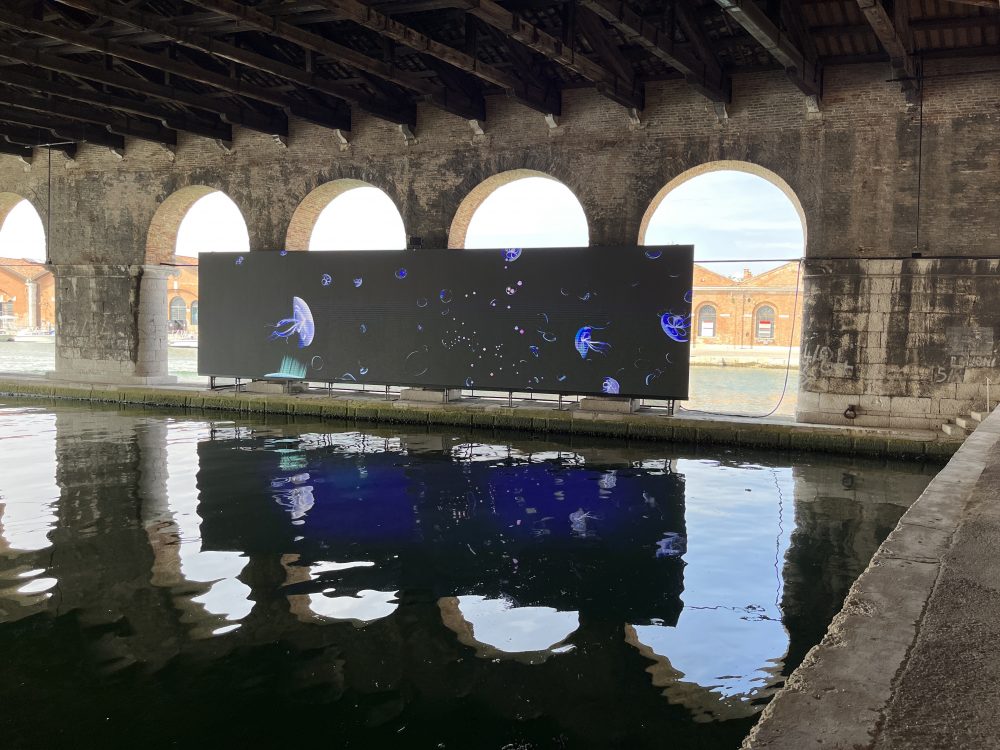 Moving from the “central” pavilion to the national pavilions, my greatest hits include: Simone Leigh representing the United States— a real crowd pleaser. Her installation Sovereignty, transforms the U.S. Pavilion into an “African thatched hut” in front of which stands a 24-foot tall bronze female form entitled Satellite.

Other stand-outs include: Ignasi Aballi who shifts the axis of the Spanish Pavilion, paralleling the given architecture with new walls that become a subtle and seemingly empty space filled with light and shadow. The installation Feeling Her Way, by Great Britain’s Sonia Boyce, focuses on the vocal performances of five Black female musicians. The pavilion is filled with colorfully designed and patterned wallpaper juxtaposed with video documentation of the vocal performances. 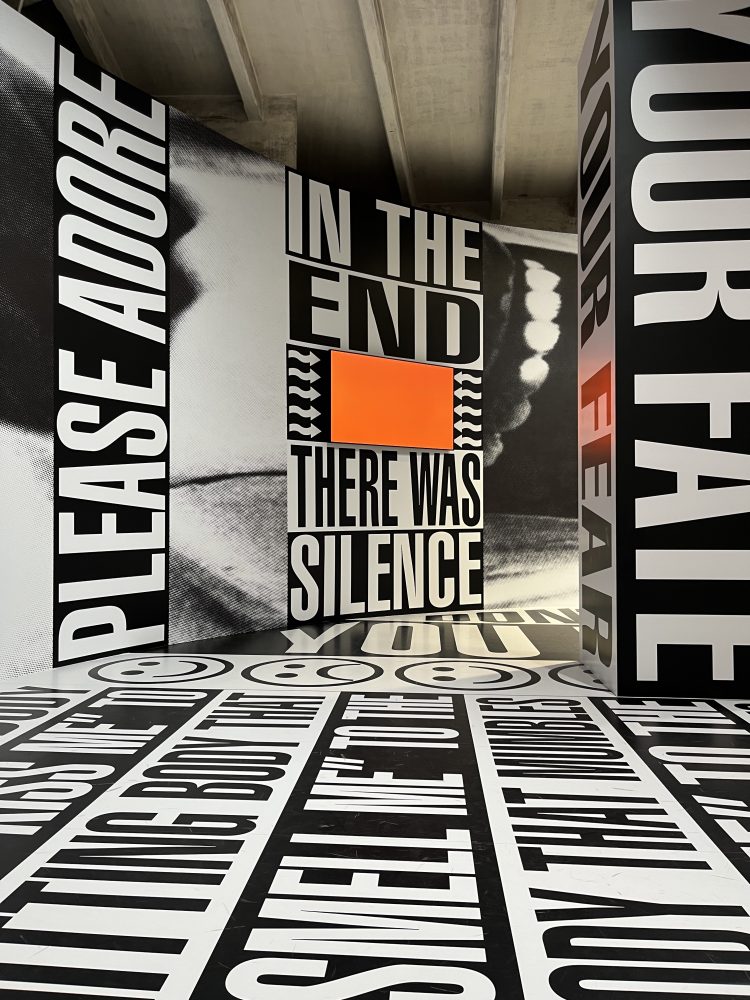 Francis Alys‘ Belgium Pavilion is a cacophony of overlapping voices and projections of children from all over the world at play. In The Nature of The Game, Alys documents different types of childrens’ games and records the innocence of youth engaged in play, regardless of the sometimes dire situations that may surround them. The installation is a delightful presentation of hope in contrast to these war/plague-filled times.

The collective Dumb Type consists of artists, programmers and musicians. In their installation in the Japan Pavilion, they surround viewers with snippets of projected red text from a 1850’s geography textbook that rotates around the darkened room in concert with the sounds of voices reading.

Day three started with Planet B: Climate Change and the New Sublime, a group show upstairs in a plain looking building that turned out to have an amazing interior space with arched windows and high ceilings. A highly decorative site-specific wall mural by Haegue Yang filled the space and beautifully complemented Max Hooper Schneider’s baroque sculpture. 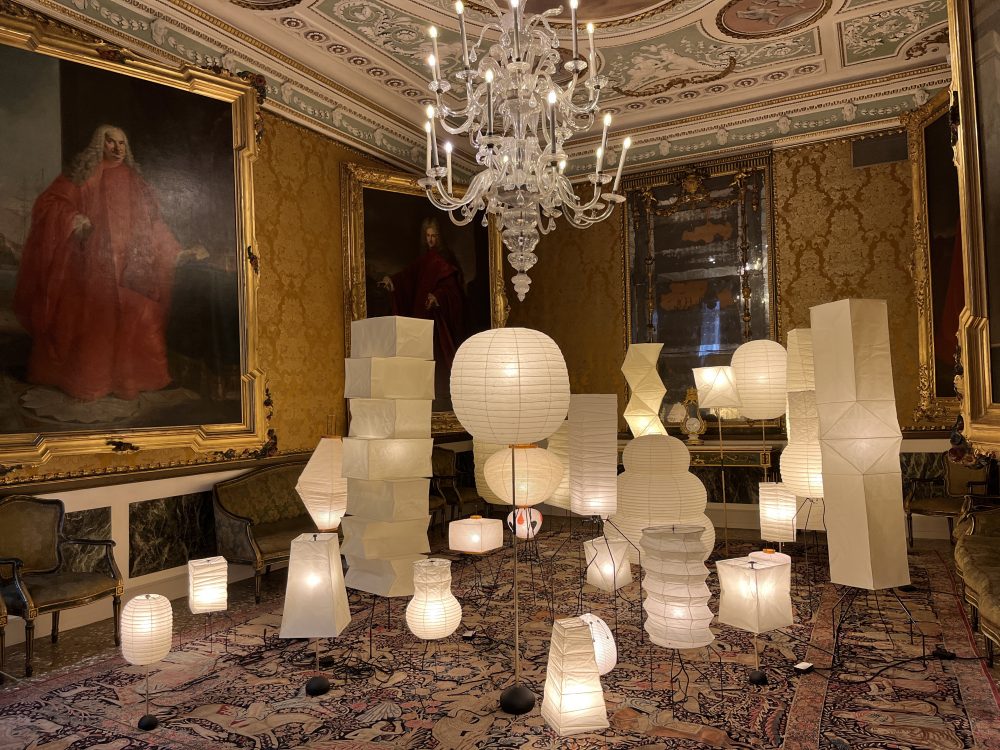 Next stop was the Arsenale. A few international pavilions are located within the Arsenale, as well as the second and larger part of the “curated exhibition.” Many artists have works in both curated shows allowing for different contexts: for example, Simone Leigh is represented by large works in both venues. Small gems are easily overlooked like Luiz Roque‘s short film Urubu, featuring footage depicting a bird in flight, soaring amidst the cityscape of Sao Paulo, as well as Ibrahim el-salahi‘s small-scale, delicate and intimate drawings made during the pandemic, Tetsumi Kudo‘s Flowers from Garden of the Metamorphosis in the Space Capsule — artificial flowers bathed in fluorescent light. Technology driven works about AI, cyborgs and machine learning are present in the DIY sculptures created by Geumhyung Jeong, as well as Tishan Hsu’s mixed media pieces that question the relationship between humans and technology.

Barbara Kruger filled the space at the end of the first section with one of her iconic text and image installations. The decision to sit through a lengthy video is always hard as time feels precious and limited. Lynn Hershman Leeson‘s video Logic Paralyzes the Heart is about a sixty-one-year-old cyborg played by the actress and filmmaker Joan Chen, who is reconsidering the trajectory of her life. This was a must see and thoughtful analysis of the future. 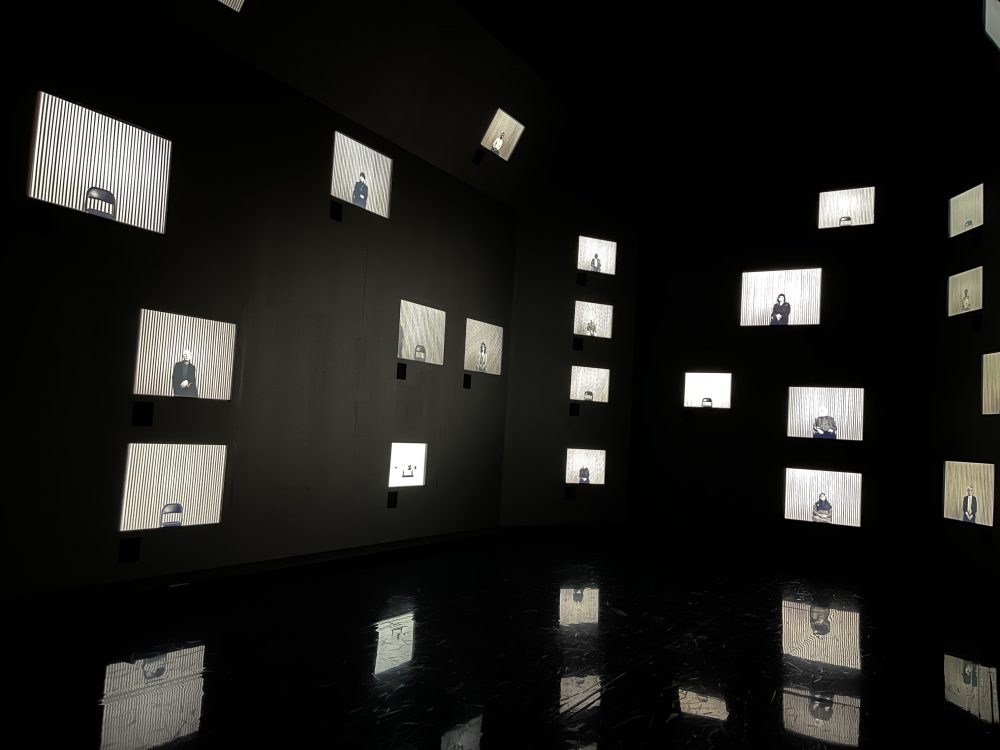 Among the hits of the national pavilions within the Arsenale were Monica Heller representing Argentina, who wowed audiences with an immersive installation of projections. The Importance of the Origin will be imported by the origin of the substance” and narrated by an animated bird; Fusun Onur, representing Turkey; Into the Light, a group show of artists from South Africa featuring works by Lebohang Kganye, Phumulani Ntuli and Roger Ballen; as well as the large-scale paintings by Tina Gillen of Luxembourg. Saudi Arabia presented a room-sized sculpture by Muhannad Shono, a giant mixed media tree that extends across the floor of the space.

Outside the Arsenale but still on the grounds around the water in the dock area was a huge video installation on a bright LED screen by Wu Tsang. The six-hour loop, Of Whales uses Moby Dick as a point of departure for a poetic meditation on the ocean, based on the whale’s perspective. At the far back end of the grounds, one happens upon a glistening gold sculpture by Simone Leigh in the quiet of a natural setting.

Not too far from the back exit of the Arsenale is Lita Albuquerque‘s compelling installation Liquid Light that features the two-channel projection of a film about the imagined journey of a female astronaut from another planet (portrayed by the artist’s daughter, Jasmine Albuquerque Croissant). Filmed on location in and capturing the astonishing landscapes of Bolivia, the work sheds light on climate change and the transitioning aspects of the planet. The film is presented in conjunction with Albuquerque’s sumptuous signature gold leaf paintings and sculptures. 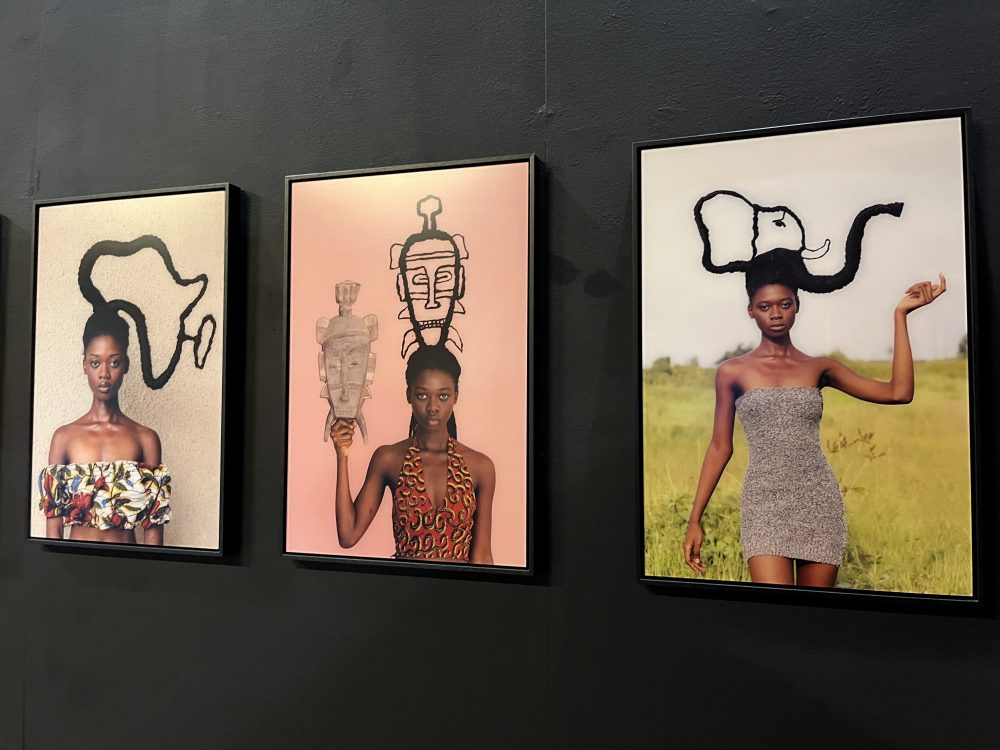 Highlights of the 2022 Venice Biennale were the many of the collateral events which included Bruce Nauman‘s Contrapposto Studies at the Punta Della Dogana; The Soul Expanding Ocean installation by Dineo Seshee Bopape and Diana Policarpo at Chiesa San Lorenzo; Mary Weatherford‘s The Flaying of Marysas and Georg Baselitz‘s, Archinto at Museo di Palazzo Grimani and the inspired exhibition at Fondazione Querini Stampalia curated by Danh Vo and featuring works by Vo, Isamu Noguchi and Park Seo-Bo. Also not to be missed was Human Brains at the Fondazione Prada, an historical exhibition that focuses on the history of studies on the brain, as well as Leila Alaoui‘s photographic work, Storie invisibili/Unseen stories, installed in the vast interior space of the Fondaco dei Tedeschi, now a shopping center. 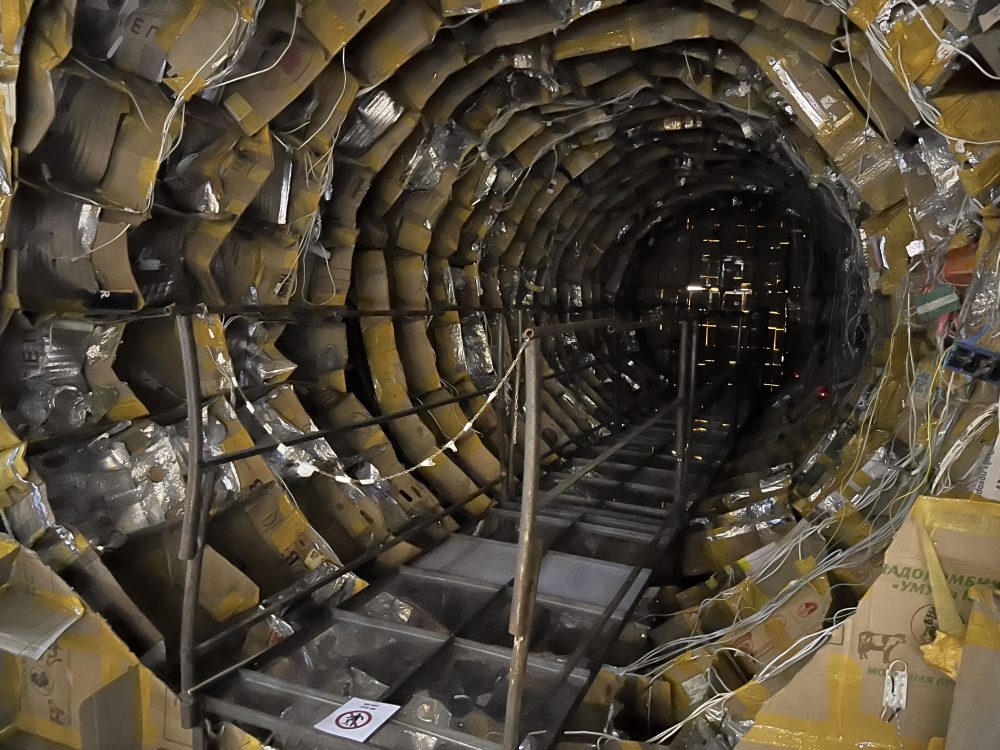 It is impossible to quantify the experience of the Biennale and to deem this or that artist or exhibition as the best. Every viewer has their own agenda and tolerance. Many come to Venice to experience the event as a whole. The joy of the Biennale for me is Venice, criss-crossing canals, eating gelato, getting to go inside fabulous old buildings with exotic chandeliers and to experience the history of the city and its architecture. I enjoy the mix of new and old: to see paintings by Tintoretto, Carpaccio, Bellini or Titian and then to take in an exhibition of NFTs is one of the fantastic contradictions of the Biennale. Of course, there is work about politics, climate change, disasters and global suffering. There are also beautiful paintings, compelling videos and site-specific sculptures. What one retains and the extent to which one is moved by what one sees is often fleeting. Revisiting the experience in pictures helps, but really, the power of the 2022 Biennale, like its title proclaims, is to look and to see— to dream and to reflect.