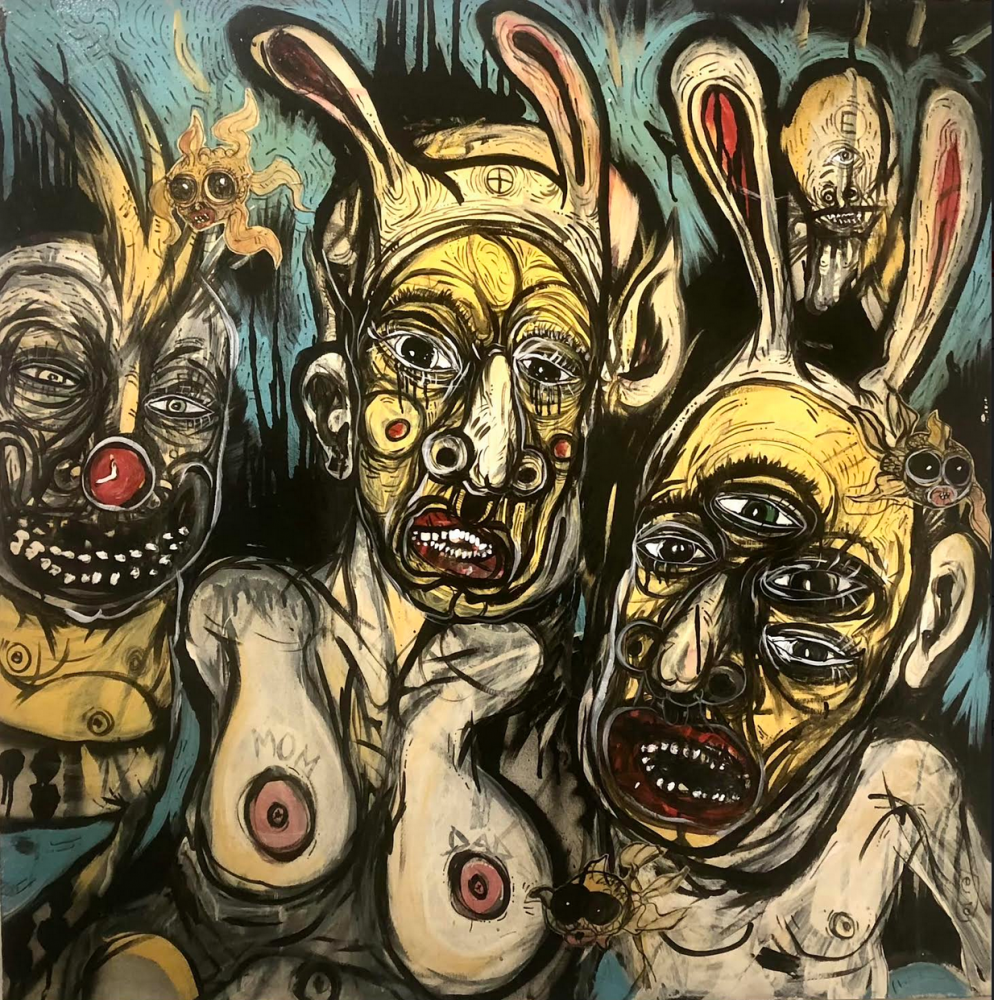 Mark Brosmer’s fascinating dreamscapes depict a world where the real and unreal fill the canvas equally. Brosmer is an artist whose work consciously reflects the elements of earth, air and water. The simplicity of each work is expressed with and encourages the viewer to explore visual puzzles. “My work lives in a silent environment where time fails to exist, where focus is shared between symbols and their surrounding areas.”

Michele Castagnetti uses familiar iconography, branding, and humor to comment on American consumerism. He creates playful, tongue-in-cheek narratives that challenge the viewer to question prevailing norms.  Castagnetti is an Italian transplant and he finds America inspiring for artists because of the many paradoxes in American culture.  As Castagnetti says, “you’ll have a homeless man passed out next to a Lamborghini.” It’s a land of extremes that gives Castagnetti fuel for his artistic commentaries.

Edem Elesh is an internationally recognized talent. He acknowledges the aleatory element in his luscious, earthy, mixed media experimentation. “I am interested in examining the miracle of everyday existence. My goal is to create a visceral response from the viewer; I achieve this through the use of visual “triggers”, representational queues that act as metaphors for the individual pieces’ concepts. I use tar as a primordial “earthy” medium. The end result is, hopefully, an entirely unique approach to the practice of contemporary art.”

Gronk is easily one of the most recognized LA Chicano painters – and yet he remains a mysterious and mercurial figure. Growing up in East Los Angeles amid poverty and police riots, Gronk became an autodidact whose critical interests included art cinema, modernist theater, and campy B-movies, along with a wide array of philosophers, theorists, and writers. Also described as a co-founder of the Chicano conceptual art group Asco, Gronk’s work is a “hybrid voice that speaks in many artistic tongues”.

Tanner Goldbeck delights in imperfections, celebrating what’s broken and revitalizing the bland.  Although he is a painter first and foremost, he has a long history in illustration and commercial art.  He originally kept these disciplines separate from his painting but gradually they become integral parts of a unified process. His work exhibits a true love for clean lines, sharp detail and a sense of order while also finding energy and inspiration in the chaos of misprints and blemishes. By dismantling earlier works and recombining them into larger paintings, every line revisited still holds a personal history and a memory.

Kathe Madrigal began her artistic career specializing in Trompe l’oeil and large scale murals and eventually she was hired to create numerous commissions and public art murals with grants from major Los Angeles corporations. Her early work had references to nature and/or the cyclical process of life but her later pieces have become purely abstract, commenting on life in between the darkness from which we are born and that we all return to. Energy organizes and disperses itself constantly preventing any such idea of permanence. It ends with a piece that puts two opposing ideas together creating a singular voice of beauty and structure.

Antonio Mendoza (mrtamale, www.subculture.com) has exhibited work and/or performed around the world.  His work ranges from abstract collages to digital projections, classically inspired oil paintings, prints, interactive web pages, lenticular collages, live video, and video installations. The work presented at Gloria Delson Contemporary Arts is a compilation of the detritus of daily life, passed through a blender, and reconfigured by an algorithm that is being difficult.

Bill Sherwood is a Canadian transplant whose innovative reverse painting is a mixed media process that explores the dynamics of light, shadow, and color when channeled through his chosen medium of plexiglass. His goals are to push the boundaries of art and the play of light, shadow, and color when transmuted through a clear yet charismatic surface. “Chasing Momentum as a painter, is a relationship on uneven terms with the canvas I have chosen.