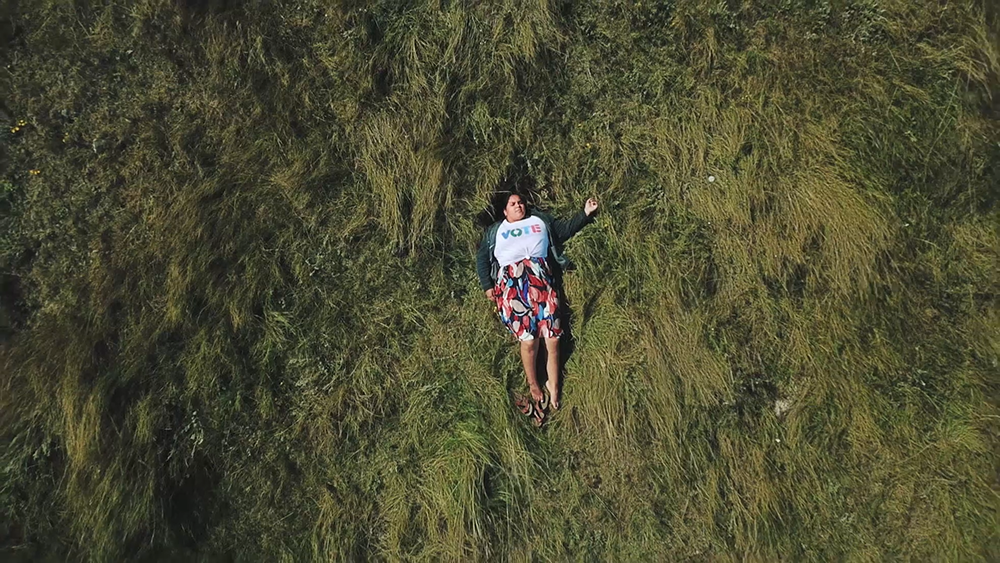 Andrea Bowers is an artist and activist who has the uncanny ability to make sophisticated, beautiful and visually engaging artworks that communicate her involvement with and dedication to a wide range of social and political issues. The exhibition Andrea Bowers at the Hammer Museum is a twenty-year survey that presents selected projects from her expansive and prolific career. The installation, organized by theme rather than chronologically, is a thoughtful presentation of more than sixty core works in a range of media— drawing, installation, sculpture, neon and video. The exhibition opened on the heels of the repeal of Roe v. Wade and several neon wall works celebrating women’s rights, including My/Her Body My/Her Choice, 2017 and Empower(ed) Women, 2019, reiterate the dire consequences of this decision. 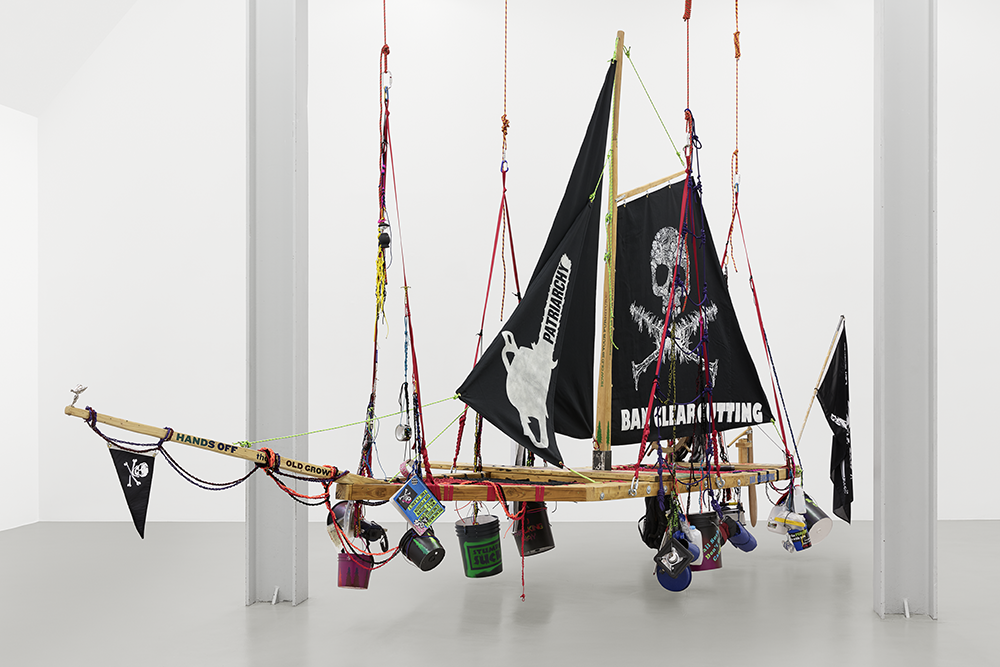 While the exhibition presents selections of the various materials Bowers has engaged with over the years, drawing is at the root of her practice. She has a deft hand and the ability to reproduce photographic images in graphite and colored pencil in ways that convey a sense of urgency and emotion. The figures are usually isolated protesters holding signs in the midst of a large empty white ground.   A number of these drawings dot the exhibition. Included is the four-part Study from May Day March Los Angeles 2010 (Europeans Remember MayFlower Ship?), (Immigrant School Teacher), (Mexico), (My Parents are No Criminals) as well as For My Transgender Sisters (May Day March, Los Angeles, 2012), all titled after the signs held or the slogans on the individual’s clothing. These drawings function as punctuation and are often hung between larger, more expansive pieces. They offer a through-line, connecting the many struggles and causes that Bowers has been involved with over the years. 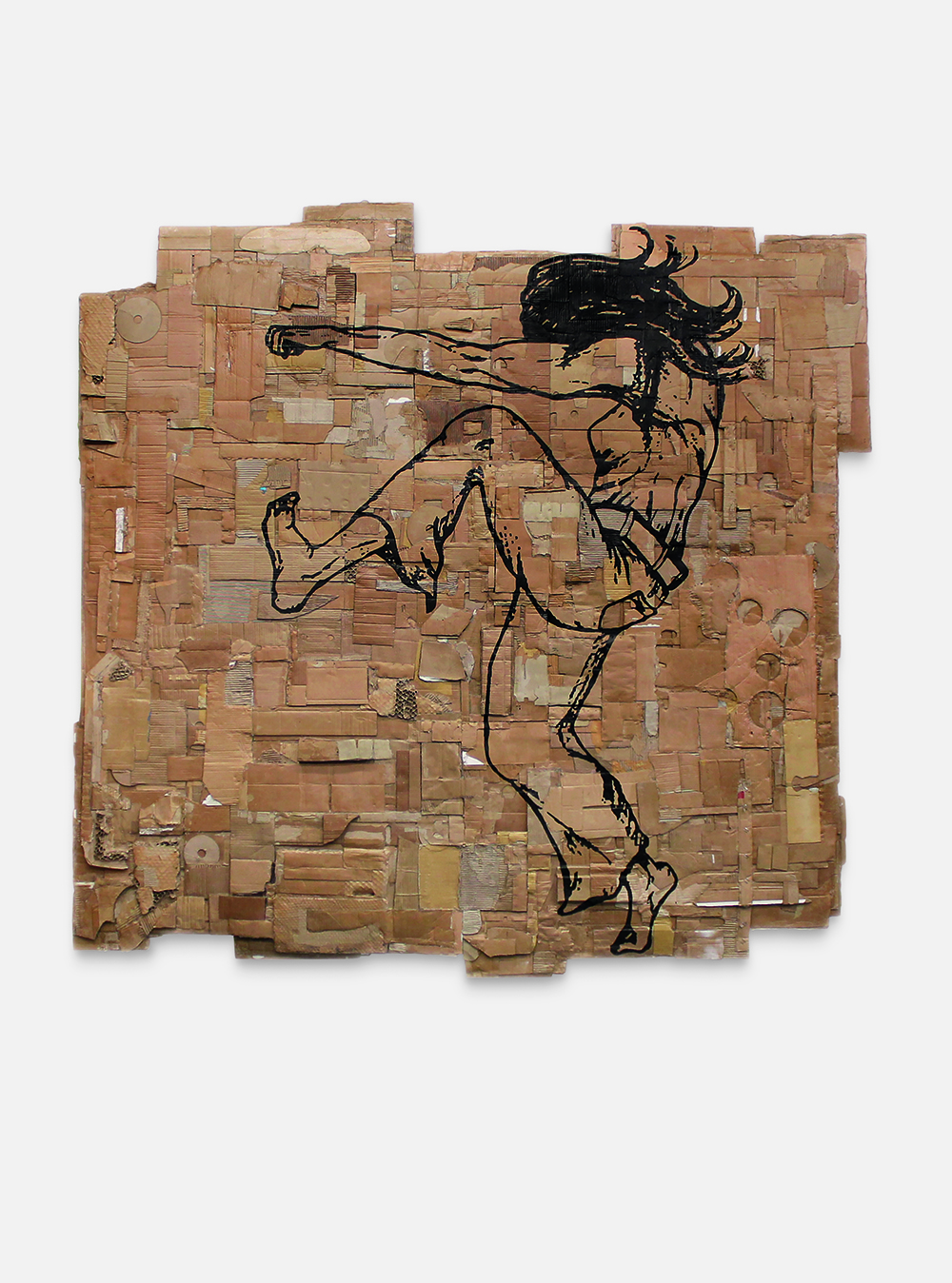 Centered in the space is the magnificent sculpture Radical Feminist Pirate Ship Tree Sitting Platform (2013), a full-scale tree sitting platform like those used by tree-sitting activists (including Bowers) fashioned as a pirate ship with feminist sails. Other works that combine art and activism include: The United States v. Tim DeChristopher (2010), a drawing and single channel video that juxtaposes climate activist Tim DeChristopher describing his acts of civil disobedience to protect 20,000 acres of land from oil prospectors with footage of Bowers in the landscape writing the lot numbers of the parcels of land on a chalkboard.

Originally installed at REDCAT, Bowers’ Nothing is Neutral and Army of Three (2005), is a book, a video and a huge grid of photocopies and decorative wrapping paper that traces the fight for women’s health rights and access to legal abortions. No Olvidado — Not Forgotten (2010) is comprised of 23 graphite drawings, each 50 x 120 inches. This monumental work honors those who have died crossing the Mexican/American border by displaying their names in ghostly white type on a darkened ground positioned behind a chain link fence topped with barbed wire. 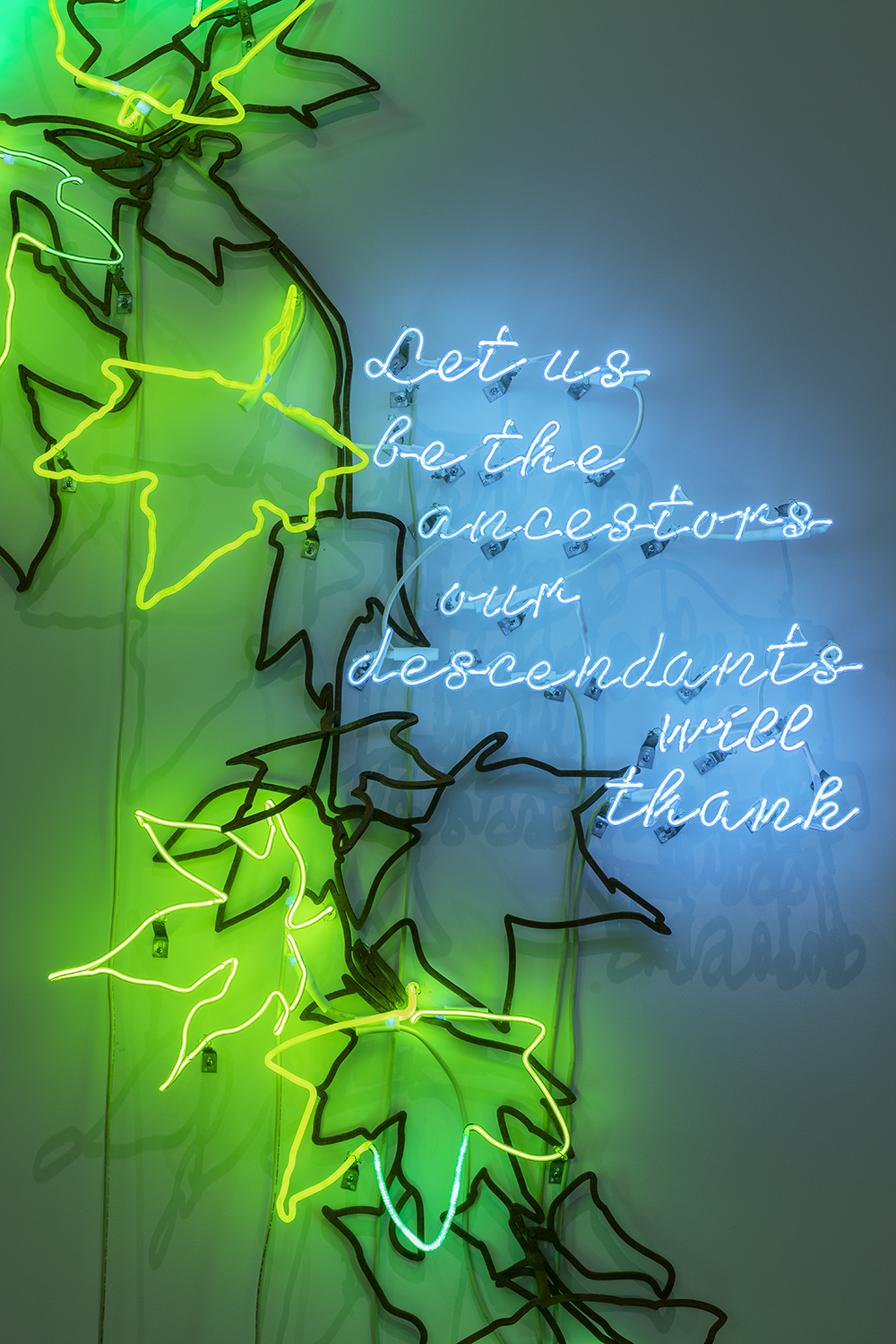 Let Us Be the Ancestors

Among Bowers’ latest works are large-scale acrylic marker drawings on collaged flattened cardboard boxes depicting feminist heroes that have been appropriated from news and historical sources. In Can You Think of Any Laws that Give Government the Power to Make Decisions About the Male Body? Quote by Kamala Harris During Brett Kavanaugh’s Confirmation Hearing in 2018, (Frontispiece by Unknown Illustrator from Les Femmes Illustres, Ou, Les Harangues Heroïques, by Madeleine de Scudéry, Published by Chez Antoine de Sommaville & Augustin Courbé, Paris, 1644) (2020), Bowers transforms the 17th Century illustration by replacing the original text with Harris’ quote and fashioning the image into a portrait of the former senator. 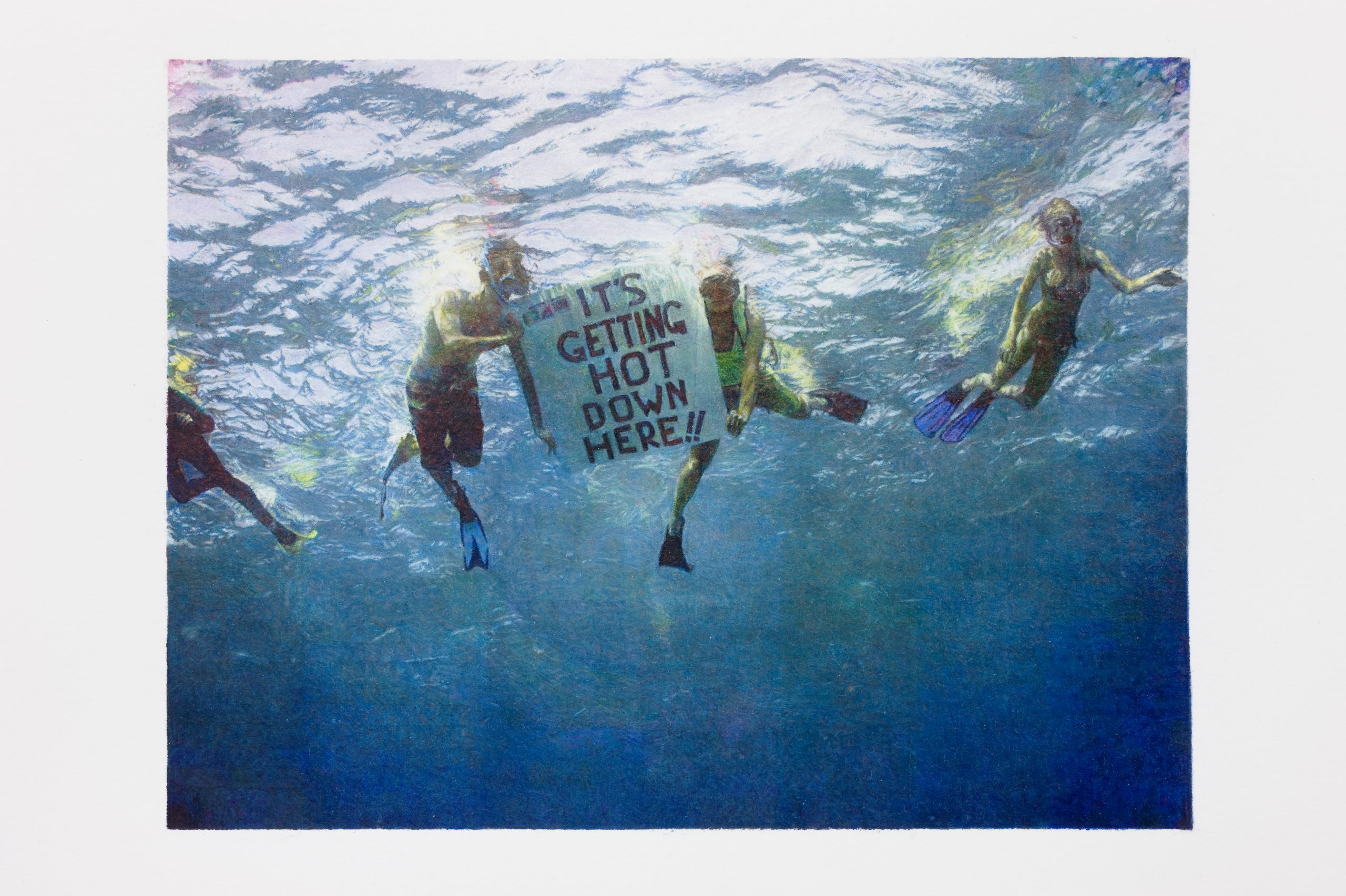 Other cardboard works include the gigantic The Triumph of Labor (2016), where Bowers adapted an 1891 illustration by British artist Walter Crane depicting ‘Triumph’ and ‘Prosperity’, as well as 19th Century laborers. Yet in Bowers’ rendition, she has added the caption “Dedicated to the wage workers of all countries,” in addition to updating many of the other texts included in Crane’s artwork. In A Menace to Liberty (2012), Bowers recreated a 1912 Mother Earth cover featuring Emma Goldman and in I Am Nature: Champion International Clearcut; West Flank of the Cabinet Mountain Wilderness (2013), she reproduces a photocopied flier of a clear-cut forest from an Eco-Defense ‘zine. 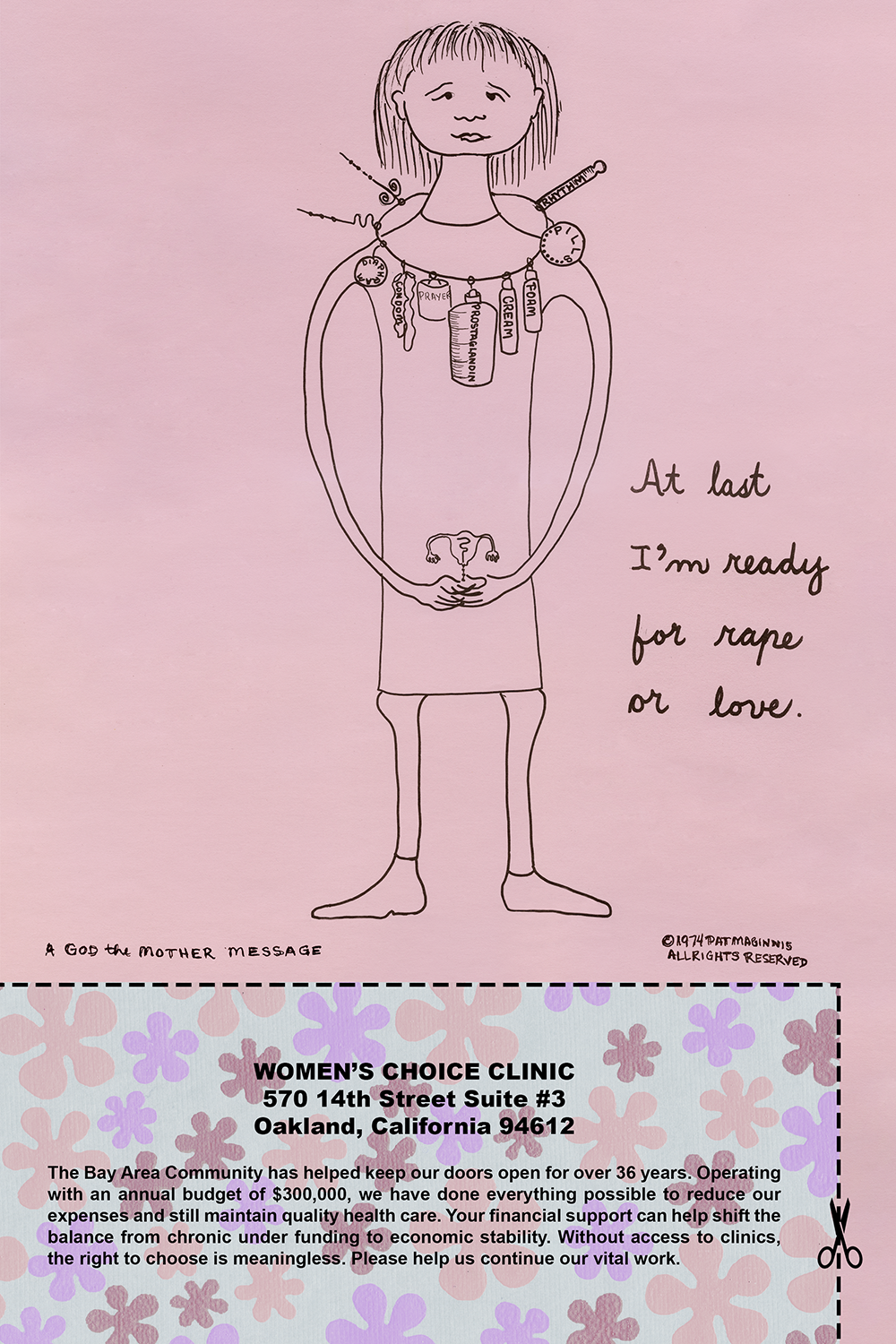 Letters to an Army of Three

Bowers’ practice is not media specific. She has created both small-scale intimate drawings and large-scale site-specific installations. Intimately involved in the issues, people and communities she works with, Bowers never comes to a topic as a voyeur. Her art and activism go hand in hand. She was even arrested during an eco-activist protest and includes a drawn replica of her mug shot in the exhibition. This image (grossly enlarged) also serves as the cover of the catalogue. Political and or protest art can be didactic and preachy. As the works in this retrospective illustrate, Bowers is that rare artist-activist who imbues her work with visual power and integrity. One is never in doubt of her talents, or her dedication and conviction.