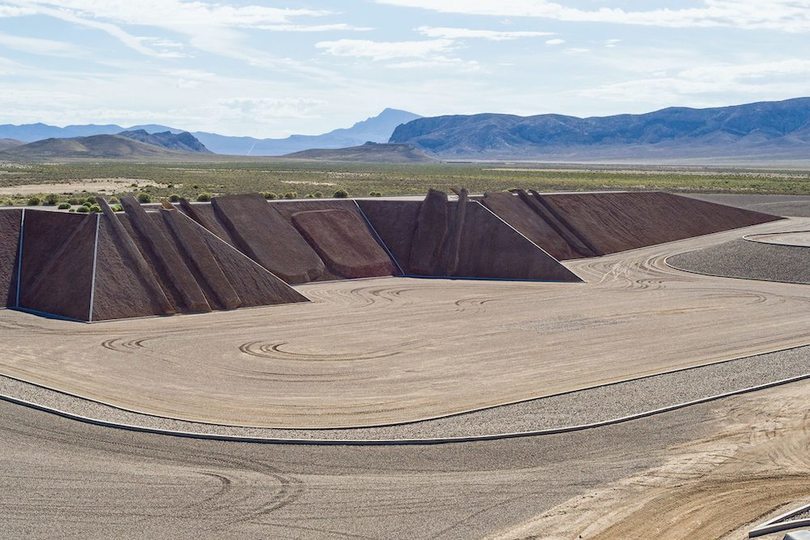 The City, a colossal sculpture by Michael Heizer on which the Land artist has labored for more than fifty years in the Nevada Desert, will welcome visitors September 2. Thought to be the world’s largest contemporary artwork, The City comprises a sprawling complex of structures and landmasses spread across a site more than a mile and a half long and a half mile wide. Its scope evoking postindustrial landscapes as well as Mesoamerican complexes, Native American burial mounds, or Egyptian ceremonial structures, the massive work is situated on the ancestral lands of the ​​Nuwu (Southern Paiute) and Newe (Western Shoshoni), roughly 160 miles north of Las Vegas, in the remote Basin and Range National Monument in central eastern Nevada.

Heizer began work on The City in 1970, spending years acquiring the parcels of land necessary to create it. Many of the materials used to make the structures composing the work were mined from the land itself. Heizer, who initially funded the work himself, encountered numerous roadblocks to the project, including the potential shrinking of the Basin and Range monuments to accommodate development. In 1998, a group of noted collectors, institutions, and dealers formed the Triple Aught Foundation, which to date has funneled nearly $30 million into the project. The foundation—whose board members include Heizer; Michael Govan, the director and CEO of the Los Angeles County Museum of Art; Glenn Lowry, director of New York’s Museum of Modern Art; collector and Glenstone cofounder Emily Wei Rales; and Gagosian senior director Kara Vander Weg—owns and manages the city, and is charged with its long-term preservation. In 2015, after a group of museum officials and the late Senator Harry Reid petitioned Congress regarding the matter, then president Barack Obama signed a proclamation protecting 740,000 acres of Nevada desert, including The City’s site, under the Antiquities Act of 1906.

“Over the years I would sometimes compare Michael Heizer’s City project to some of the most important ancient monuments and cities,” said Govan in a statement. “But now I only compare it to itself. It’s an artwork aware of our primal impulses to build and organize space, but it incorporates our modernity, our awareness of and reflection upon the subjectivity of our human experience of time and space as well as the many histories of civiliations we have built.”

The City will be open in 2022 from September 2 through November 1. Admission is free, with public accessibility limited during the first year of the work’s being open to the public. Advance registration is mandatory and is available on a first come, first served basis by emailing the Triple Aught Foundation.