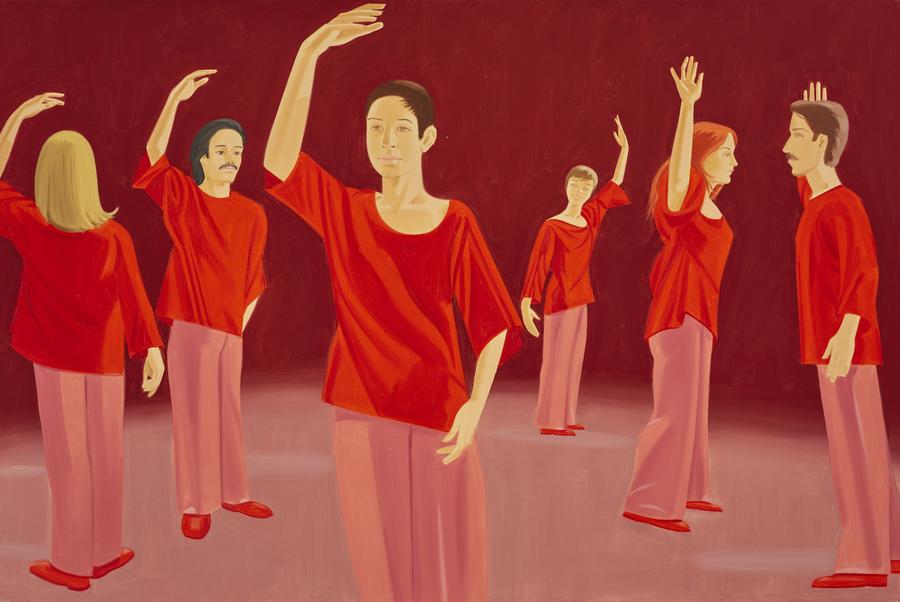 Alex Katz: Theater and Dance is the first comprehensive museum exhibition of artist Alex Katz’s highly collaborative and playful work with choreographers, dancers, and members of avant-garde theater ensembles. The exhibition will be on view at the Colby Museum through February 19, 2023.

Organized with the guidance of Katz and his studio, and in collaboration with consulting curator Robert Storr, Alex Katz: Theater and Dance offers an unparalleled opportunity to experience Katz’s designs and artistic process. The exhibition also demonstrates how painting and design for the stage have intertwined in Katz’s work.

It was Katz’s abiding interest in dance and experimental theater that led to his work in set and costume design. As he found his artistic footing, Katz gained entrée into the circle of painters, poets, critics, dancers, and musicians loosely identified as the New York School. In 1959, he began his decades-long collaboration with dancer and choreographer Paul Taylor, devising his breakthrough “cutouts,” two-dimensional sculptures that informed his vision for the stage.

In Katz’s words: “the experience [of collaborating with Paul Taylor] expanded the idea of what I could do. You’re not just a painter, you’re a person who has an idea about the art. Once you get that through your head, you have an expanded way of dealing even with your painting.”

Katz and Taylor ultimately partnered on 16 productions, an enduring creative relationship that yielded some of the most significant post-modern dance of the 20th century and led the artist to collaborations with other companies including Yoshiko Chuma, Laura Dean, William Dunas, and Parsons Dance.

Throughout his many theater and dance collaborations, Katz has challenged the conventional while bringing his recognizable style to performance. Alex Katz: Theater and Dance brings together never before exhibited sketches from the artist’s collection and major sets and paintings related to various productions, as well as rare archival materials from Paul Taylor Dance Company. Together, these will show Katz introducing tenets of postwar painting into dance and theater aesthetics, foregrounding the deep inspiration he has drawn from a prolonged study of performance.

The Colby Museum is a leading institutional steward of Katz’s artistic legacy. In 1992, the artist donated more than 400 of his works to the museum, and in 1996, the Paul J. Schupf Wing for the Works of Alex Katz opened, making the Colby Museum one of the few in the United States with a wing devoted solely to the work of a single living artist. The museum’s collection now includes more than 900 works by Katz, as well as a trove of archival material related to the Katz Collection, available for use by students and researchers.

In recent decades, Katz has expanded his support of other visual artists through the Alex Katz Foundation, which has donated nearly five hundred outstanding artworks to the Colby College Museum of Art. As a companion to Alex Katz: Theater and Dance, the museum will present All in One: Selections from the Alex Katz Foundation Collection, opening September 20 on the lower level of the Jetté Galleries. The exhibition will explore the idea of visual polyphony through artworks that create unexpected unities and harmonies; use materials to invite multisensory, bodily experiences; and explore dance and choreography by putting patterns of movement into action.

Katz is also the subject of Alex Katz: Gathering, a major career retrospective which opens at the Solomon R. Guggenheim Museum on October 21, and the Colby Museum’s Katz Collection will be amply represented in this historic exhibition.