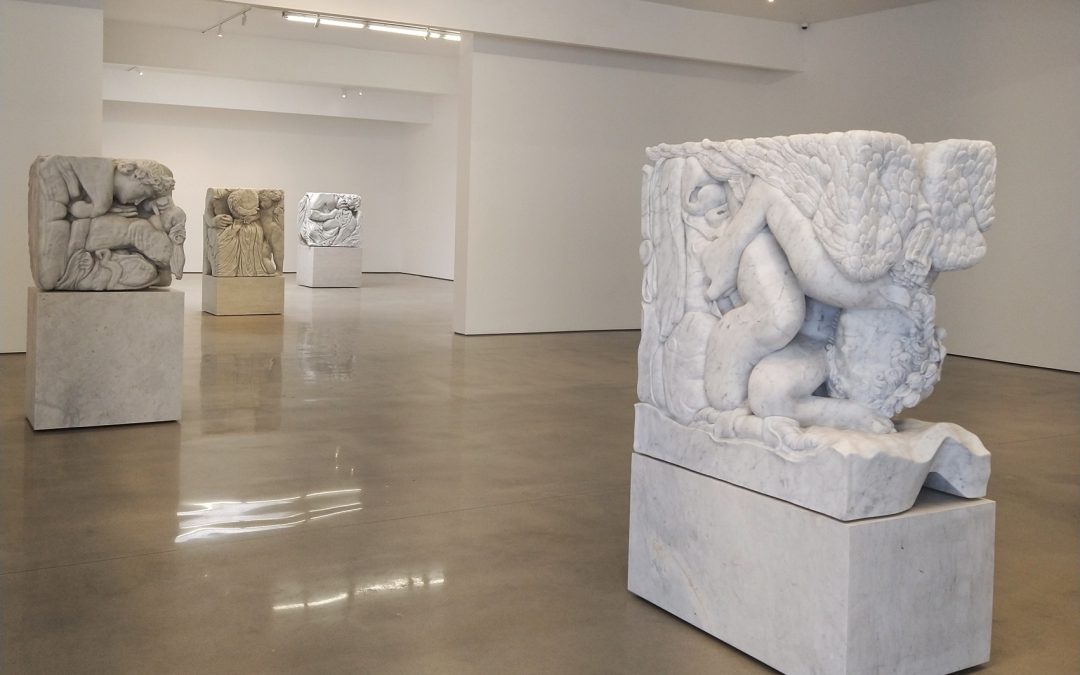 Imagine the grandiloquent marble statues of classical Greek and Roman tradition, to have graced shrines and temples for eons. Now imagine those same sculptures pummeled and compressed into cube shaped masses, with the subject’s lineaments squished into less than flattering positions. This is what awaits us at The Hole in Los Angeles, in Adam Parker Smith’s monumental Crush exhibit.

Although consisting of only six pedestaled sculptures made of white marble Carrara (all created in 2022), the perceptual sum of the show proves to be much larger than its parts, with each piece crafted from brazen proportions. Smith has been studying classical and medieval sculpture for some time now, having previously explored alternative ways of spinning notorious, antiquated works into contemporary renditions. 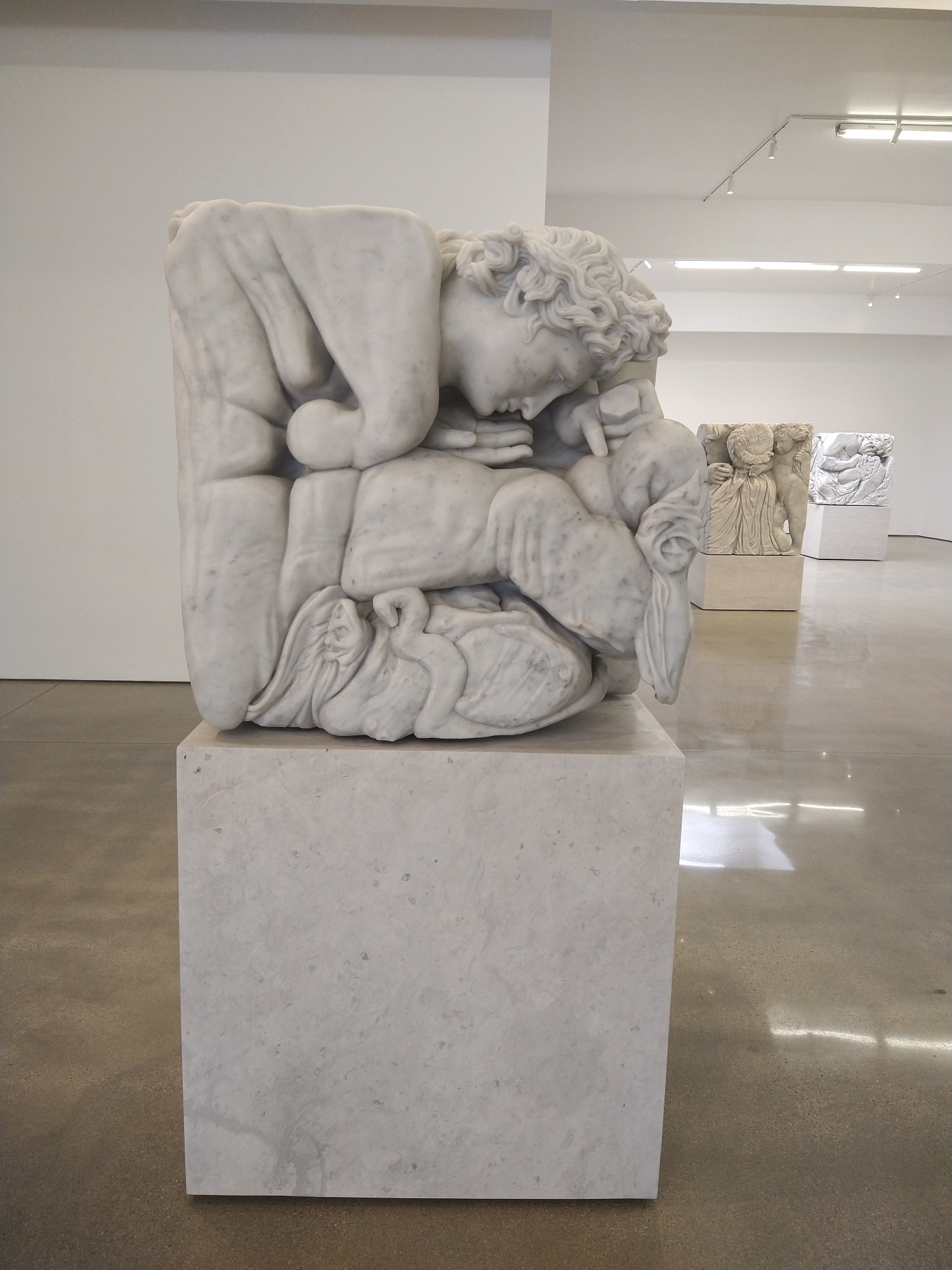 With this new series, there is a particular sense of irony involved, considering that such sculptures have been stripped of the very things they have traditionally served to represent: greatness, idolatry, heroism. Arms that would normally be gallantly outstretched towards the heavens are, instead, awkwardly tucked beneath humbled faces.

Cupid Triumphant displays the victorious Roman god of love impossibly folded like the contents of an overstuffed suitcase. His ornately chiseled wings, which would normally be a lush, fluttering expanse, enclose Cupid’s body into a rigid and angular arrangement. Despite this disposition, his upside-down face still bears a pleasant smile, and in his right hand, a bent arrow futilely awaits a prospective target. 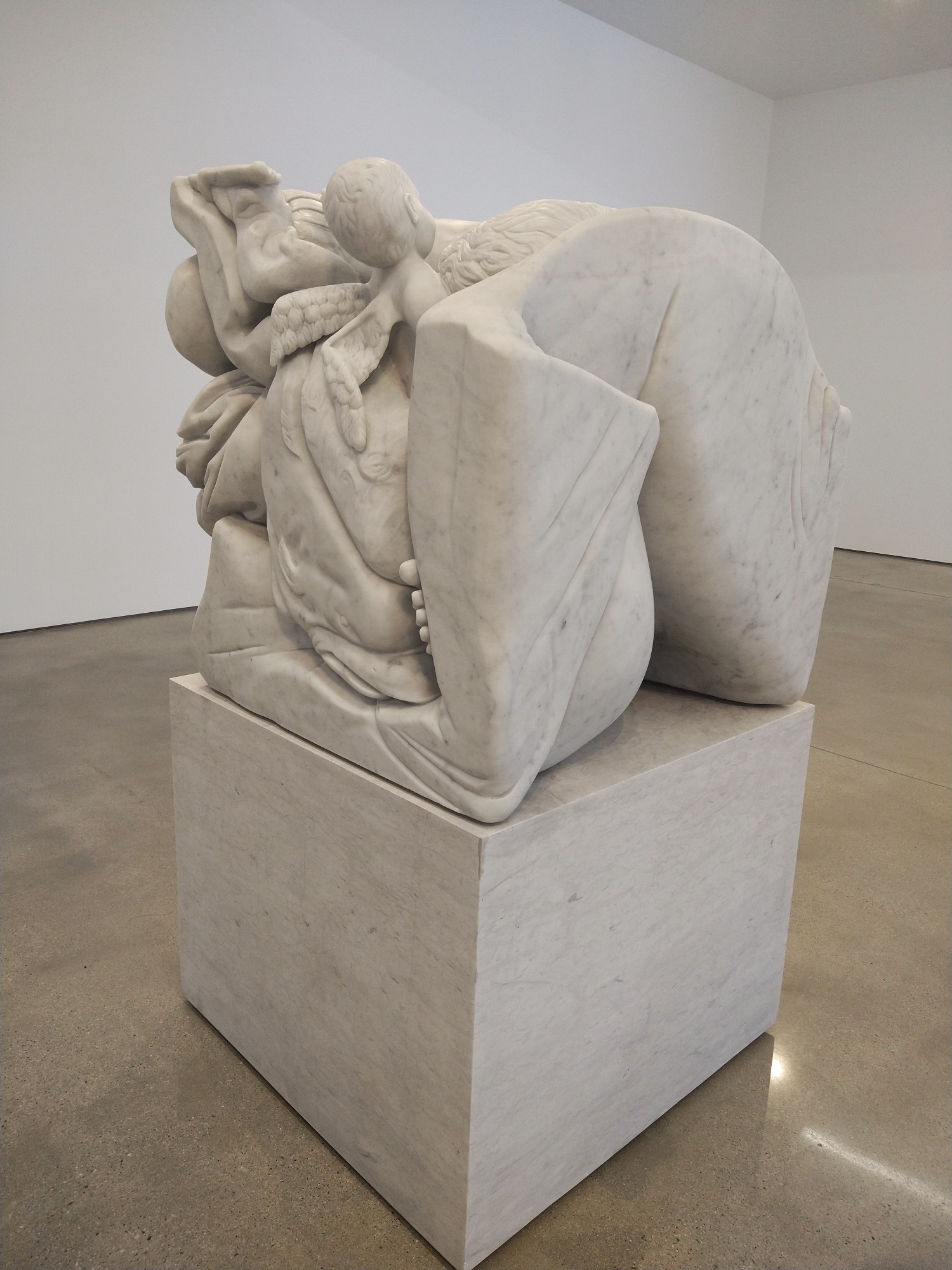 In Apollo of Belvedere, previous versions would exalt the robust, upright body of Apollo standing beside a python-entwined stump, but here, he is once again reduced to a block of intricate furrows and creases, with head pressed against knee (or thigh, or…?) Glimpses of detail work such as curls, fingers, facial features, and fabric reveal Smith’s painstaking attention to precision. 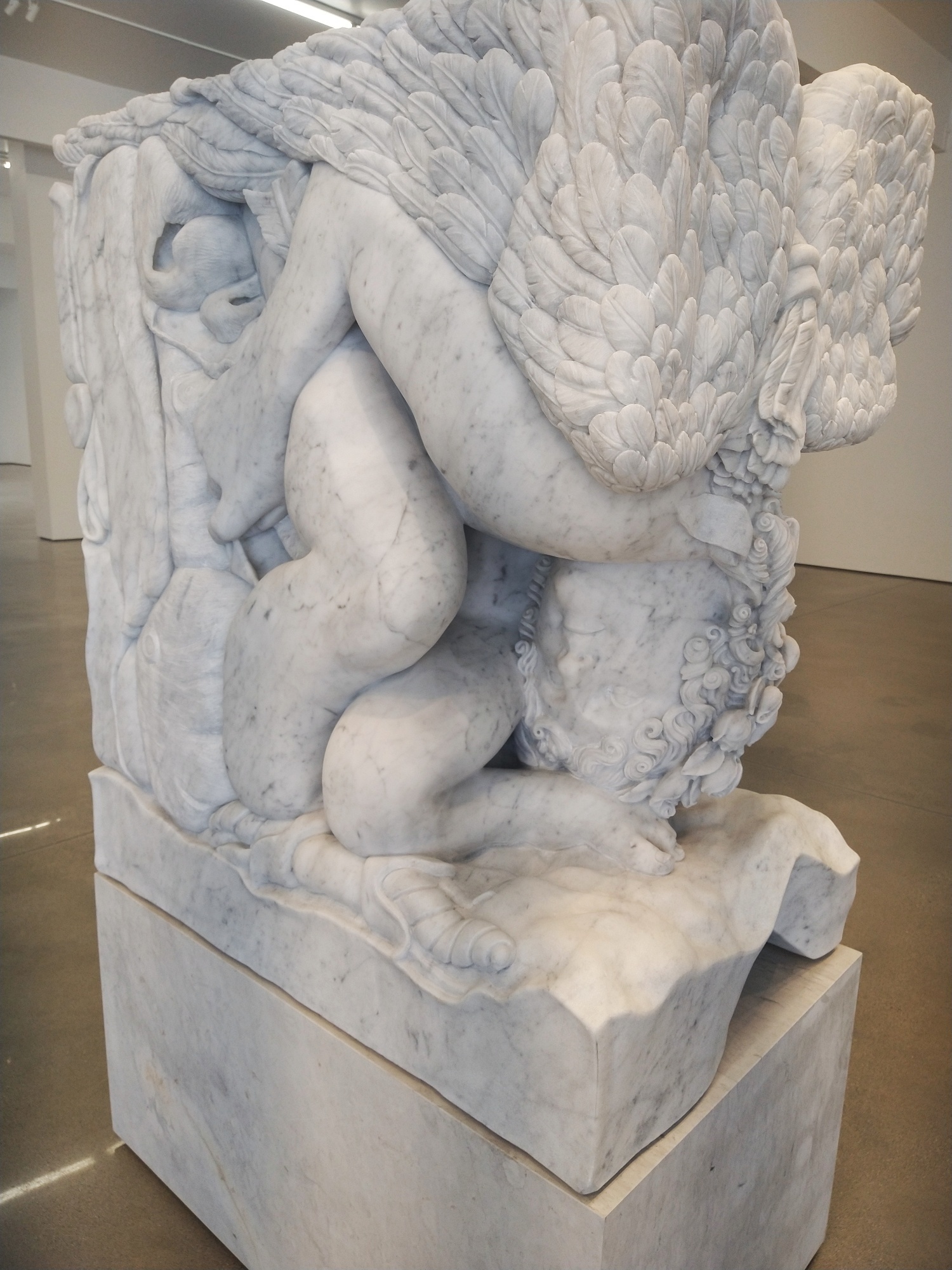 In order to perfect the outcome of these marvelous, marbled creations, Smith utilized cutting- edge technology and the aid of a team of skilled carvers. With extensive research and the use of 3-D modeling programs, the artist first digitally simulated the previous sculptures in their authentic Hellenic design, before tangibly recreating them as the disfigured forms we see before us. To further exemplify the massive amount of labor entailing these works, a side room of the gallery offers a photo installation documenting the technical and physical process, as well as intimate pictures of the artist’s time spent in Rome. 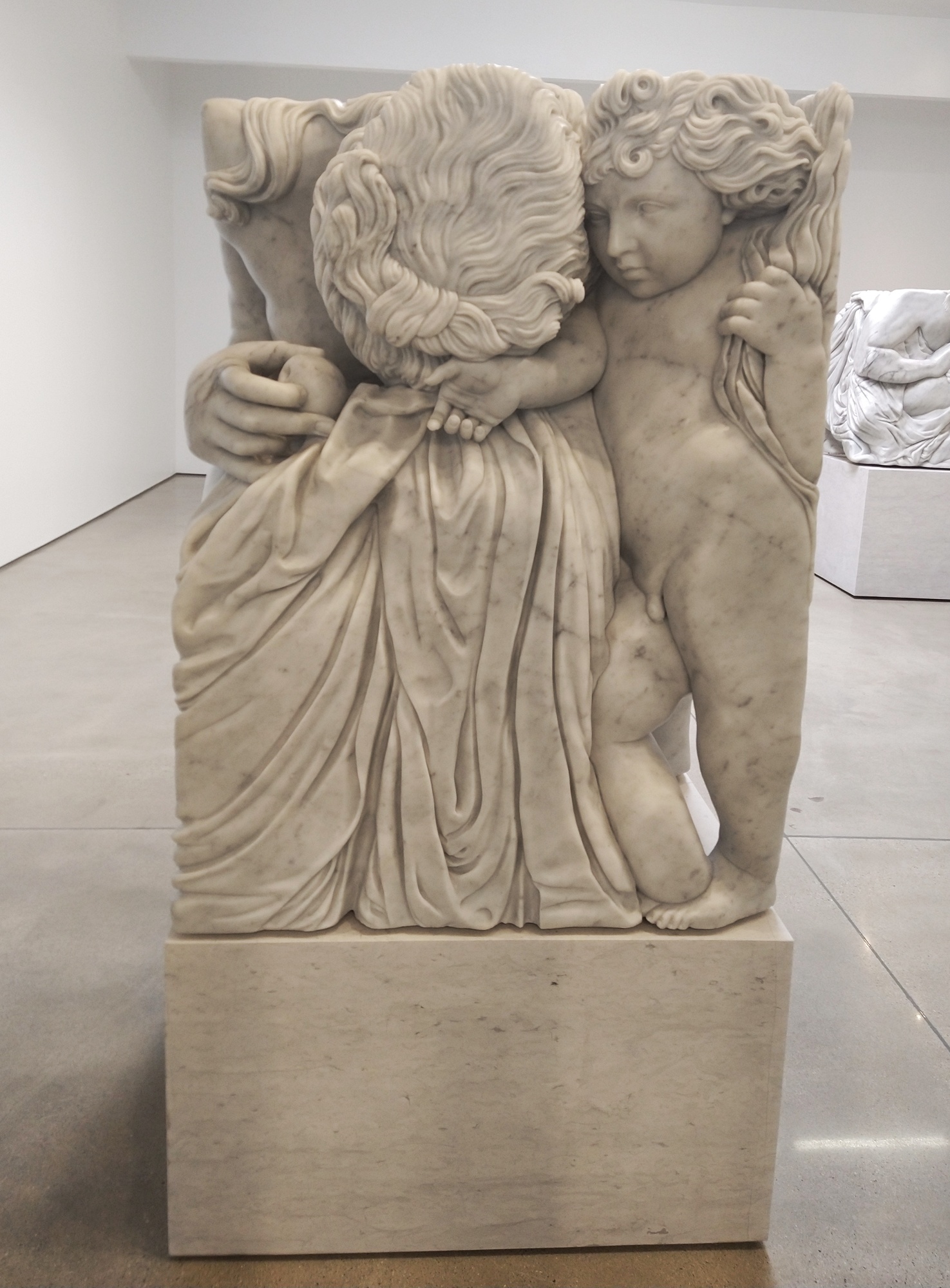 Ultimately, it seems Smith’s focus is to make us question the veneration of the human form, a long-standing predilection of ours, as demonstrated through ancient sculpture. As this series literally and effectively points out, our narcissistic inclination need, on occasion, be turned on its head, perhaps as a reminder of our imminent evanescence.

Cover image: installation view, Crush; all images courtesy of The Hole, photographed by the author.