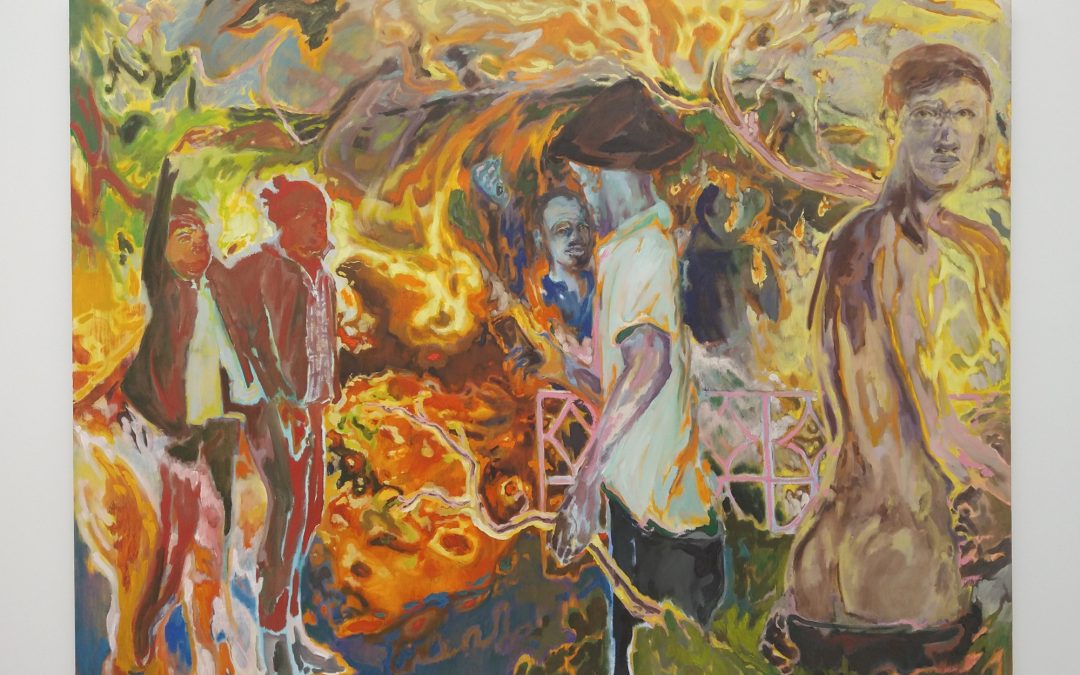 Triumph of the Southern Suburbs

In their inaugural solo exhibition in Los Angeles, artist Blake Daniels invites us into a sultry realm that bridges the real and unreal, bliss and anguish, utopia and the netherworld: A place where Dionysus would most likely feel right at home. Daniels lives and works between South Africa and the United States: While much of their subject matter references the Johannesburg landscape, it also seems to stem from an emotional environment percolated from the depths of their own psyche. Case in point: Triumph of the Southern Suburbs, a considerable collection of works created between 2021-2022 that is currently on view at Mathew Brown Gallery.

These colorful, expressionistic paintings ooze elusive, figurative narratives encased within fever-induced dreamscapes. They are seeping with sexual, sociological, political, and religious overtones. Through what appears to be a blending of layers altogether experiential, referential, and merely imagined, these works lithely yet effectively convey the themes of queerness, identity, relationships, and community. 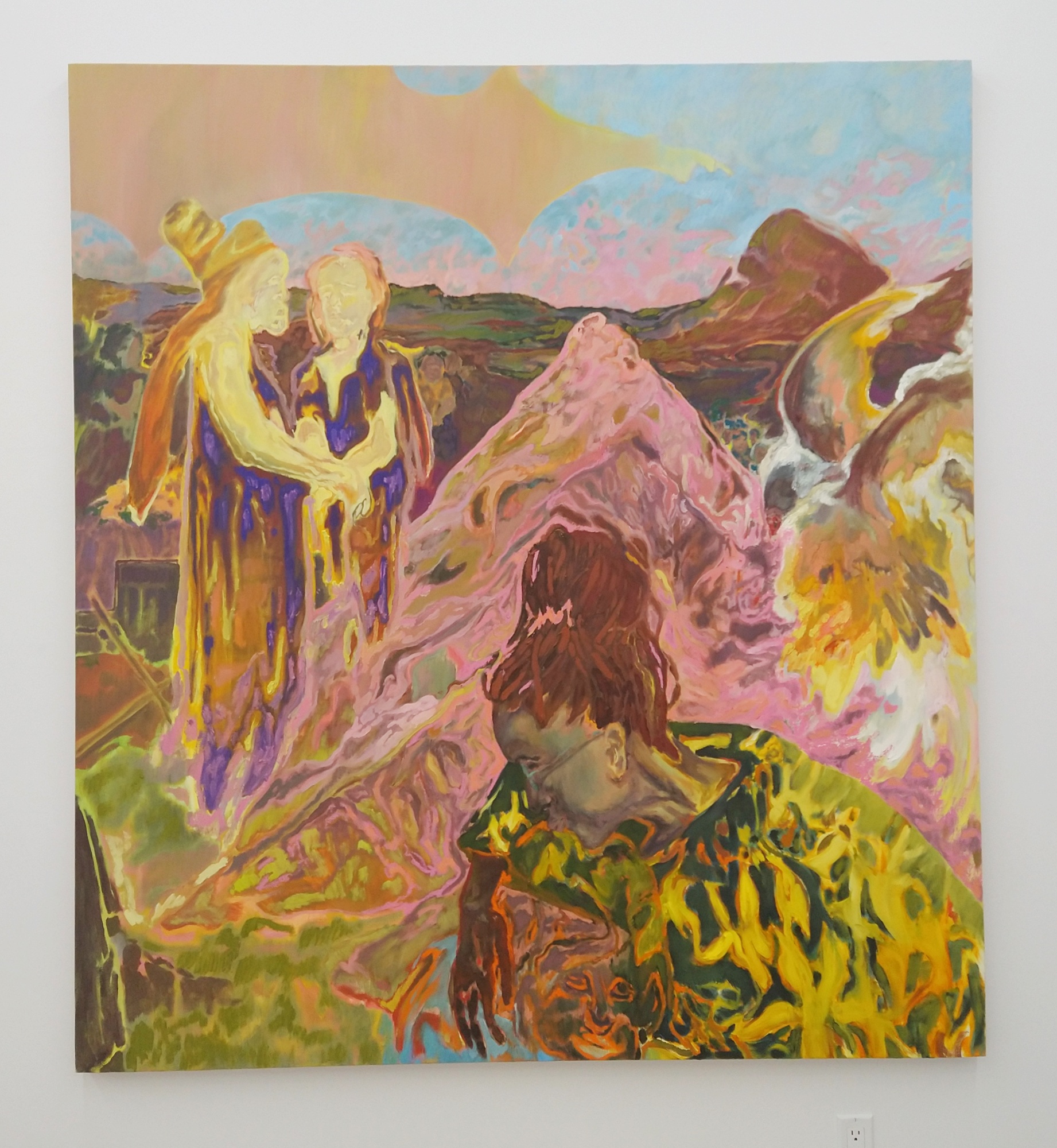 Inanity of the Martyr shows a scene of flowing, swamp-like vegetation, punctuated by a diagonal tree bowing with the weight of a pearly-white torso. The dramatic, suspended fruit happens to be a satyr that has evidently hung itself by its hooves and drowned. The creature’s head is shown submerged beneath the river below, with an eerie, lifeless gaze and red hair wavering amid murky reflections. As the title suggests, this pan-like being may have terminated itself in what was perhaps a fit of shortsightedness. Dismal outcome aside, the overall atmosphere somehow still renders itself as tranquil afternoon, with accents of succulent orange flowers and curlew perched nearby. 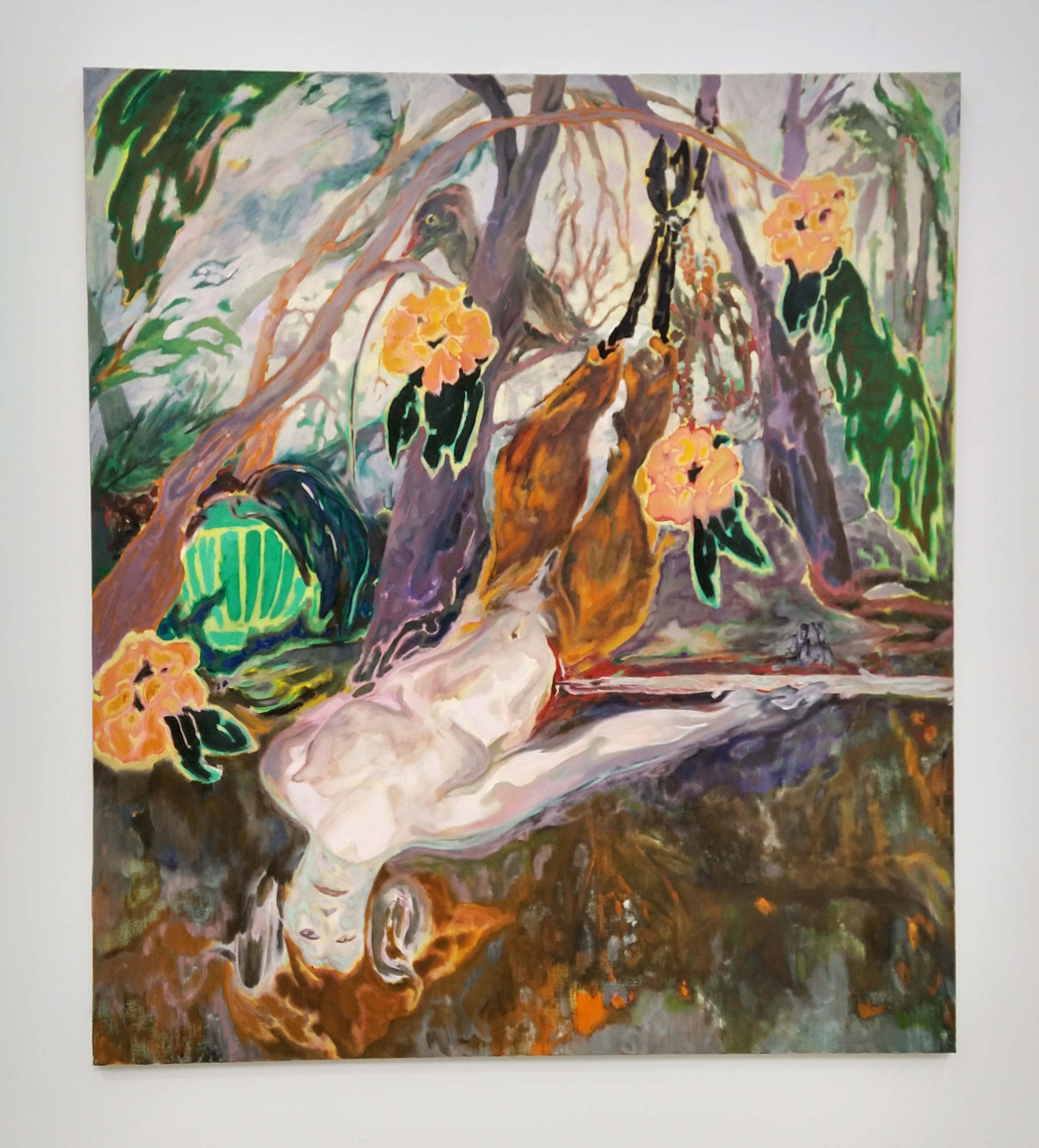 Inanity of the Martyr

Although highly deconstructed, Johannesburg Street Dogs or The Assumption of Lerato is a direct nod to the Christ figure represented in El Greco’s The Trinity. Here, the sensuously posed body (depicted as Black instead of Middle Eastern) is embraced by a trio of demonic looking dogs (instead of angels), and the legs are wound with a shroud of flamboyant purple (in lieu of classic white). There remains a gash in the figure’s side, yet they boast an expression of amusement rather than demise. Again, as the title suggests, there is a blurring of references that are the overall local, personal, and mythical influences of the artist themself. 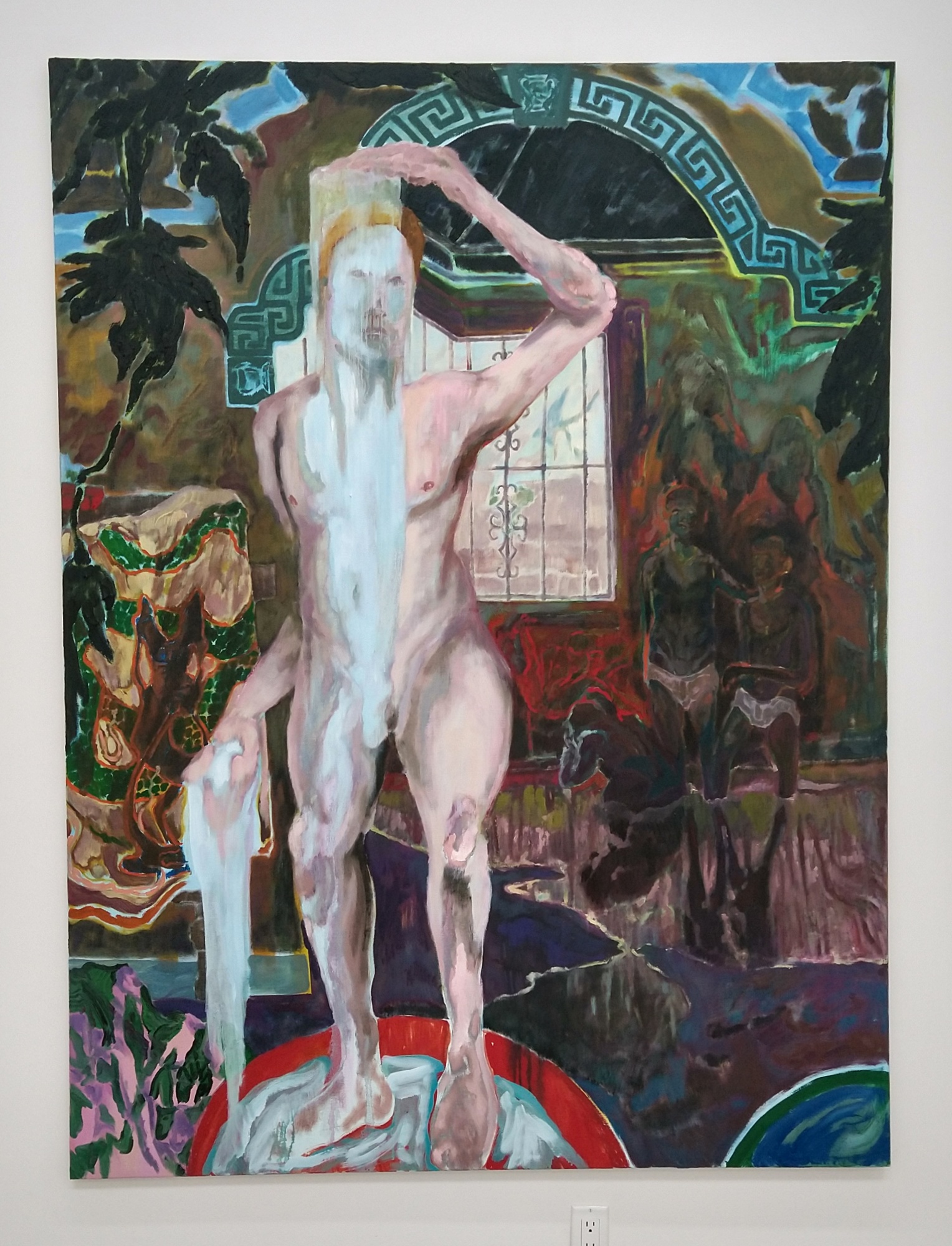 The Land of The People Once Living shows a vibrant beach scene, animated with feral palm trees and a whimsical, pastel pink sunset. In the distance, figures appear to be casually collecting driftwood for a bonfire, while in the foreground, hallucinatory beings are fused with the contours of the environment. Perhaps, in this place, both the living and the souls of previous generations coexist, or maybe they are all just phantoms echoing their truths over the land. 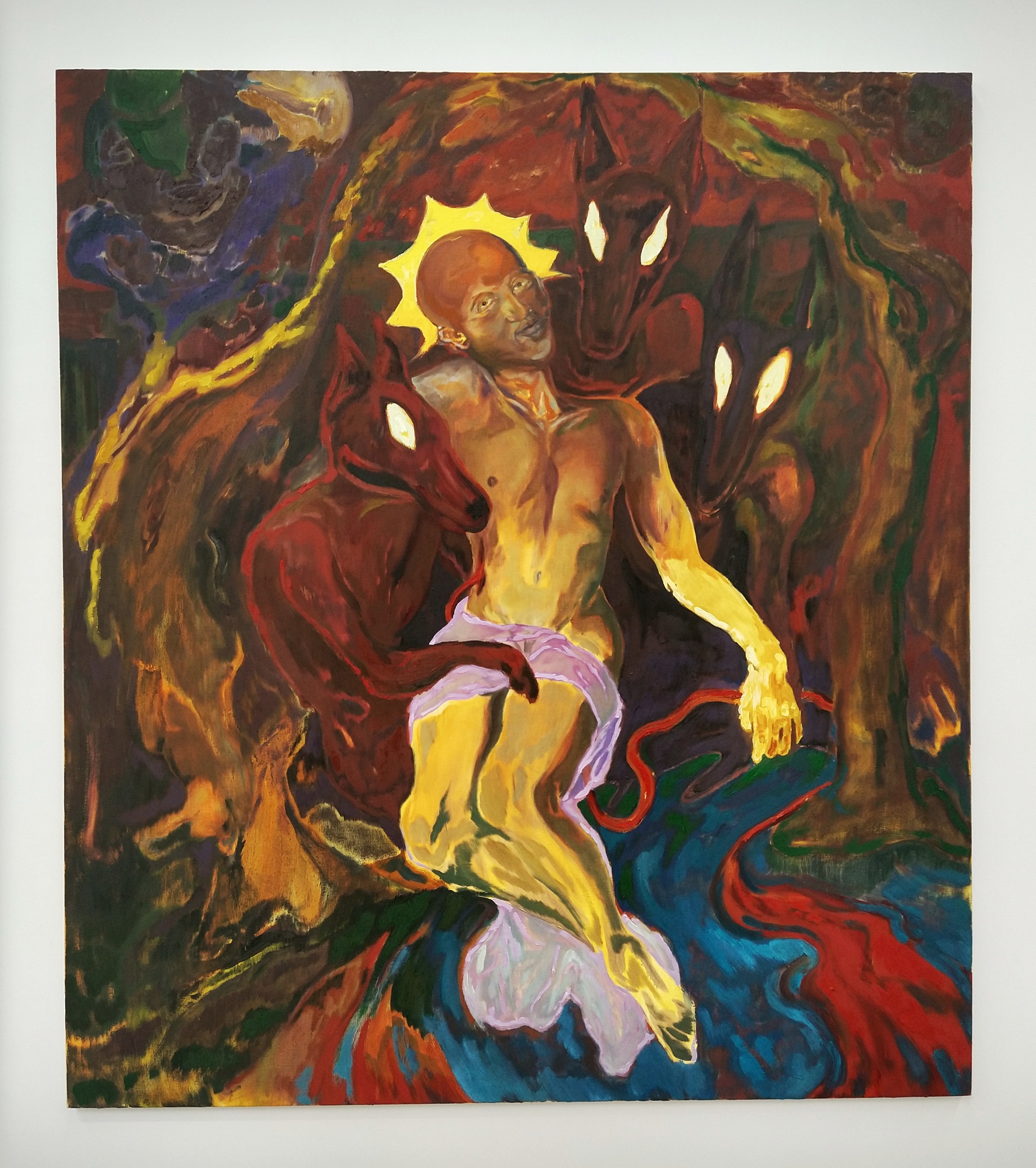 Johannesburg Street Dogs or The Assumption of Lerato

Pervasive throughout this series is the sense that there is some moment of reckoning – either internally or externally – that’s been had or is about to happen. Regardless, it’s an immensely rich expression of the tribulations of the human spirit, and how we might persevere through it all.

Cover image: The Eruption of Constitution Hill; all images courtesy of Matthew Brown, photographed by the author.