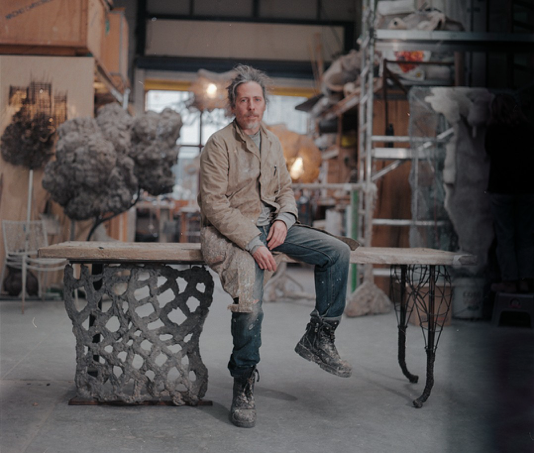 The permanent gallery space will open June 25, 2022 at 7070 Santa Monica Boulevard, West Hollywood and will be led by newly appointed Director Louise Torron.

Spanish artist Nacho Carbonell has been selected to inaugurate the new gallery, which simultaneously serves as his debut solo exhibition in the United States. Carbonell, who many will know from his prominent participation in DYSFUNCTIONAL, presented alongside the 2019 Venice Biennale, will unveil more than a dozen new, unique works, each sculpted by hand and inspired by nature. A true evolution from Carbonell’s earlier Cocoon works, these new sculptures recall the sun-baked earth of Valencia in his native Spain. This series draws from memory, traveling home in his mind during isolation, and includes the artist’s first fountain, incorporating the physical element of water as part of his work, which also resonates with the landscape and context of the California region.

At the same time, Carbonell’s practice is deeply influenced by art history, with references to figures such as the 15th-Century Dutch painter Hieronymus Bosch and Post-Impressionist icon, Vincent van Gogh. Carbonell’s work also takes clear cues from 20th Century art- ist Antonio Tàpies and late Austrian sculptor Franz West, two revered artists whose unconventional approaches to art making have had a lasting impact on Carbonell’s tactile and experimental studio practice. As if carved from nature itself, Carbonell’s signature style has become recognizable worldwide for his ethereal dreamscapes that seeming- ly each have a story to tell about the world we inhabit and our place within it.

“These sculptures mark a real departure from Nacho’s earlier work. His magic lies in his ability to transform organic materials and debris into extraordinary sculptures. I see in him a beautiful mix between Franz West, Alberto Burri and Antonio Tapies.” says Loïc Le Gaillard, Co- Founder of Carpenters Workshop Gallery.

“Nacho is perfect for LA and the wild, wild west – strong, rogue and beautiful at the same time, it’s art from the gut. Each unique work is a portrait of his brain.” Julien Lombrail, Co-Founder of Carpenters Workshop Gallery, adds.