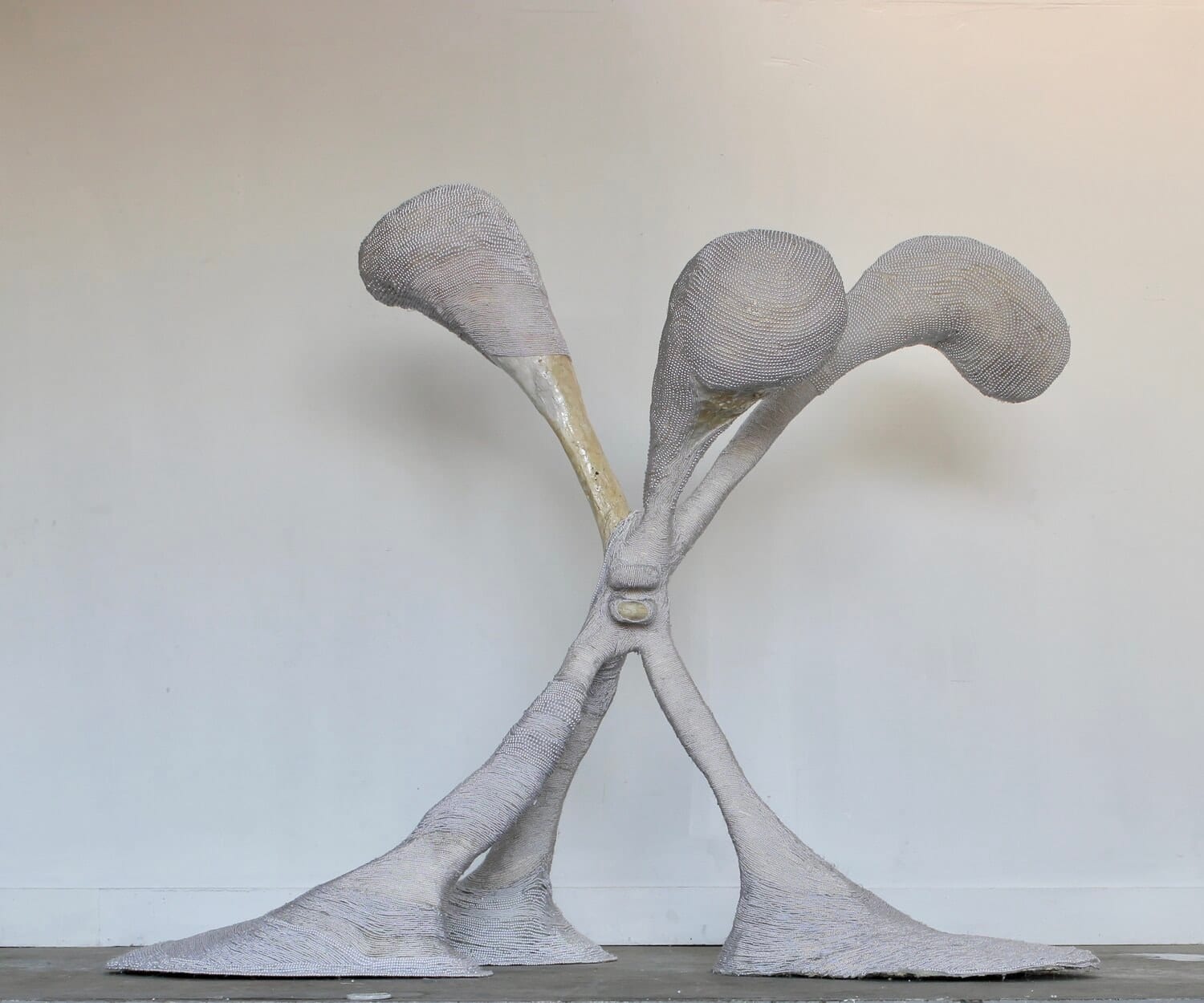 The title of this exhibition takes inspiration from the theory of Deixis am Phantasma, which translates “to point at an empty space (or to the ghost).” Through a spectrum of idioms and lexicons, from folkloric mysticism and religious symbology to the metamorphosis and organization of natural and architectural forms, the artists in Dreams in Deixis re-examine the interpretations of femininity, identity, and the human experience.

The sculptural objects of Claire Chambless are architecturally reimagined to create escape routes, preventing both containment or access for the physical body and psychic self.

Chambless’ cultural symbols function as signs of physical/ideological containment, enclosure, or apparatuses of support for the physical body/psychic self. Rosemary Holliday Hall’s Enclyclia imagosis embraces the physical process of metamorphosis as a means of investigation in which we make sense of the world and relate to ourselves and others through imagination, metaphor, and material. Similarly, Isabella Kressin is interested in the process of metamorphosis and how it relates to the body and its immaterial forms. Her photographic and sculptural works are intimate, and draw on themes found in mythology, as well as memories of her adolescence with an emphasis on the female body, portraying it in various states of nudity, relief, ecstasy, and joy.

In addition to employing a broad range of material and conceptual approaches to their practice as a means of addressing socio-cultural ideals, expectations, constructs, and perceptions, the artists materialize their fears and desires by bridging the tangible world of reality with fantasy. The mud spires of Lara Joy Evans evoke termite mounds or stalagmites and delve into notions of techno-primitivism, religious symbology in nature, the digital dark age, and its implications on the collective conscious. Kira Scerbin’s humanoids are meditations on having a body and existing in a physical world that is built upon perverse and primal urges. These creatures, with their disquieting glares and unearthly presence, relate her interest in the perspicacity of strangeness. Enlisting inanimate objects as stand-inanimate objects as stand-ins for implied bodies, Sessa Englund’s work emphasizes the exchange between aggression and vulnerability; otherness and familiarity; expectations and failure. Her work blends a variety of references — from Northern European folklore to piercings and troll dolls — grounded in cultural semiotics: an exploration of the meanings we assign to materials and processes.

Amelia Lockwood’s artworks trace connections from geological formations, esoteric map systems, and the constructs of modern-day board games. The overlapping aesthetics of both create structures in which the mind and body are aligned towards achieving a resolution through navigational strategies. Lockwood’s practice aims to highlight both the utilitarian nature of ceramics and the cultivation of the human spirit. Carlotta Lücke’s practice centers on the illusion of authenticity and the representation of collected personal and shared experiences. Lücke’s silicon composites cull together cultural references, collective stories, and shared experiences that appear spontaneous and arbitrary, but are highly composed compositions where everyday tropes are collected, sampled, and reworked over time.

Employing a broad array of styles and iconography, the artists in Dreams in Deixis use a variety of abstract vernaculars to meditate on the aesthetics of femininity, fantasy, and mythology. The images, objects, and forms brought together in this exhibition challenge our fabrications of identity and explore tensions between the intelligible and fantastical, raw and refined, primitive and contemporary.