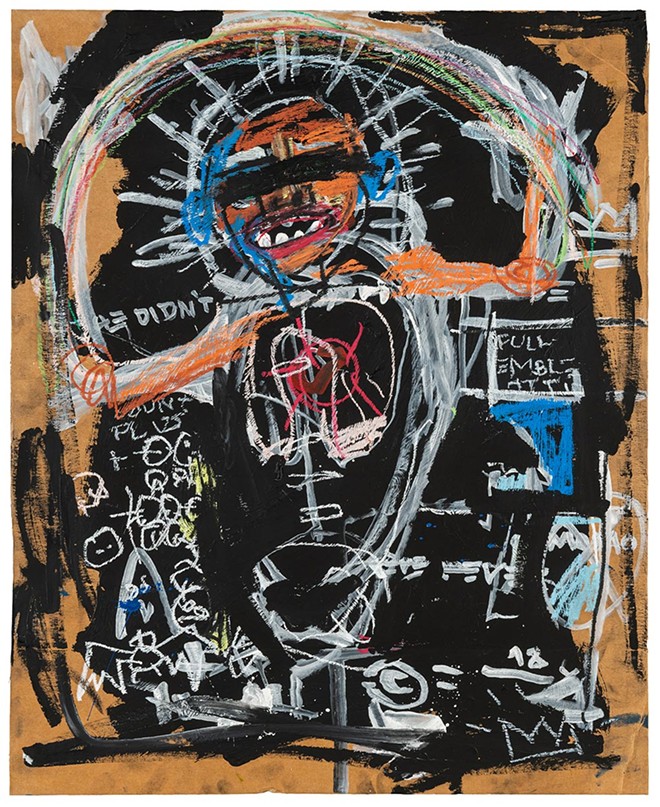 Orlando Museum of art credits image as: Jean-Michel Basquiat, "Untitled (Boxer)," (1982). Matte acrylic, wax crayon and paint stick on corrugated cardboard, 25 3⁄4 x 20 3⁄4 inches. Basquiat Venice Collection Group One of the works painted on cardboard shows a message on the back: “Align top of FedEx Shipping Label here.” But the font and ink color were not used by FedEx until after the artist’s death.

Jordana Moore Saggese, an associate art history professor at the University of Maryland who was hired to write a report on a group of paintings said to be by Jean-Michel Basquiat and comprising an exhibition of the late, revered artist’s work at the Orlando Museum of Art, has asserted that she never authenticated any of the works in question. The twenty-five paintings, which made up the museum’s show “Heroes & Monsters: Jean-Michel Basquiat,” were seized by the FBI’s Art Crime Team on June 24 over concerns that they were forged. All made on reclaimed cardboard, the works were said by their owners and by former Orlando Musuem of Art director Aaron de Groft to have been made around 1982, purchased by a now-deceased Hollywood television writer for a nominal fee, and “rediscovered” in 2012 after languishing in storage for decades.

Saggese was hired in 2017 by the works’ owners—represented by trial lawyer Pierce O’Donnell, who had purchased an interest in six of the twenty-five works from art and antiquities dealer William Force and his financier, Lee Mangin—to offer her opinion in regard to their authenticity. She provided the Baltimore Sun with a statement (available in full at Artnews) in which she revealed that she reviewed only photographs of a number of the paintings. “Based solely” on the photos, she wrote, “I rejected nine works outright. I concluded that 11 works ‘could be’ Basquiat’s, based solely on a review of photographs while reserving the right to amend my opinion upon an in-person inspection, which was never provided.” Saggese was able to review seven works in person. She determined, based in part on evidence provided by handwriting experts and on proof of provenance provided by O’Donnell, that these “may be” by Basquiat. The forty-one-page search warrant wielded by the FBI repeated this language, noting that Saggese wrote that it was her “professional opinion that this work is consistent with the hand of Jean-Michel Basquiat and may be attributed to him.”

Saggese noted that she was not asked to uncover the works provenance or to appraise their worth; additionally, she “provided two confidential and tentative reports for the collectors, which were expressly not to be used or relied upon by third parties.” When she contacted O’Donnell and De Groft to “ensure that they were not sharing the reports or misrepresenting [her] opinions,” De Groft threatened to reveal to her university employer that she had received $60,000 to write the reports. “You want us to put out there you got $60 grand to write this?” he wrote in an email. “Ok then. Shut up. You took the money. Stop being holier than thou.” De Groft was fired by the Orlando Musuem of Art’s board of directors on June 28.