Saj Issa: ‘I Was Out Partying While You Were Home Making Prayers’
Mining Her Life and Memories 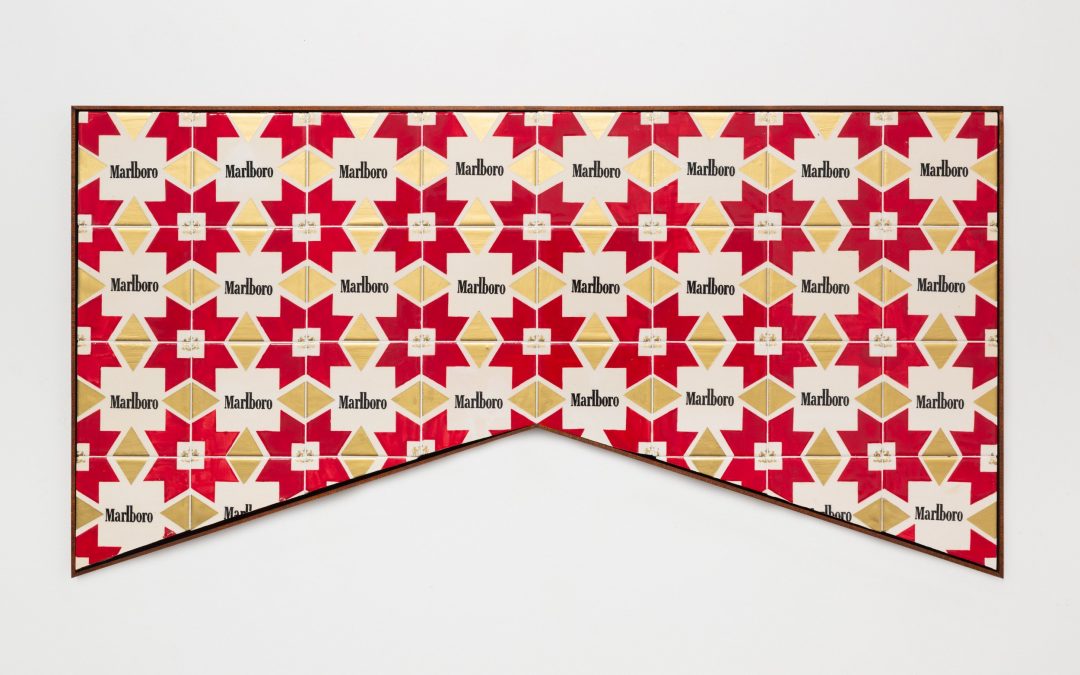 I Was Out Partying While You Were Home Making Prayers

In her impressive solo debut, Saj Issa presents a body of work that builds on her experiences growing up between Palestine and St. Louis as a point of departure. Issa challenges and provokes her viewers through the juxtaposition of ordinary objects and locations with cultural and social stereotypes of Arabs infused with a feminist twist. The five mixed media works and one sculpture on view at Le Maximum in I Was Out Partying While You Were Home Making Prayers bring to light Issa’s mastery of craft and attention to detail, as well as the schisms between her two cultures. 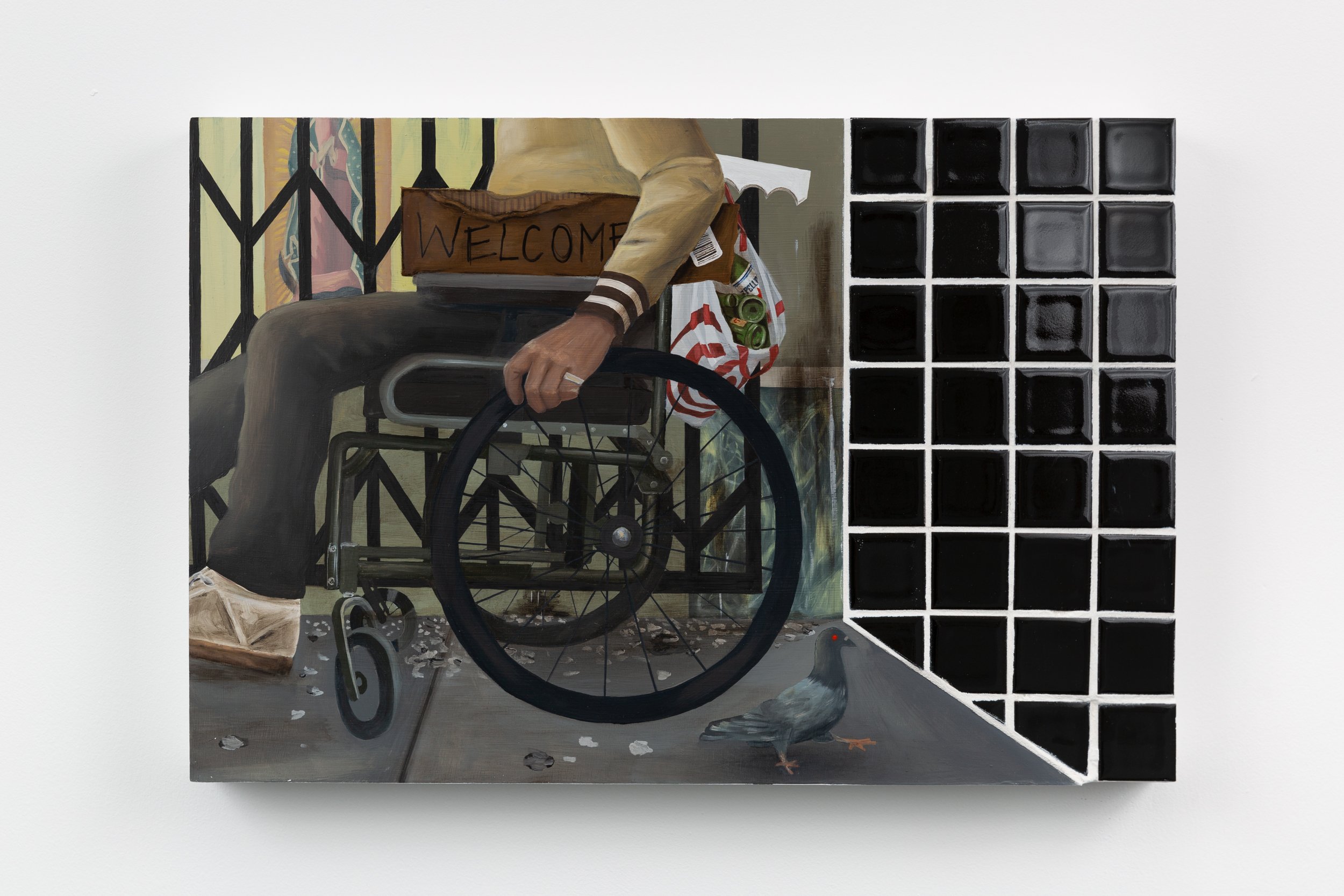 Not Even The Church Wants A Gleaner

In many of the works, Issa combines ceramic tile and oil-painted panels to create images that draw from her own memories and history and focus on situations where people are automatically dismissed, overlooked or passed over because of their race. For example, Get Her Some Water (2022) is an impressive mixed media work depicting a man at the cash register working behind the counter at a 7-11. Visible in the image around the man is a display case with cigarettes and tobacco, as well as 7-11 branded food items. The realistic scene uses offset hand painted square tiles depicting the 7-11 logo as part of the store’s architecture. Issa has spoken about the fact that her father, as well as others in her community, have worked in convenience stores because this was the only position available to them as immigrants. In this piece, she masks the identity of the figure, replacing his face with a blow up of a 7-11 receipt, a record of her actual transaction. Issa calls attention to the erasure of the man’s identity—reducing him to a faceless and easily forgotten attendant performing a service. 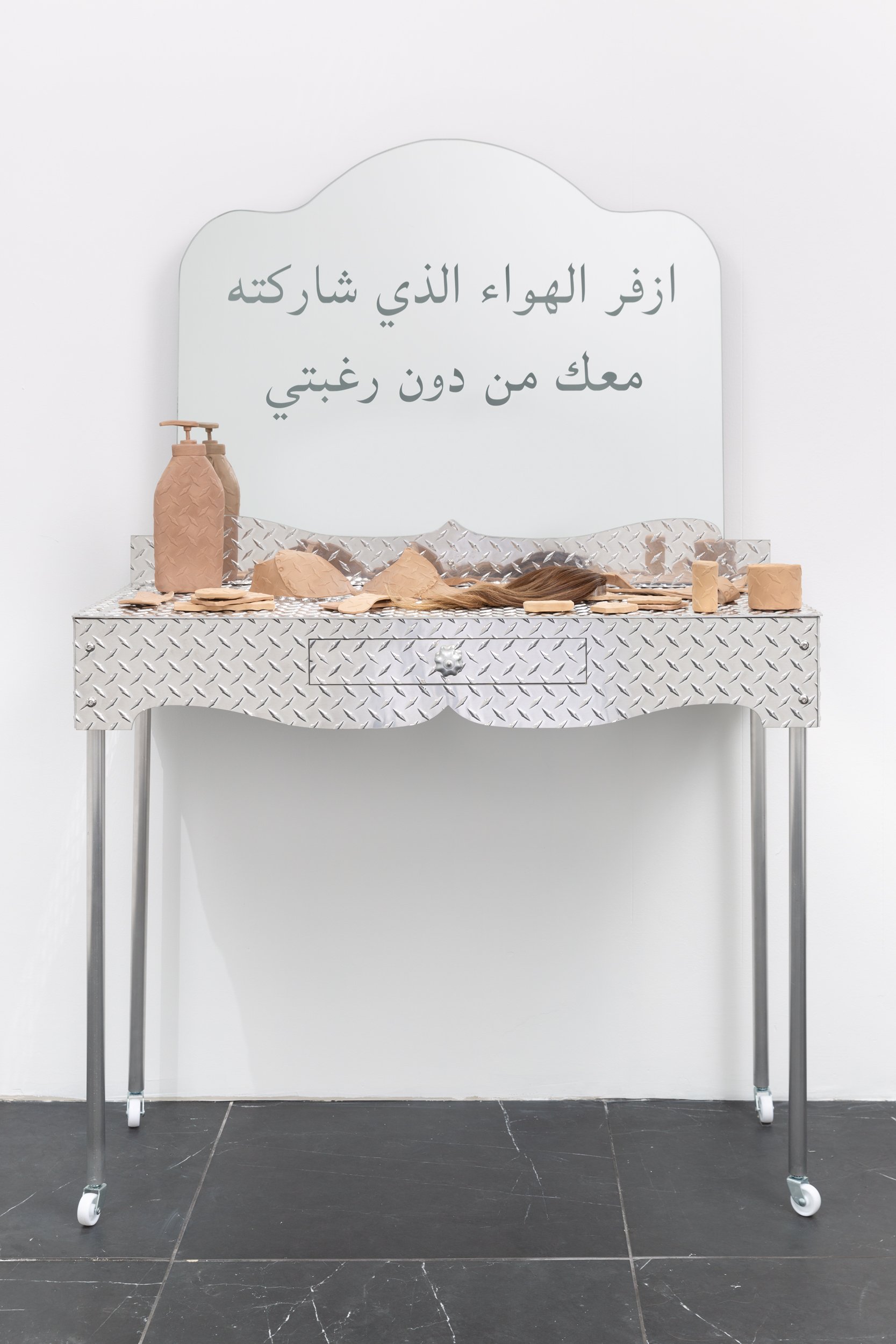 Other items related to consumerism— fragments of cardboard wine cases recreated in ceramic, the shape of the iconic red Marlboro cigarette logo filled with a grid of hand painted ceramic tiles that transform the logo into an Islamic design pattern— are also tied to Issa’s personal life. Drunk White Men At Parties, Tell Me They Love Me (2022) reproduces in ceramic four separate squares with ragged edges as if torn from the top of a corrugated cardboard box. The brand of the Pinot Noir— Meiomi —is hand painted on the tiles, juxtaposed with intricately drawn interlocking Islamic geometry. The work references Issa’s experience as the ‘exotic other’ at parties in the United States. Portrait of Father similarly draws from conflicting cultures and merges East and West, as Issa likens the Marlboro chevron to the shape of a prayer niche, or mihrab. 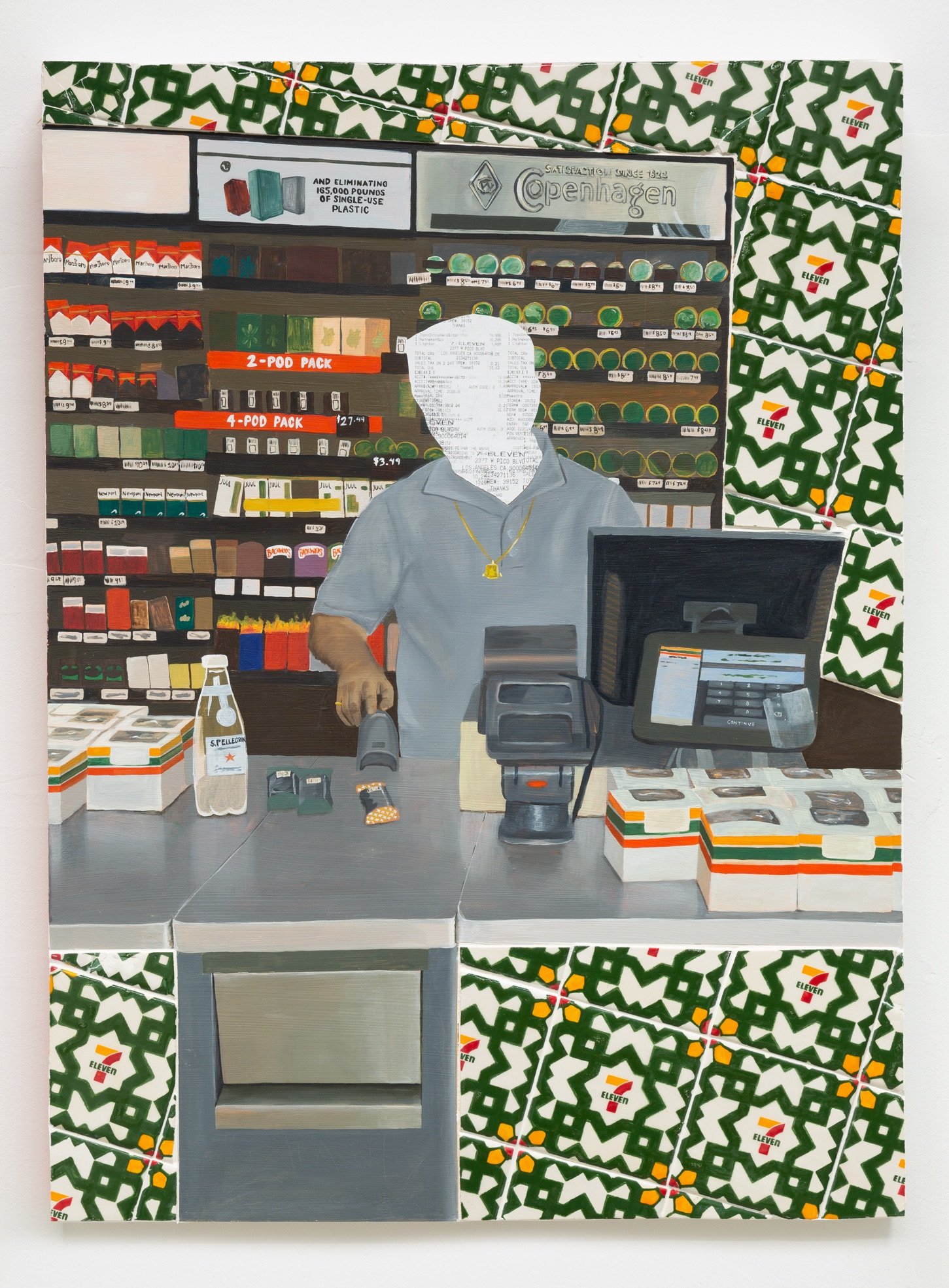 Get Her Some Water

Placed alone in the side room is the enigmatic sculpture Men Look At Women, Women Watch Men Look At Them (2022), a metal vanity and mirror covered with women’s underwear, cosmetics and toiletries. The vanity has been fashioned from shiny metal embossed with diamond shaped non-slip tread. The objects are made from unglazed clay and covered with this same texture, which is meant to provide safety. Issa flips the notion of safety on its head, creating a work about vulnerability, desire and the boundaries imposed on many women of Islamic descent. 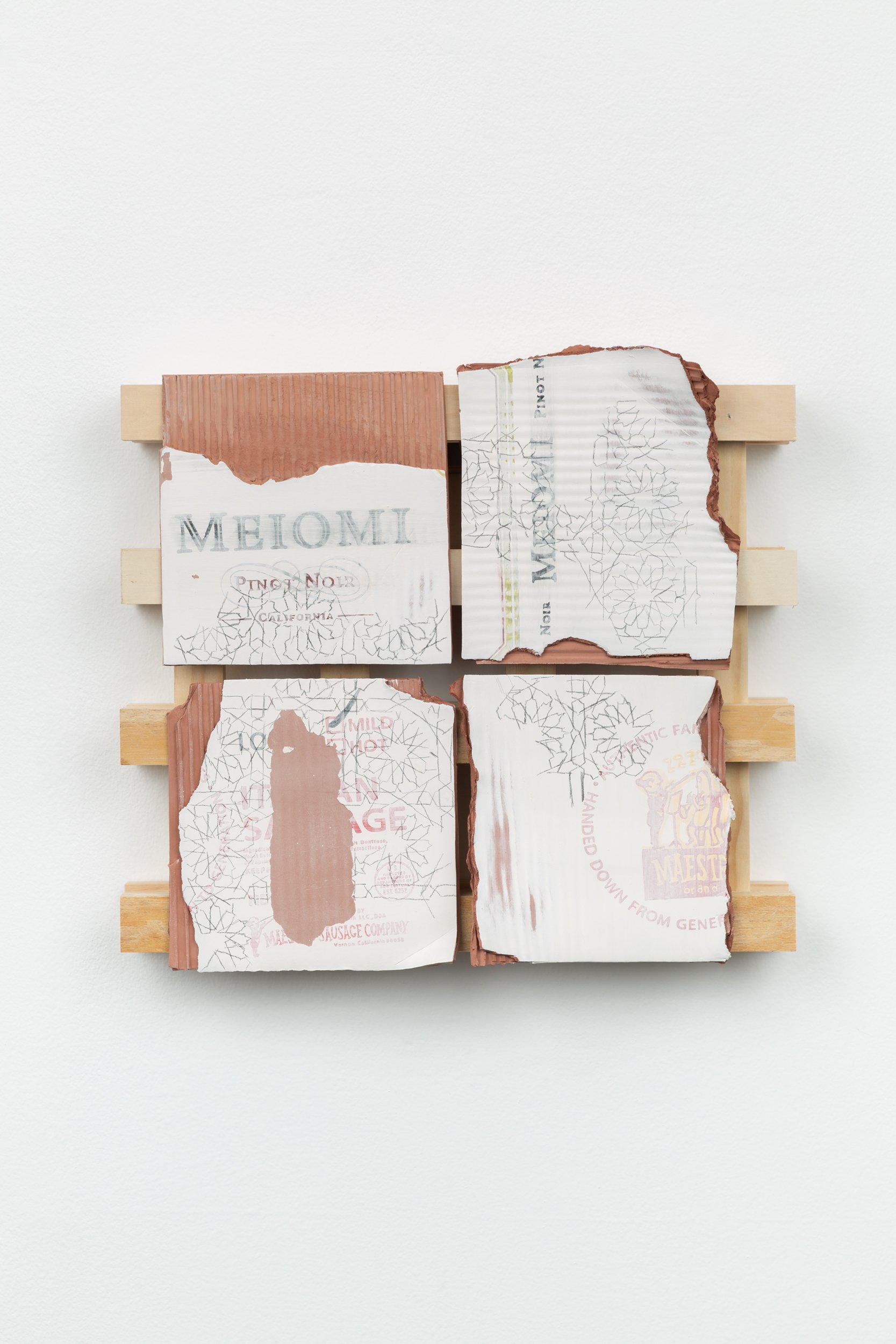 Drunk White Men At Parties, Tell Me They Love Me

Issa is unabashed about her ancestral history and cultural heritage. In her works, she sheds light on the differences between the Middle East and the West, making beautiful and poignant objects that speak to women’s empowerment and challenge notions of identity. She mines her life and memories stating, “I reinterpret domestic objects that reference my personal experiences to religion, politics, and parallels of the East and West. My work is a representation about my personal experiences of displacement, identity and social issues.”