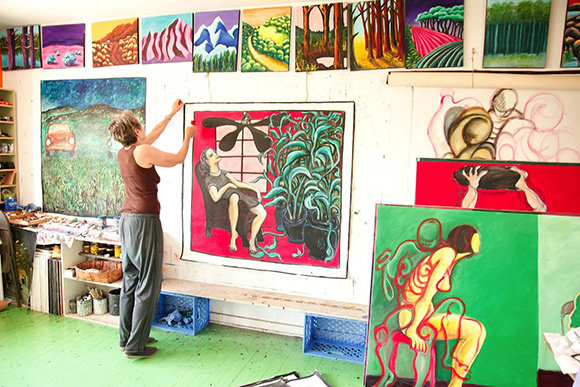 Warhol and Roger Corman B-movie cult queen – and star of such films as Chelsea Girls, Death Race 2000 and Rock ‘n’ Roll High School – writer of books that include Snake, Blind Love, and Swimming Underground: My Years in the Warhol Factory, as well as an acclaimed figurative painter, the 74-year old icon plumbs her own psychological depths only to discover what makes her love work and life.

What historical art figure would you like to have lunch with? Anybody, even if they’re dead? Well, that’s a loaded question. Definitely not Picasso. And why, because he’s repetitive. Another one I wouldn’t want to have lunch with is Michelangelo.

What did you purchase with the proceeds from your first sale? I didn’t purchase anything. I put it in the bank. I don’t spend money. Other people spend money, but I don’t. What words or phrases do you overuse? Do you really want to know this? Cunt, dick, fuck-face, and fucking moron.

How do you know when a work is finished? When I don’t paint on it anymore. When and where were you happiest? Wow, that’s another loaded question. First of all, I am not prone to happiness. Second of all, if I were happy, I would worry about my brain. I’d worry about being a fucking moron – especially now, in this time. There’s nothing I can see that would make anyone happy. In the past, I was a lost baggage child and when my brother came – he’s eight years younger – I was happy. He was great. He is great.

What is your most treasured possession? My brain.

Where is your ideal escape destination? My imagination. What TV series from your youth best describes your approach to life? From my youth and not shows that I was in, because I was in a bunch of movies and I have been in TV series, but I don’t remember them – they were too short-lived. I didn’t like TV and I don’t watch TV, but I did work in it. What I liked was being Miss Togar, from the Ramones‘ movie, Rock ‘n’ Roll High School. I liked doing that movie. I also liked Eating Raoul with Paul Bartel, but the best were the Warhol movies.

If you could change one thing about yourself, what would it be? My brain.

What is your most treasured memory? I don’t have treasured memories. First of all, memories are haunting, and second of all, they’re like puzzles you can’t fix, so they’re really annoying.

What makes you cry? Sad operas, but more so, my mother. She was very beautiful and she didn’t talk. She was a 50s housewife who was pathetic.

What is your go-to drink when you toast to a sale? The most expensive liquor I can find, because someone else is buying.

After an all-nighter, what’s your breakfast of champions? What’s a fucking all-nighter? I thought you meant sex, because it doesn’t take me that long. That’s it, that’s my answer. Who inspires you? Everybody. There are a million people I like – Bacon has inspired me. I love Bacon, but in reading and writing – it’s insane the number of people who inspire me, though I’m not too great, as you know, on poetry. It’s really interesting how some people inspire me…because I hate them so much.

What’s your best quality? My best quality – that sounds like, ‘Oh, I’d love to dance the waltz.’ You really don’t want to know my best quality. It’s bad, because I’m not a great person, but it’s my hatred of everything. It’s like having a rash and you can’t scratch it. Okay, so my best quality is my fucking temper and that I’m very, very hateful.

What’s your biggest flaw? Flaw? I’ve never thought about my flaws, but I should make a list. And my biggest – as in size? I suppose my biggest flaw would be the men I married. There were just two of them, because I’m a quick learner. I got it.

If you could change one thing about yourself, what would it be? I’d like to live longer. Maybe I don’t want to live longer – it’s getting really fractured today. I know that I don’t like being younger. That’s not good. I like my age – it’s amazing – and it gets better and better. One thing I would change about me or about the world? Oh, I don’t want to change anything. Are you nuts?