Kevin Beasley: ‘On Site’
Infused with a Tragic History 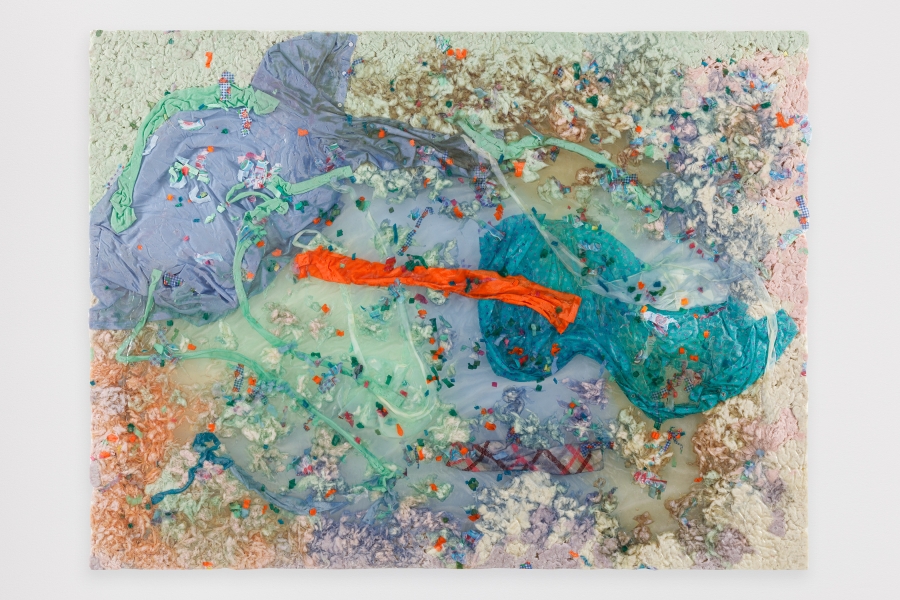 In conjunction with his exhibition at Regen Projects, Kevin Beasley has positioned speakers on the rooftop of the gallery. Outside, the soundtrack blends in with the street noise of Santa Monica Boulevard, but inside, viewers become aware of a collage of field recordings from various locations. Speakers are scattered through the interior connected by drooping wires that lead to a home-made utility pole —The Source (all works 2022) — situated in the back space. The Source is a grounded, mixed media sculpture that extends from floor to ceiling. In many ways, it is the anchor of the exhibition. Wires, steel pipe, lights, speakers, a cooler, as well as a pair of Nike sneakers and a bottle opener are suspended from its appendages. This ad hoc looking structure radiates sound, light and power. Earlier this year, Beasley erected a similar sculpture in the Lower Ninth Ward as part of Prospect New Orleans, where it provided light, as well as a wi-fi hot spot to the area. 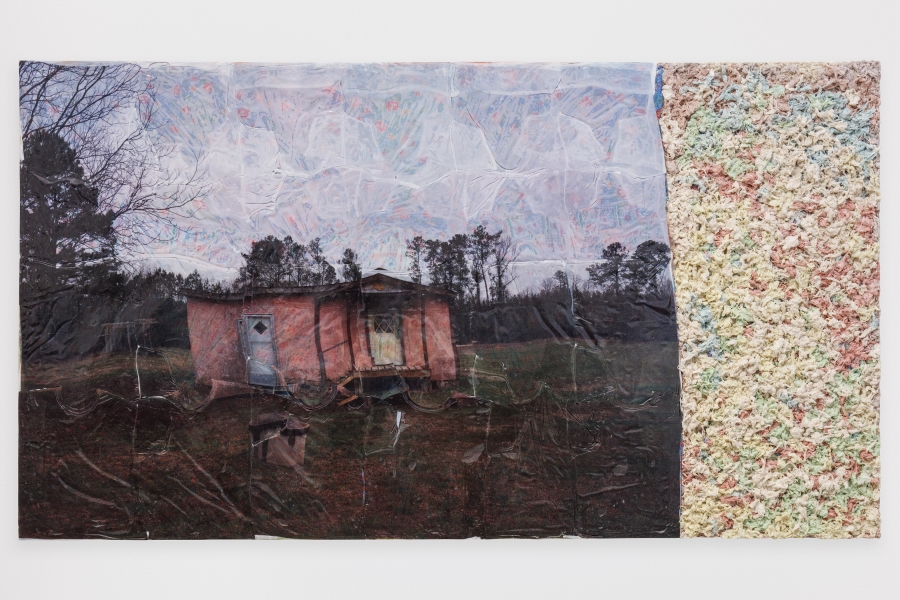 Surrounding this sculpture are large-scale, wall-based reliefs made from dyed raw cotton and cut up clothing, encased in clear resin. As the content of Beasley’s work is steeped in the history of the American South, as well as his childhood memories growing up in Lynchburg, VA, it is not a surprise that he would work with cotton. While his site-specific installations and mixed media pieces are socially motivated and concerned with relational aesthetics, the works created for gallery exhibitions delve into process and materials— specifically cotton— which have a sordid history with respect to the American South. Called Slabs, these abstract and colorful works are simultaneously flat, bumpy, opaque, semi-transparent and filled with gaps that reveal the wall behind them. 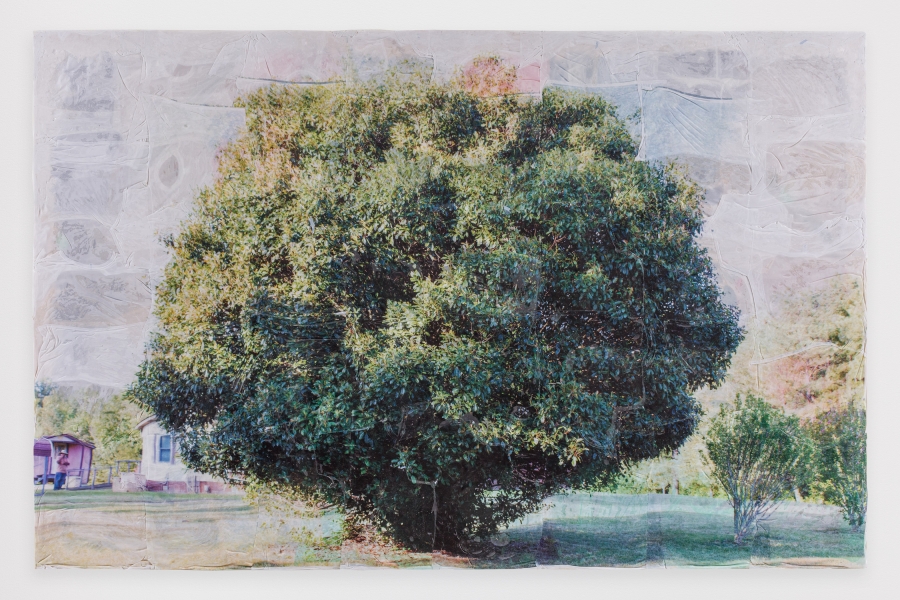 Site VIII is comprised of areas of light green, dyed cotton that could be seen as the banks of a shallow stream filled with floating fragments of clothing— bright blue house-dresses and t-shirts— suggesting something discarded or left behind. Similar materials— floral patterned housedresses, as well as shredded garments— are combined in In my dream I saw a landscape, to become a birds eye view of an ambiguous terrain. In addition to these non-representational reliefs in the front gallery, Beasley also presents works filled with t-shirts that are used as a ground for photographic images. 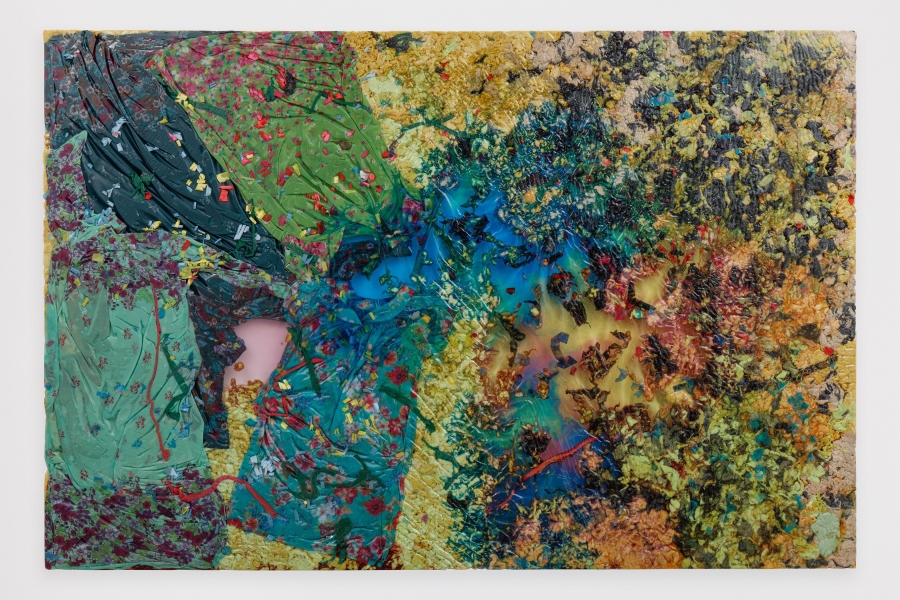 In my dream I saw a landscape

For example, Wood Shed (on improvisation) features a distorted photograph of a light pink shed surrounded by a field and distant trees that is situated on Beasley’s grandparent’s property in Virginia. This rumpled image is juxtaposed with a hardened mass of raw cotton, some dyed in hues that parallel the colors in the scene. In the center of Grace is a photographic image of a large leafy tree, perhaps referencing the lynchings that occurred in the South. 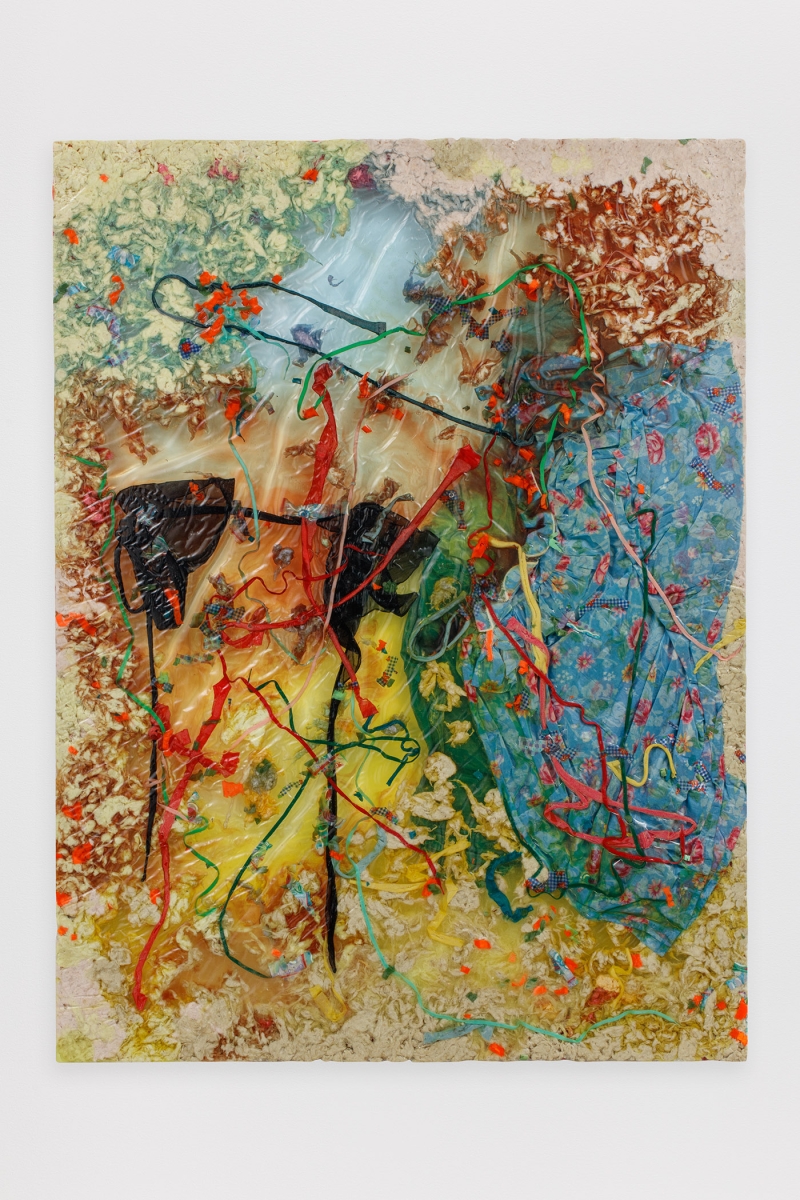 In the enigmatic le mémorial, a photograph of sea water breaking on rocks (printed onto a grid of t-shirts) appears like a passageway or a door in a large wall of pink-toned cotton. The image was taken looking out from Robben Island where Nelson Mandela was imprisoned. It also references an important location on an African diasporic tour: Ghana’s Door of No Return, through which so many stepped as they were forced onto slave ships headed across the Atlantic. Beasley states, “There’s this conflation between these spaces that’s also about a beautiful pink view. The glorious ocean vista, an unmarked grave for the millions who died during the Middle Passage, becomes a memorial.” 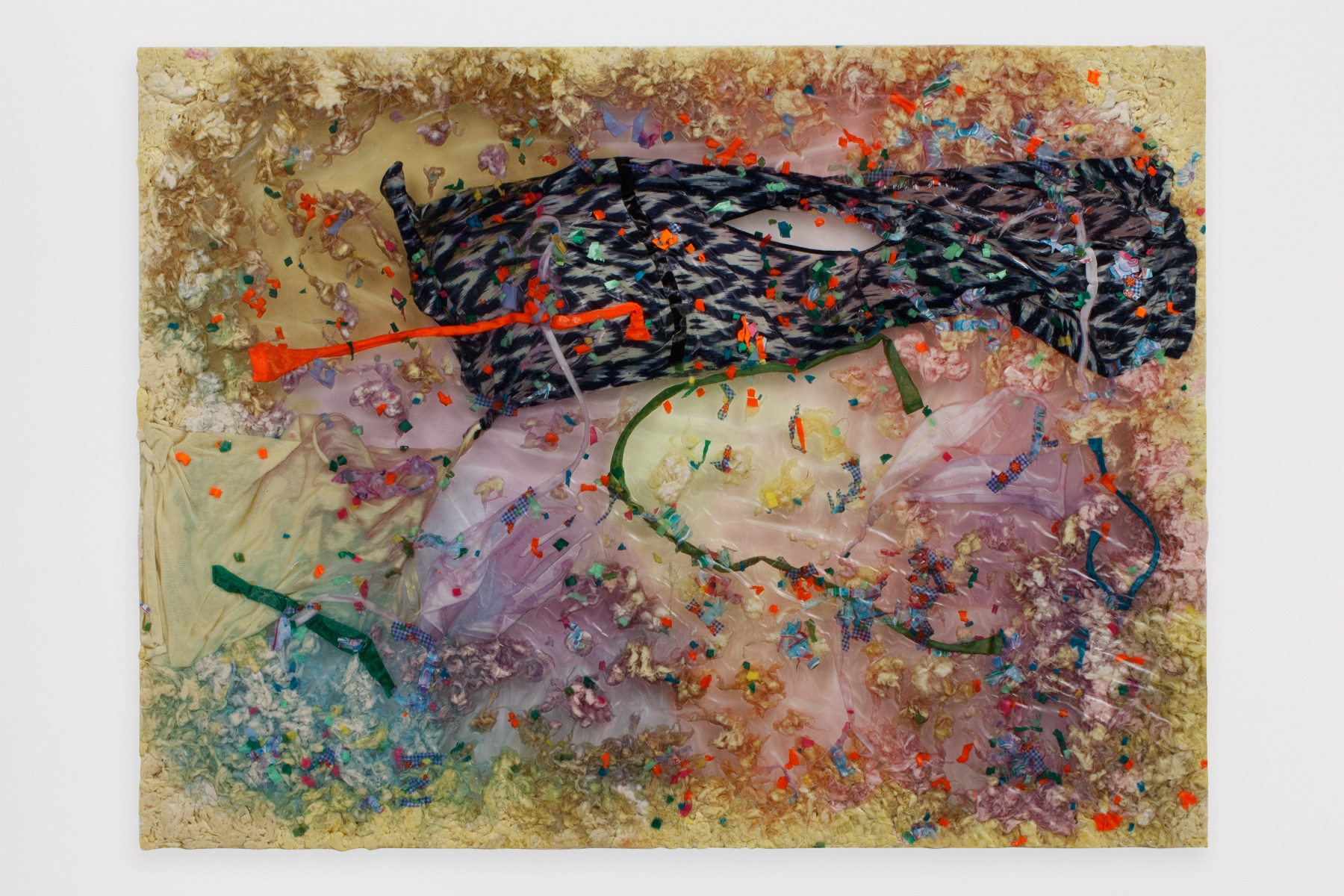 It is hard not to think about the bathtub in Jacques-Louis David‘s painting The Death of Marat (1793) when circling Beasley’s floor-based sculpture the last bath. The empty tub sculpted from raw Virginia cotton and clear resin suggests a sarcophagus and signs for those who have disappeared, a reminder of all too many senseless deaths. Beasley’s complex works are beautiful to regard, and heart-wrenching to think about as he infuses them with a tragic history through this loaded material. 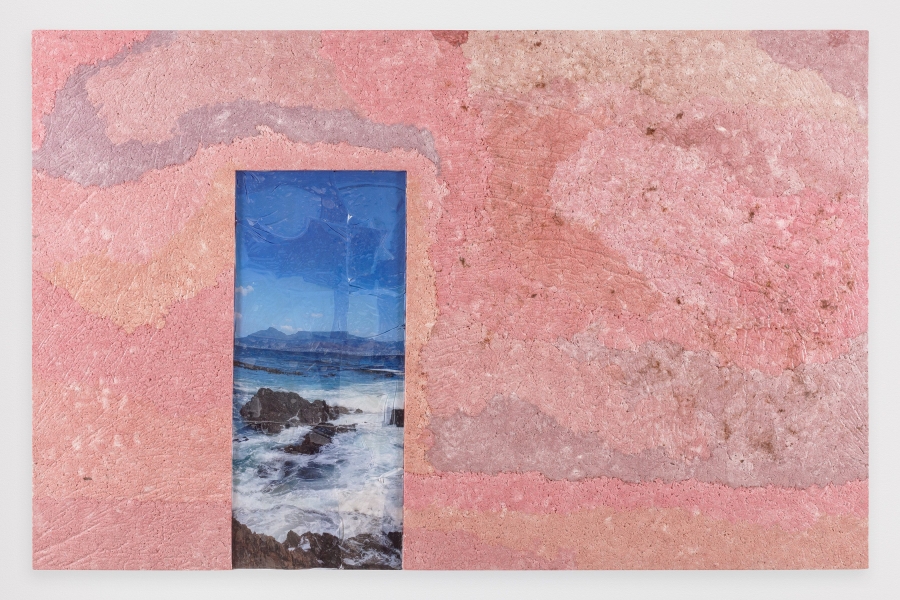