The Broad Announces Two Spring Exhibitions, Takashi Murakami: Stepping on the Tail of a Rainbow and This Is Not America’s Flag 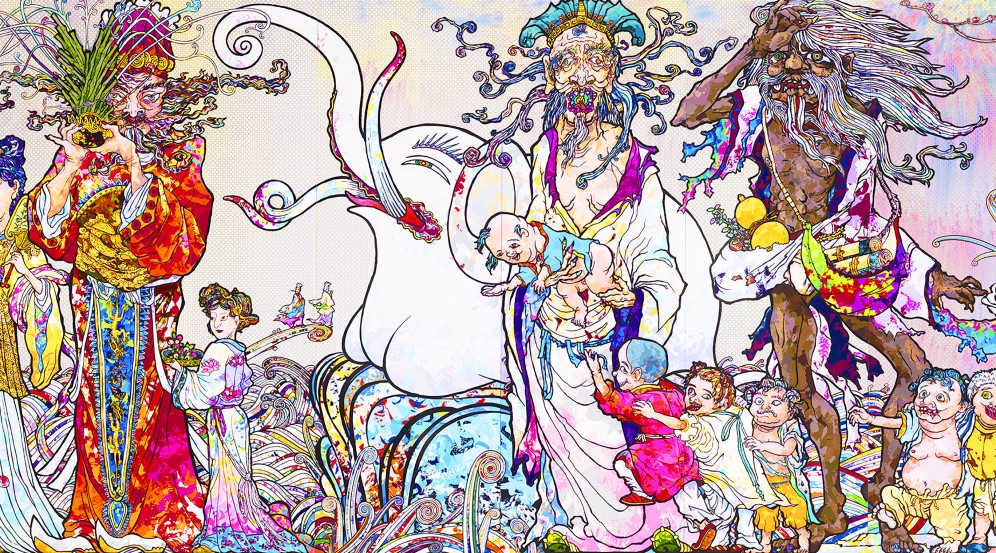 Takashi Murakami, In the Land of the Dead, Stepping on the Tail of a Rainbow (detail), 2014. Acrylic on canvas. The Broad Art Foundation. © 2014 Takashi Murakami／Kaikai Kiki Co., Ltd. All Rights Reserved

The Broad has announced two new exhibitions, Takashi Murakami: Stepping on the Tail of a Rainbow and This Is Not America’s Flag, both running from May 21 to September 25, 2022. Murakami’s first monograph exhibition at the museum will feature 18 works, as well as immersive environments developed in tandem with the artist and his studio, Kaikai Kiki Co., Ltd., and will include the entirety of The Broad’s collection of the artist’s works. Featuring over twenty artists, This Is Not America’s Flag will spotlight the myriad ways artists explore the symbol of the flag of the United States of America, underscoring its vast, divergent, and complex meanings. Additionally, Murakami’s exhibition will coincide with the release of a catalogue that considers the artist’s practice through the Broad collection and key loans. Published by DelMonico Books, The Broad, and Kaikai Kiki Co., Ltd., the catalogue will feature essays by The Broad Curator Ed Schad, Pico Iyer, and a conversation with Murakami.

“Artworks in these exhibitions speak to recovery, resistance, and even beauty in the face of deep social and environmental upheaval,” said The Broad Founding Director Joanne Heyler. “Our dual pandemics of racism and COVID-19 lay bare many myths embedded in modern American identity. This Is Not America’s Flag contemplates the state of national symbolism, shines light on U.S. history and present, and questions perceptions, asking vital questions about what we stand for as individuals and as a society. Takashi Murakami’s work likewise reflects within its complex iconography a response to times of crisis and uncertainty, whether connected to postwar Japan or the Fukushima nuclear disaster. By re-visiting some of his most beloved and well-known works, contextualized within onsite environments developed for The Broad, the logic of Murakami’s work in Takashi Murakami: Stepping on the Tail of a Rainbow offers an inspiring sense of continuity and history, and beauty during times of trouble.”

Murakami’s exhibition will allow museum visitors to experience his expansive artistic universe, with both recent works and ones from earlier in his career. Exploring subject matter such as globalization, postwar Japan, pop culture, and religious iconography, the works will span sculpture, painting, wallpaper, and immersive installations. At the heart of the presentation will be two of the artist’s monumental paintings, 100 Arhats (2013) and In the Land of the Dead, Stepping on the Tail of a Rainbow (2014), 32-feet wide and 82-feet wide respectively. Also on view will be the 1999 sculpture DOB in the Strange Forest (Blue DOB), which features Murakami’s iconic anime-inspired character Mr. DOB, one of many figures that the artist has created throughout his career.

Titled after Alfredo Jaar’s iconic 1987 work, A Logo for America, This Is Not America’s Flag will provide a critical discourse on the symbol’s meaning, the complexity and contradictions of contemporary national identity, and artists as active citizens. The exhibition was launched conceptually in the summer of 2020 during the groundswell of activism for racial justice in the wake of the murders of George Floyd, Ahmaud Arbery, and Breonna Taylor and was inspired by two works in the Broad collection, Flag (1967) by Jasper Johns and African-American Flag (1990) by David Hammons. Presenting works from over twenty artists including Laura Aguilar, Nicole Eisenman, Jeffrey Gibson, Hammons, Jaar, Johns, and Hank Willis Thomas, the exhibition includes works that both embrace the flag as the signifier of the nation and its ideals and subvert it—often simultaneously—to express injustices and inequities woven into the fabric of the country, past and present.