Evita Tezeno: ‘My Life, My Story’
Celebrating Family and Relationships 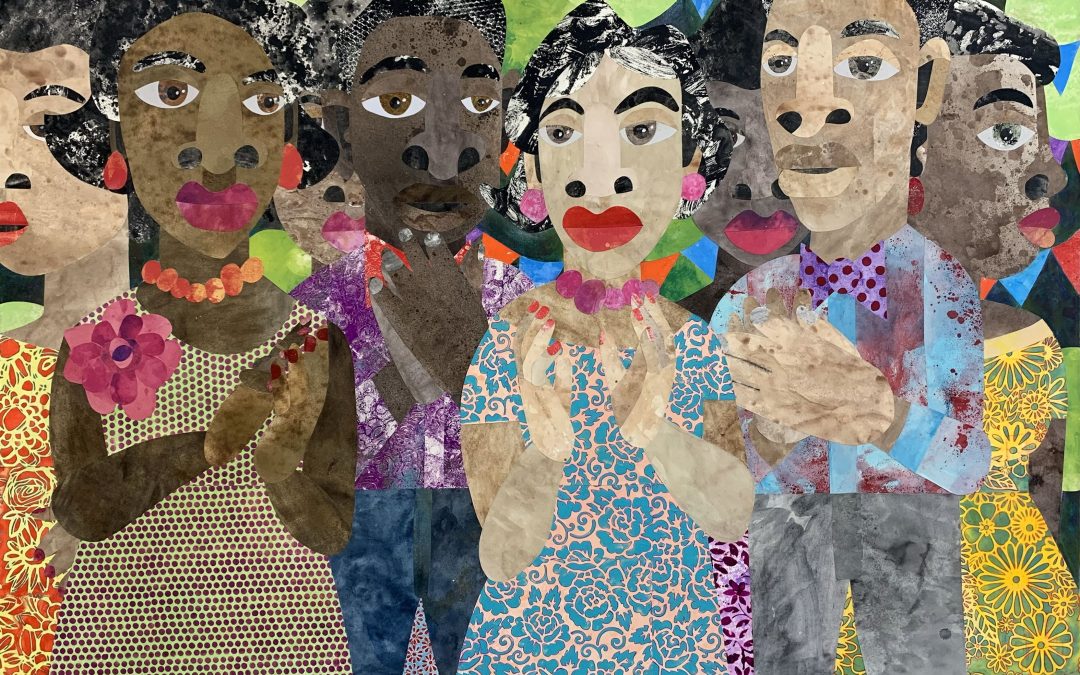 My Life, My Story

Evita Tezeno is a Dallas-based artist whose folksy, mixed media collages combine paint, colorfully patterned paper and occasional objects like buttons to depict a range of characters. In these lush and evocative works, Tezeno explores the everyday life of Black Americans, not seeing hardship, but rather celebrating family and relationships. Many of her portraits are based on people she knows, including friends and family members. While in her previous exhibition she exhibited modest sized paintings and works on paper, for My Life, My Story, she has created her largest works to date, some at a scale of 60 x 48 inches. 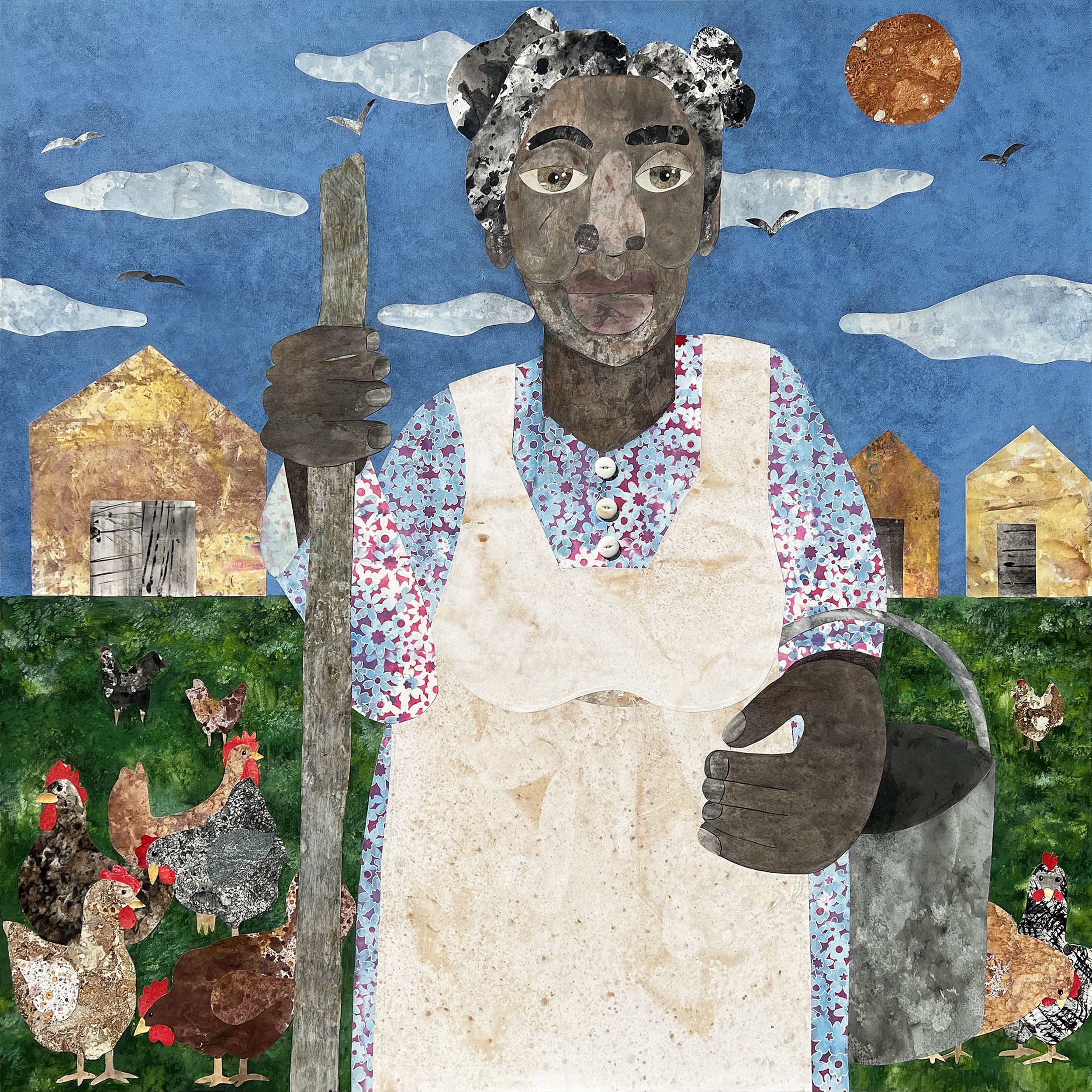 Ain’t Got Nothin’ Else To Do But Work

Tezeno’s process is to paint a wide array of patterns and textures onto paper. She then cuts out the various shapes that comprise faces, bodies and backgrounds from this source material and assembles the elements together. Tezeno shares a kinship with another Texan, Deborah Roberts, who also creates mixed media collages that are filled with composited images of Black children. A major difference in their works, however, is that Roberts leaves the spaces around her figures blank (either black or white), whereas Tezeno’s backgrounds are filled with cutouts that depict interior as well as exterior locations. Both artists draw inspiration from Romare Bearden and Cubism. Tezeno also cites the influences of Elizabeth Catlett and William Johnson, as well as other self-taught artists known for creating works about their communities. 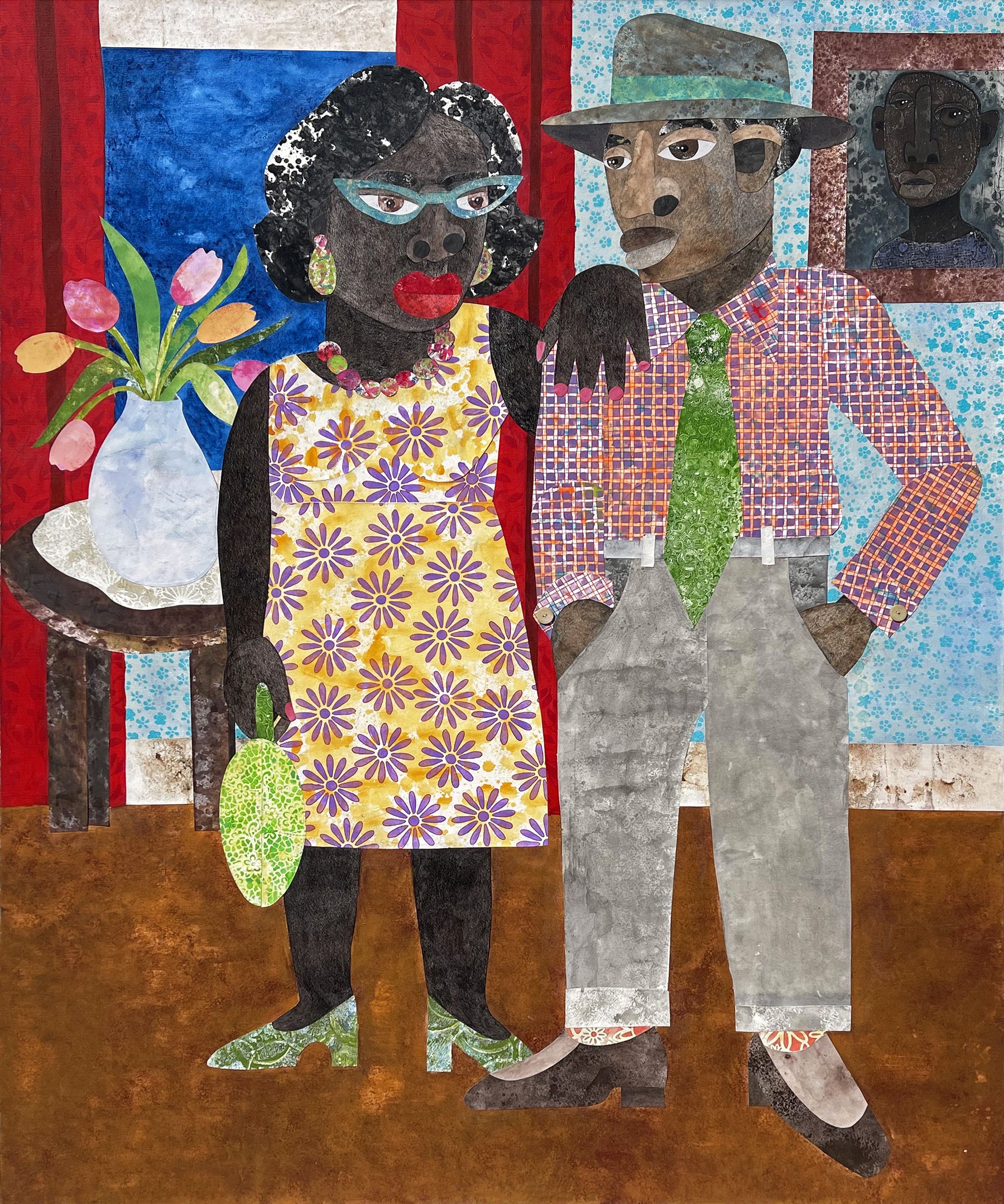 We Are Going to Cut the Rug Tonight!

Tezeno’s painted collages are based on memories and stories passed down through generations and include lovingly crafted depictions of her great grandparents, parents, aunts and uncles. Tezeno remarks that Covid “made me reflect on how rich my history is. I have had my grandparents, I’ve had my great grandparents in my lifetime, and my life has been so full.” 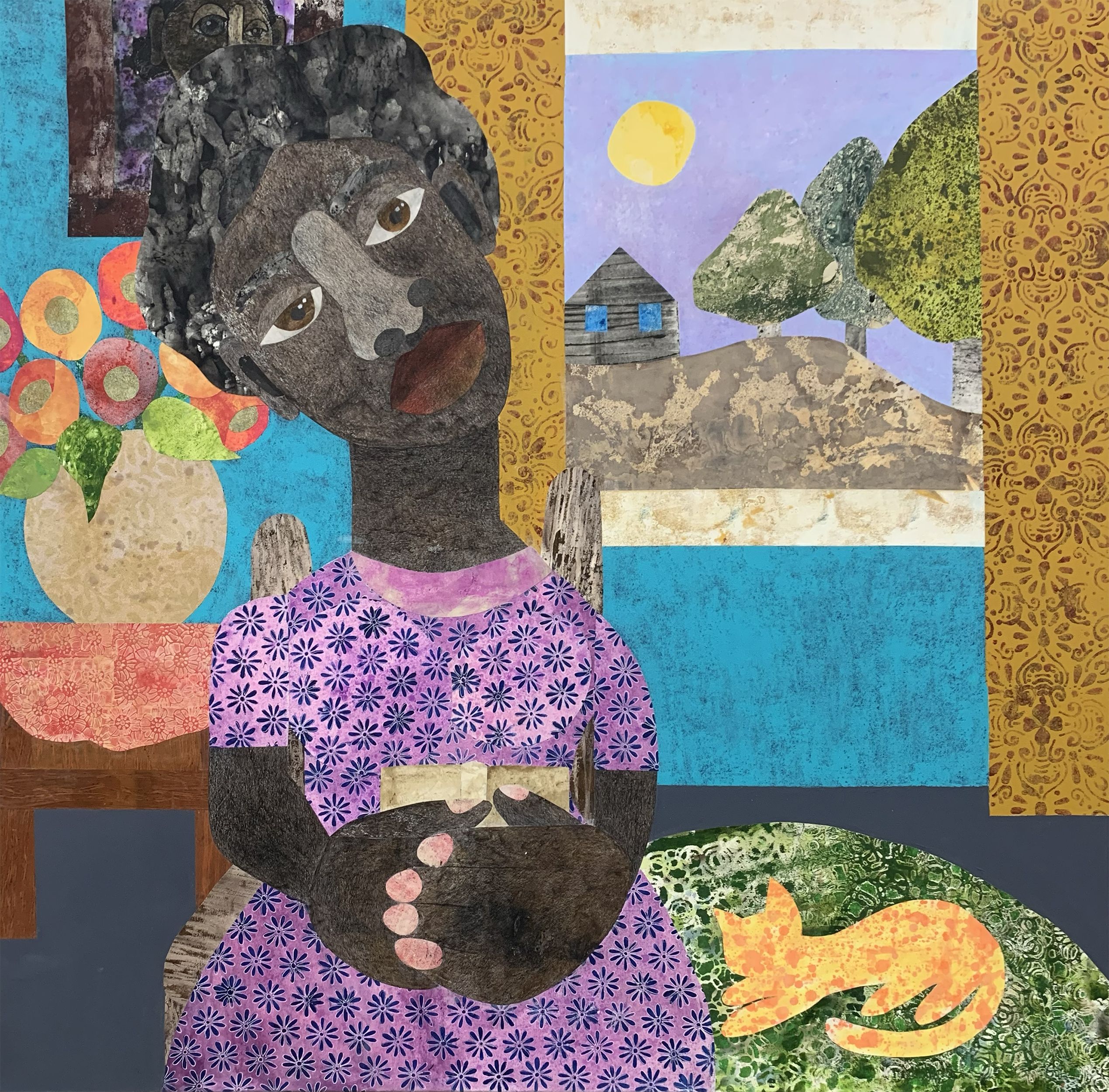 Come and Rest a Little While

Although the paintings are not titled with names or specific relations, it is possible to imagine a history for each character. For example, the strong, stoic, smiling, elderly woman depicted in Ain’t Got Nothin’ Else To Do But Work (2022) is based on Tezeno’s great grandmother who “raised chickens and made teacakes.” In the image, she proudly wears a white apron over a blue flowered frock and holds a stick (perhaps a broom or a rake) in one hand and has a pail draped over the other arm. A row of yellow- brown houses with triangle roofs extends across the horizon, separating a blue cloud- filled sky from the grassy green foreground in which chickens and roosters freely roam. 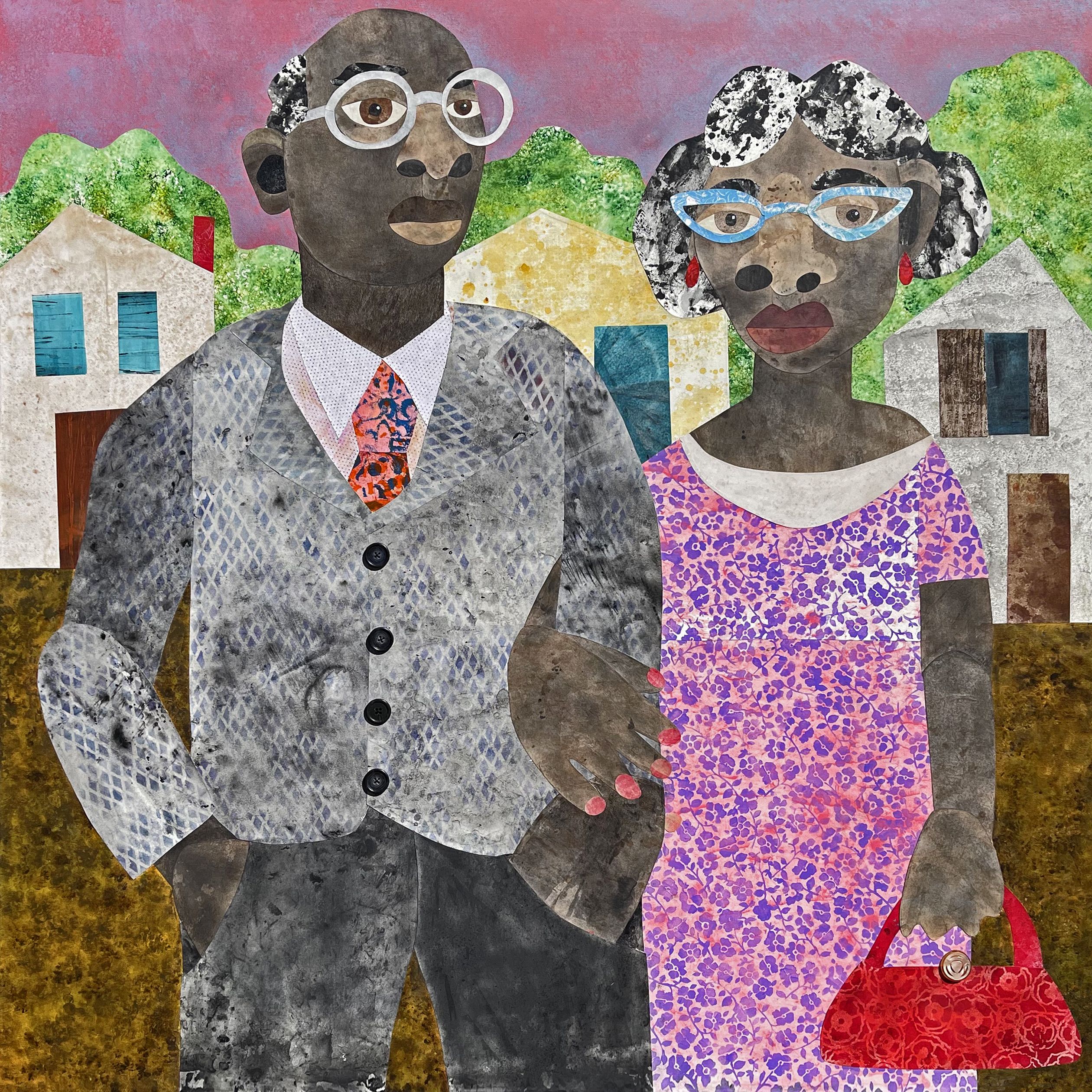 I Still Get Butterflies When You Hold Me Tight

The boy depicted in I Want to Sail the Oceans When I Grow Up is composed of simple shapes. He is centered in the square canvas, filling most of the frame. Wearing a green and yellow striped shirt and in his abstracted collaged hands, he holds a toy sailboat. Behind him is a tree with green leaves as well as a simple house with two windows and a door with a walkway leading out of the frame. He appears to be near a large body of water as striations of blue paper are also collaged behind him. What is most striking about the image is the expression on his face— one of wonder and complacency — as he thinks about his future sailing the oceans. 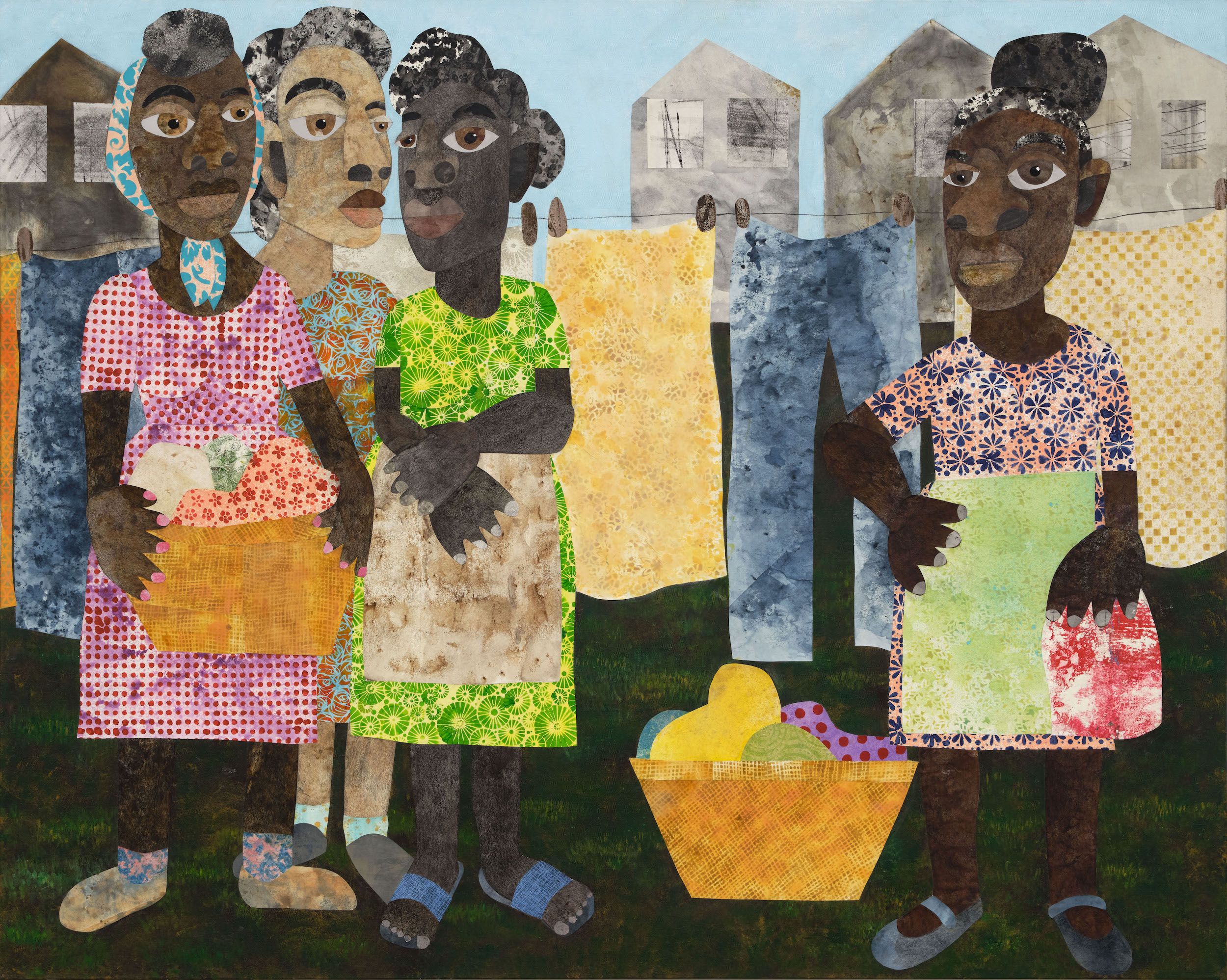 Though many of the images are exteriors, some, like Come and Rest a Little While and We are Going to Cut The Rug Tonight! (both 2022) take place inside. In these works, Tezeno includes walls with intricate patterns that house framed portraits, vases filled with flowers and windows that reveal the world outside. The woman in Come and Rest a Little While stares dreamily as if at rest, her head slightly turned to the side. In her lap is an open book and on the floor beside her is a light brown cat on a green rug who also appears to be napping. In this piece, Tezeno has captured an intimate moment, presenting it with respect and compassion. 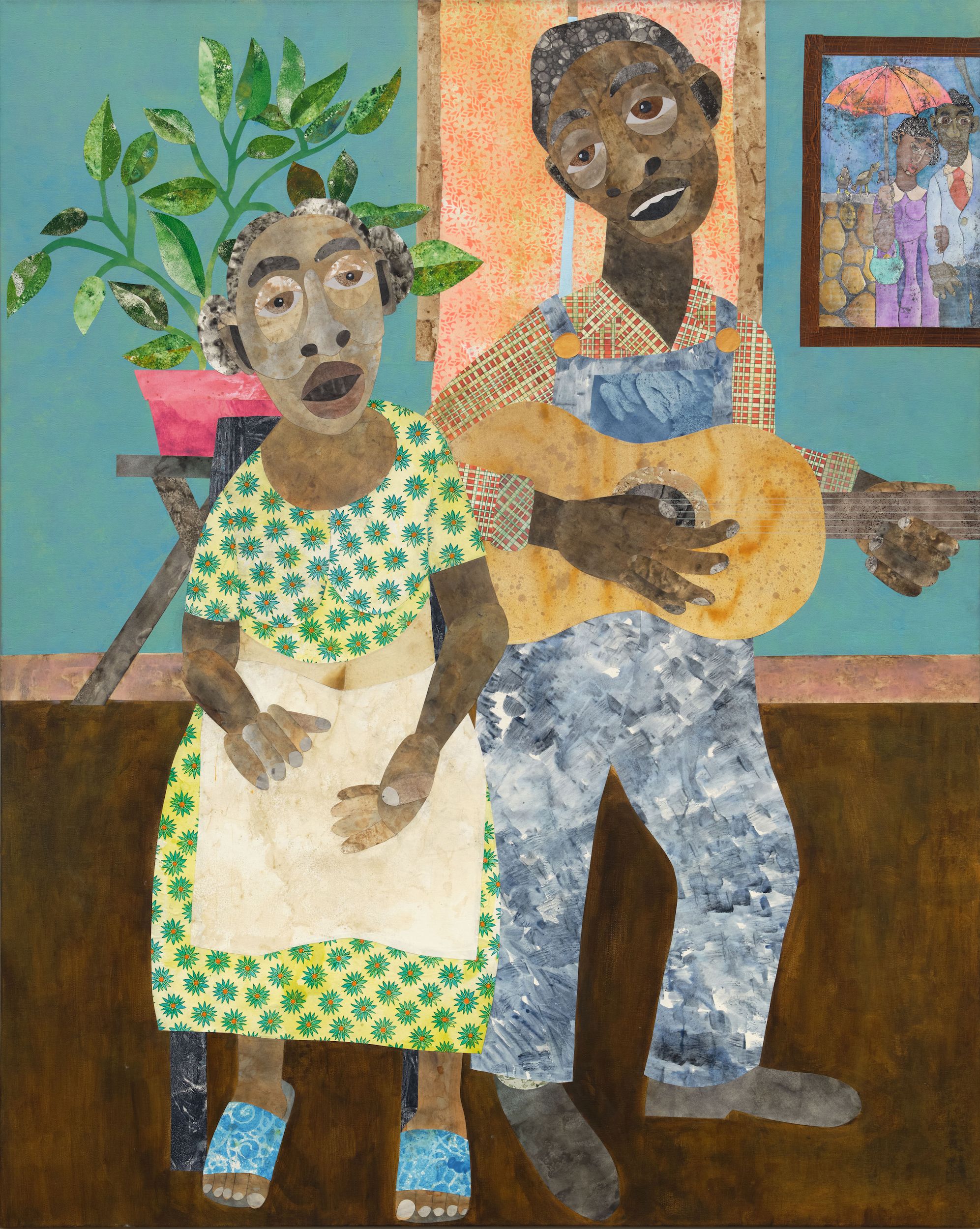 Play Me Some Toe Tapping Music

Tezeno creates scenes of everyday life that have a timeless quality. They could be images of now, or from the past. While representational, they have a folk art quality so they appear simple, yet complex simultaneously. The works are composites filled with an array of different materials. Whoever these figures may be, they round out Tezeno’s story and illustrate a vital community.