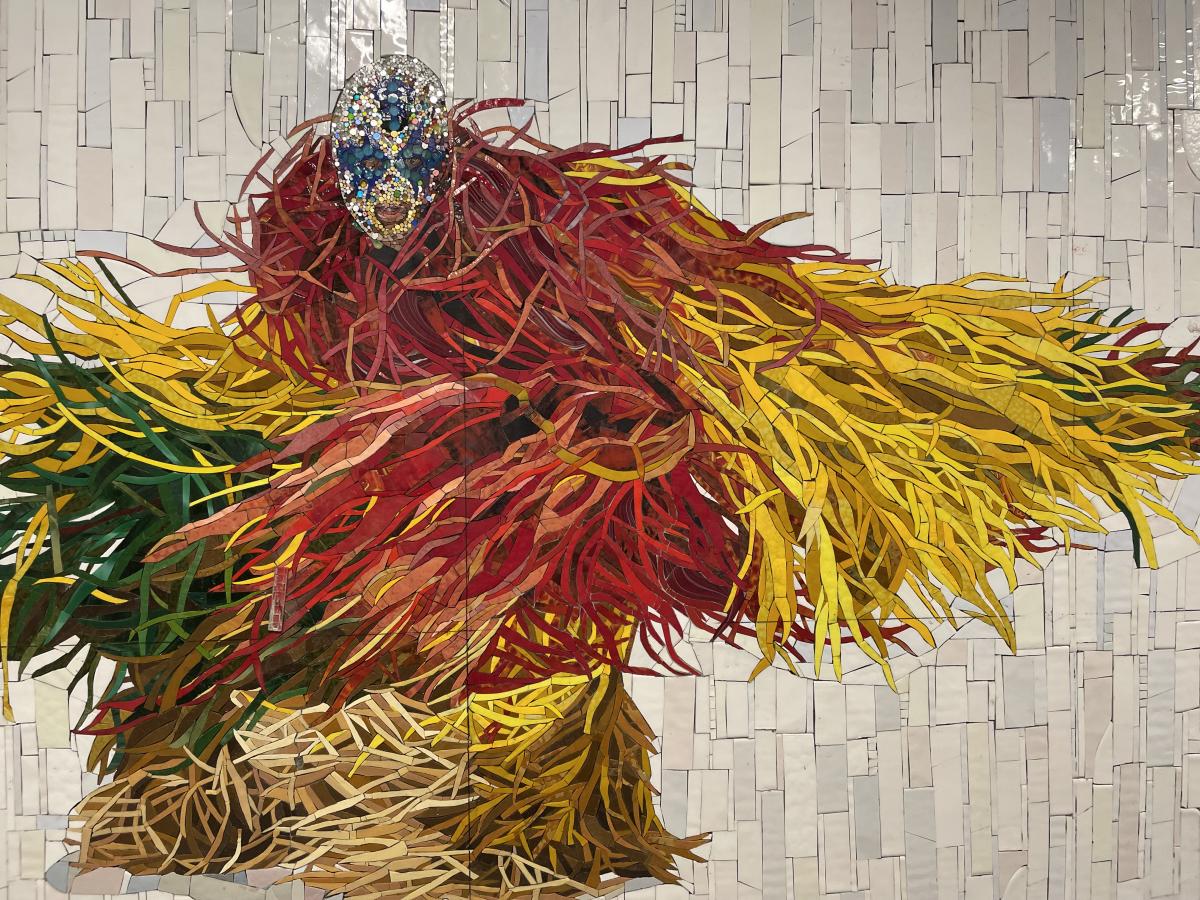 "Each One, Every One, Equal All" by Nick Cave at NYCT Times Sq-42 St Station. Photo: MTA Arts & Design

“Every One,” the first and largest section of Nick Cave’s new permanent project, “Each One, Every One, Equal All,” is now on view in the 42 St Connector. Comprising mosaic and video, “Every One” runs the length of the new in-system transfer passage linking Times Sq-42 St (from the 42 St Shuttle platform) and Bryant Park.

Cave states: “Times Square is one of the busiest, most diverse and fabulously kinetic places on the planet. For this project I took the above ground color, movement, and cross-pollination of humanity, bundled it into a powerful and compact energy mass that is taken underground. ‘Every One’ places the viewer within a performance, directly connecting them with the Soundsuits as part of an inclusive community of difference.”

Cave is best known for his Soundsuits, wearable sculpture which camouflage the body within, creating a second skin to conceal race, gender and class, freeing the wearer and forcing the viewer to look without judgment. With references to African ceremonial costumes and masks, armor, couture fashion, and Carnival, Cave’s elaborate armatures offer both protection and freedom when worn. Constructed from everyday objects and found materials such as colored hair, crocheted doilies, buttons, beads, fabric, raffia, twigs, toys, and trinkets, the sounds produced by the suits through activation give the artworks their name.

“Every One” runs 360 linear feet and covers over 3,200 square feet. It includes more than two dozen Soundsuits, some larger than life and bursting with joy. Cave’s design uses recomposed source photos of Soundsuits, taken by James Prinz. The outcome defies the static form of mosaic and becomes animated by the movement of individuals passing by. Like the suits themselves, the installation’s shifting scale and perspectives test the boundaries of visibility. Even in their ability to delight, there is power and command in their presence.

Cave’s Soundsuits are also brought to life in a companion video piece of the same name. “Every One” is displayed frequently on eleven OUTFRONT liveboard digital screens, centrally located in the 42 St Connector. The video depicts the Soundsuits, many of which can be seen in the surrounding mosaic, fully activated by the movement of dancers.

The art and architecture engage the customer in a colorful visual journey between the stations at Times Square and Bryant Park, two iconic locations. Colors within the glass mosaic are mirrored in the architectural finish on the corresponding South wall. The design for the ceramic tile color-banding was created by the artist in tandem with the 42 St Connector architects, di Domenico + Partners. Commuters and tourists are invited to marvel in the expression of color and movement now permanently part of the Times Square experience.

“Every One” will be joined by two additional mosaics, “Each One” and “Equal All,” also fabricated by Mayer of Munich and scheduled for installation at Times Sq-42 St next year. When complete, “Each One, Every One, Equal All” will be nearly 4,600 square feet total, Cave’s largest permanent public art to date as well as one of the largest mosaic project in the New York City Transit system.