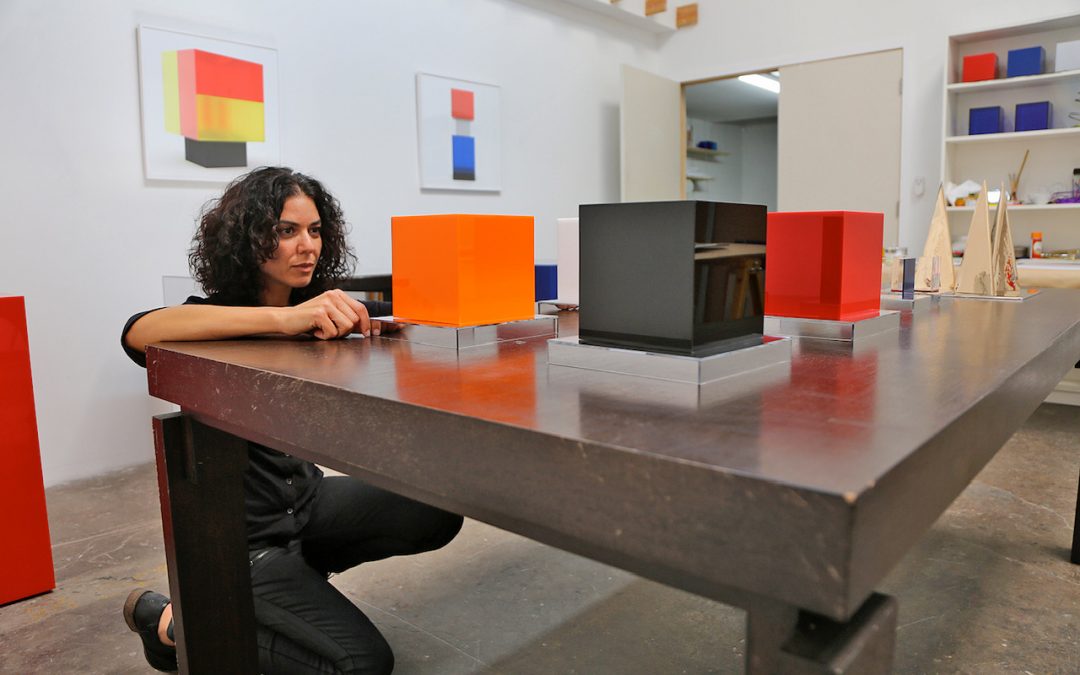 The Los Angeles-based contemporary artist whose engagement with color, light, reflection and geometric forms that are on a continuum connected to the 1960s Light and Space movement –  and whose work has taken her to Paris, Ibiza, Northern India, Southeast Asia and Tel Aviv, during which time she has continued investigating the intersections of art and science as evidenced by her sculptures, installations and immersive environments – plumbs her own psychological depths only to discover what makes her love work and life.

What historical art figure would you like to have lunch with and why? Louise Bourgeois. Not only would she be an exceptional conversationalist, she is the first female artist I was enamored by as a young woman when I learned about her work. Her combination of capability and feminine strength embodies a 21st century foundation for all female artists. 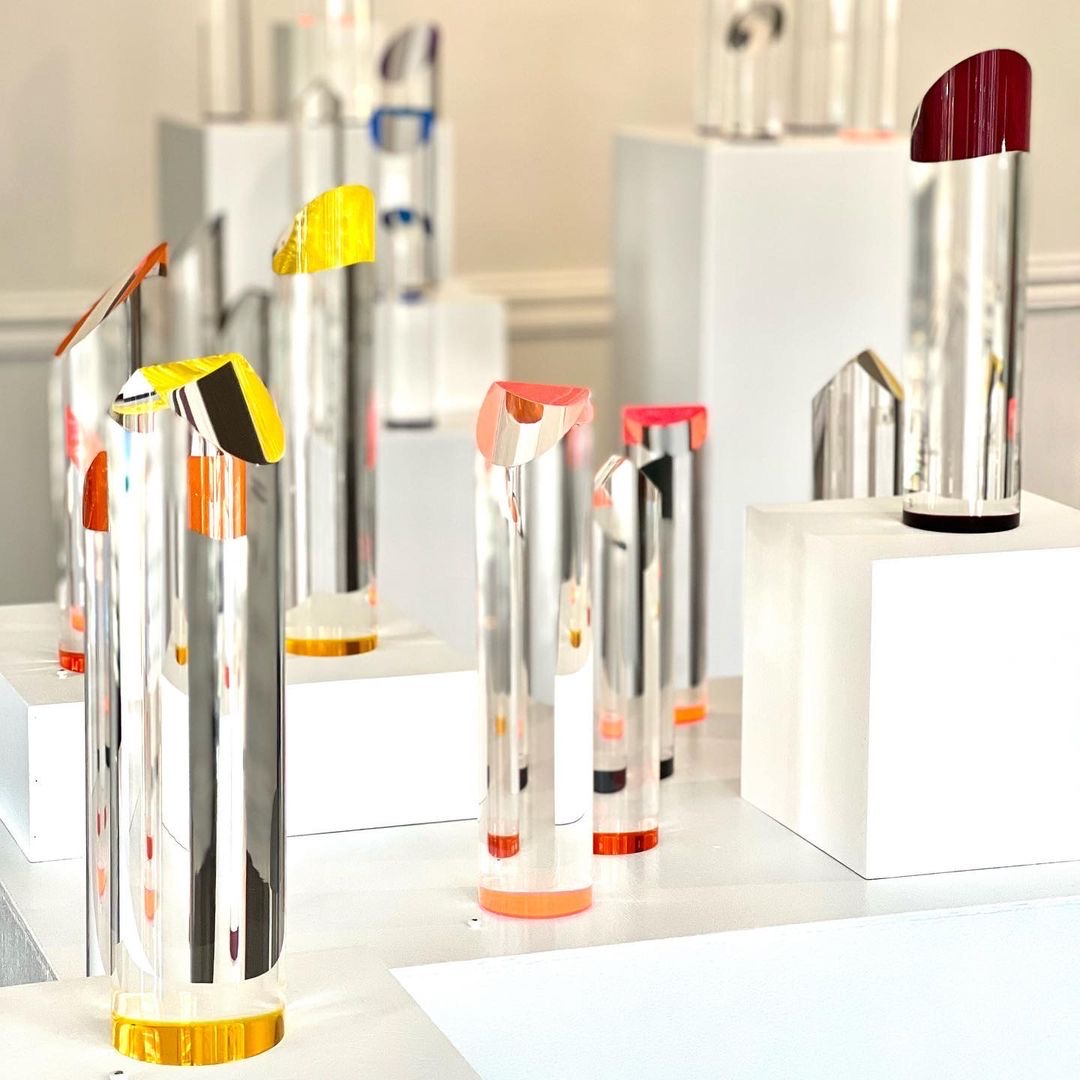 What did you purchase with the proceeds from your first sale? That was easy to decide. I bought more materials to make more artwork. I’m a big believer that if you cannot invest in yourself you cannot expect others to do so. When in the studio surrounded by inspiring materials (which need to be purchased) the creating comes naturally.

What words or phrases do you overuse? Super . . . anything. Super fun, super cool, super annoying, super beautiful. As an exchange student at Parson’s School of Design in Paris, one of my favorite phrases in French was “C’est super cool!” so I translate it into English at any opportunity. 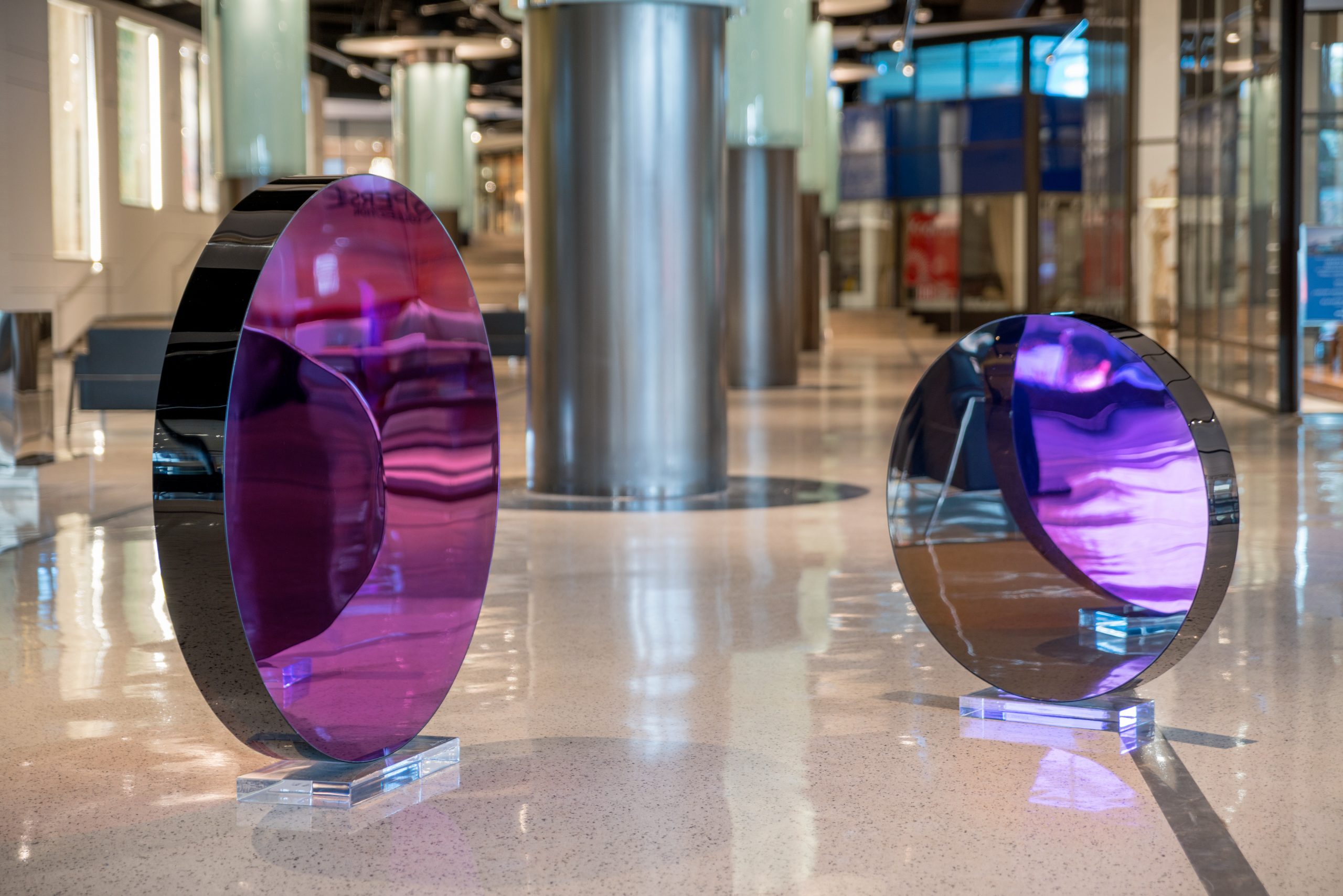 How do you know when a work is finished? When its energy sings to you. There is a moment when the artwork itself takes on a life of its own and the artist is no longer needed.

When and where were you happiest? Either alone in nature or creating in the studio. Both are really the same sensation.

What is your most treasured possession? My courage which enables me to embrace, release and adjust as needed. 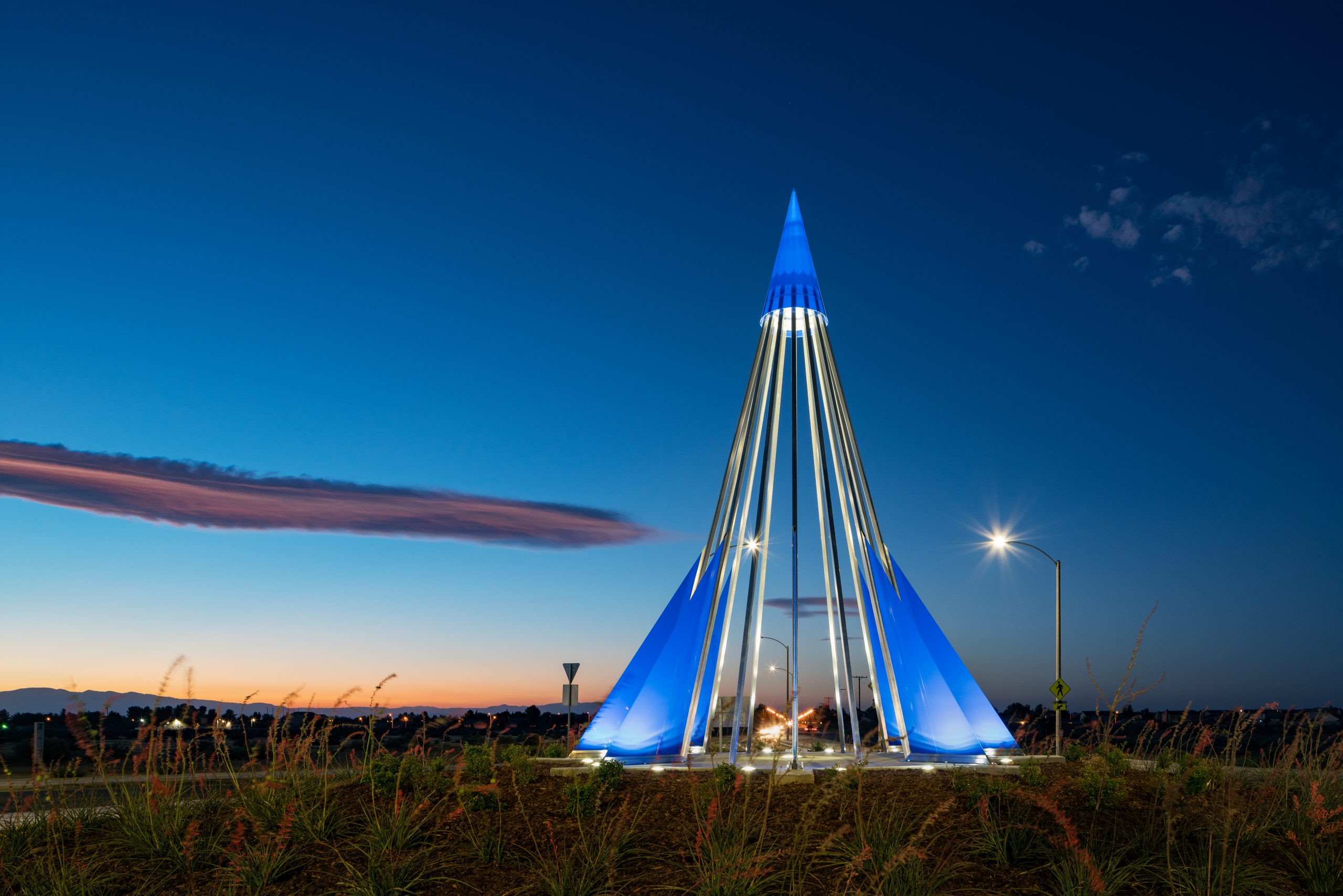 Where is your ideal escape destination? Ibiza and Formentera, two of the Balearic Islands located between mainland Spain and North Africa. I think the beaches are the most beautiful in the world with traditional Mediterranean cuisine. One can feel the history of the islands which have been invaded and controlled over the centuries by Phoenicians, Carthaginians, Romans, Byzantines, Moors, Norwegians, British, Catalans and Spanish. It is also a perfect geographical location to star-gaze the same composition viewed by early mathematicians and astronomers including Ptolemy and Galileo to accurately measure the planets and constellations in the night sky.

What’s the worst survival job you’ve ever had? Waitressing in Tel Aviv. I was terrible. Constantly bringing the wrong drinks to customers and serving hummus with my fingers in the dip. 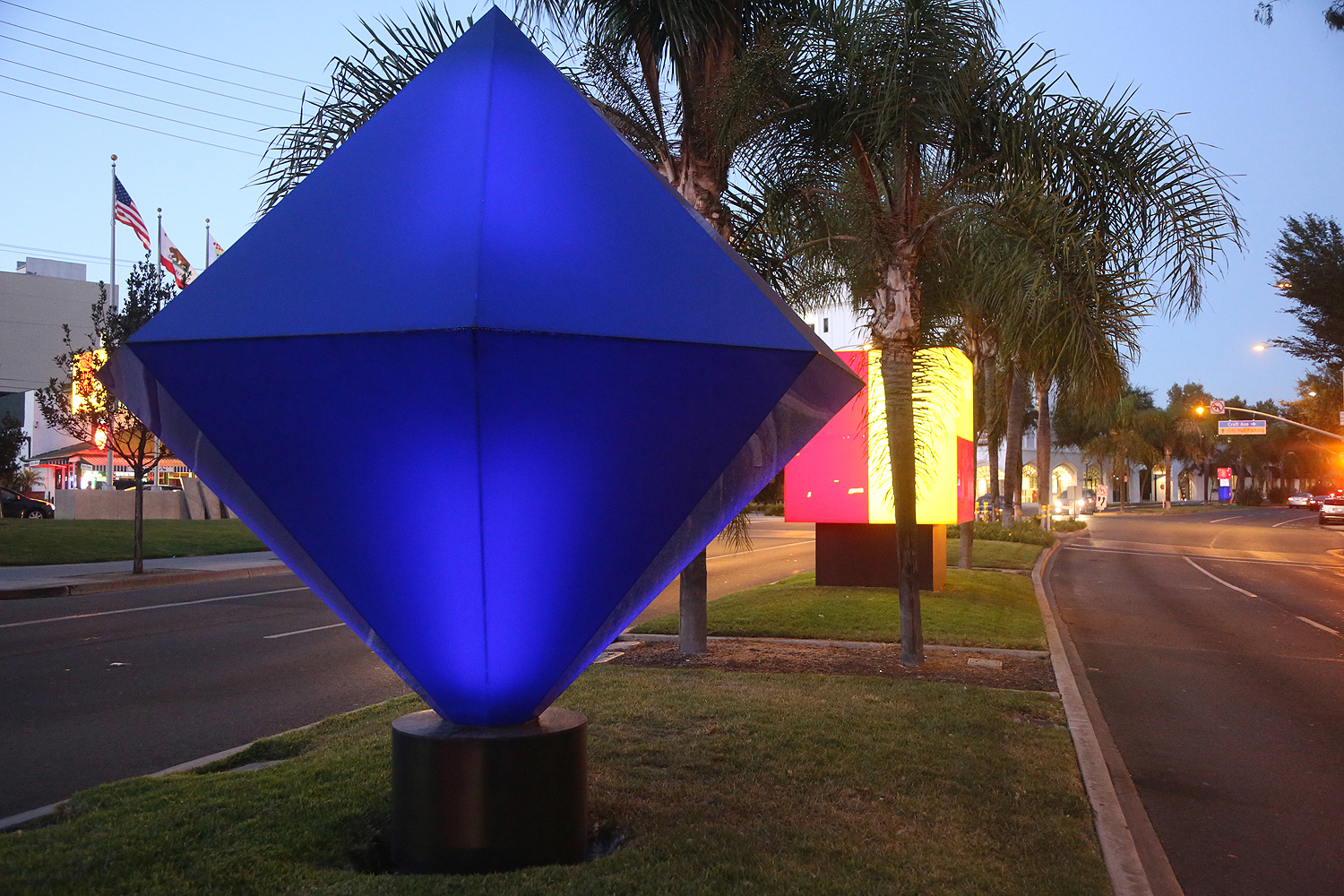 What TV series from your youth best describes your approach to life? Pipi Longstocking, her character embodies the qualities of adventure, independence, strength, courage and kindness that I adored as a child and do my best to keep alive as an adult.

What is your most treasured memory? After completing my second Vipassana 10-day silent meditation retreat in India, I spent three days alone deep in the Himalayan mountains, just outside of Rishikesh and sleeping in a structure next to a stream made of a simple wooden plank floor and roof supported by posts without walls. In the mornings wild peacocks would awaken in the trees next to me. I can still hear them stir as they stretched their wings during the sunrise. 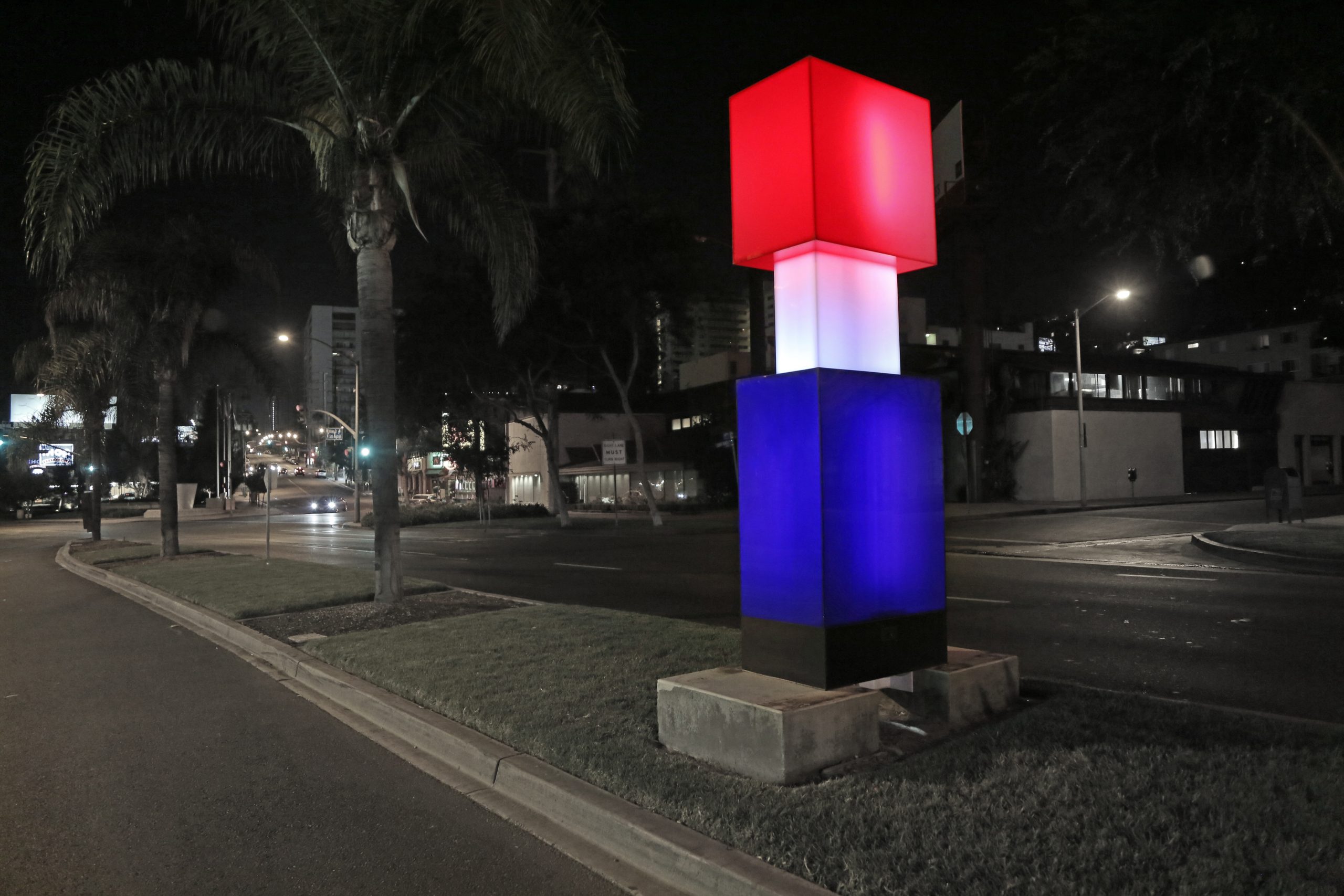 What makes you smile? Kindness.

What makes you cry? Unnecessary lack of kindness.

What is your go-to drink when you toast to a sale? Always a French Rosé bubbly.

After an all-nighter, what’s your breakfast of champions? Black tea and toast. Simple and effective. 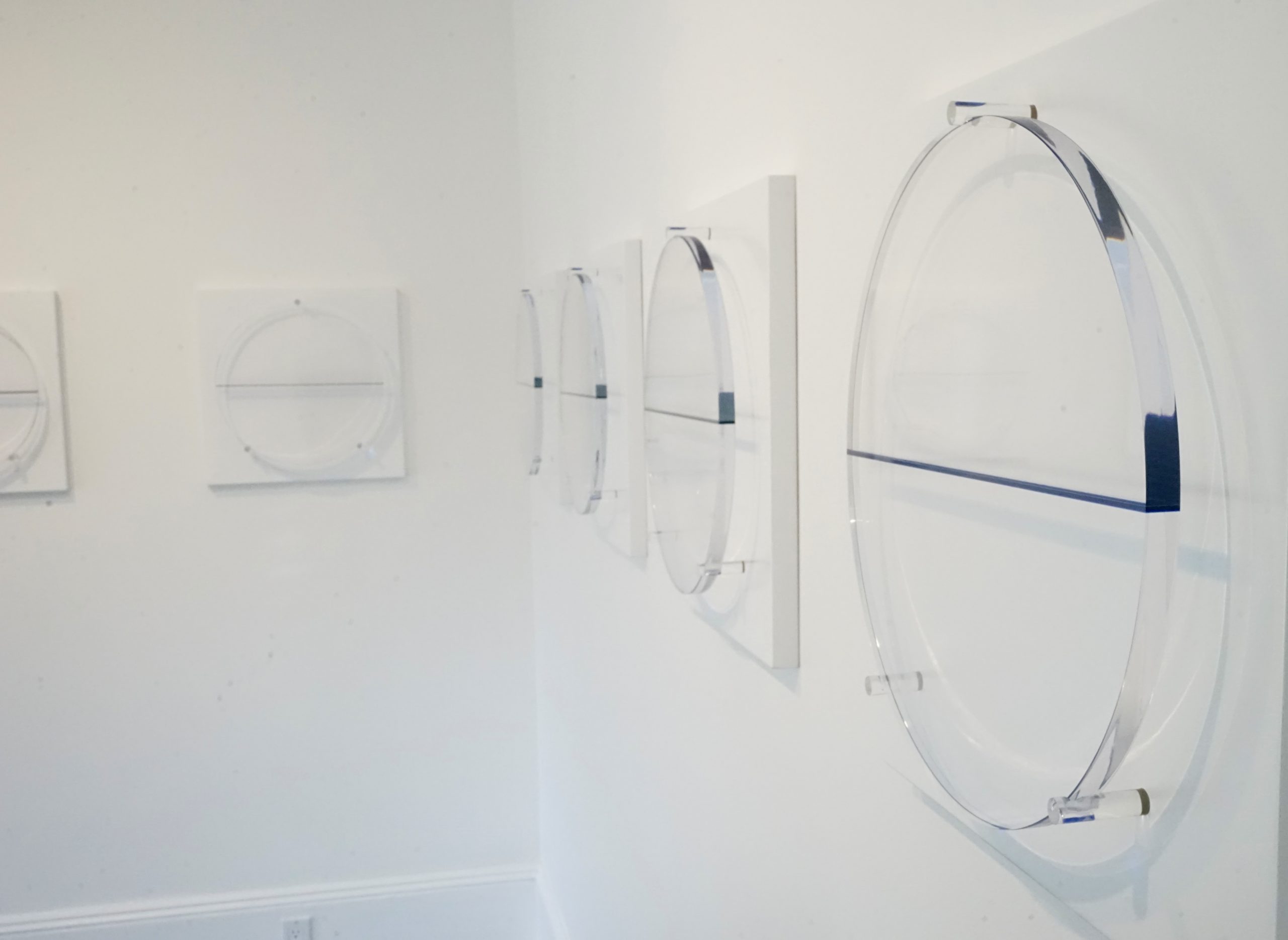 Who inspires you? I’m fascinated with James Turrell’s background in perceptual psychology with his Quaker upbringing. On a tour of Roden Crater in 2018, I was blown away at the thoughtful and precise construction of the monumental Camera Obscura built inside the crater. It was otherworldly, walking through the Sun | Moon Chamber towards the Alpha (East) Tunnel, the attention to detail and perfection was breathtaking. I will never forget the sensation of being part of the space. Turrell attempted the impossible and greatly succeeded.

What’s your best quality? I say, “yes” to something before I know exactly what I’m getting myself into and then when I realize what it is I actually said yes to, I then have to figure out quickly how to do it.

What’s your biggest flaw? Doubting myself or overthinking things.

If you could change one thing about yourself, what would it be? Trust my instincts and not care what people do or say without the guilt or, the same as #10!

What is your current state of mind? Embrace what comes, discard the futile and embody the essential. 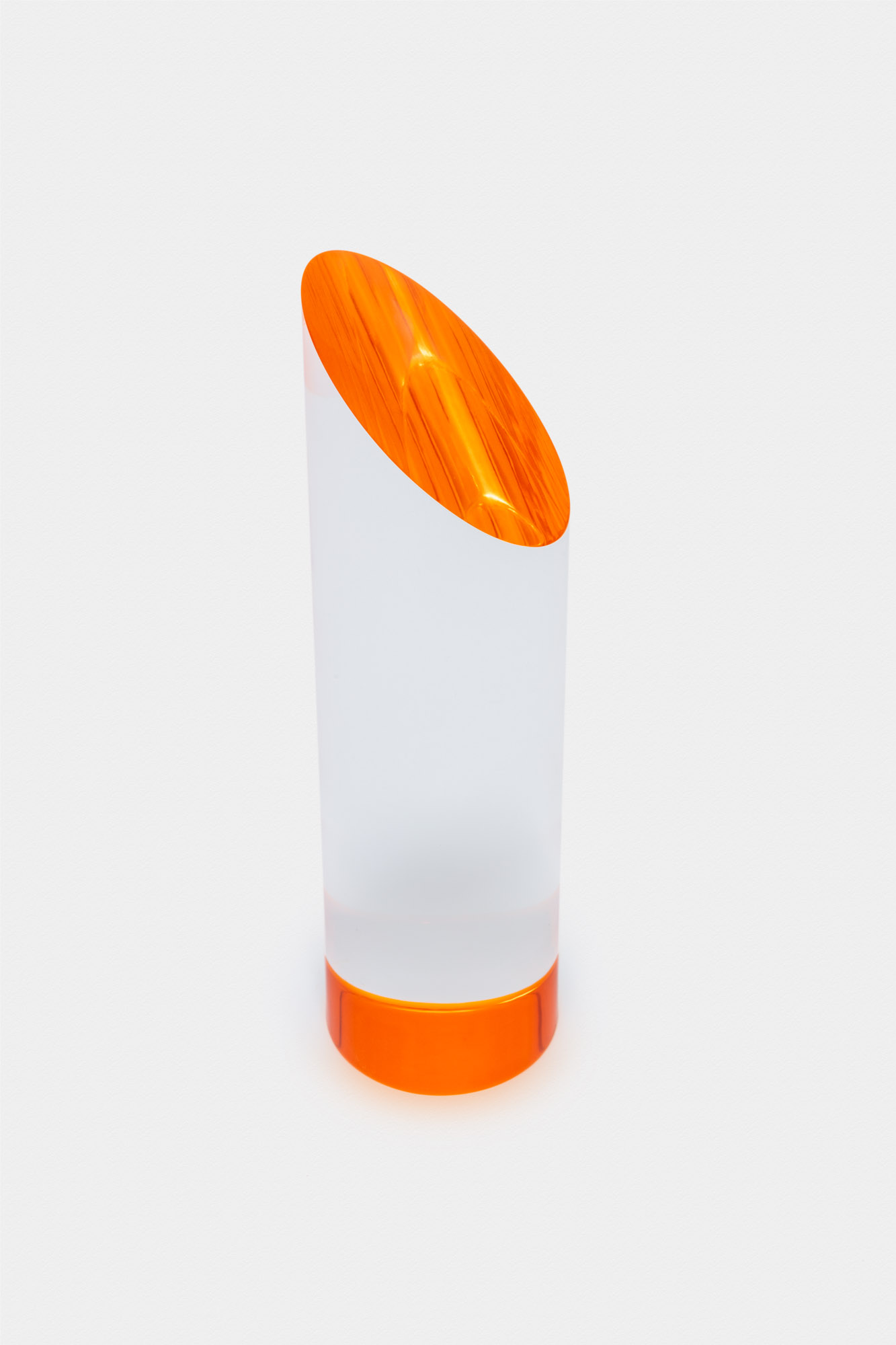 What do you consider your greatest achievement? My public art projects, Illumetric and Astral Challenger. After appreciating what it takes to successfully complete a public art project at that scale I understand why so few women artists do public works. Once the project is approved the work is mostly contractual working with my studio’s and host city’s team of engineers and fabricators. It can be intimidating for a lot of women since the departments are mostly run by men. 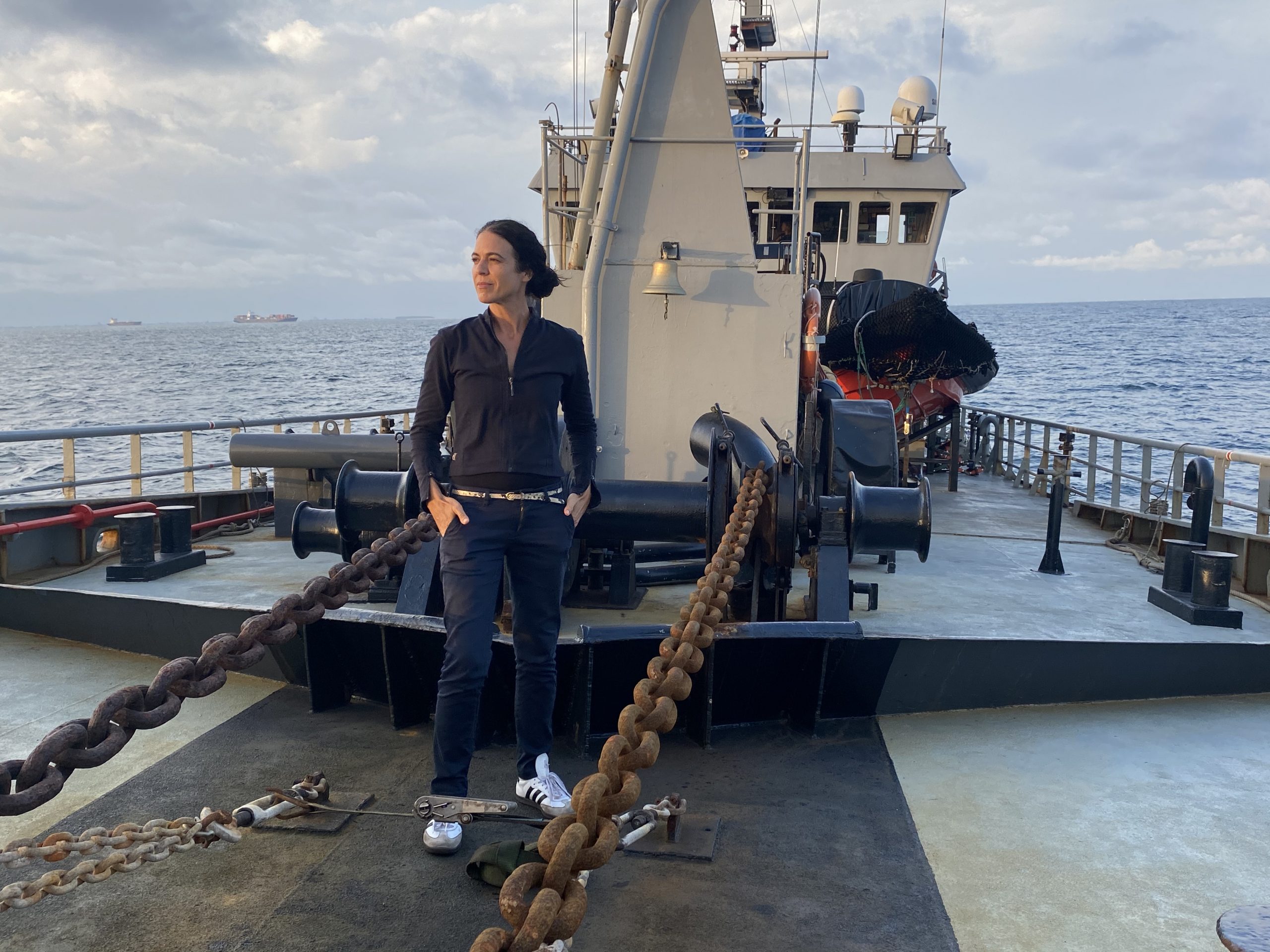 Shana Mabari aboard the Sea Shepherd Global vessel Bob Barker during her artist residency in the Gulf of Guinea off the west coast of Africa. 2020 (Photo credit Tara Lambourne)

If you were to die and come back as a person or thing, what would it be? I would like to come back as an opera singer, because in this lifetime I am acoustically challenged. My senses are overwhelmingly visual.  And the costumes are fantastic!

Victoria Looseleaf is an award-winning arts journalist who has been a regular contributor to the Los Angeles Times, the New York Times, KCET Artbound and other outlets. In addition, she covers arts festivals around the world, filing datelines from cultural hot spots that include Berlin, Venice and Abu Dhabi. Her feminist novella in verse, Isn’t It Rich? is being adapted for the stage and her children’s book Russ & Iggy’s Art Alphabet has recently been published.