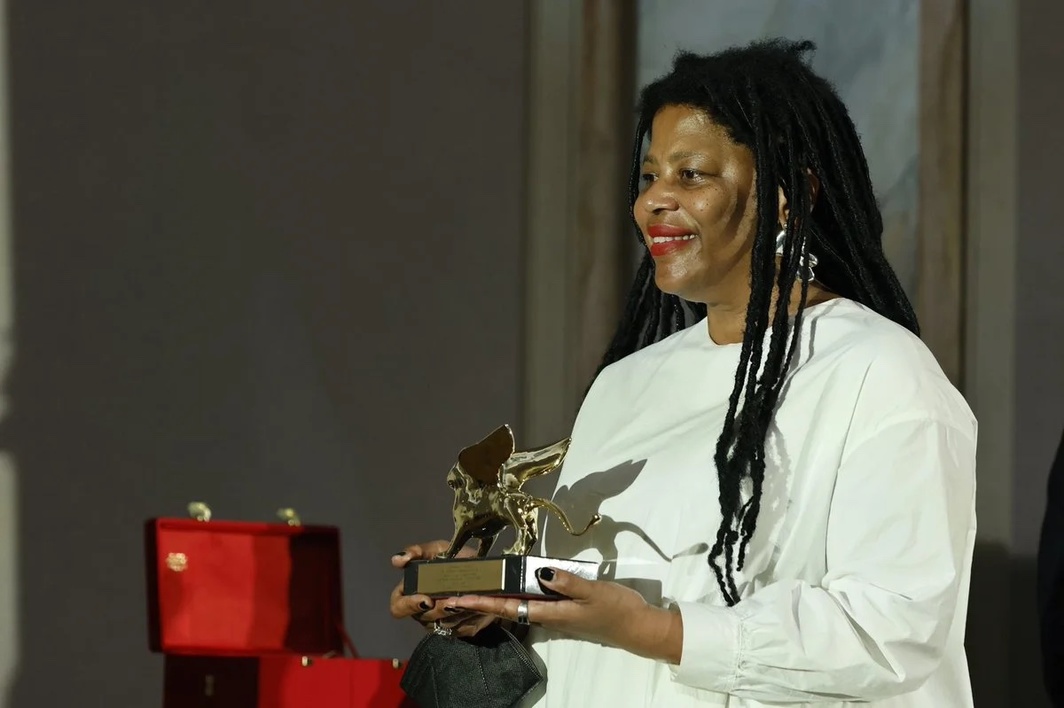 American sculptor Simone Leigh and British artist Sonia Boyce today were named the recipients of the Golden Lion at the Fifty-Ninth Venice Biennale, with Leigh taking the award for Best Participant, and Boyce accepting the distinction for Best National Participation. Their wins are historic, marking the first time a Black woman has received the prize since the Biennale’s founding 127 years ago. Additionally, each is the first Black woman to represent her country at the biannual event, whose iteration this year, “The Milk of Dreams,” was curated by Cecilia Alemani and is the first to prominently feature women and trans artists.

Leigh, whose exhibition “Sovereignty” is occupying the US Pavilion, won for her imposing Brick House, described by the prize jury as “rigorously researched, virtuosically realized, and powerfully persuasive.” The sixteen-foot-high bronze sculpture, originally commissioned for the High Line in New York, utilizes the designs of Batammaliba architecture and Mousgoum dwellings and references the 1940 building in the shape of a smiling, wide-skirted Black woman that houses the Natchez, Mississippi, restaurant Mammy’s Cupboard.

Boyce won her Golden Lion for her exhibition at the British Pavilion, “Feeling Her Way,” incorporating sound, video, sculpture, and archival materials to investigate the work of five Black British women musicians working across a broad range of genres whose work has to date been largely underrecognized. The prize jury characterized the show as “propos[ing] another reading of histories through the sonic.”

Lebanese artist Ali Cherri won the Silver Lion, awarded each year to a “promising young participant,” for his 2022 video installation Of Men and Gods and Mud, which places Sudan’s Merowe Dam within an art-historical context. The effort was praised by the jury for “opening up from other narratives that depart from the logic of progress and reason.”

The Golden Lions for Lifetime Achievement, awarded earlier this year, went to Cecilia Vicuña and Katharina Fritsch, both of whom are exhibiting in this year’s biennale.