Jemima Wyman: ‘A Haze Descends’
Speaking to the Moment 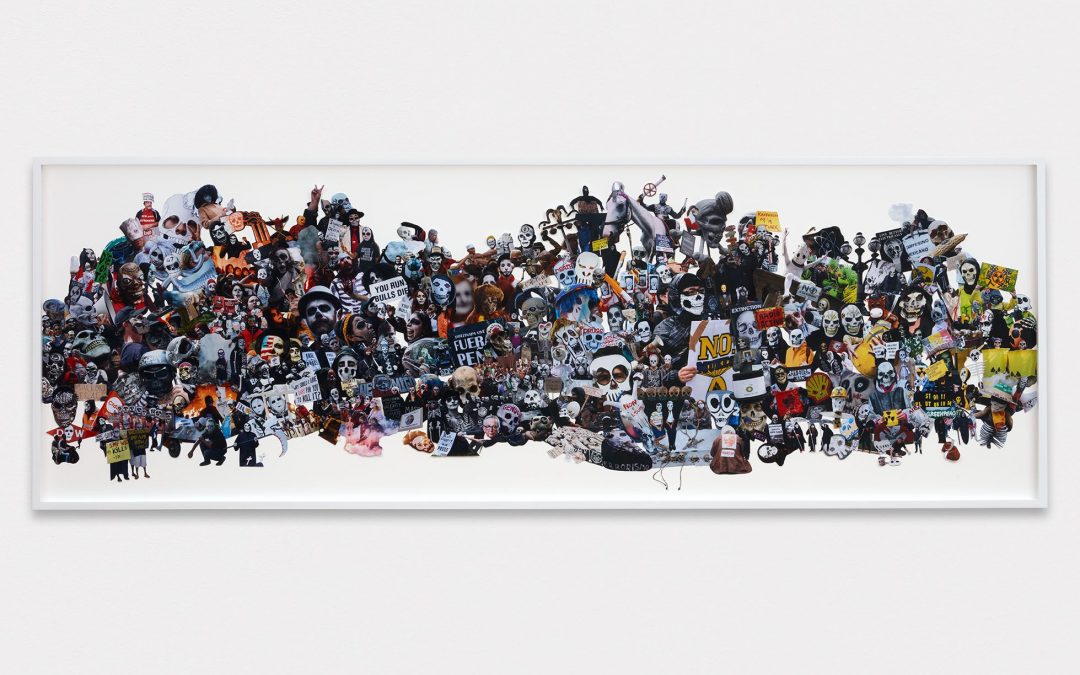 In the age of digital montaging, assembling collages by hand is something of an anomaly. Elliott Hundley is an artist known for pinning thousands of cutouts to the surface of his paintings. More typically, the collaborative team Simmons and Burke create digital collages drawing material from the internet and organizing the images by theme and/or color to make eye popping large-scale collages that comment on popular culture. To create the pieces in A Haze Descends, Jemima Wyman culls through her personal archive of saved imagery, as well as searches for images online. 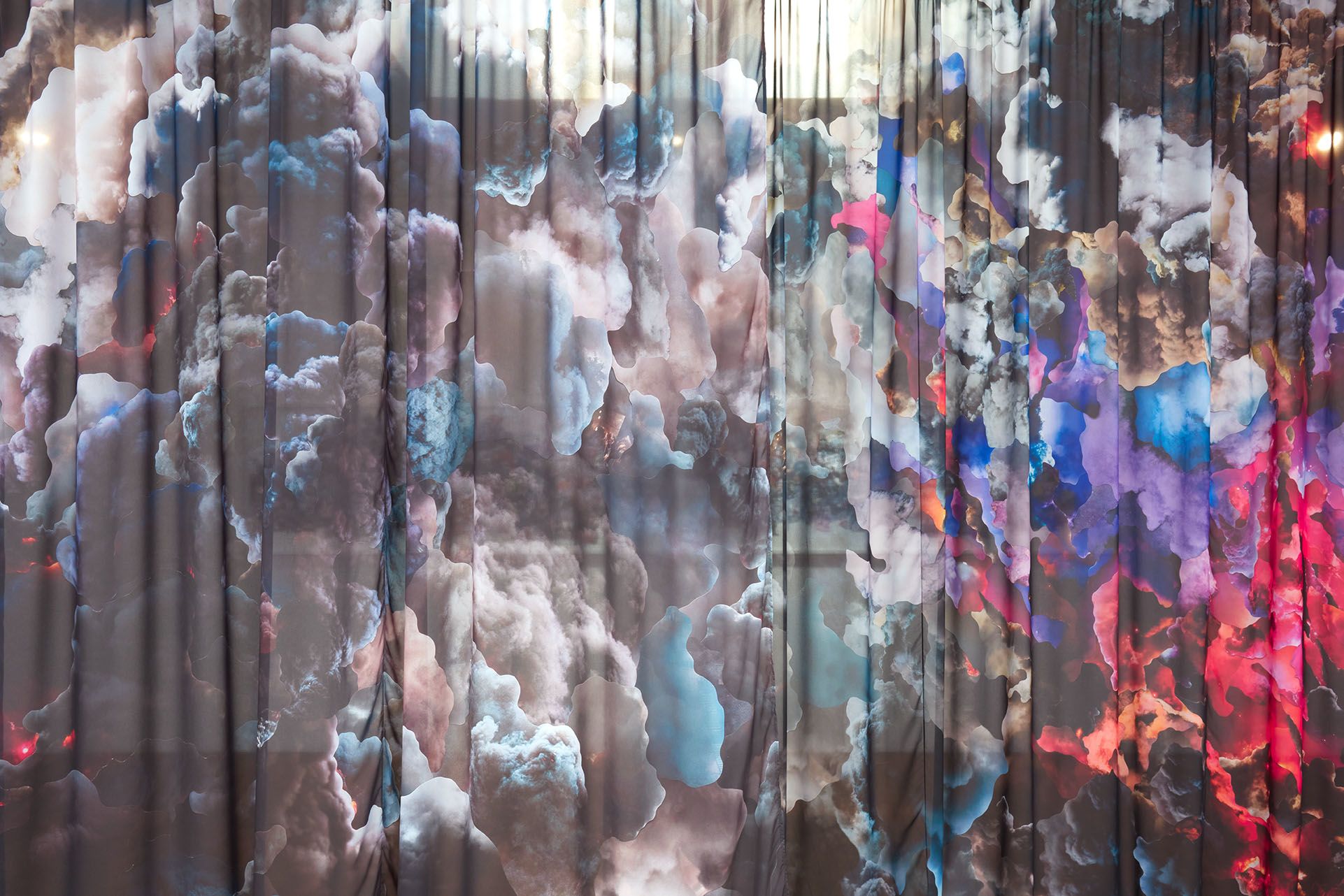 Wyman has been collecting and saving images since 2008, resulting in an archive she refers to as MAS (referencing en masse, in a group together). Once she has compiled these assets, she resizes the photographs and makes new digital prints, then cuts away the backgrounds so all that is left are the distinct shapes she will tape together to form her collages. Most of the imagery comes from documentation of fires or protests and Wyman combines and frames hundreds of these selected fragments into arrays filled with skulls, plumes of smoke, or demonstrators raising fists and holding signs. 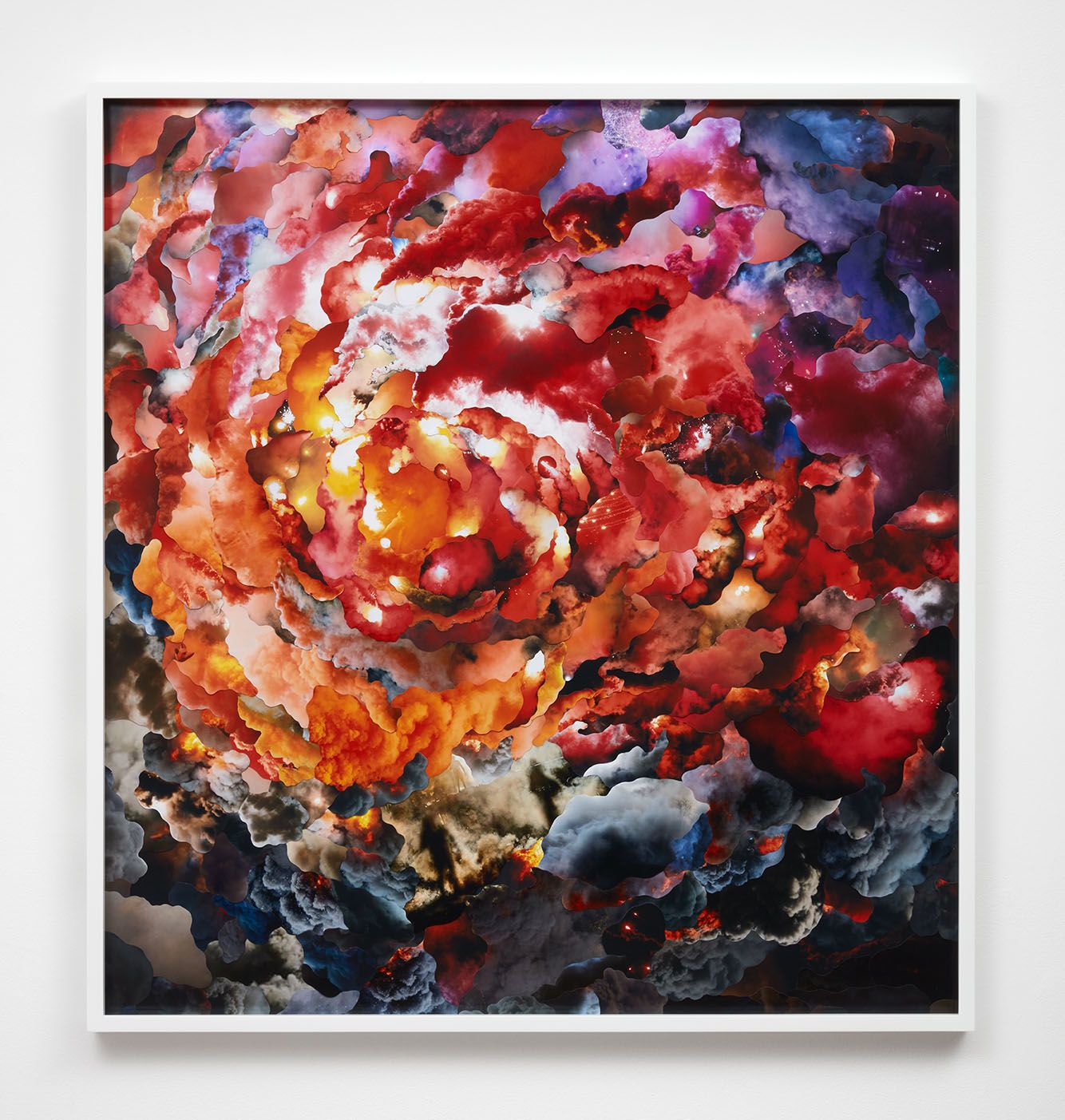 In addition to the framed works, Wyman also suspends translucent chiffon curtains that hang from ceiling to floor and are covered with enlarged versions of her swirling smoke collages to form a quasi-labyrinth within the gallery space. Wyman immerses viewers in an atmospheric cloud by suspending these curtains — Haze 2 and Haze 5/6 — across the space that function like soft barriers filled with montages of smoke. Upon entry, one can only see the works on the walls through this haze, further calling attention to ongoing atmospheric disturbances. 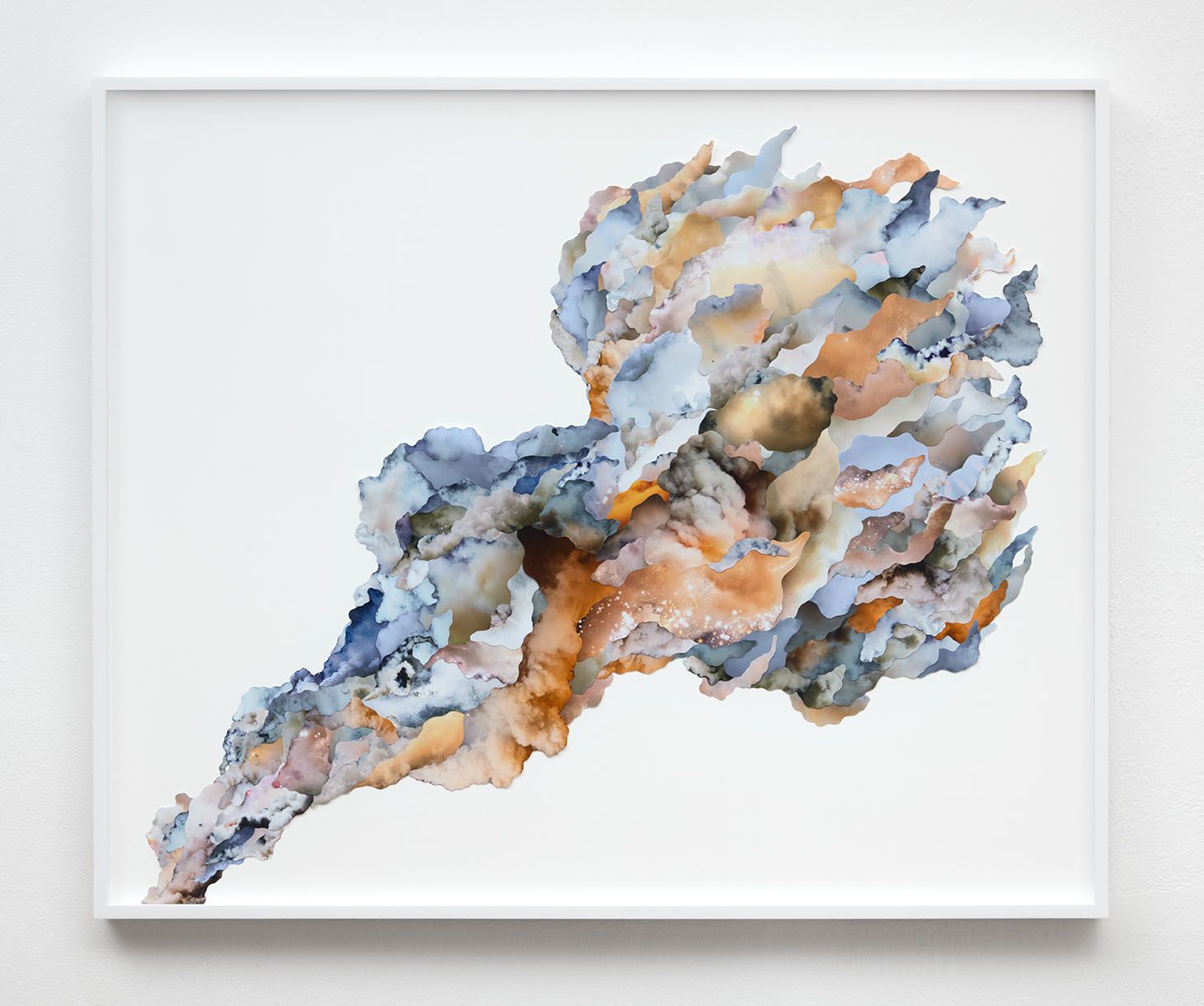 In previous bodies of work, Wyman used images from her archive to create intricate patterns of camouflage. While A Haze Descends draws from similar source material, these pieces focus on the symbolic attire worn by protesters and the apocalyptical presence of smoke. Plume 18 (all works 2022) is a collage in the shape of an expanding cloud created by assembling numerous cut shapes of gray and orange toned haze taken from various pictures of fires and explosions. 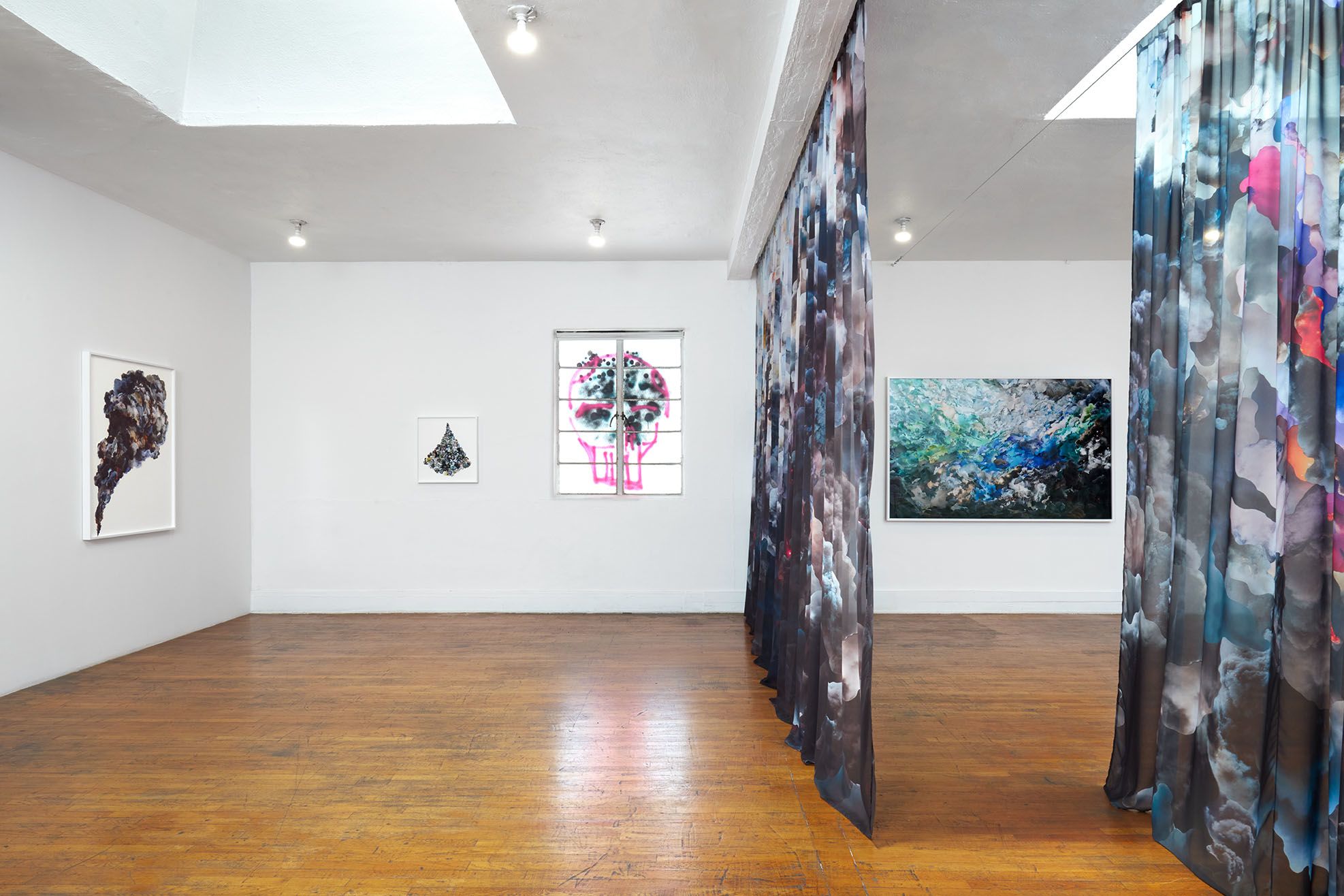 Each individual shape follows the contour of the undulating edges of a plume and when combined they become an amalgamation representing the myriad fires that have broken out world-wide in the recent past. Undead Aggregate Icon (1) collages disembodied human heads, as well as photographs of skulls (ranging from cartoons to masks worn by protesters) into a shape that resembles a cascading landslide. While a single image of a skull can be a haunting and loaded symbol, this accumulation becomes even more disturbing and powerful. Transboundary Dissent is a large-scale collage that also features pictures of skulls, yet here, Wyman is more interested in the gestures of solidarity and defiance seen in protests and uprisings across the globe. 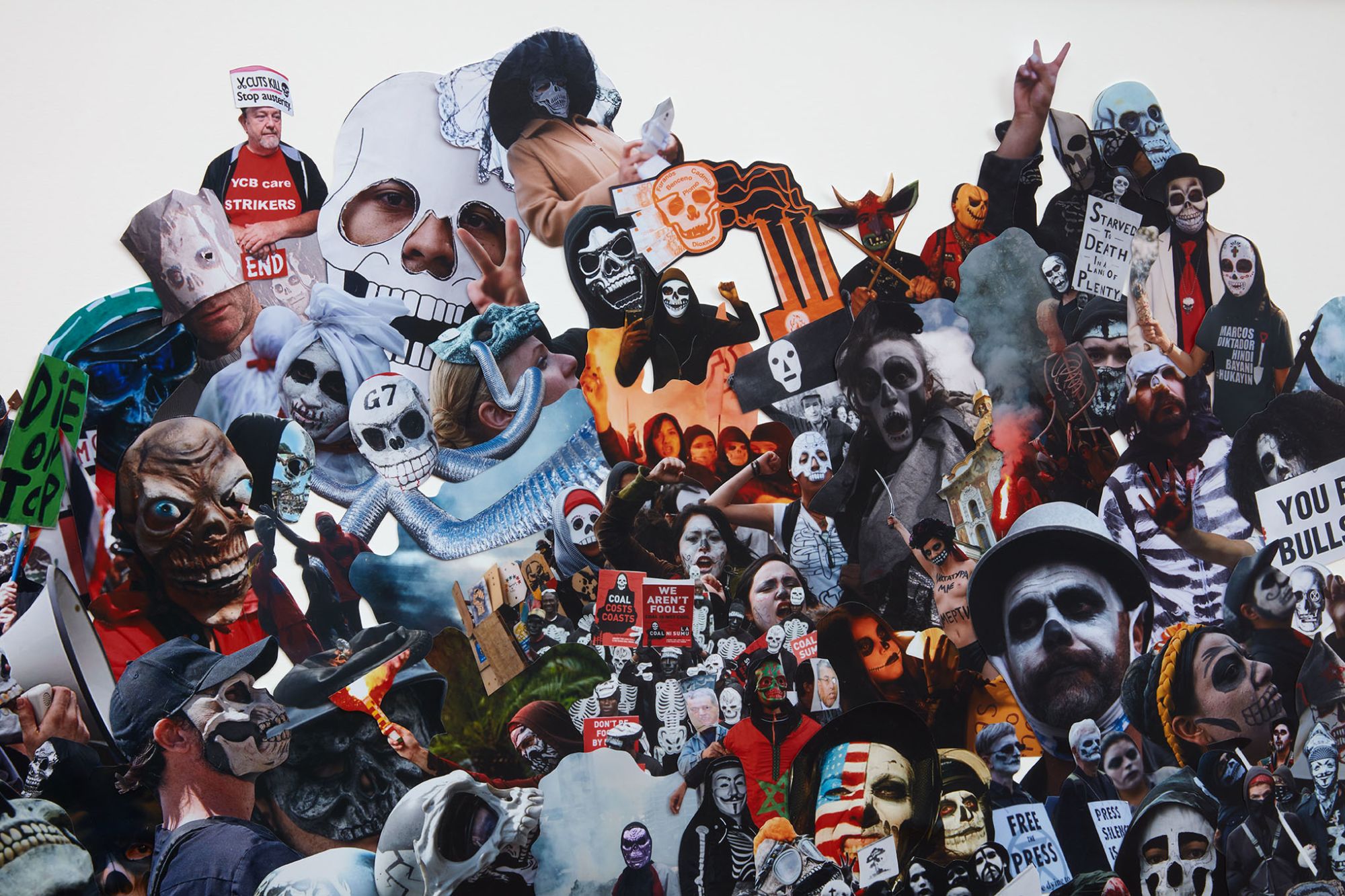 The installation as a whole, as well as the individual works, are colorful and seductive. Though familiar, they are also otherworldly: both uncanny and sublime. It is hard to take one’s eye away from a collage like Haze 8 (Pink, Orange), a maze of spiraling pink and orange flames that emanate from a central vortex. The image recalls the fires, eruptions and clouds that often appeared in romanticized paintings of the sublime from the nineteenth-century. Wyman’s works resonate now because we’ve recently been bombarded with images of fires and demonstration that accompany news stories about climate change, conflict and war. By collecting and then re-contextualizing these photographs, Wyman calls attention to the universal language of protest and the un-nerving presence of smoke-filled air. Wyman’s collages speak to the moment and remind us that though beauty can be found in images of protest, smoke and fire, real dangers abound.