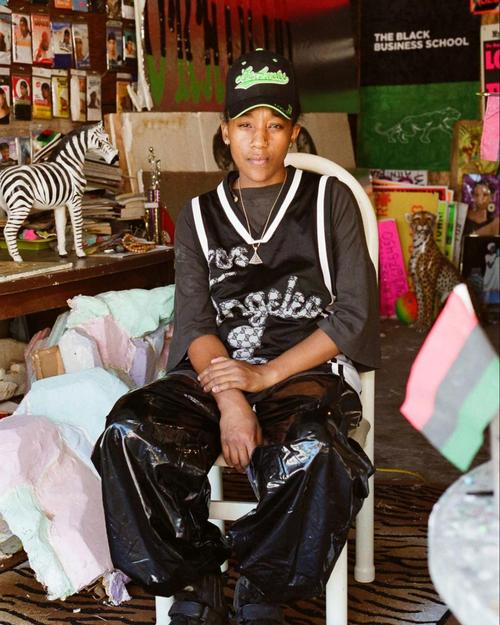 The Metropolitan Museum of Art announced this week that American artist Lauren Halsey has been commissioned to create a site-specific installation for The Met’s Iris and B. Gerald Cantor Roof Garden. Halsey will create a full-scale architectural structure imbued with the collective energy and imagination of the South Central Los Angeles Community where she was born and continues to work. Titled the eastside of south central los angeles hieroglyph prototype architecture (I), the installation is designed to be inhabited by The Met’s visitors, who will be able to explore its connections to sources as varied as ancient Egyptian symbolism, 1960s utopian architecture, and contemporary visual expressions like tagging that reflect the ways in which people aspire to make public places their own. The Roof Garden Commission: Lauren Halsey will be on view from May 17 through October 23, 2022.

Max Hollein, Marina Kellen French Director of The Met, said, “We are thrilled that Lauren Halsey will bring her compelling vision to the Cantor Roof Garden this spring. With this installation, Halsey channels The Met’s unparalleled Egyptian Art collections through the lens of Afrofuturism, while also creating a powerful form of documentation of her neighborhood in South Central Los Angeles. Engaging with the past, while also exploring a space of speculative imagination, Halsey offers us a powerful statement about civic space, social activism, and a reconsideration of the possibilities for architecture and community engagement.”

Sheena Wagstaff, Leonard A. Lauder Chair of Modern and Contemporary Art, commented: “Halsey’s activist vision offers a portal into the near future. She has created a monument to living architecture, carved exquisitely with a pictographic vernacular that meshes ancient hieroglyphs with the visual motifs of her home and community. It proposes an urgent paradigm, an ancient-modern vessel that carries a radical message, a vital corrective to the inequality of lived experience today, both nationally and globally. It proposes the vital tenets of a new civilization characterized by truth and justice. Like the ancient Egyptians, she anticipates a meaningful afterlife for her work, which will be displayed in South Central Los Angeles after its debut at The Met.”

Halsey said, “My installation for The Met’s roof garden reflects my interest in conflating narratives from contemporary South Central Los Angeles with those evoked in ancient pharaonic architecture. My hope is that viewers in New York feel the connections intuitively.”

By adapting elements of ancient Egyptian architecture and sculpture for a contemporary context, Halsey’s commission redeploys the hieroglyph as a tool for documenting and commemorating how community vitality and genre-defying creativity shape the built environments of South Central Los Angeles.

The exhibition will be accompanied by a publication that will include an interview between Halsey and poet, performer, and librettist Douglas Kearney and an essay by Thomas. The publication is priced at $9.95 and will be available for purchase at The Met Store in June 2022.

Lauren Halsey (b. 1987, Los Angeles) rethinks the possibilities for art, architecture, and community engagement. She produces both stand-alone artworks and site-specific projects, particularly in the South Central neighborhood of Los Angeles, where her family has lived for several generations. Combining found, fabricated, and handmade objects, Halsey’s work maintains a sense of civic urgency and free-flowing imagination, reflecting the lives of the people and places around her and addressing the crucial issues confronting people of color, queer populations, and the working class. Critiques of gentrification and disenfranchisement are accompanied by real-world proposals as well as a celebration of on-the-ground aesthetics. Inspired by Afrofuturism and funk, as well as the signs and symbols that populate her local environments, Halsey creates a visionary form of culture that is at once radical and collaborative.