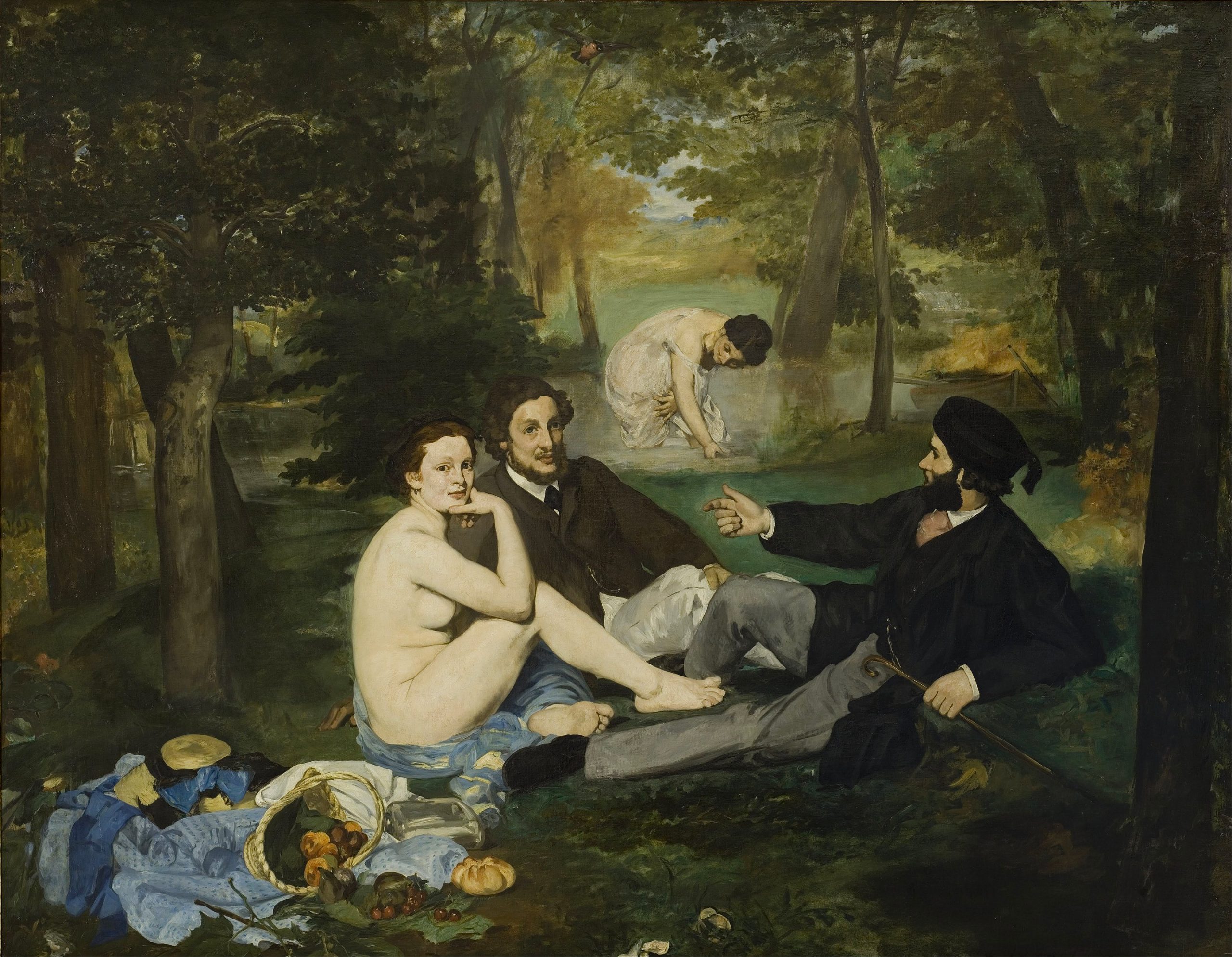 Édouard Manet’s Le Déjeuner sur l’herbe (1863) is regularly cited as the first modern painting. It is often featured as the first slide in Art History lectures about the history of modernism.

More than thirty painters have responded to Manet’s Le Déjeuner sur l’herbe in Luncheon on the Grass at Jeffrey Deitch, Los Angeles on view through April 23, 2022.

Artists began creating works in response to Édouard Manet’s Le Déjeuner sur l’herbe within two years of its exhibition in the 1863 Salon des Refusés. From Claude Monet to Pablo Picasso, and more recently Robert Colescott, artists have turned to Manet’s painting as a source of radical and contradictory possibilities for painting.

Le Déjeuner sur l’herbe astounded contemporary observers with its modernist innovations. Even today, it still has the power to shock, especially when one experiences it in person at the Musée d’Orsay. The jolt of seeing a naked women and two formally clothed men assembled for a picnic remains disconcerting. The most jarring aspect of the composition is the intense gaze of the female nude in the foreground, modeled by Victorine Meurent, staring back at the viewer. She is rendered as a real person, not the allegorical nude of the typical academic painting.

The formal structure of the composition is also arresting, almost abstract. The positioning of the figures forms a dynamic geometry. The perspective is confounding, with the bather in the background too large for the illusion of receding space.

Contemporary viewers were upset by the deliberate lack of finish. An art critic reviewing the Salon des Refusés of 1863 complained that the brushwork was so lacking in finesse that it could have been done with a floor mop. The perception of Manet’s technique was very different when, one hundred years later, while immersed in the creation of his two hundred paintings, drawings and sculptures inspired by Le Déjeuner sur l’herbe, Pablo Picasso observed that “one can see the
intelligence in Manet’s brushstrokes.”

The visitors to the 1863 Salon des Refusés were also disconcerted by the absence of sculptural shading and the expected illusion of three-dimensionality. Manet used contrasts of color rather than gradations of tone to give the figures their structure. At first glance, one might interpret the work as a plein air landscape, with the figures posing outdoors. As one studies the painting, however, it becomes evident that Manet is playing with illusion versus reality. He makes it clear that the painting has been created in a studio with the landscape functioning almost as a backdrop.

Le Le Déjeuner sur l’herbe is aggressively modern in its portrayal of real people, family members and an identifiable nude model rather than idealized figures. Even today, the subject matter is transgressive. The work engages with contemporary culture, depicting the leisure activities of the new generation of Parisians taking the train to picnic in the countryside outside the city. It also directly engages the audience with Victorine Meurent’s figure meeting the gaze of the viewer. By using his brother and brother-in-law as the male models, Manet also inserts an aspect of himself into the painting.

Manet sets up a modernist juxtaposition of opposites: clothed and unclothed, outdoors and indoors, reality and artifice. His visible brushwork, as opposed to the high finish of academic painting, reveals the painting process. Le Déjeuner sur l’herbe is fundamentally a painting about painting—one of the main reasons it is seen as key to the invention of modernism. Manet was determined to show Le Déjeuner sur l’herbe in the Salon of 1863, but to his great disappointment, it was rejected. A large part of the notoriety of the painting stems from its exceedingly negative reception. The hostility to the work eventually became a badge of honor to the modernist cause and an inspiration to succeeding generations of artists whose work was not appreciated at first because it was ahead of its time.

Ironically, Le Déjeuner sur l’herbe could also be described as the first postmodern painting. Manet has appropriated and remixed art historical references with vernacular imagery. The subject is inspired by Titian’s Le Concert Champêtre (ca. 1509), which Manet would have known from the Louvre and the composition of the three figures in the foreground is taken from Marcantonio Raimondi’s etching of The Judgement of Paris after Raphael (ca. 1515), which would have been familiar to Manet’s artist friends. Le Déjeuner sur l’herbe combines every genre of painting including landscape, portraiture, and still life. It transforms history painting, the most prestigious genre, from academic allegory into a social history of contemporary Paris. The painting encompasses past and present and points to the future.

Le Déjeuner sur l’herbe’s fusion of historical, contemporary and personal imagery, and its references to traditional, vanguard and popular culture connect with current artistic practice. As Manet did with Le Déjeuner sur l’herbe, some of the most provocative contemporary painting collapses the historical and the contemporary onto the same plane. Artists are now combining the real, the unreal, the personal and the universal to create their own visions of artistic truth.

From today’s perspective, Le Déjeuner sur l’herbe is a problematic painting. It can be interpreted as blatantly sexist and exploitative in its subject. A contemporary viewer, however, might also see the two bathers as cool, liberated women, comfortable in their nudity. The figure modeled by Victorine Meurent is strong and confident, looking back at us without embarrassment.

The artists in Luncheon on the Grass are creating new works for the exhibition. Many of the newly created works will be surprising, taking Manet’s painting as a reference point and expanding on its themes. The show will also include existing works inspired by Manet’s painting such as the ones by Alain Jacquet (1964), Robert Colescott (1979) and Jeff Koons (2014-2015).