Ed Templeton: ‘The Spring Cycle’
Presenting the World with Matter-of-Factness Amid Irony 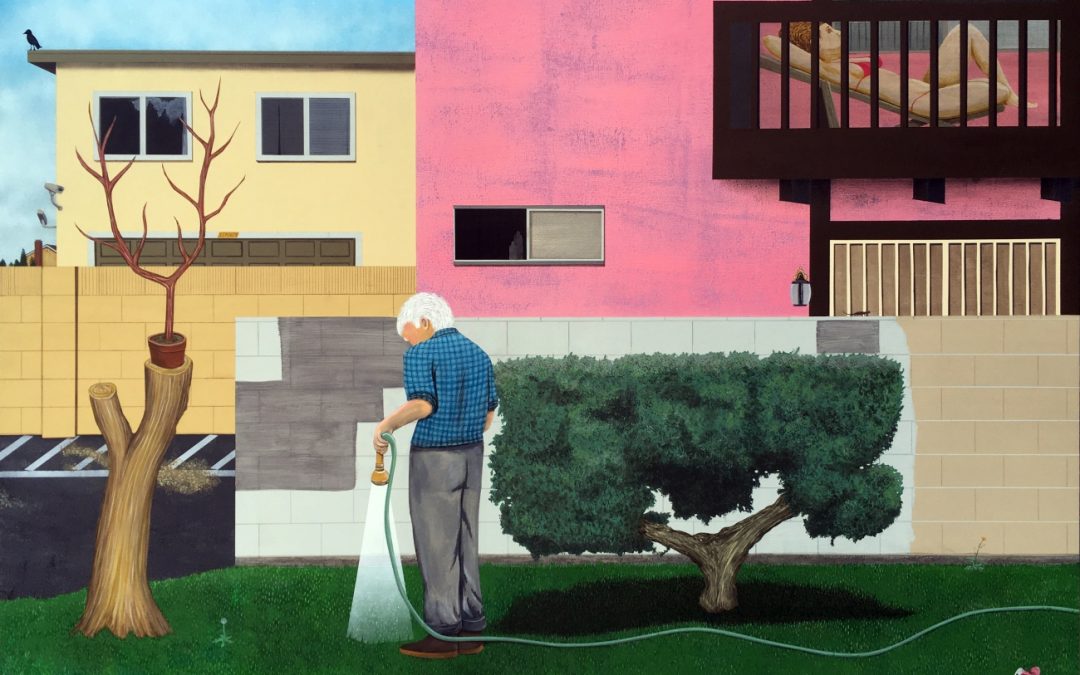 Ed Templeton‘s artworks reflect the people and places that surround him. He looks closely at the inhabitants and sprawl-scape of Orange County, CA making note of the many inherent contradictions. Working from photographs, as well as his memories, he combines idiosyncratic details to make paintings that are simultaneously ironic, humorous and cutting. While the photographs are fleeting snapshots that record an instant in time, the works on paper and paintings often combine disparate elements selected from the photographs. 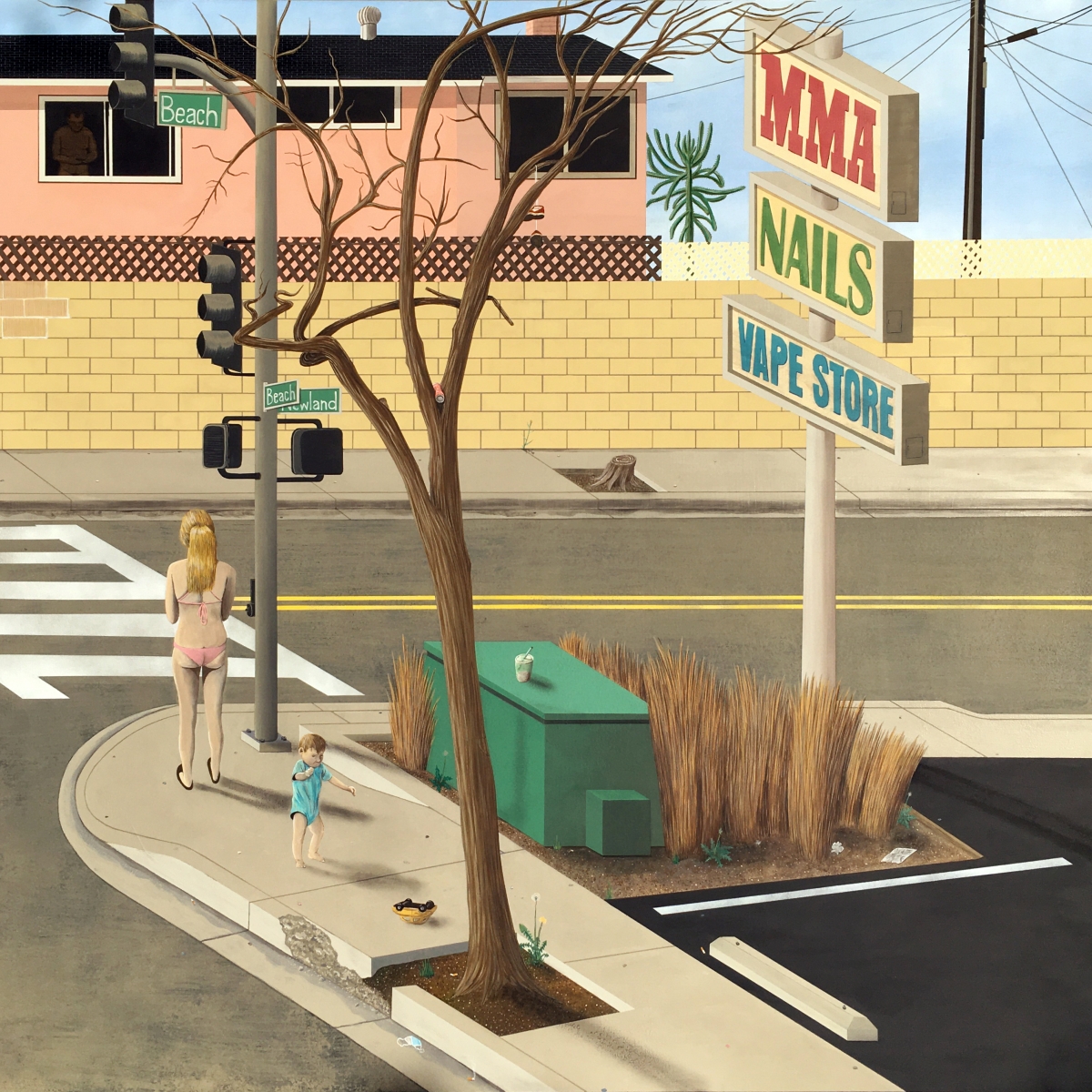 For example, in the 2013 black and white photograph Man watering lawn, Templeton depicts a man casually watering his lawn shot through and framed by a car window. In the painting Man Still Watering Lawn (2021), a gray-haired elderly man is in a similar position— his back to the viewer— is pictured with a hose spraying straight down onto a patch of green grass surrounded by low pink and yellow apartment buildings. Templeton has an illustrative and detailed painting style. He pays particular attention to the details. In Man Still Watering Lawn, he includes a woman sun bathing in a red bikini on a second-floor balcony, two bottles in silhouette seen through an open window, as well as a black bird perched at the corner of the building above security cameras focused on an unseen alley. 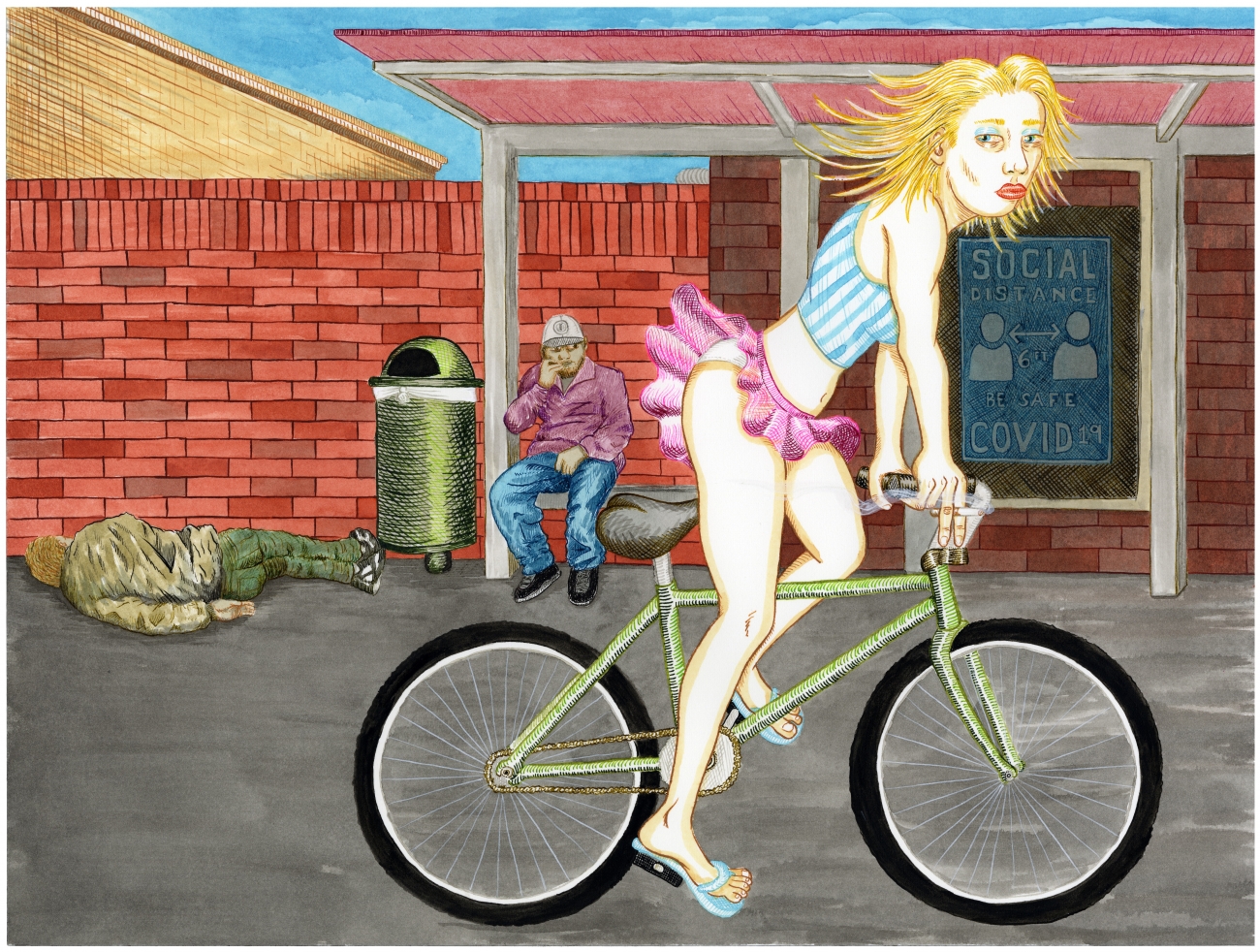 Newland Avenue depicts an intersection where a woman presumably texting on her cellphone and wearing a light pink bikini waits at the light to cross the street. She faces away from a toddler in a light blue jumpsuit who is awkwardly moving toward an upside-down toy car in the middle of the sidewalk. A sign for a nail and vape store parallels the street. An empty cup was left on a green utility box at the corner of the street, surrounded by tufts of long, brown dried grass and a single blooming flower. Upon closer examination, it becomes evident that the image represents our moment in time as one notices below the damaged sidewalk and a lone tree stump, a single blue mask lying in the gutter. 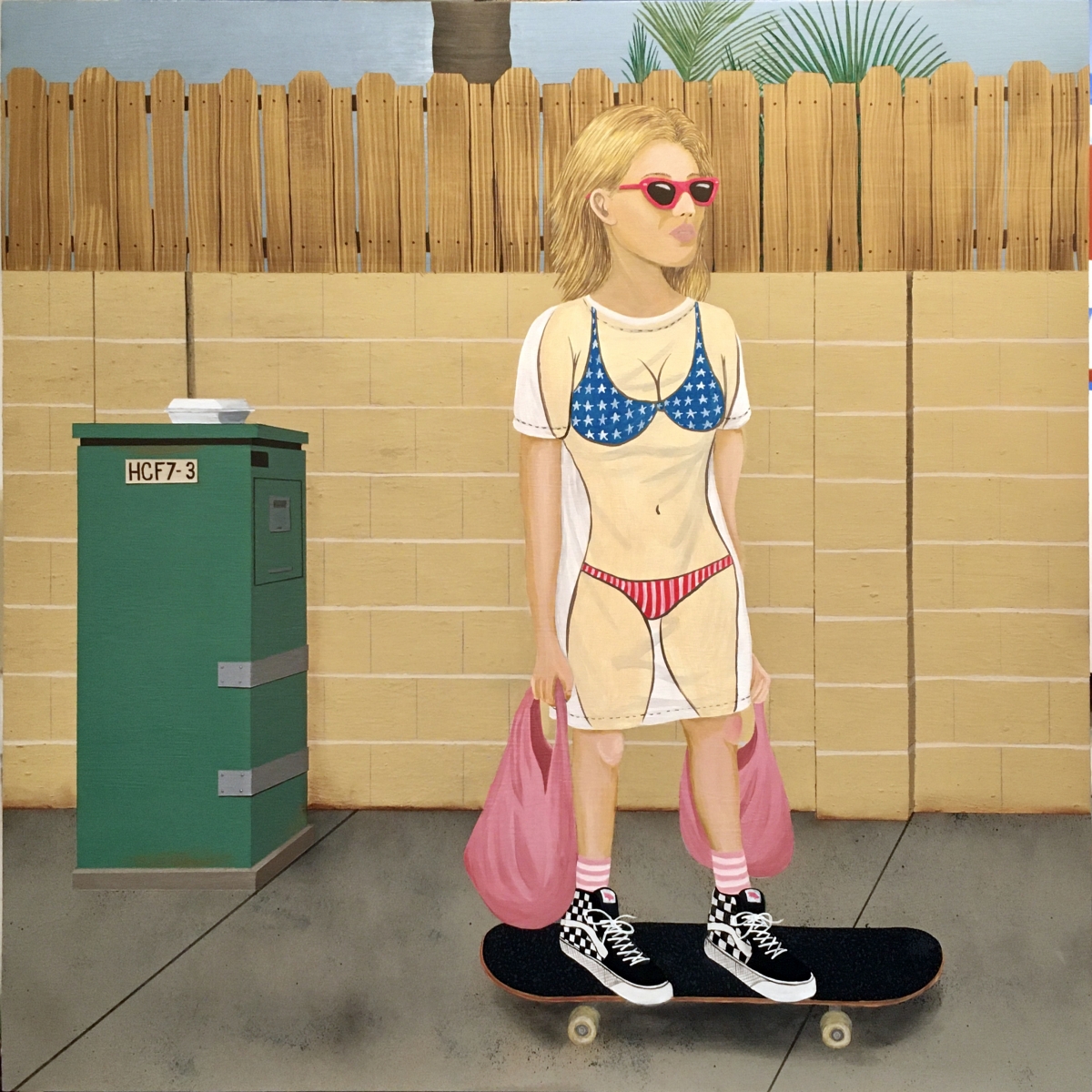 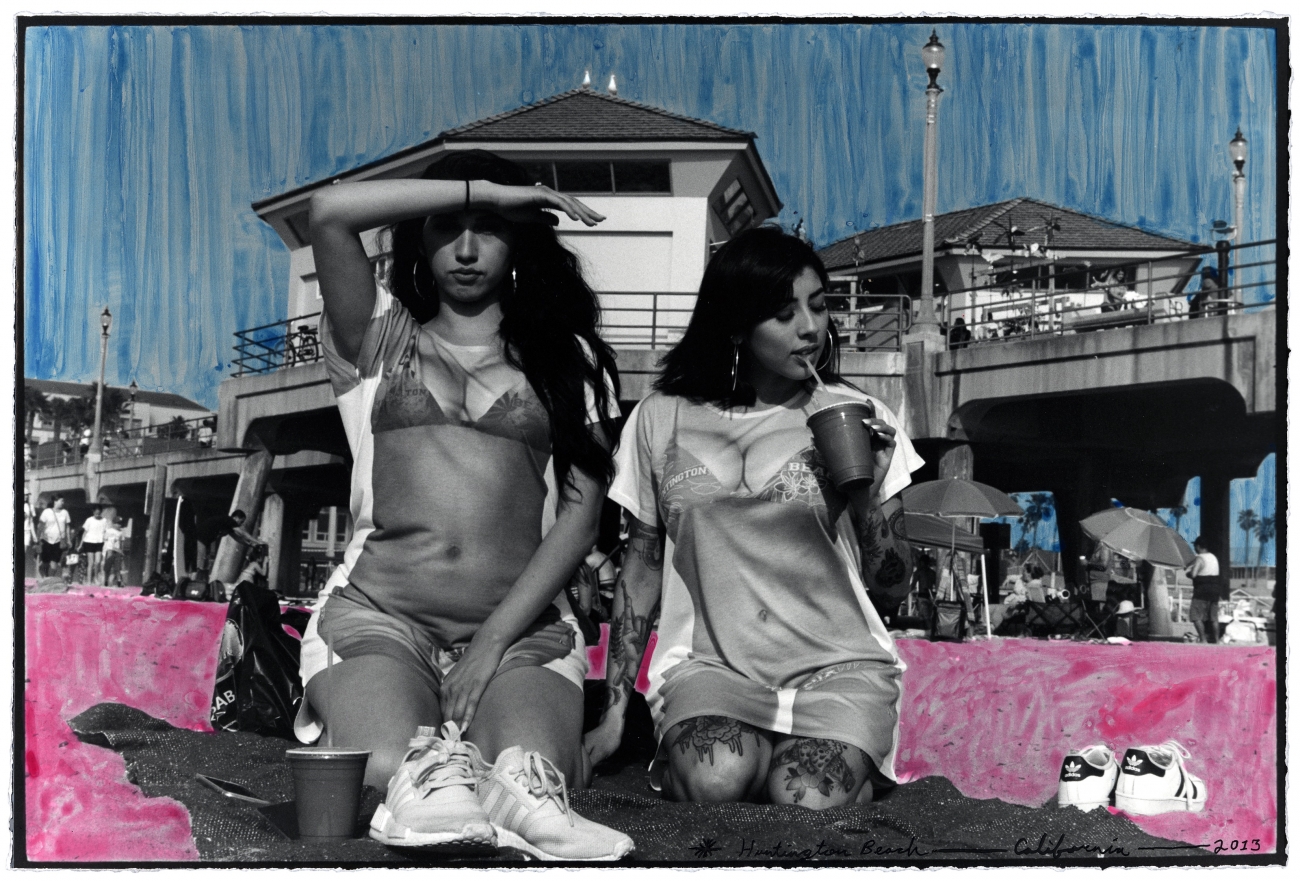 In this painting, a sunglasses-wearing blond-haired woman with black and white high tops carrying a pink plastic bag in either hand rolls along the sidewalk in front of a beige cinderblock wall separating a few trees from the street. She appears unphased and unhurried as she carries her purchases. Again, for Templeton a strange scenario is depicted as commonplace, rather than unusual. Pandemic Summer Suburbia (2021) captures the now. A blue-sandled, pink-purple tutu-wearing woman with large red lips, blue eye shadow and Medusa-like blond hair rides past a bus shelter on a green, one-speed bike as a homeless man sleeps on the sidewalk by a trash can. A second man sits on the bench near a large sign that emphasizes social distance and the need to keep six-feet away. 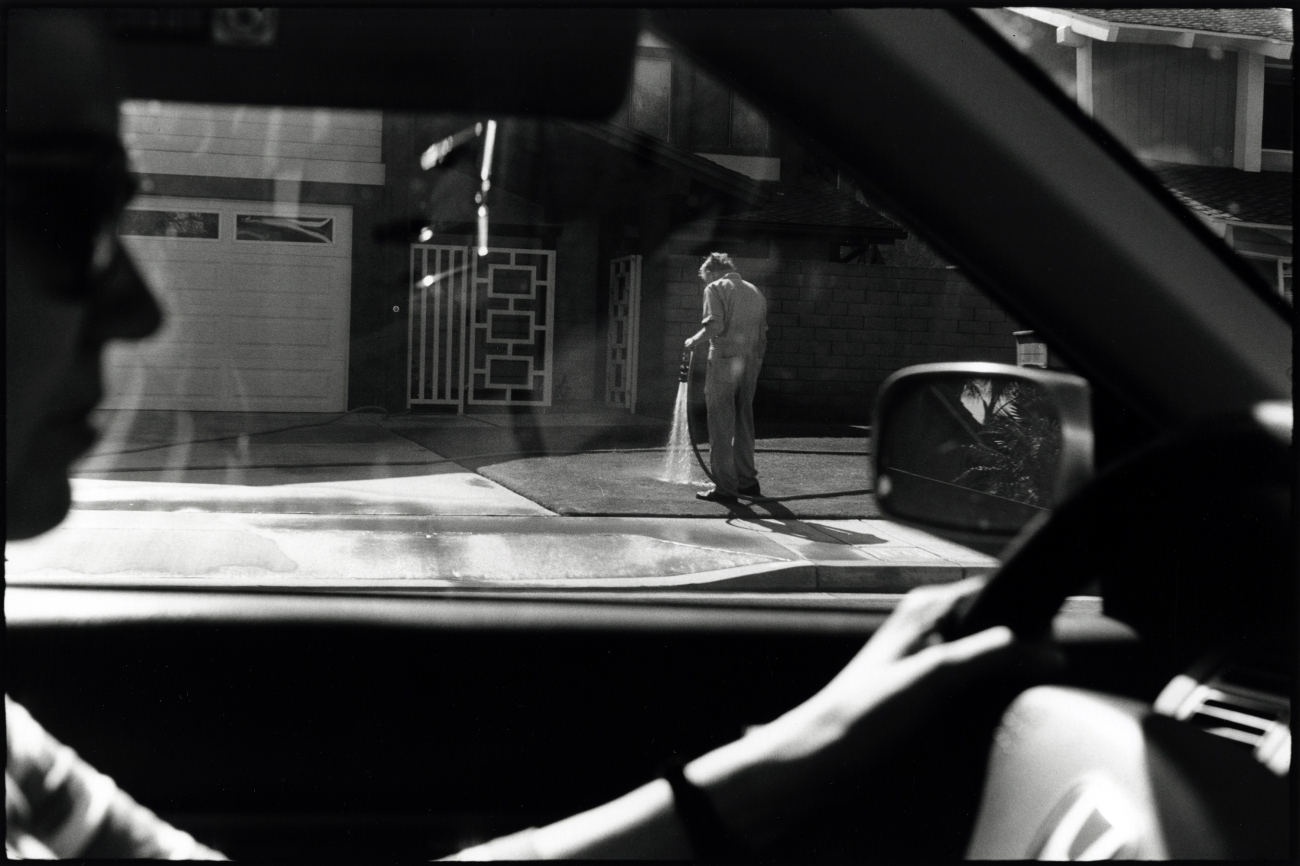 Through the juxtaposition of photographs, drawings and paintings, Templeton creates a portrait of beach culture and street life around Huntington Beach in Orange County. He allows the differences in bodies, politics, class, patriotism and spiritual beliefs to coexist peacefully in the works, calling attention to the fact that this might not be what happens in real life. Though painted during the pandemic, Templeton portrays people seemingly unaffected by the times, alive in their own bubbles, going about their everyday lives as if there was nothing amiss in the world. His depictions, while sympathetic, also present this world with a sense of matter of fact-ness amidst the irony.