Chaz Guest
A Passion for People 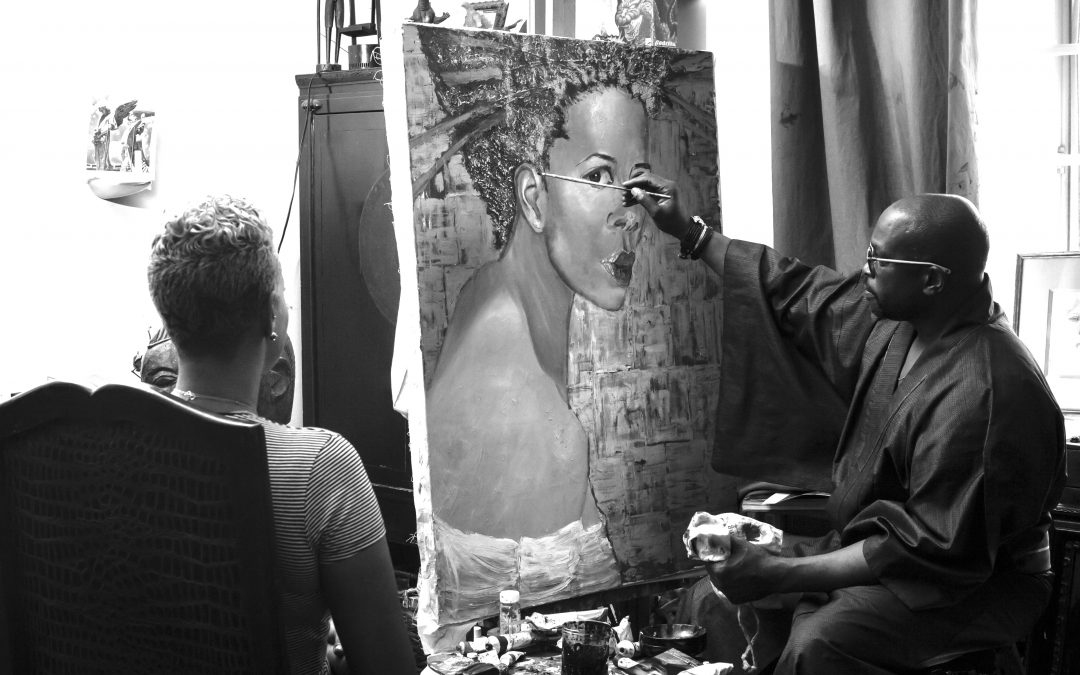 The Niagara Falls-born, Los Angeles-based painter and sculptor who was appointed Goodwill Ambassador to the Republic of Gambia in 2011 and whose time spent in Manhattan, Paris and Tokyo, at first as a fashion illustrator – infuses his figurative expressionist portraits with soul in order that people “think, feel and learn” – plumbs his own psychological depths only to discover what makes him love work and life.

What historical art figure would you like to have lunch with and why? I would love to have a meal with Balthus. Since his death – he died in 2001 at age 92 – I’ve gotten to know his family very well. His widow, Setsuko Klossowski de Rola, invited me to The Grand Chalet in Switzerland where I stayed for two weeks and I got to stand inside of his studio. 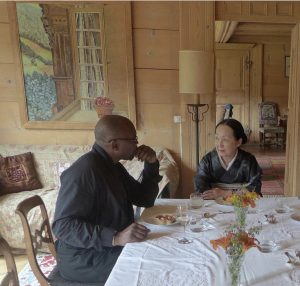 The artist with Setsuko Klossowski de Rola, The Grand Chalet

What did you purchase with the proceeds from your first sale? More art supplies and a beautiful gigantic easel [because] then I was able to buy linens and handmade paints – pure pigment paints – at David’s back in the day. He was in Soho.

What words or phrases do you overuse? Probably, ‘it’ll be all right.’ My son imitates me with the exact voice. 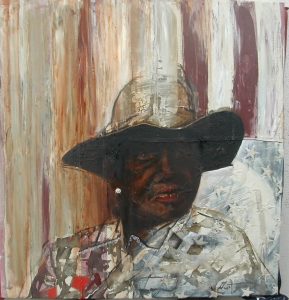 How do you know when a work is finished? In the morning when I look at it and there’s nothing else to be done at the moment.

When and where were you happiest? There are so many times – but in a ryokan [traditional Japanese inn] in Japan after having sushi and sex. 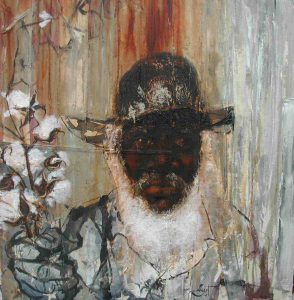 For My Dear Pearl (The Cotton Series), collection of Ambassador Michael and Mattie Lawson

What is your most treasured possession? I have so many, but right now – there are great photos of my grandmother and mother, and then I have a mold of my sons’ umbilical cords that I wear on my wrist and I had them cast in gold. The other prized possession is a painting by Romare Bearden. It’s called The Train, from an edition of 25. He used aquatint watercolors. I saved my money that I didn’t have to buy it. 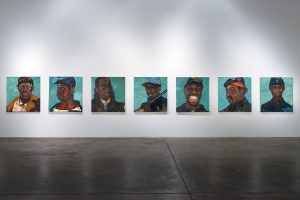 What is your ideal escape destination? That’s easy – in a ryokan in Japan, the countryside of Japan. But I don’t go often enough.

What’s the worst survival job you’ve ever had? I never had a job, I made money from [selling] my little paintings [but] sleeping on the roof as a painter in New York City was hard.

The artist “live-painting” the musicians of Naturally 7 at L.A.’s El Rey Theater, 2013

What TV series from your youth best describes your approach to life? I wasn’t allowed to watch much TV growing up, but I was inspired a lot by Spiderman in the 60s, and also The Hulk, because you wouldn’t want to make me angry.

What is your most treasured memory? My first exhibition in New York, Soho, in 1993. When the exhibit closed I went back just to see, and there I saw homeless people looking through the window at my paintings.

What makes you smile? The few friends that I have and the amazement of life. I’m just amazed by life and it makes me smile. 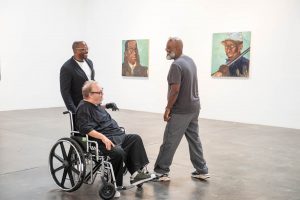 What makes you cry? Anything, my goodness. I can cry at a song. I cry happy tears. Mainly I cry tears of joy. I only cried tears of sorrow twice and they were both deaths – my nephew and the death of my mother. But basically, I cry happy tears, and when I’m singing. I just sing all the time, but never in the shower. There could be a song that really hits my heart. There’s a song that Stevie Wonder sings and it’s called Saturn. 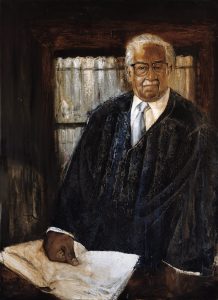 What is your go-to drink when you toast to a sale? My go-to drink is a bottle of Chateau Margaux. But it has to be 1986. It has to be ‘86, because that’s the best year ever. I went to Paris in ‘87 and I bought my first bottle after my first French fashion illustration sale for Christian Lacroix. I drank it with a beautiful, beautiful model from Givenchy, who later became my girlfriend for the next three years.

After an all-nighter, what’s your breakfast of champions? I’m not a breakfast person anymore, but [it would be] an egg white omelet with every single thing in it. 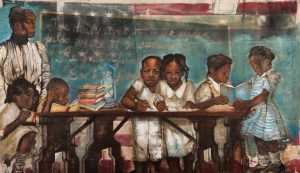 Who inspires you? Great musicians inspire me, like Coltrane, Thelonious Monk, Luciano Pavarotti – and Mahalia Jackson. Also Balthus – [he’s] so frickin’ intense. He took a year to do a painting and then the patience of Dalí, but just the whole artist thing about Pablo Picasso. He’s just an all-around artist guy. He reminds me of a bull and I’m just really intrigued by his strength and the amount of work he was able to do. I don’t want to fashion myself after him, but I’d like to reach that in this lifetime.

What’s your best quality? I care.

What’s your biggest flaw? I care. 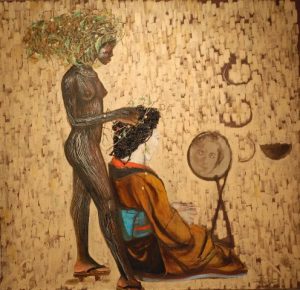 If you could change one thing about yourself, what would it be? To eat everything and not gain weight.

What is your current state of mind? Beautiful. Superlative. Creative. Excited. Engaged and inspired.

What do you consider your greatest achievement? My sons. My other achievement is the fact that I was able actually to figure out how to live as a painter. I’ve actually learned how to live. And what an achievement that is – that I have been able to do – by not going to art school and make a living, a good living. 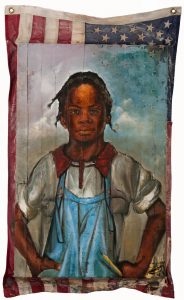 Maya Angelou As a Little Girl, collection of Oprah Winfrey

If you were to die and come back as a person or a thing, what would it be? A penis. No, don’t write that! I’d like to come back as a flower to share the sweetness of love.

Cover photo, The artist and his muse, Kellis, by Mike Mora