Sam Messer: ‘Go to it laughing’
Amalgamations of Styles and Attitudes 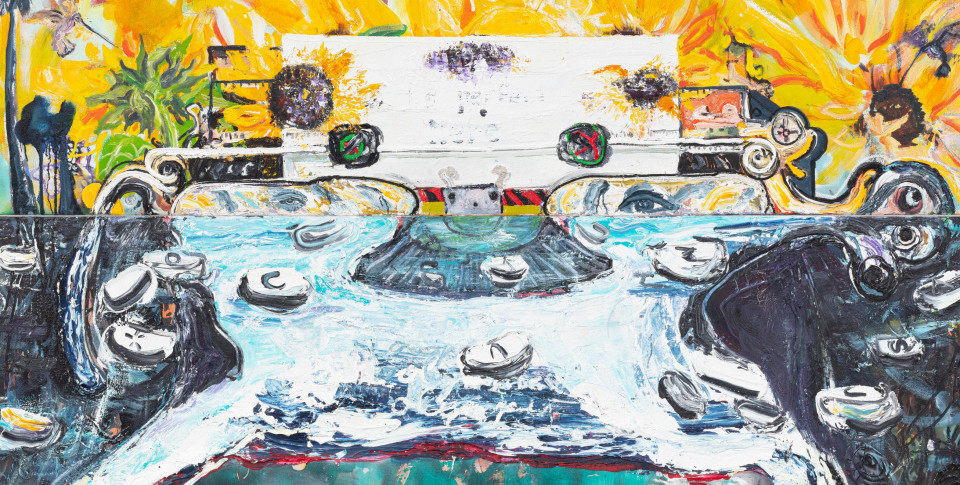 Go to it laughing

For some, a typewriter is an antiquated piece of machinery, akin to a rotary telephone. It predates digital technologies and relies on forcefully tapping the keys. Writing on a typewriter is much different than using a computer. It is hardly silent and often associated with a succession of loud clicks. In addition, one must insert a piece of paper to receive the ink, making the typing of numerous pages a laborious process. 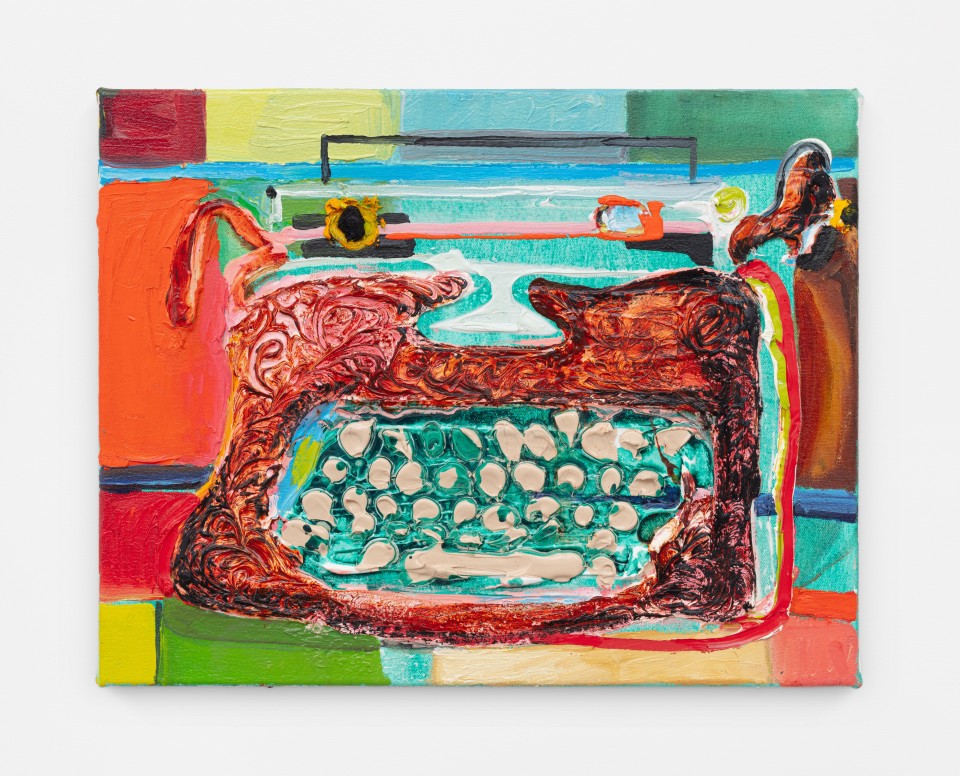 Sam Messer has been painting typewriters since the early 2000s. The fascination began during a creative exchange with the novelist Paul Auster (who wrote most of his works on an Olympia typewriter) that resulted in the 2002 book The Story of My Typewriter. Since then, Messer has continued to explore the myriad ways typewriters are personified and come to life through paint. 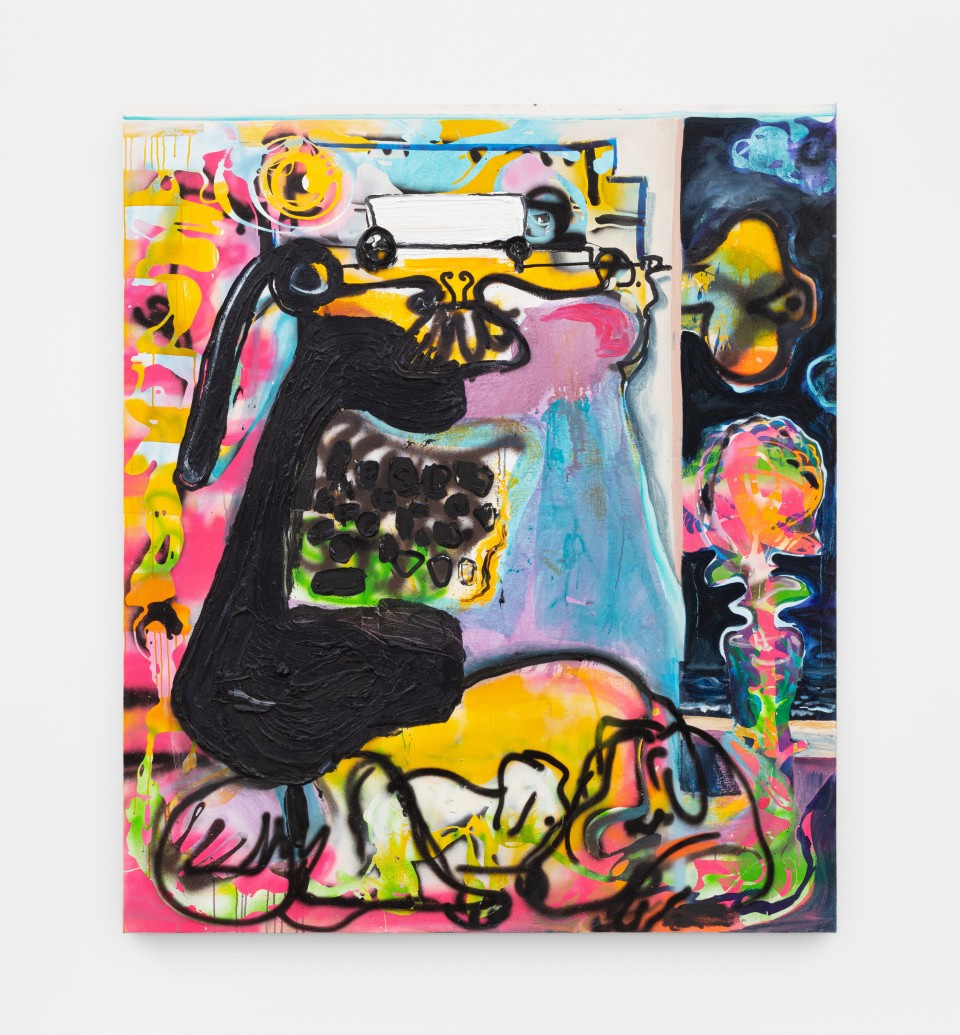 The twelve works on view at M+B were produced during the pandemic when Messer was on an extended stay in Los Angeles. Like previous incarnations, the canvases are covered with thick applications of oil paint, yet the palette now reflects the golden sunshine and deep blue waters associated with southern California. The playful and humorous short video Don’t worry baby, it’s perfect here accompanies the exhibition (but only can be accessed by a QR code label by the entrance as well as on the front desk). Set to a Beach Boys’ song, it pans through a selection of Messer’s paintings that capture the spirit of life in the Ocean Park neighborhood of Santa Monica— bungalows, cafes, the pier, walks on the beach, as well as swimmers and surfers in the ocean. 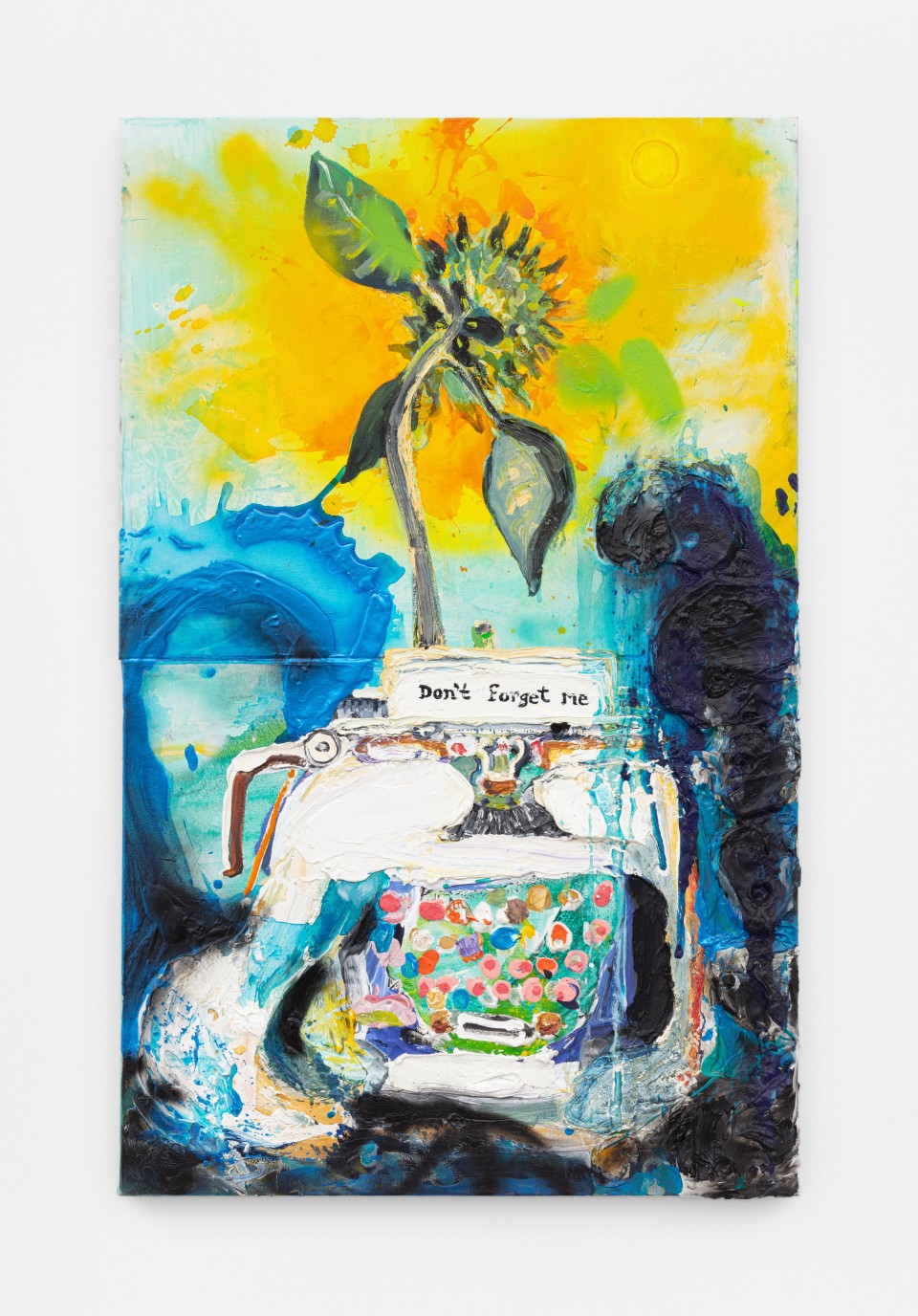 Messer’s typewriter paintings are often large-scale, thickly painted and aggressive works where the central object — a typewriter displayed in varying states of clarity — fills the majority of the canvas. Many of the backgrounds are brightly painted and filled with fragmented depictions that range from exteriors— palm trees, sun flowers and other plant life— to interiors, as well as gestural abstractions. In Seeking Signs (all works 2021), Messer outlines two dogs comfortably sleeping at the base of the composition beside a psychedelically painted vase. The typewriter fuses with the background wall to become both the face of an animal in black silhouette, as well as a functioning typewriter. 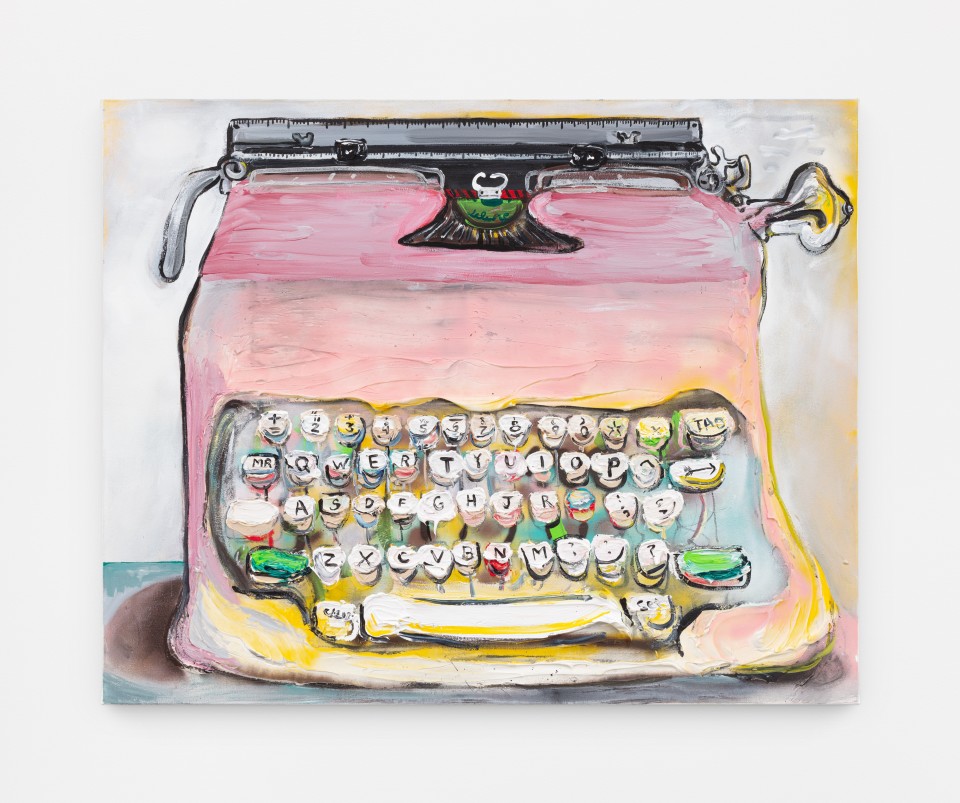 This is a Thingamabob

Blazing Gizmo sets the machine against a pink, orange and yellow background filled with swirling brushstrokes that evoke the flames of a raging fire. The typewriter sits in front of the flames, appearing to be a face where the keys are teeth, the carriage return becomes an ear and the spools turn into eyes. A piece of paper rises from the paper bail inscribed with the words: “loves fire.” In Don’t forget me, the typewriter appears to meld with the blue ocean that comprises the background. A large sunflower reaches into an impastoed yellow sky above a piece of paper on which is written: “don’t forget me.” Slo mo is almost a ghost image: its dominant colors a translucent pink and yellow. The typed message reads: “Out beyond ideas of wrongdoing and rightdoing there is a field. I’ll meet you there.” 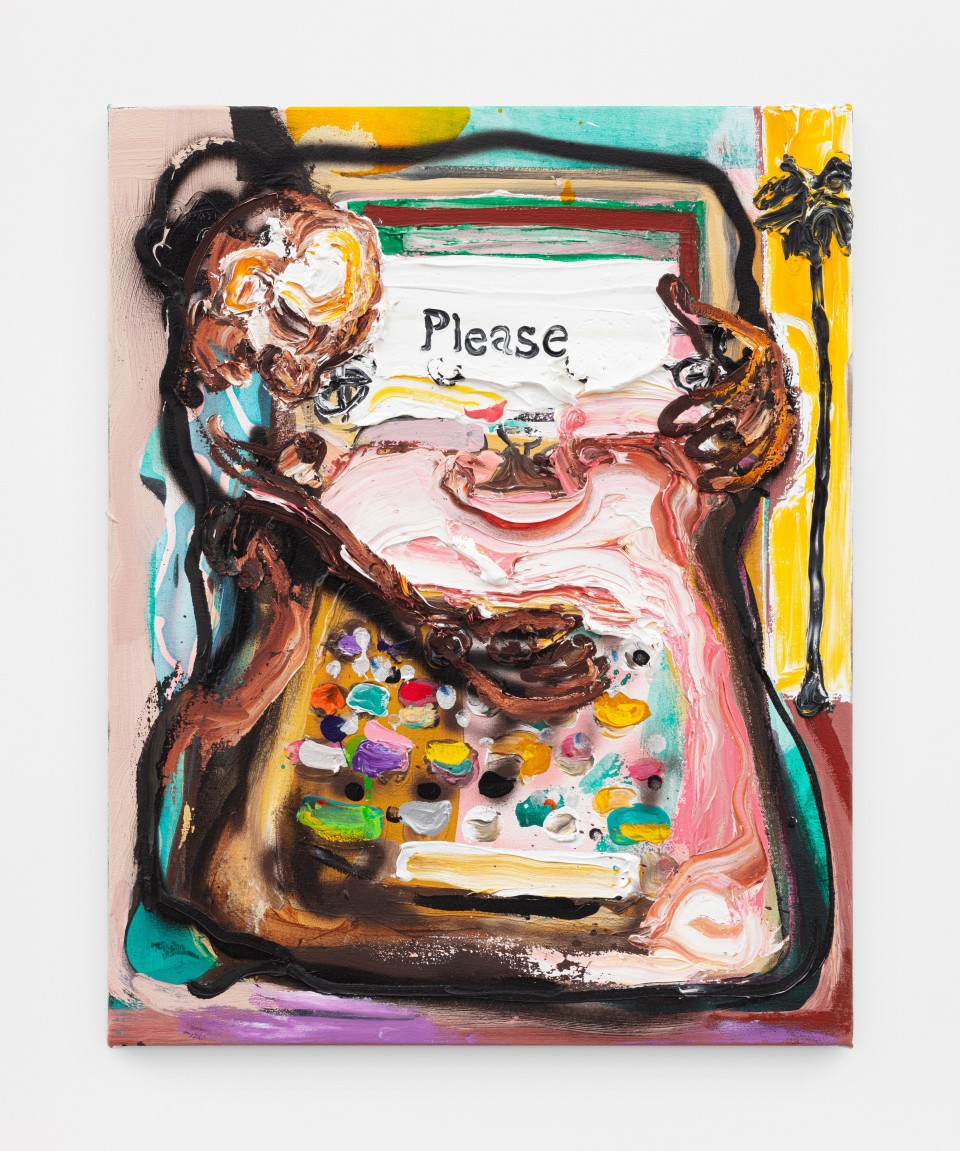 In the smaller work Formally Feral, the typewriter resembles an animal’s face with one yellow and one orange eye, a white nose (where the upper space of the typewriter forms a void) and white teeth surrounded by a cyan-toned background (the area of the keyboard). The machine sits on a table covered with colored rectangles, in front of a similarly patterned wall that recalls the composition of a Hans Hoffman painting. Realistically rendered eyes gaze out in Keep asking. In this painting, the typewriter rests on a table covered with a black and yellow speckled tablecloth set against a bright yellow wall. A small plant outlined in black is adjacent to the machine. The black and gray keys cover a void that approximates a large mouth suggesting the typewriter is a living being. 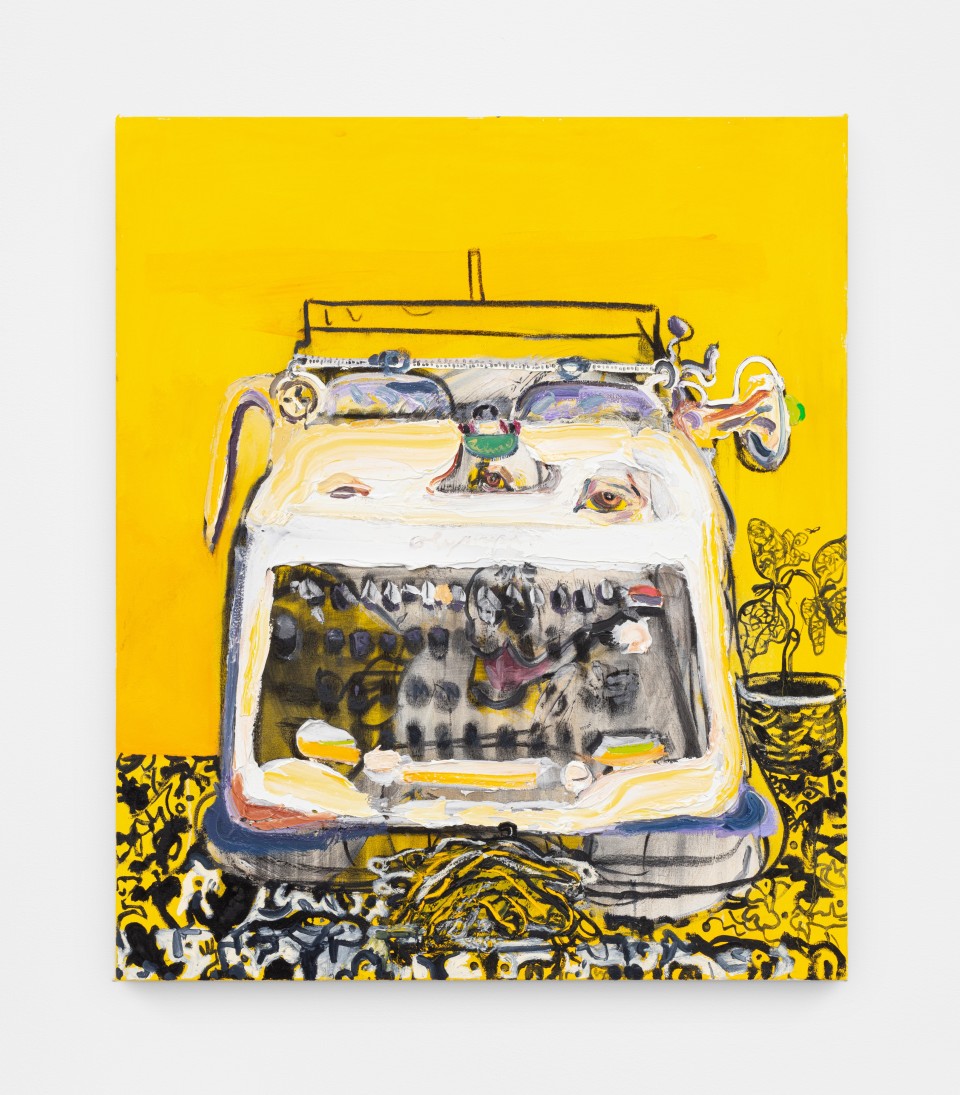 Messer’s typewriters are amalgamations of styles and attitudes. They communicate via written phrases (the typed pages inserted into the top of the machines) as well as through the expressive layers of paint. It is surprising that Messer can evoke such a range of emotions through the repetition of one object, but that is precisely the point. Each painting becomes a portrait that encompasses more than what the physical object represents. Messer infuses his typewriters with a sense of awareness, presence and nostalgia.