Mel Bochner: ‘DO I HAVE TO DRAW YOU A PICTURE?’
A Conceptualist at Heart 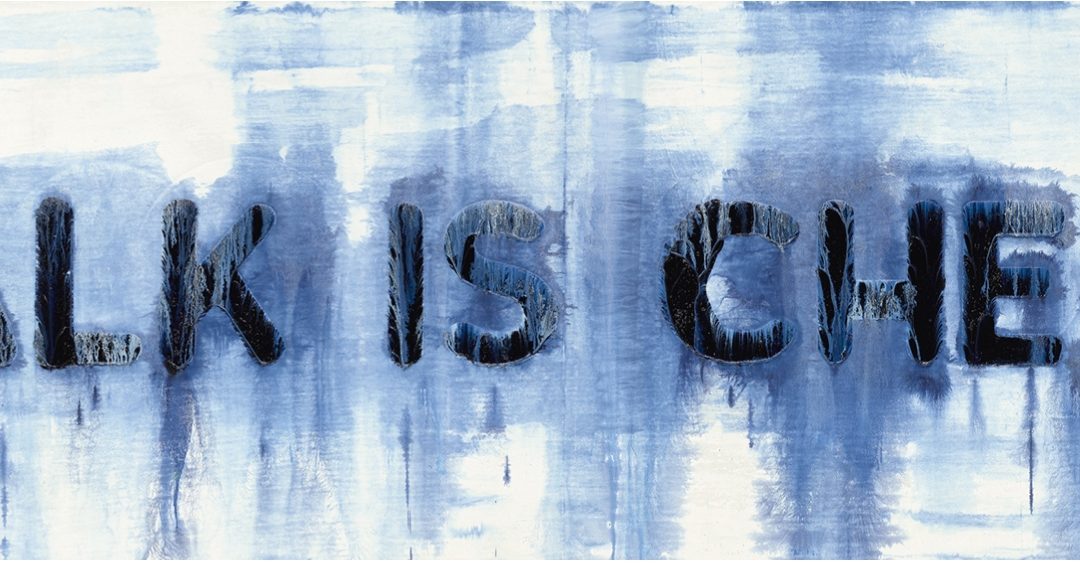 Do I Have to Draw You a Picture?

I was first introduced to Mel Bochner‘s work as a student while studying conceptual art and working on an exhibition from the collection of Sol LeWitt. Each student researched three artists: I chose Bochner because at that time I did not understand his work and wanted to make sense of it. Many of Bochner’s pieces were about measurement and process. He called memory into question, as well as spatial relationships. One work consisted of a small framed drawing of a pencil line and stated, ‘drawn at eye level’. What did that mean? Was it actually drawn at eye level? Or, was it hung at eye level? 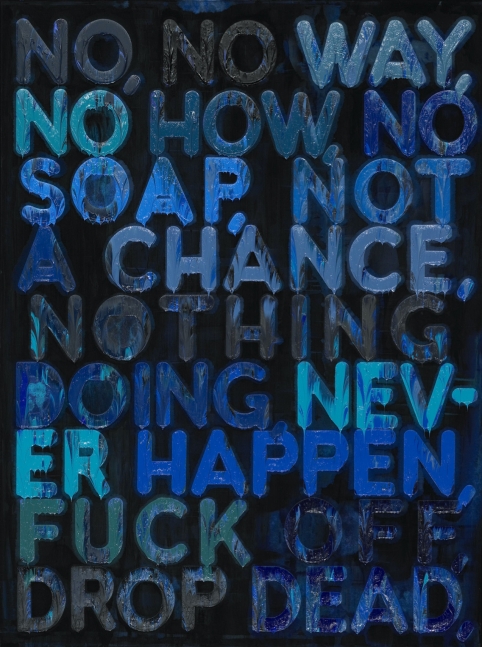 Another work pondered the meaning of “fourteen inches.” Here, the text ‘ 14″ ‘ was inserted between two long horizontal arrows. Bochner asked how do these words relate to the world around them?  I have followed Bochner’s work since the early 1980s and watched it morph from reductive and minimal to his current indulgence with lushly painted words. 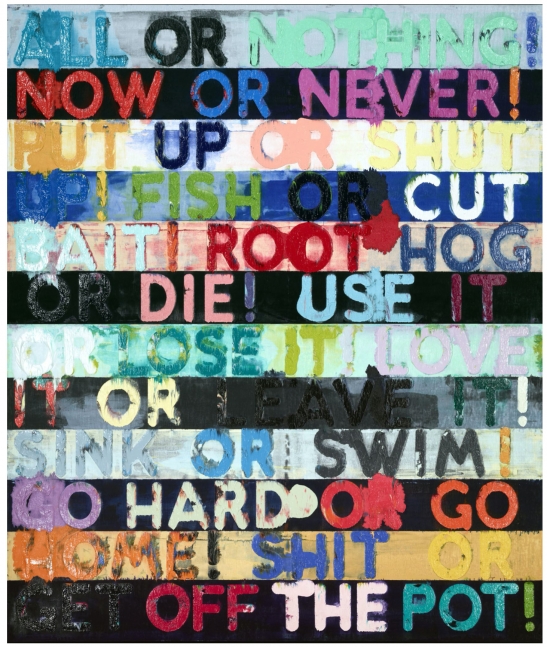 His latest exhibition titled DO I HAVE TO DRAW YOU A PICTURE? begins outside the gallery. Here, one confronts a “Variable Message Sign” like those used to announce road closures or traffic problems. It has been co-opted by Bochner to cycle through three phrases: “ha ha ha”. “blah blah blah” and “It could be worse”. These words follow viewers inside where they confront large oil on velvet paintings covered with rows of phrases, all in the same artist-designed font, but in varying sizes, colors and thicknesses. To create these canvases, Bochner paints wide, blotchy horizontal stripes in a range of colors over which he then stencils words and sentences. 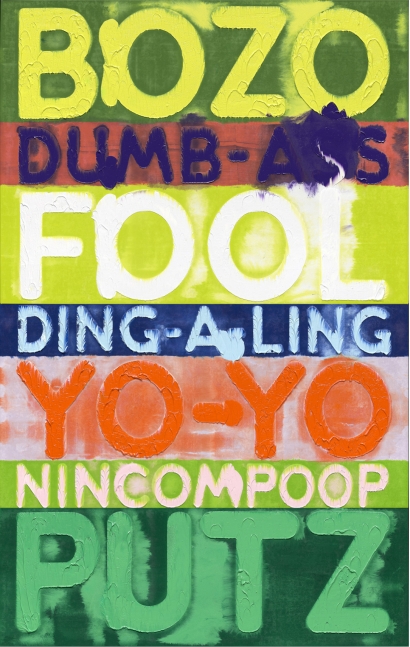 All or Nothing (2014) reads, ALL OR NOTHING! across the top in blue, black and lime green paint, followed by NOW OR NEVER! in red, blue and pink against a black background. It continues, line by line, in a similar manner. No (2009) is painted on black velvet and proclaims, NO, NO WAY across the top. Expanding into a poem, the words continue: NO HOW, NO / SOAP, NOT / A CHANCE, / NOTHING / DOING NEV- / ER HAPPEN, / FUCK OFF / DROP DEAD. 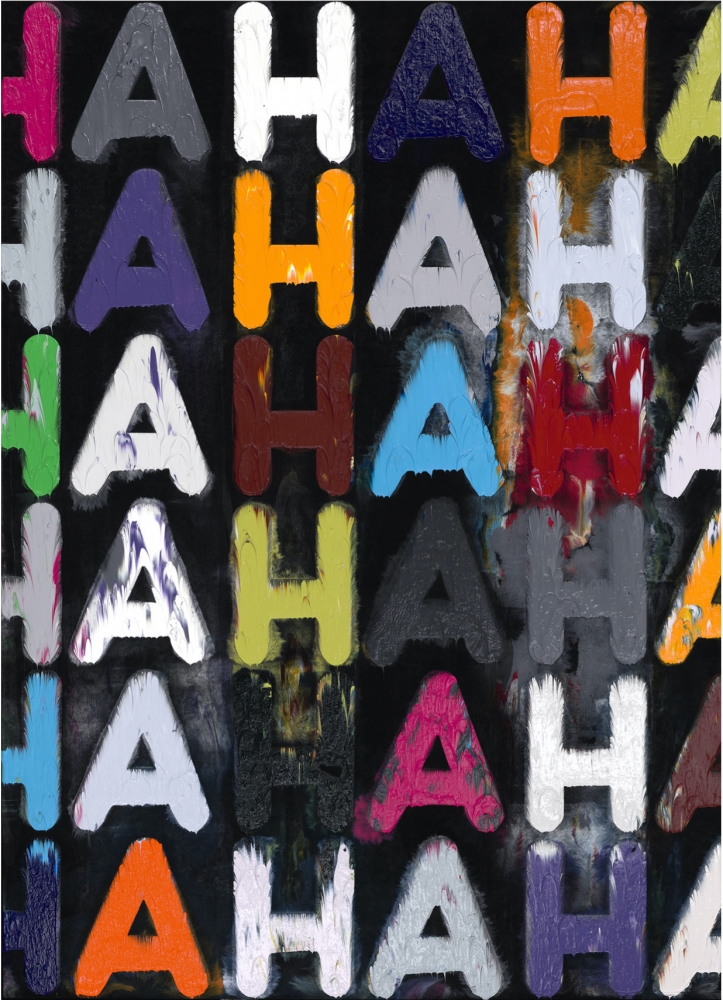 Bochner is not casual with his text and seems to enjoy being direct and confrontational, sometimes making the viewer squirm. In colors of yellow, orange and green, Bozo (2018) reads BOZO / DUMB-ASS / DING-A-LING / YO-YO / NINCOMPOOP / PUTZ. While it is impossible not to read the paintings and try to make sense of Bochner’s proclamations, the works also engage the act of painting using shape, color, tone and texture. Bochner is interested in the way paint reacts to velvet and the relationships between the color of the words and their backgrounds. As the press release states, the paintings are an “exploration of language in painting and painting as language.” 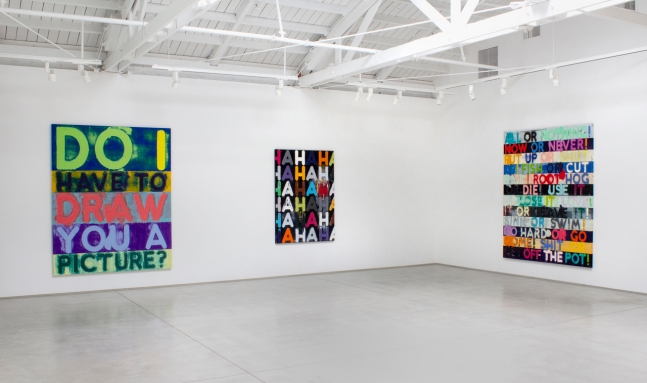 Installation view, DO I HAVE TO DRAW YOU A PICTURE?

Bochner remains a conceptualist at heart and while he has moved away from the more minimal “drawn at eye level”, his works still have a certain directness, discipline and rigor. Two large paintings spanning 90 inches across encapsulate Bochner’s intent. He asks, DO I HAVE TO DRAW YOU A PICTURE? and states, Talk is Cheap. Therein lies his underlying message about art and the state of the world.