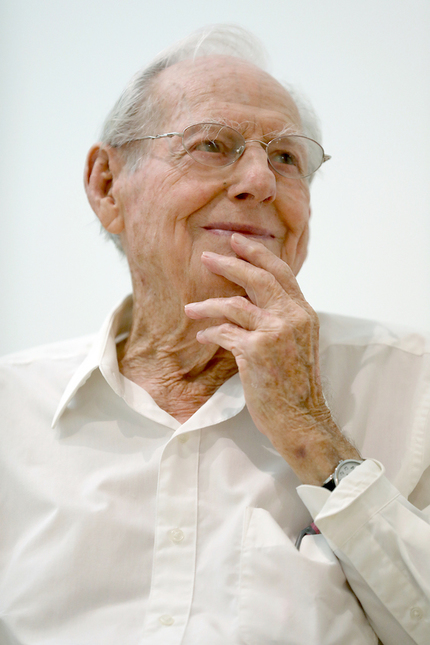 California-based painter Wayne Thiebaud, who blurred the distinction between commercial and fine art with deceptively ordinary still lifes of Americana staples like candy apples, gumball machines, and ice cream cones, has died at age 101. The news was announced by his New York gallery, Acquavella. Thiebaud launched his prolific seven-decade career in the early 1960s under the banner of Pop art, a label he resisted: At a time when many of his contemporaries appropriated everyday objects and mass imagery to skewer the American dream, Thiebaud stood out by sugarcoating it, confecting his evocations of childhood nostalgia from memory. He distinguished his compositions from traditional realist painting too, lending his paintings a near conceptual quality through their beguiling compositions, striking colors, theatrical lighting, and punning textures.

Born in 1920 in Mesa, Arizona, to a baker mother and inventor father, Thiebaud spent his early years in Southern California and at his uncle’s ranch in Utah during the Great Depression. An aspiring cartoonist, he worked as a tracer for Disney Studios and a sign painter before enlisting in the air force, serving as an artist in the First Motion Picture Unit from 1942 to 1945. By the end of the decade, he grew interested in fine art, and earned degrees from what is now California State University, Sacramento, soon becoming an influential professor at the University of California, Davis, where he remained until 1991. During a trip to New York in the 1950s he became influenced by the abstractions of Elaine and Willem de Kooning as well as the neo-Dadaism of Robert Rauschenberg and Jasper Johns, and learned to fuse his commercial training with the New York School’s experimental expressionism. He soon found his signature subject—mouthwatering desserts glimpsed behind windows—but struggled to gain serious recognition (one writer dubbed him the “hungriest artist in California”). His breakthrough came in 1962, when his long-term gallerist Allan Stone first gave him a solo show, and when Sidney Janis filled a rented storefront on West Fifty-Seventh Street with work by over fifty artists including Thiebaud, Roy Lichtenstein, Robert Indiana, Tom Wesselmann, and Andy Warhol. (Robert Motherwell, Mark Rothko, Philip Guston and Adolph Gottlieb walked out in protest.)

Wary of pigeonholing himself, Thiebaud quickly expanded his palate, going on to create bodies of work devoted to the California Delta, the vertiginous streets of San Francisco, and clowns, among other subjects. His work has been collected by major institutions worldwide and the subject of numerous gallery and museum exhibitions, including retrospectives at the Fine Arts Museum of San Francisco in 2000 and at Sacramento’s Crocker Art Museum last year on occasion of his centennial. New York’s Morgan Library mounted “Wayne Thiebaud: Draftsman,” which surveyed his works on paper, in 2018. Thiebaud continued to play tennis regularly and paint every day in his later years. “I think of myself as a beginner,” he said. “Sometimes that’s the whole joy. If you could just do it, there’d be no point in doing it.”