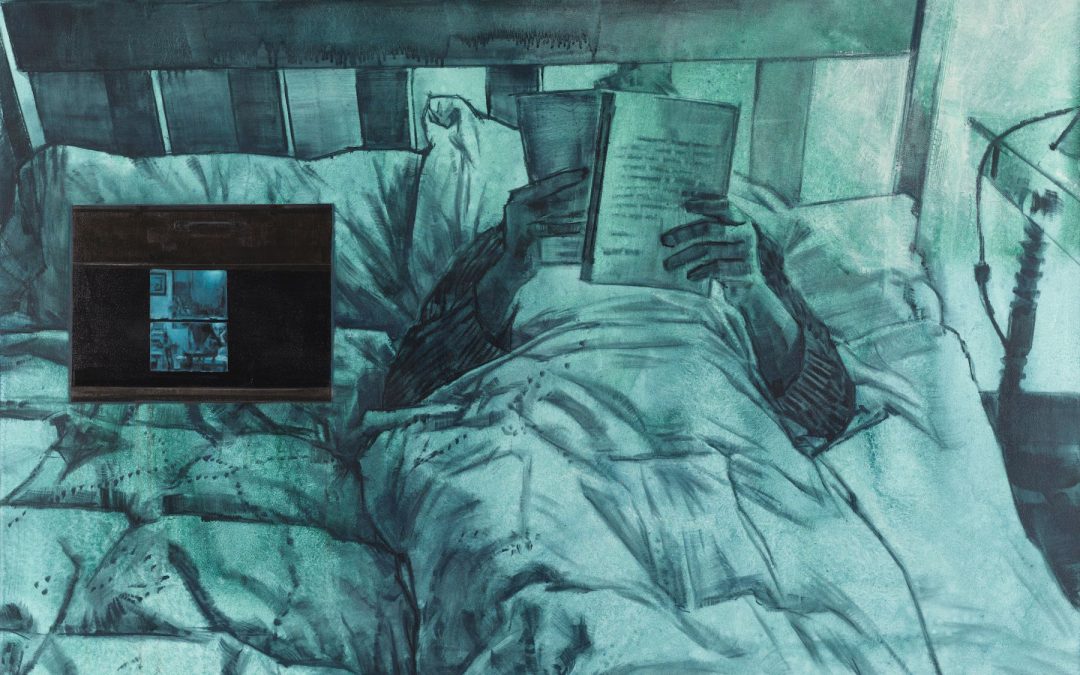 Laura Karetzky is interested in what occurs on screens and through windows, often inserting small rectangles into larger painted narratives to create junctures in time and across spaces. In Embedded, a previous body of work, she juxtaposed disparate moments by inserting fragmented views that resemble cell phone selfies and snapshots into paintings that documented aspects of everyday life. For Concurrence, she limits her observation to what occurs in a lone window located in a building she sees from her apartment. The set-up is not unlike Hitchcock‘s Rear Window, or the recent photographs by Brendan Lott, who records the goings on in apartments he sees from the window of his downtown Los Angeles loft. Karetzky’s recent work, like Lott’s is pandemic specific and focuses on the isolation of quarantine. While voyeuristic, the works of both artists are as much about longing and self-reflection as they are about the doings of others. 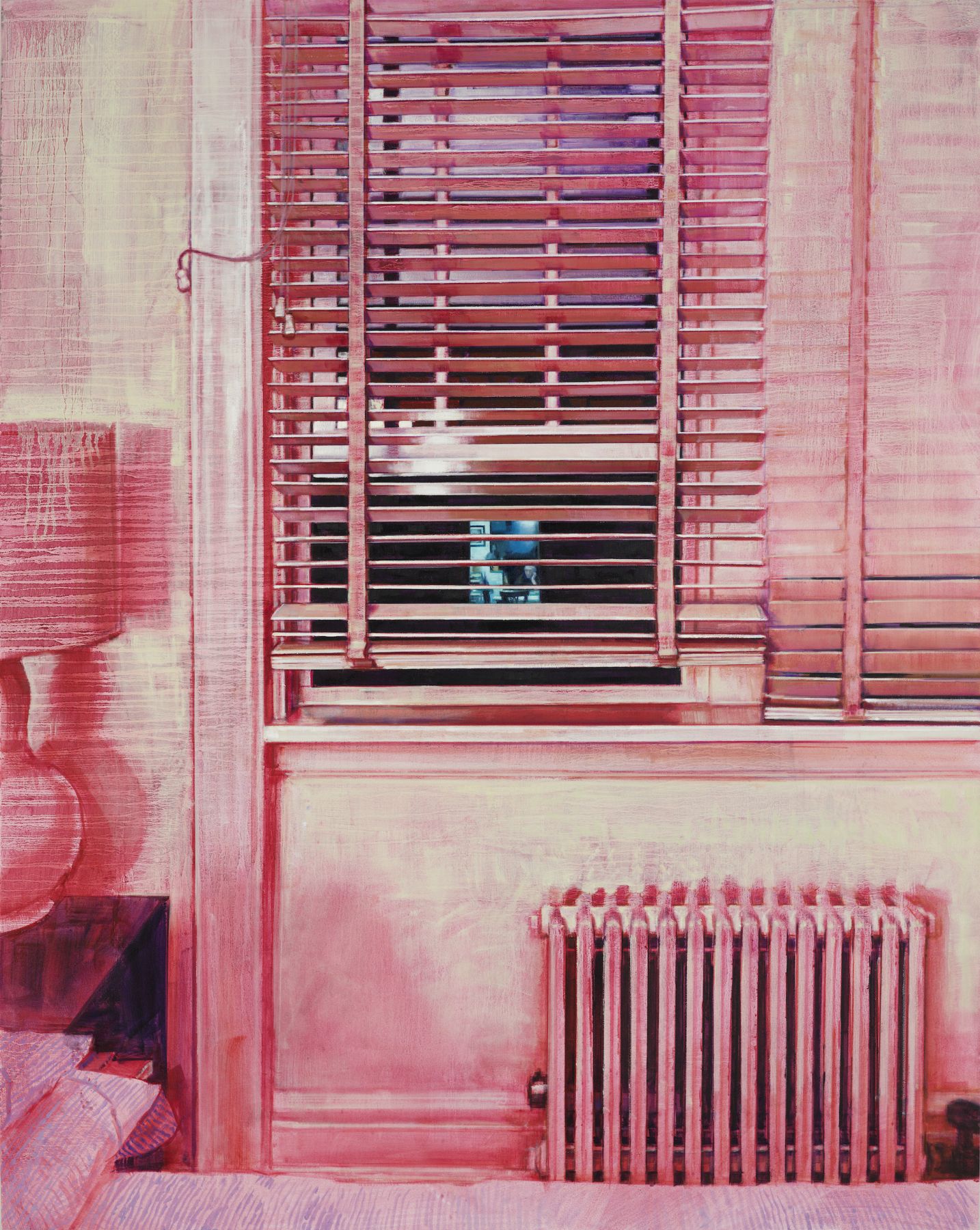 Karetzky’s oil on wood paintings are realistically rendered works created with a purposely limited, almost monochromatic palette. In the gallery, they are installed as a quasi-linear narrative that goes back and forth between close-up and distant views of the scene— looking across at a window in an adjacent building. As Karetzky looks out her window between the slats of her blinds, she sees a figure framed within another illuminated window. 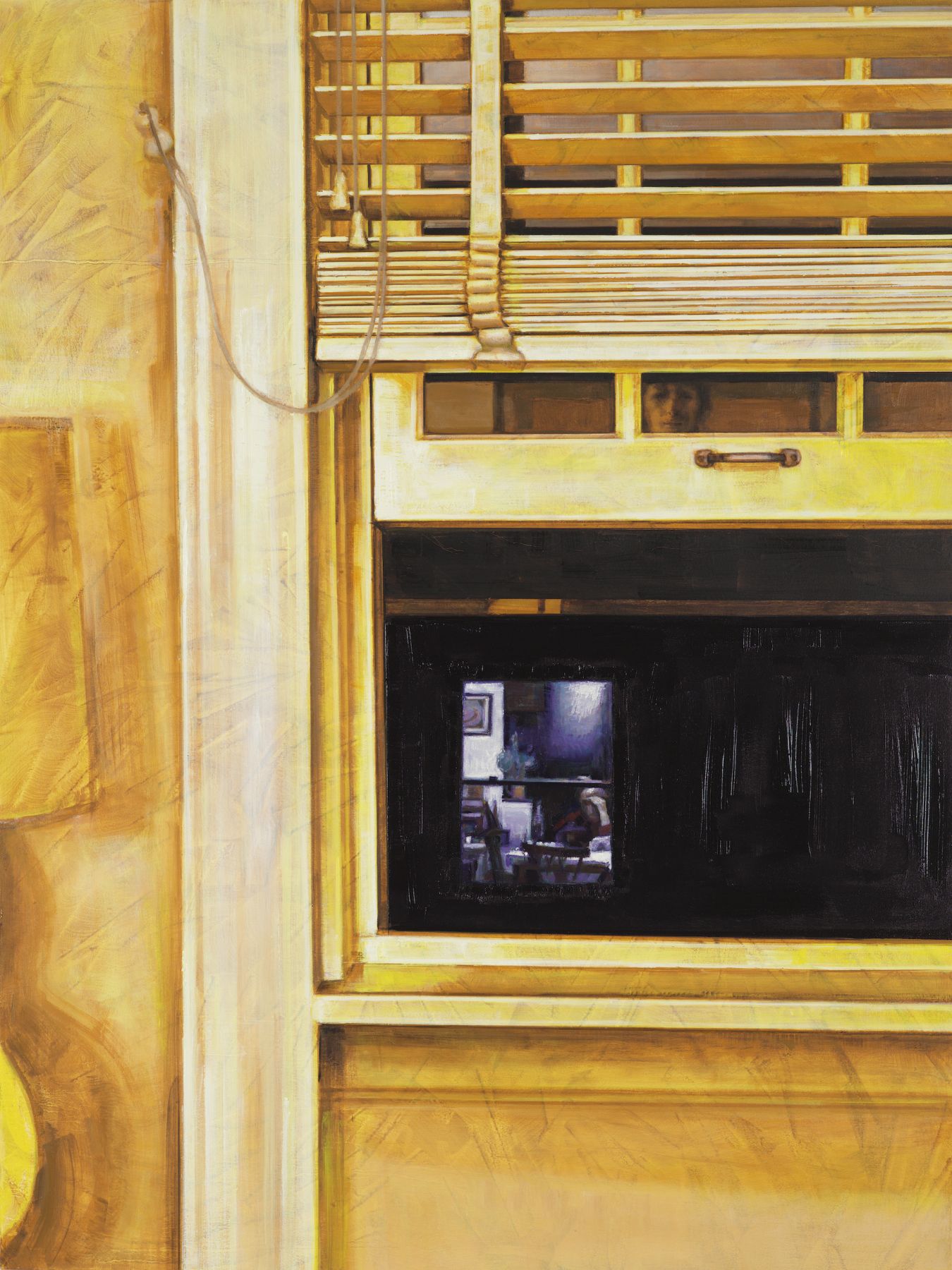 Unable to discern if the figure is a woman or man, old or young, Karetzky indulges in the ambiguity, painting them at a table, reading or eating, always alone, no matter the time of day. While Karetzky is curious about this person, she also accepts that it is unlikely they will ever cross paths — this not knowing allows her to project and fantasize. 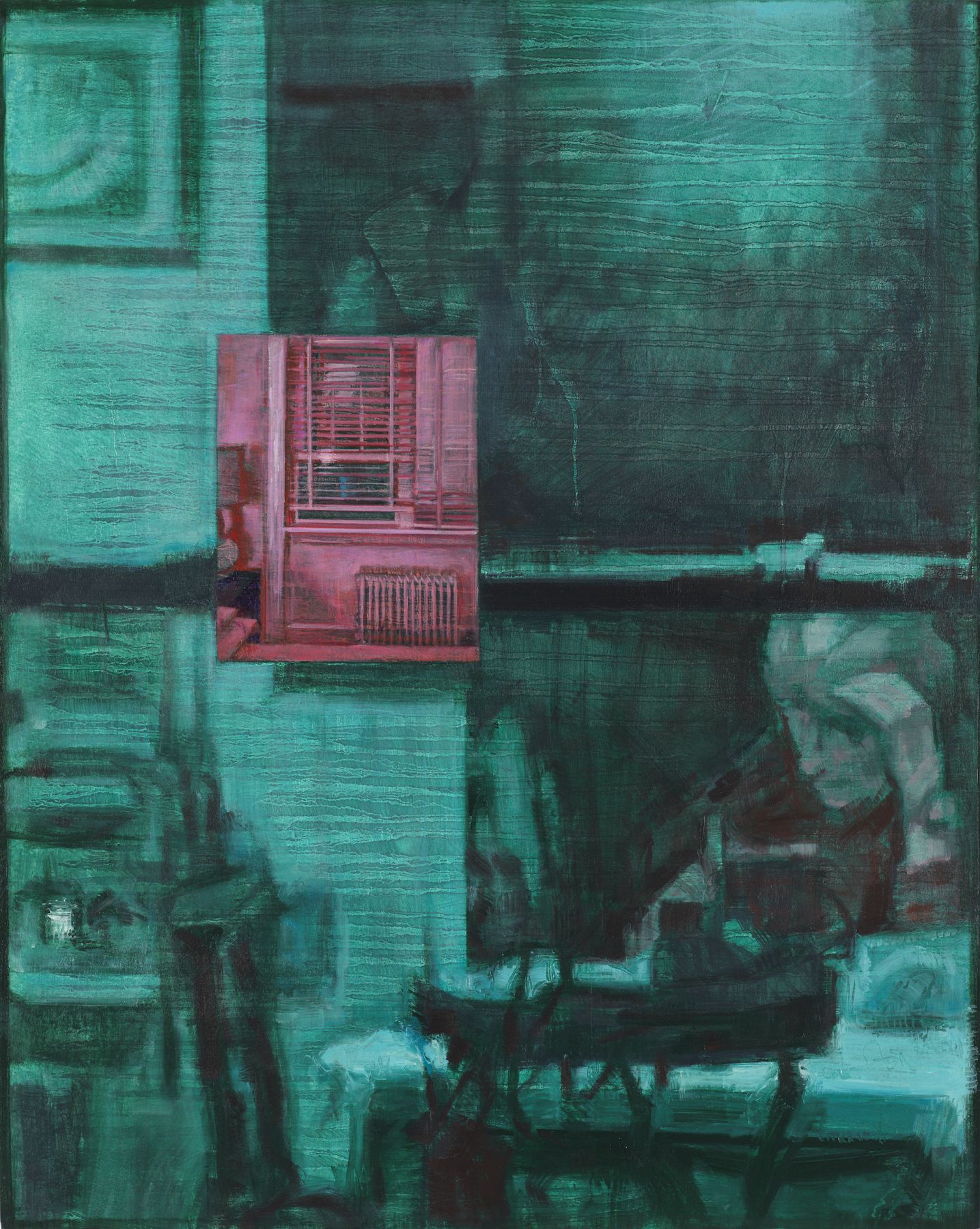 Throughout the series of paintings, the figure is in almost the same position. What changes is the vantage point and what aspect of her apartment Karetzky includes. In The Window From My Window (all works 2021) the window is viewed through slats in horizontal blinds. In Pink Room, the window is a tiny element, shifting the focus to the blinds. Karetzky borders the pink hued composition with a sliver of a bedside table and lamp, a bed with two pillows, as well as an old-fashioned radiator. Yet, the blue glow of the distant window, now centered in the painting, still commands attention. 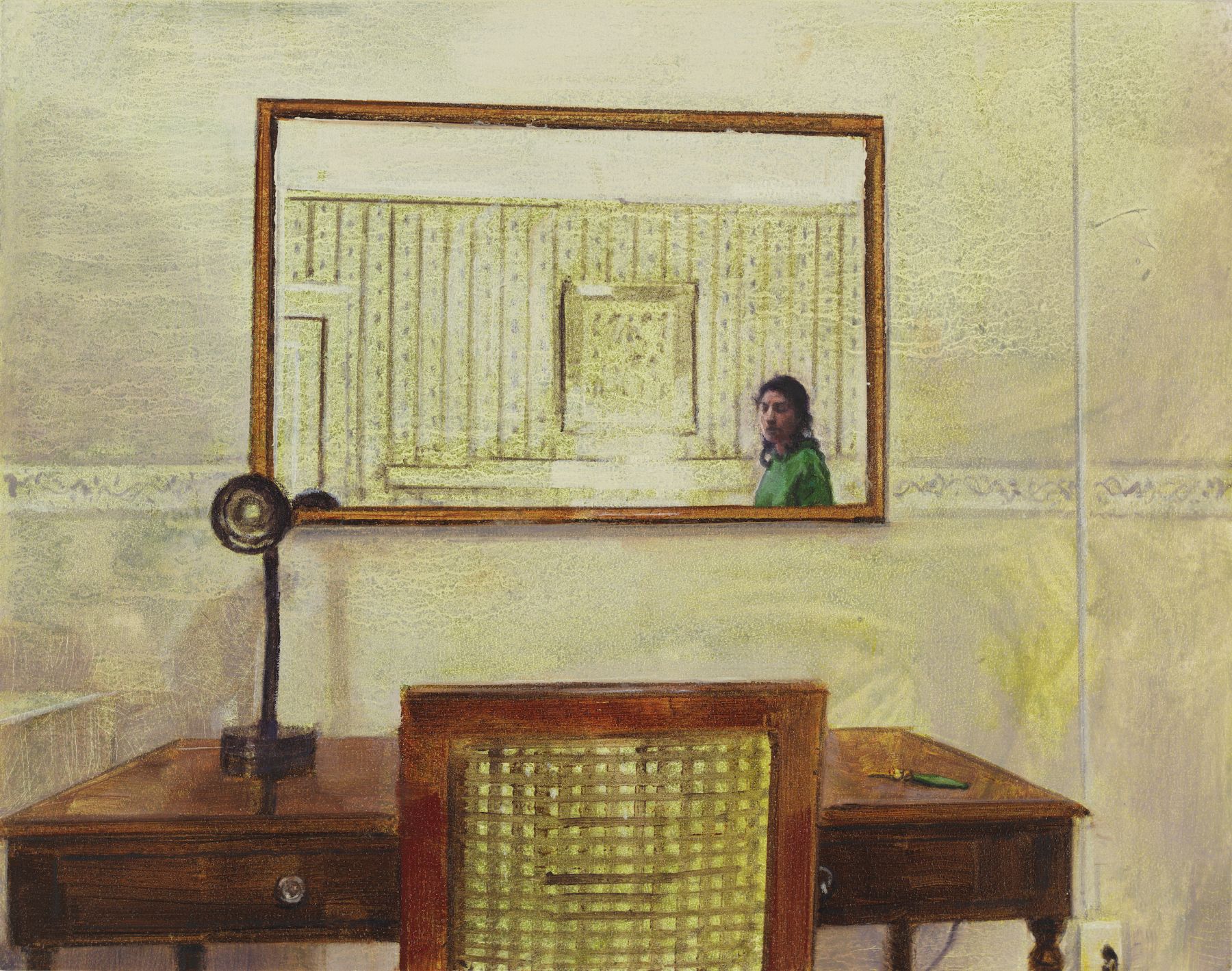 But Who’s Watching is a predominantly yellow painting depicting the same interior space although in this work, the window is open and the blinds are raised. The neighbor’s illuminated interior remains the centerpiece, yet beneath the blinds and reflected in a small pane of window glass is the face of a woman, perhaps Karetzky, looking out, as well as back at the viewer. 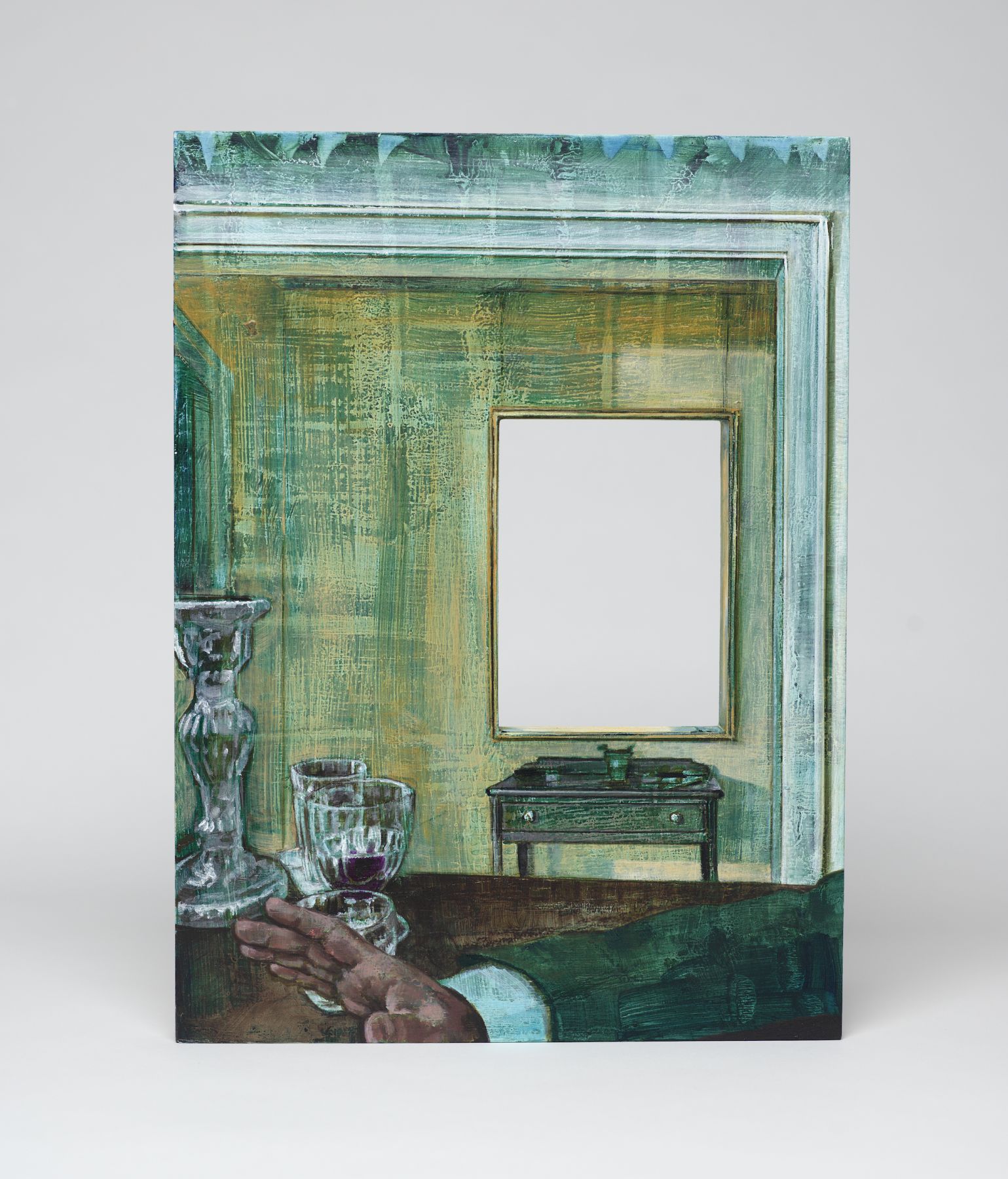 Concurrence: Of Points and Palms

Karetzky takes this idea (looking in while simultaneously looking out) a step further by creating double-sided (sculptural) paintings. Three of them sit on white pedestals in the center of the gallery space bringing a three-dimensionality to the scenes depicted. In these pieces, Karetzky cuts holes in the paintings which literally become frames (or windows) to see through. Interiors and exteriors, close-ups and distant views align as the viewer encircles these enticing works. 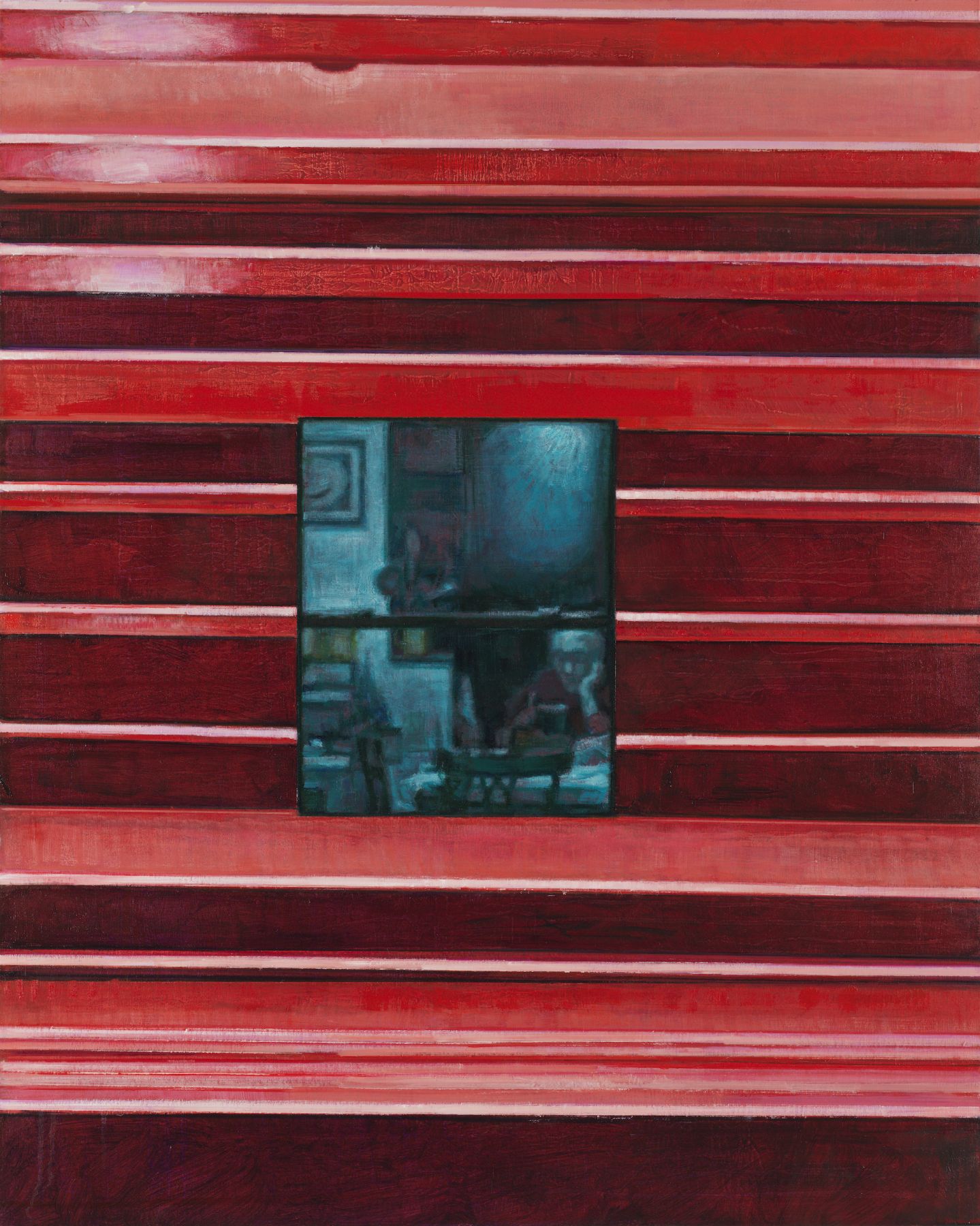 Inversion of an Inverted Painting

Concurrence: All That Is Seen From is a painting of an interior space with a desk, lamp, chair and mirror that reflects the opposite wall where a young woman, as well as another window or mirror appear. This second mirror/window becomes a physical hole and depending on the vantage point within the gallery, this void is filled with a view of a painting on the wall behind it. Karetzky plays with ideas of simultaneity and what is seen or inferred through painted visual illusions. The works concretize the sense of distance and isolation many felt during the pandemic, yet rather than see limitations, Karetzky explores possibilities.