Ralph Steadman: ‘A Life in Ink’
An Artist Nonpareil 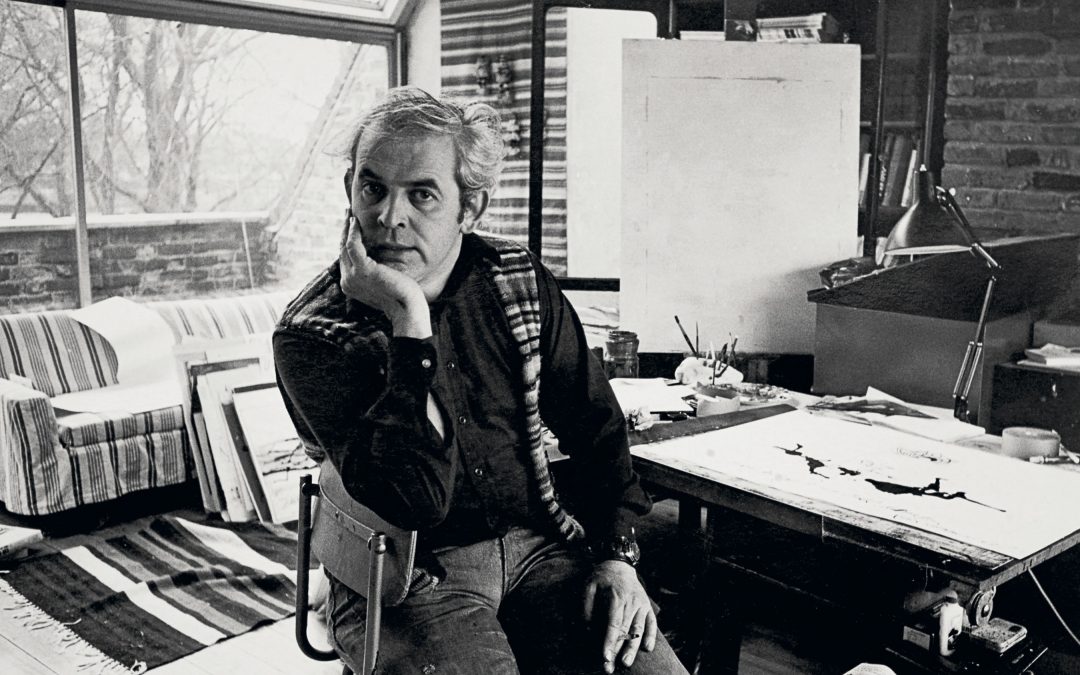 The savage satirist and internationally renowned 85-year old British illustrator who captured the zeitgeist over decades with his political and social caricatures, cartoons, album covers and art books with his signature ink-splatter style – and forged an indelible collaboration and friendship with the late Gonzo journalist Hunter S. Thompson – plumbs his own psychological depths in his recently released career-retrospective tome, Ralph Steadman: A Life in Ink, and also takes ArtNowLA’s Da Vinci Questionnaire to discover what makes him love work and life.

What historical art figure would you like to have lunch with and why? Marcel Duchamp because his way of thinking was so uncommon and curious. His output was quite extraordinary in the way he treated his artwork as though it were another person. 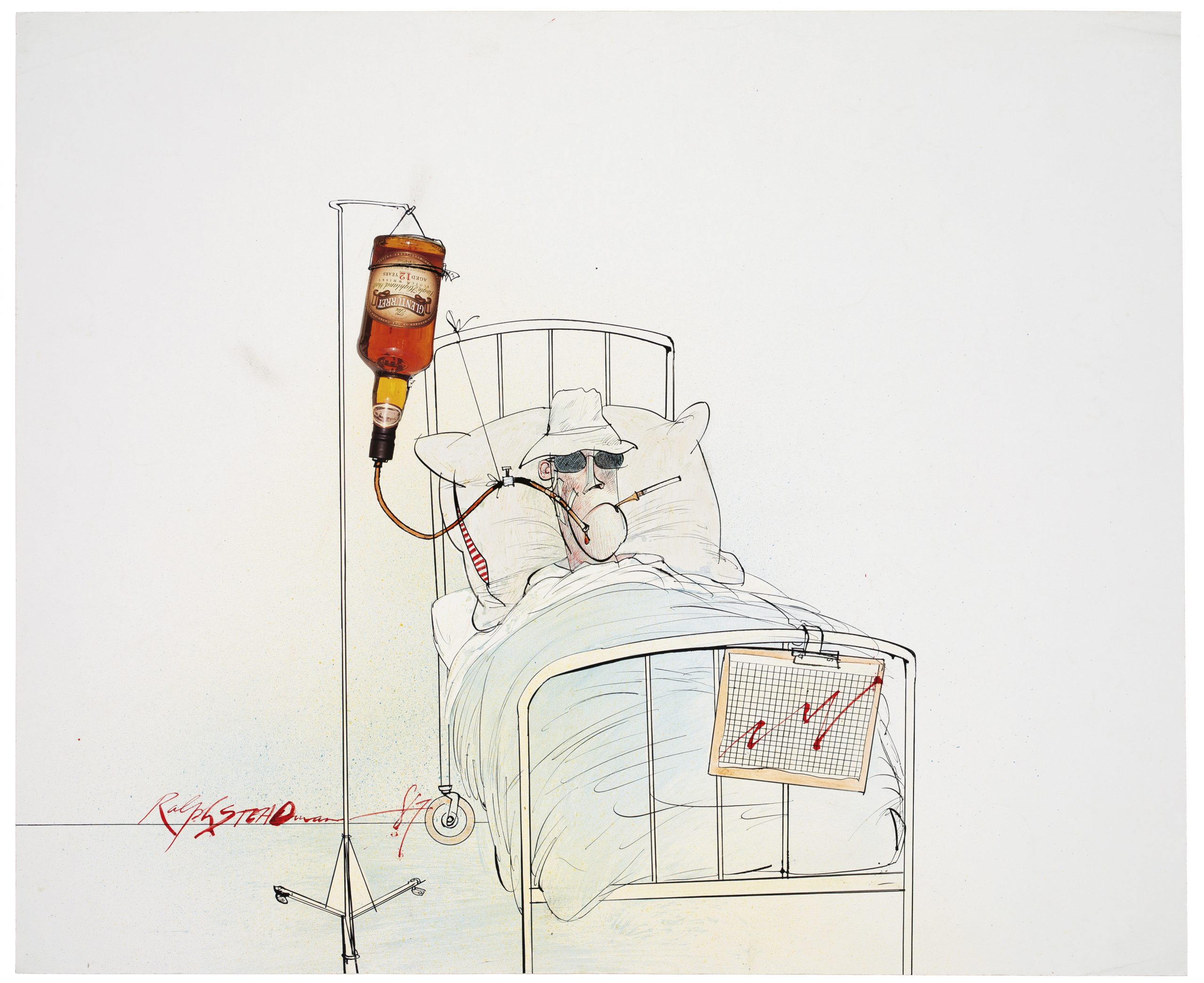 What did you purchase with the proceeds from your first sale? A beer in the local pub. 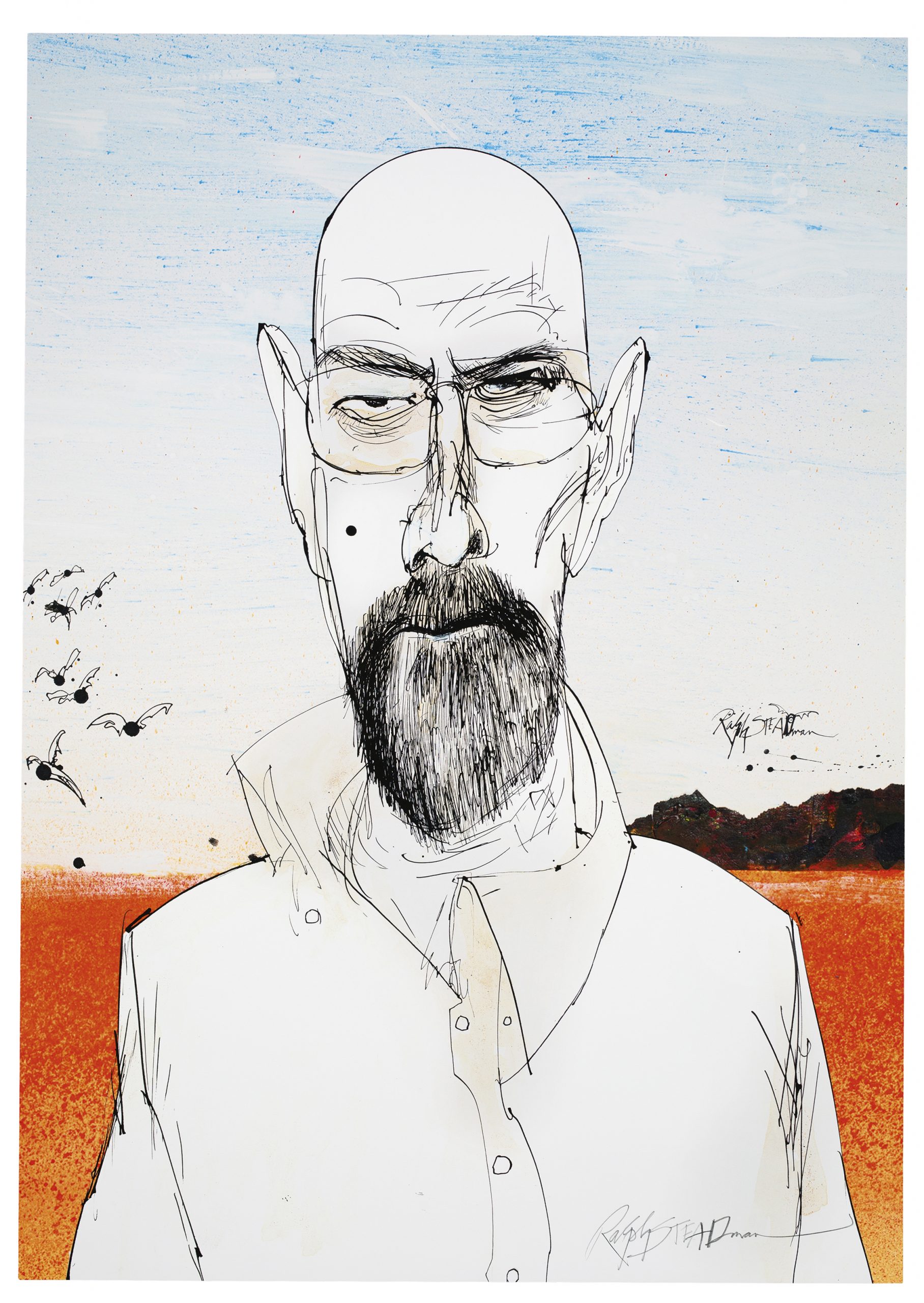 What words or phrases do you overuse? As a matter of fact and Stop it, you daft thing, you are bending my membership card. 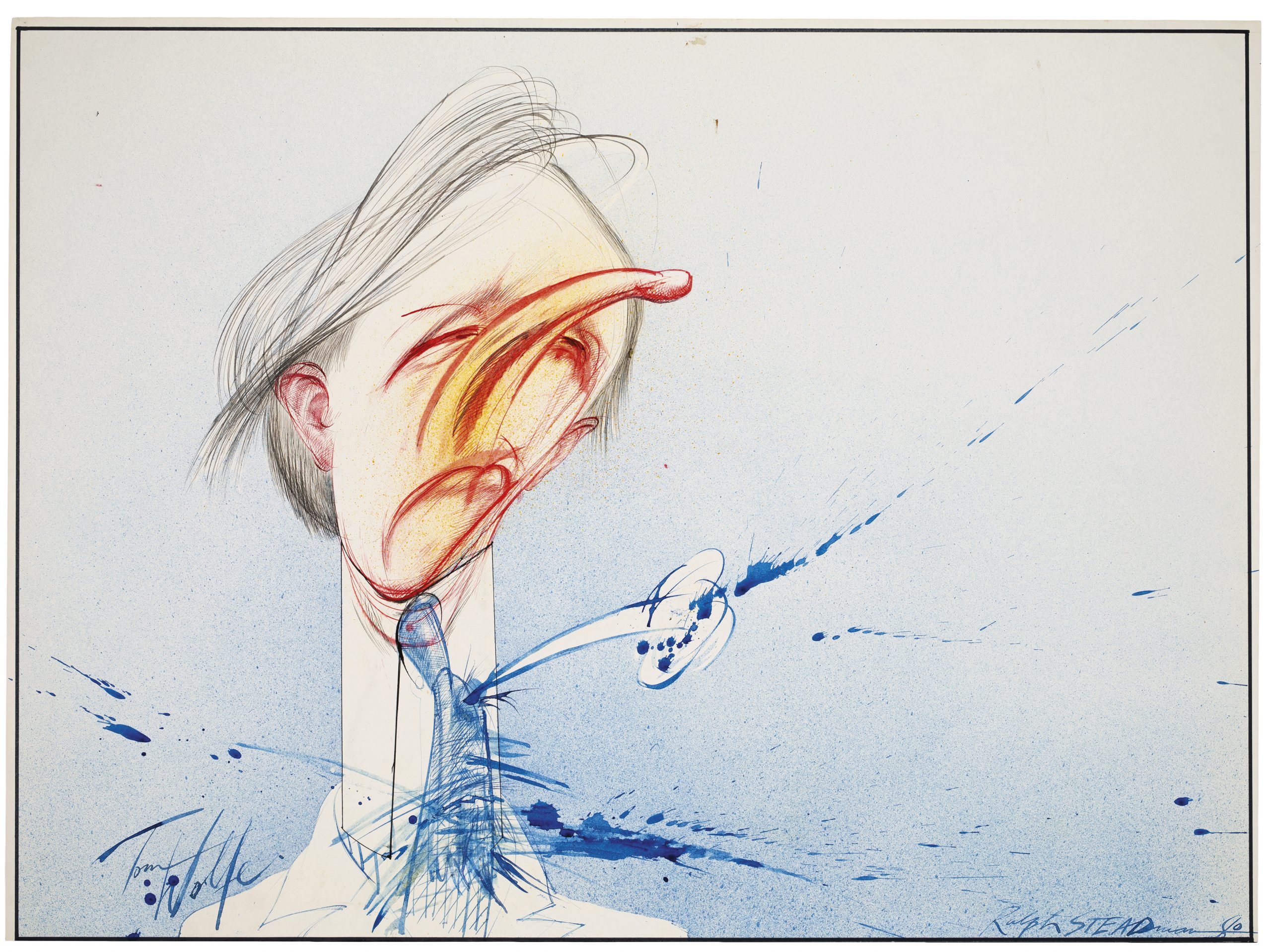 How do you know when a work is finished? It just feels like I cannot add anything else of any interest. 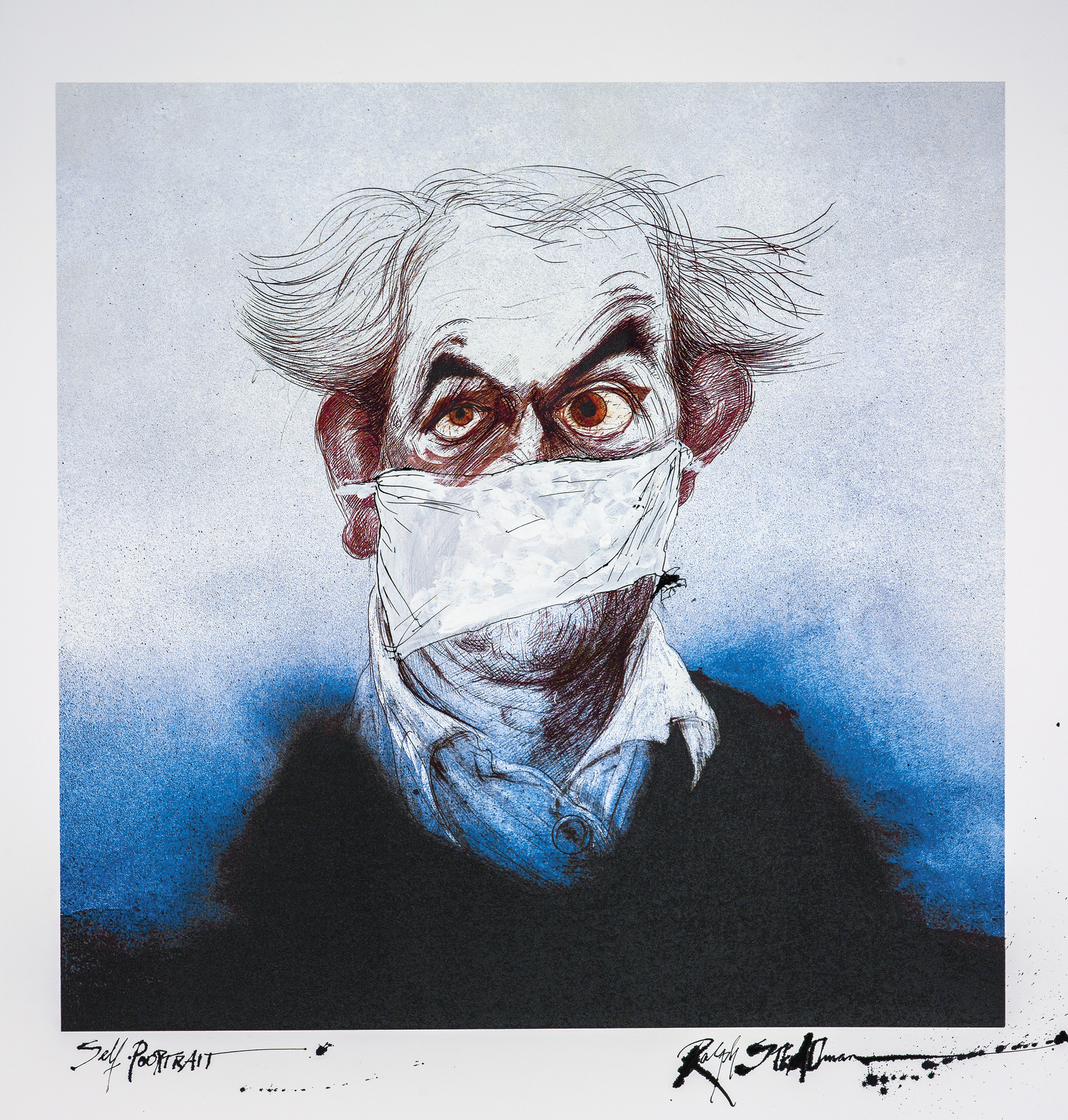 When and where were you happiest? 1980 when we moved in our current home.

What is your most treasured possession? My bird warbler.

Where is your ideal escape destination? Avatrana in Southern Italy. 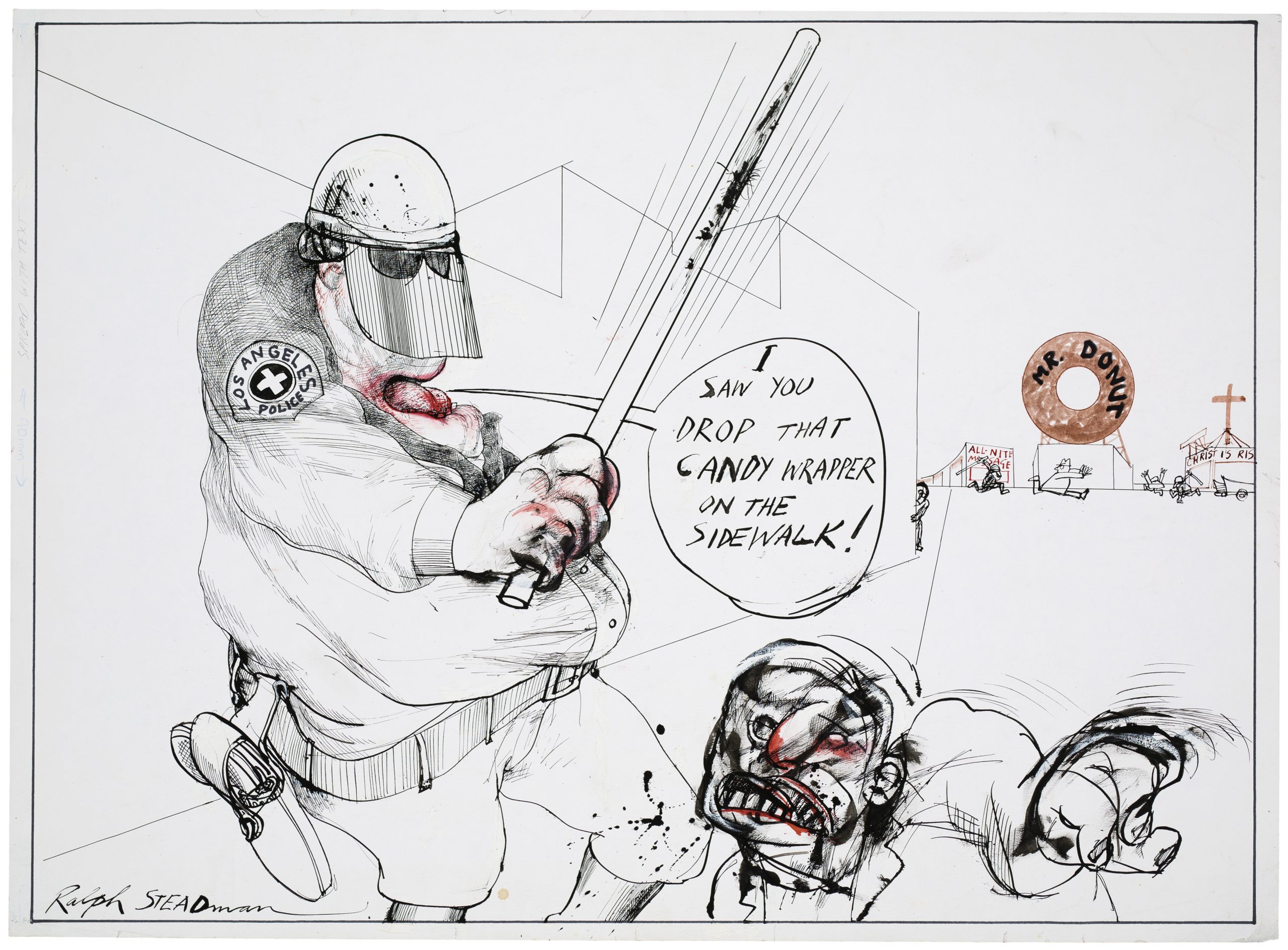 What TV series from your youth best describes your approach to life? Hancock’s Half Hour. 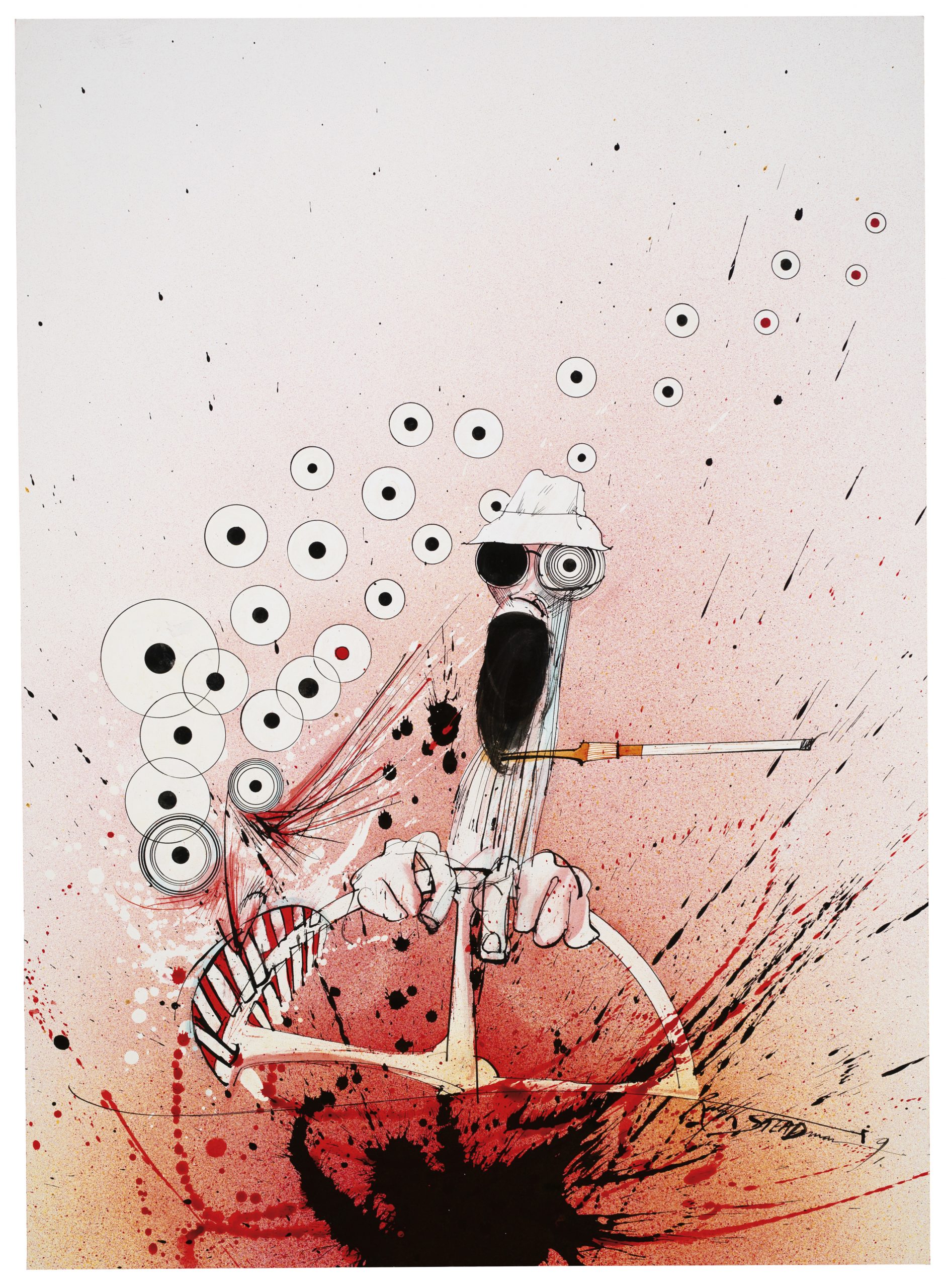 “Hunter would drive his Red Shark, steering with one hand, gripping a bottle of Chivas Regal with the other.” Hunter at the Wheel, 1991

If you could change one thing about yourself, what would it be? My age. 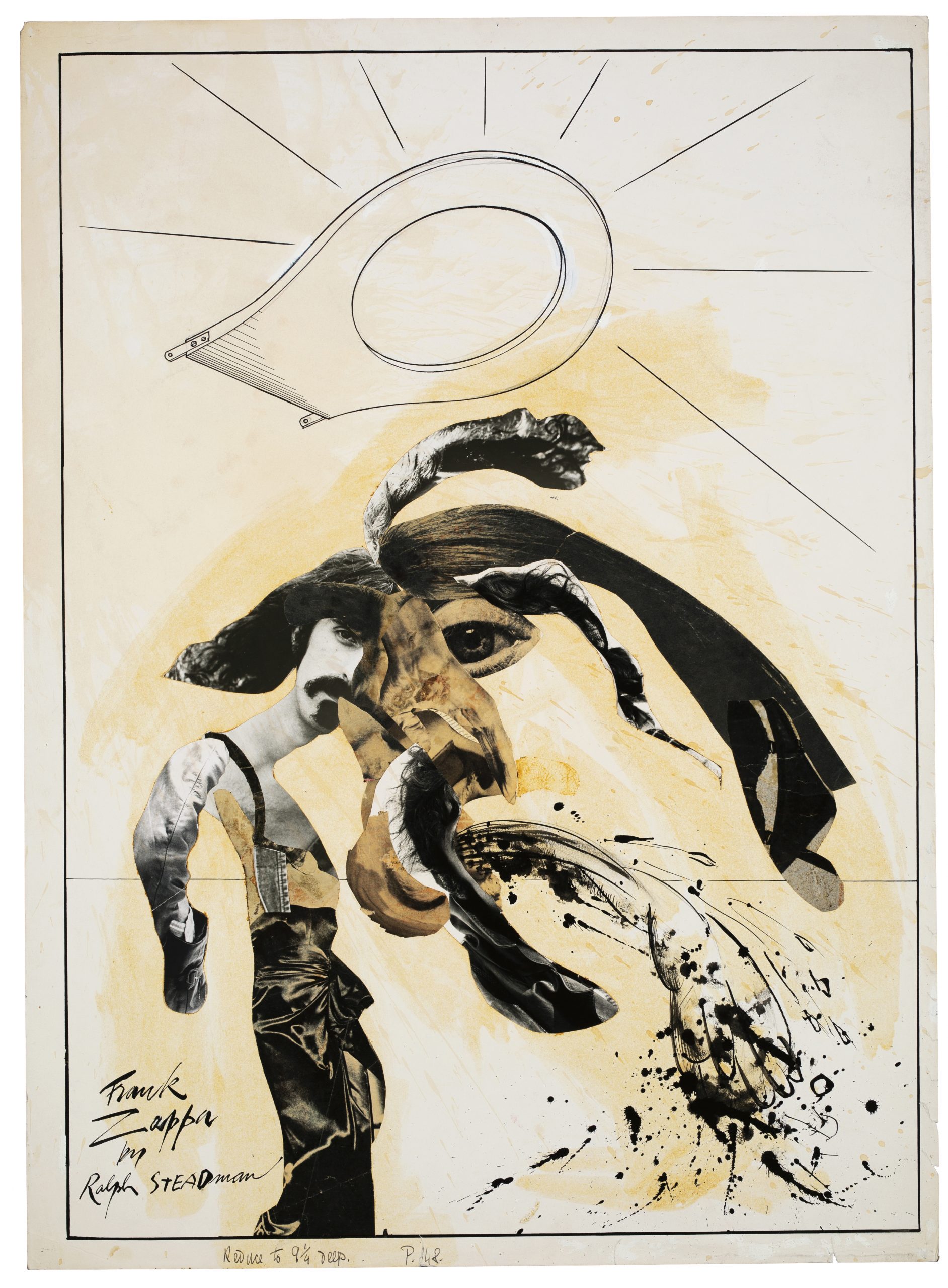 What is your most treasured memory? The children. 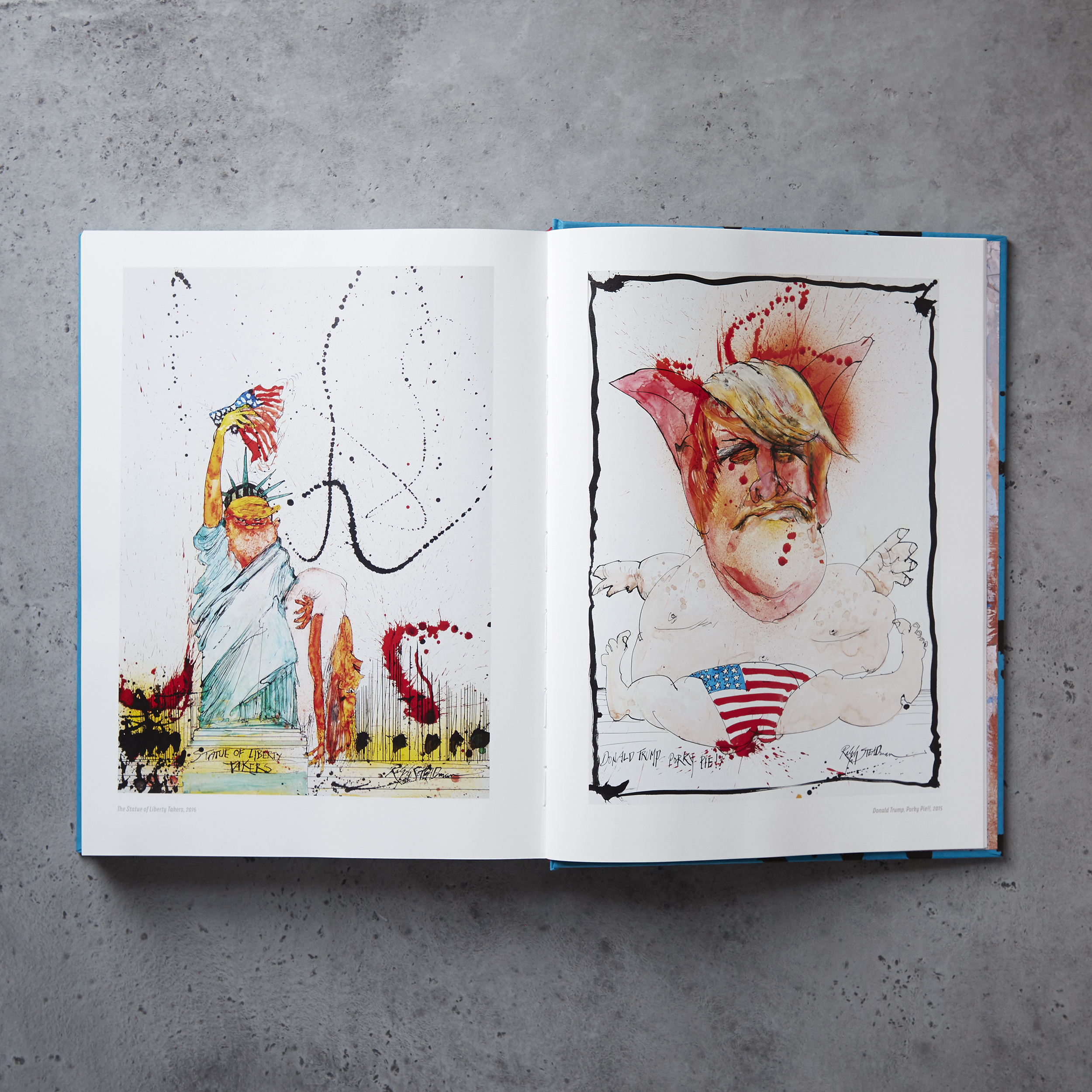 What makes you smile? The grandchildren.

What makes you cry? Losing my Mum and Dad who were really nice people.

What is your go-to drink when you toast to a sale? Viognier, white wine.

After an all-nighter, what’s your breakfast of champions? I don’t really do all-nighters. I like a boiled egg in the morning. 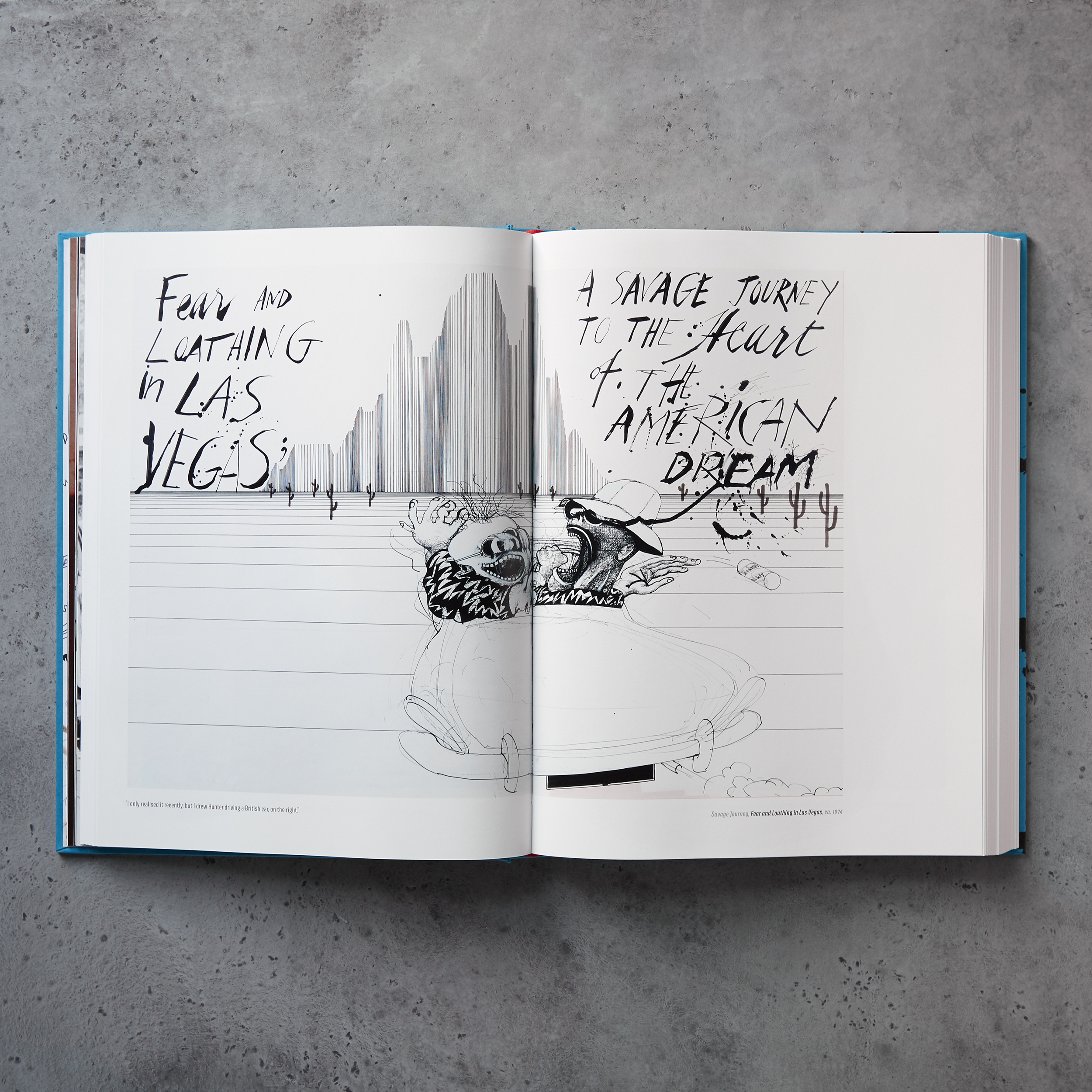 “I only realised it recently, but I drew Hunter driving a British car, on the right.” Savage Journey, Fear and Loathing in Las Vegas, ca. 1974

Who inspires you? Picasso, Marcel Duchamp.

What’s your best quality? I can still stand and walk.

What’s your biggest flaw? I used to shout a bit. 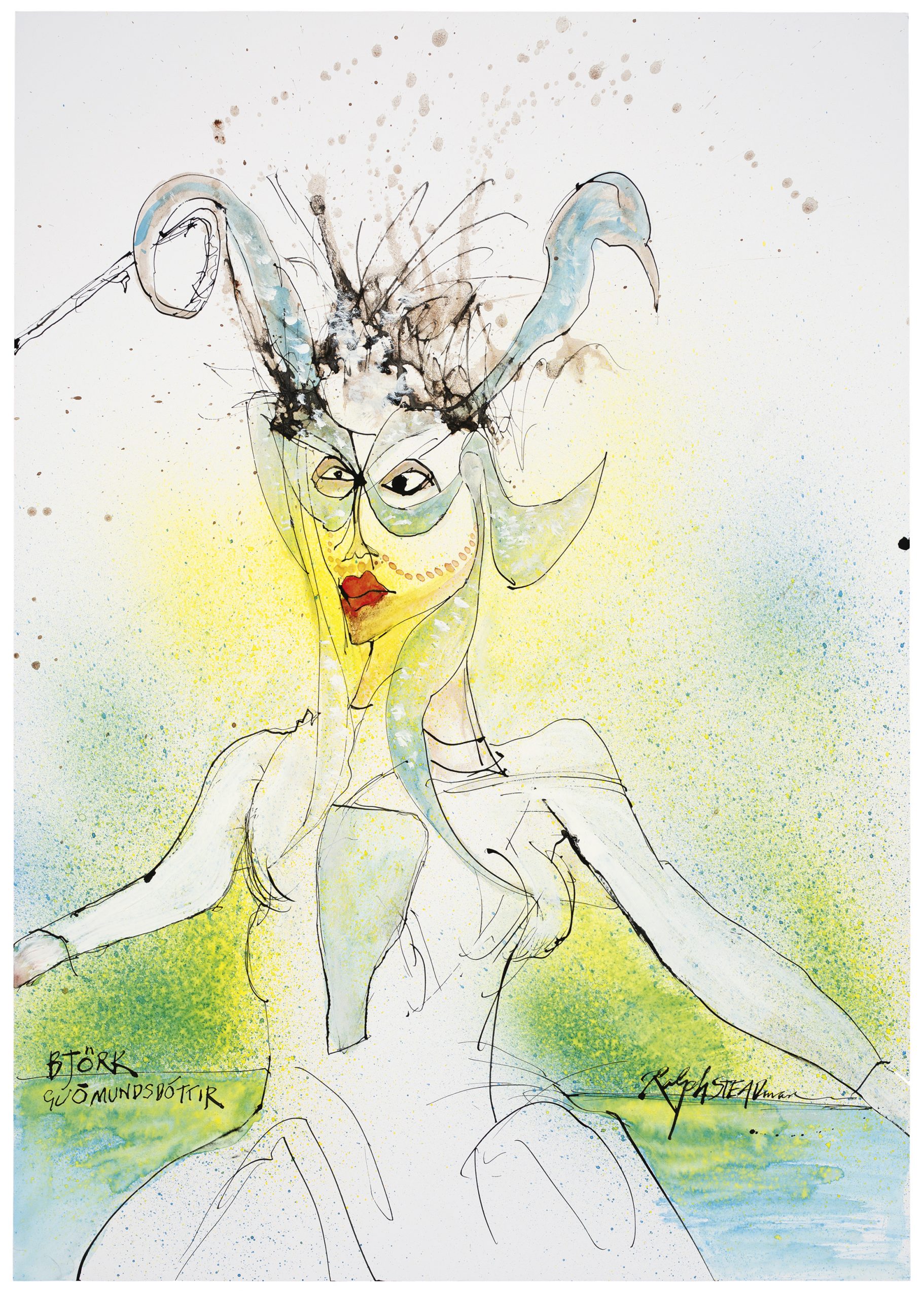 Bjork, created for Sonos for a store exhibition of original artworks, 2018

What is your current state of mind? Uncertain and apprehensive because of the wretched virus. 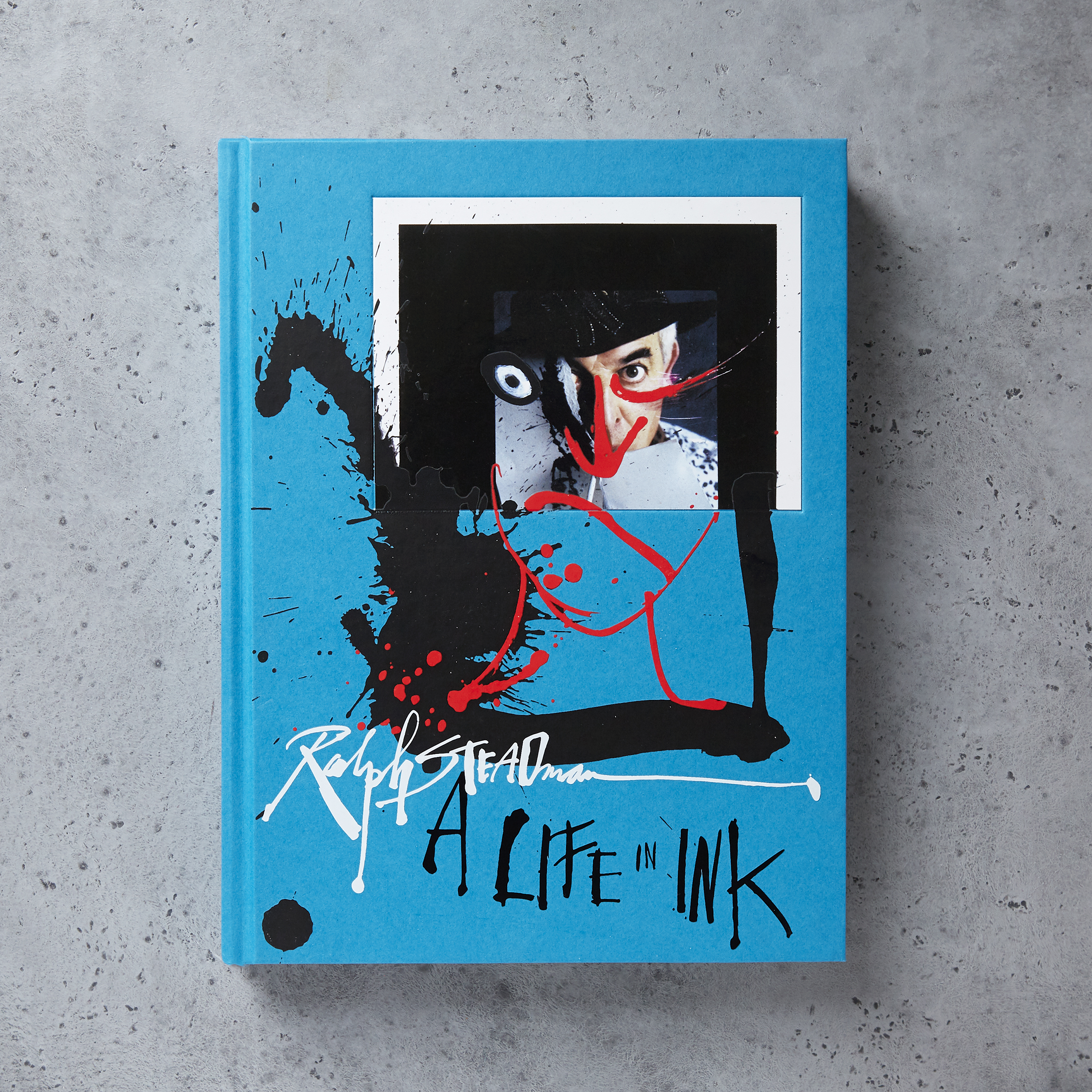 Cover, A Life in Ink

What do you consider your greatest achievement? The making of my books on Sigmund Freud, Leonardo da Vinci and The Big I Am about God.

If you were to die and come back as a person or thing, what would it be? A lavatory. It would be useful!

Cover image: Ralph in his London Studio; all images are from Ralph Steadman: A Life in Ink, published by Chronicle Chroma 2020

Victoria Looseleaf is an award-winning arts journalist who has been a regular contributor to the Los Angeles Times, the New York Times, KCET Artbound and other outlets. In addition, she covers arts festivals around the world, filing datelines from cultural hot spots that include Berlin, Venice and Abu Dhabi. Her feminist novella in verse, Isn’t It Rich? is being adapted for the stage and her children’s coffee table book, Russ & Iggy’s Art Alphabet, has recently been published.