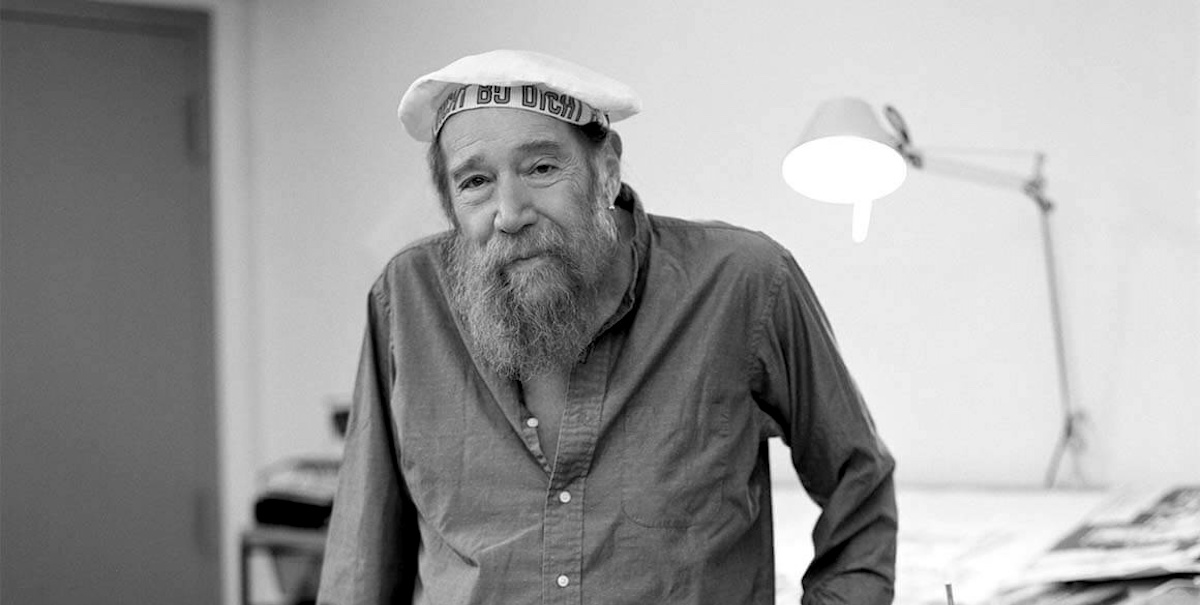 Lawrence Weiner, one of the leading godfathers of the Conceptual art movement, has died, age 79. Born February 10, 1942, he was one of the central figures in the formation of conceptual art in the 1960s. His work often took the form of typographic texts, a form of word art.

His gallery, Lisson put out the following statement, “An influential artist and a pioneer of his craft, Lawrence Weiner was the producer of numerous text-based works that manifested themselves as public works of art, slogans on walls, t-shirts and manhole covers; indeed, they could transform any surface imaginable. Better described as thought sculptures, Weiner defined his sculptural medium simply as ‘language + the material referred to,’ in the sense that language is a material for construction. Accordingly, his first book Statements (1968) contains 24 typewritten descriptions of works, where only a few had actually been made, suggesting that a work’s existence requires a readership rather than a physical presence.

Here is one example:

1. THE ARTIST MAY CONSTRUCT THE PIECE

2. THE PIECE MAY BE FABRICATED

3. THE PIECE NEED NOT BE BUILT

AS TO CONDITION RESTS WITH THE RECEIVER UPON THE OCCASION OF RECEIVERSHIP.

Before arriving at his immediately recognizable style of carefully composed word sculpture and his distinctive typeface, Weiner experimented with the media and materials of late minimalism, producing seminal works such as THE REMOVAL FROM THE LATHING OR SUPPORT WALL OR WALL BOARD FROM A WALL (1968) which he made for Lisson Gallery’s 1970 group exhibition, ‘The Wall Show’, curated by Nicholas Logsdail, as well as for ‘When Attitude Become Forms’, curated by Harald Szeeman.

Self-taught as an artist, his urgency to make art broadly available and engaging stems, he says, from his childhood in the South Bronx: “I didn’t have the advantage of a middle-class perspective. Art was something else; art was the notations on the wall, or the messages left by other people. I grew up in a city where I had read the walls; I still read the walls. I love to put work of mine out on the walls and let people read it. Some will remember it and then somebody else comes along and puts something else over it. It becomes archaeology rather than history.” (2013)

In a 2020 interview conducted with Kim Gordon for Interview Magazine, Weiner made profound statements on the definition, usefulness, and generative nature of art: “A lot of people were able to copy what I did, and that’s good. That’s what art is for. Art is for people to use… Art is people who saw the configuration and were not satisfied with it and went to change the configuration of the way we look at objects.”

A cause of death was not stated, although he said in a 2020 interview that he was in treatment for an unspecified form of cancer.

“We extend our deepest condolences to his family, especially his wife, Alice, and daughter, Kirsten”.