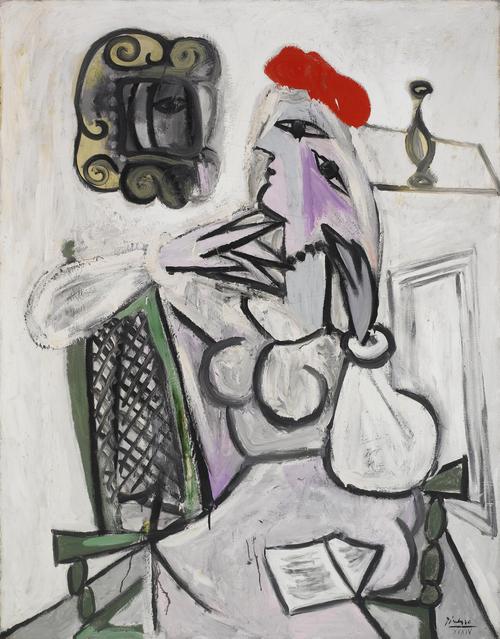 Comprised primarily of paintings and sculpture by 20th-century European and American artists, the gift includes major works by 17 artists, including Pablo Picasso, Georges Braque, Constantin Brancusi, Joan Miró, Philip Guston, Ellsworth Kelly, Andy Warhol and others. The works will be transferred to the museum at or before Mrs. Pulitzer’s death, as she chooses.

“Emily Pulitzer has few equals as a curator, board member and generous, public-spirited donor to the great civic and educational institutions in this country,” said Ms. Kim. “Perhaps the most extraordinary thing about this gift is its surpassing quality. These are all masterpieces, ranging from the early 20th-century Cubism of Braque to the late 20th-century Minimalism of Kelly and the Pop-Art of Warhol. These works are, by themselves, an art historical primer. They will become part of the Saint Louis Art Museum’s permanent collection and, joining other works given by the Pulitzer family, will cement this institution’s reputation as one of the premier art museums anywhere.”

Ms. Kim continued, “I am reminded of the statement by Professor Seymour Slive, the legendary director of Harvard University’s Fogg Art Museum, when he once told me that the only way to build a great public museum collection was to acquire great private collections. Emily Pulitzer is the living embodiment of that observation. The Saint Louis Art Museum will forever be in her debt.”

Other works in the gift will significantly reinforce existing areas of strength. Picasso’s “Woman in a Red Hat,” for example, will offer a valuable new addition to the museum’s group of works by this artist, while Georges Braque’s “The Mantelpiece” will provide a fascinating complement to Picasso’s “The Fireplace,” donated to the museum by Mr. Pulitzer in 1970.

In addition to European works, the Pulitzer gift will have a major impact on the museum’s collection of post-war American art. Andy Warhol’s “Self Portrait,” Philip Guston’s “Dark Room” and Ellsworth Kelly’s “Untitled” will all be highly important additions, as will more recent works such as sculpture by Rachel Harrison and Gedi Sibony.

Mrs. Pulitzer said, “As an encyclopedic museum, the Saint Louis Art Museum plays a unique role in the lives of St. Louis residents, illuminating art from a great variety of places and historical eras. I am delighted to enrich the museum’s collection of modern and contemporary art with this gift and look forward to seeing it resonate with other works in the museum’s diverse collections.”

“This gift will strengthen our collection of art from many eras and cultures, and continue to position our Museum as both a cultural center for our community and an institution of global significance.”

Joseph Pulitzer Jr. established himself as a discerning collector as a young man when he purchased Amedeo Modigliani’s “Elvira Resting at a Table” and hung it in his dormitory room at Harvard University. In 1939 he purchased Henri Matisse’s “Bathers with a Turtle,” widely considered to be one of the great masterpieces of early 20th-century art. The Matisse is among the 76 works of art that Joseph and Louise Pulitzer gave to the museum from 1947 to 1967; the Modigliani was given to the museum in 1968 in her memory.

Originally from Cincinnati, Emily Rauh Pulitzer received a bachelor’s degree in the history of art from Bryn Mawr College and a master’s degree from Harvard University. She served as assistant curator of drawings at the Fogg Art Museum—part of the Harvard Art Museums—before moving to St. Louis in 1964 to work as the curator of the Saint Louis Art Museum (then known as the City Art Museum). Under her leadership, the museum embraced contemporary art and began strategically collecting and exhibiting works by living artists. A highlight of her curatorship was the influential sculpture exhibition “7 for 67” (1967), which introduced museum visitors to a generation of artists, including Christo, Mark di Suvero, Donald Judd, Claes Oldenburg, Lucas Samaras, George Segal and Ernest Trova.

She married Joseph Pulitzer Jr. in 1973, and the couple continued to support the museum through the gifts of 49 additional works of art. Among these are paintings such as “Rocks at Belle-Isle, Port-Domois” by Claude Monet (given in 1975), “White and Hot” by Barnett Newman (given in 1980), and “Curtains” by Roy Lichtenstein (given in 1985). The couple’s gifts to the museum also included prints and drawings—including the drawing “Fishing Boats at Saintes-Maries-de-la-Mer” by Vincent van Gogh—as well as a Mayan vessel and Native American textiles.

After Joseph Pulitzer’s death, in 1993, Emily Pulitzer continued to support the museum, including through gifts of art such as the 2001 partial and promised gift of Jackson Pollock’s “Number 3, 1950.” She helped to fund significant art acquisitions, including the 2002 purchase of a collection of 382 Max Beckmann prints and the 2006 acquisition of Julie Mehretu’s “Grey Space (distractor).” Mrs. Pulitzer also made a significant leadership gift to the Campaign for the Saint Louis Art Museum, which funded the construction of the museum’s David Chipperfield-designed East Building.