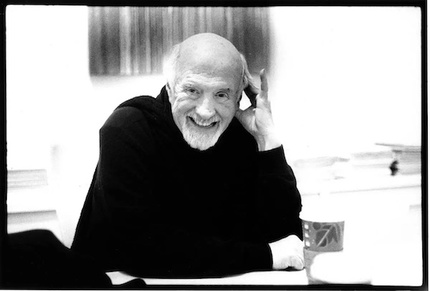 Art critic Dave Hickey, known for his sharp wit and brash writing, died at his home in Santa Fe, New Mexico, of heart disease November 12 at the age of eighty-two. Lauded in The Guardian as “the Rhonda Rousey of criticism,” Hickey, who famously asserted that “the title of artist has to be earned,” stood out in his chosen field for his unalloyed appreciation for the highbrow and the gutter-dwelling, which he often addressed together in essays that startled in their honesty and in the breadth of knowledge evoked therein.

Born in 1938 in Fort Worth, Texas, to a jazz musician father and a painter mother, neither of whom enjoyed a successful career in their chosen artistic field, Hickey spent his youthful years traveling from state to state as his father looked for work at warehouses and car dealerships before committing suicide when the future critic was still a child. Following a stint living with his grandparents, Hickey enrolled in Texas Christian University, graduating in 1961 and going on to earn his MA from the University of Texas in 1963, then briefly ran his own gallery—named A Clean, Well Lighted Place, after the Ernest Hemingway story—in Austin in 1967. In 1971, he moved to New York, where he took a job as executive editor of Art in America and began writing extensively for publications including Artforum, Interview, the Los Angeles Times, the New York Times, Rolling Stone, Vanity Fair, and the Village Voice. He published a number of books over the course of his career, including 1993’s The Invisible Dragon: Four Essays on Beauty, which unpopularly posited beauty in art as essential, and 1997’s Air Guitar: Essays on Art and Democracy, pronounced “often perfect” by Greil Marcus in the pages of Artforum. Both volumes earned him widespread acclaim. In recent years, he published Wasted Words and Dust Bunnies (both 2014), which together collected more than three thousand comments he made on Facebook and the responses they engendered, and 25 Women: Essays on Their Art (2015), meant to dispel the popular notion that he only wrote about the work of men. The biography Far from Respectable: Dave Hickey and His Art, by Daniel Oppenheimer, was published earlier this year.

Regardless of the subject he was covering, Hickey was an avowed supporter of clear prose that could be understood by almost anyone. He was resolute in his stance against academicization and artspeak, viewing both as means of closing off art to the masses. Contra many established voices in the art world then and now, Hickey believed that the arts were for all. “The justification for [a] pretense to engagement,” he wrote in Air Guitar, “derives from our Victorian habit of marginalizing the experience of art, of treating it as if it were somehow ‘special’. . . . All we do by ignoring the live effects of art is suppress the fact that these experiences, in one way or another, inform our every waking hour.”

Beginning in the 1990s, Hickey worked as a professor, first at the University of Nevada, Las Vegas, where he taught for two decades, and then at the University of New Mexico, Santa Fe, from which he retired seven years ago. “I think he would primarily want to be remembered as a teacher. He loved his students,” Hickey’s wife Libby Lumpkin told the Las Vegas Review-Journal. Hickey’s own wishes regarding his posthumous stature might also be gleaned from his 2016 conversation with The Guardian. Asked if he had anything further to add at the interview’s conclusion, Hickey was succinct: “Don’t make me look like an asshole.”