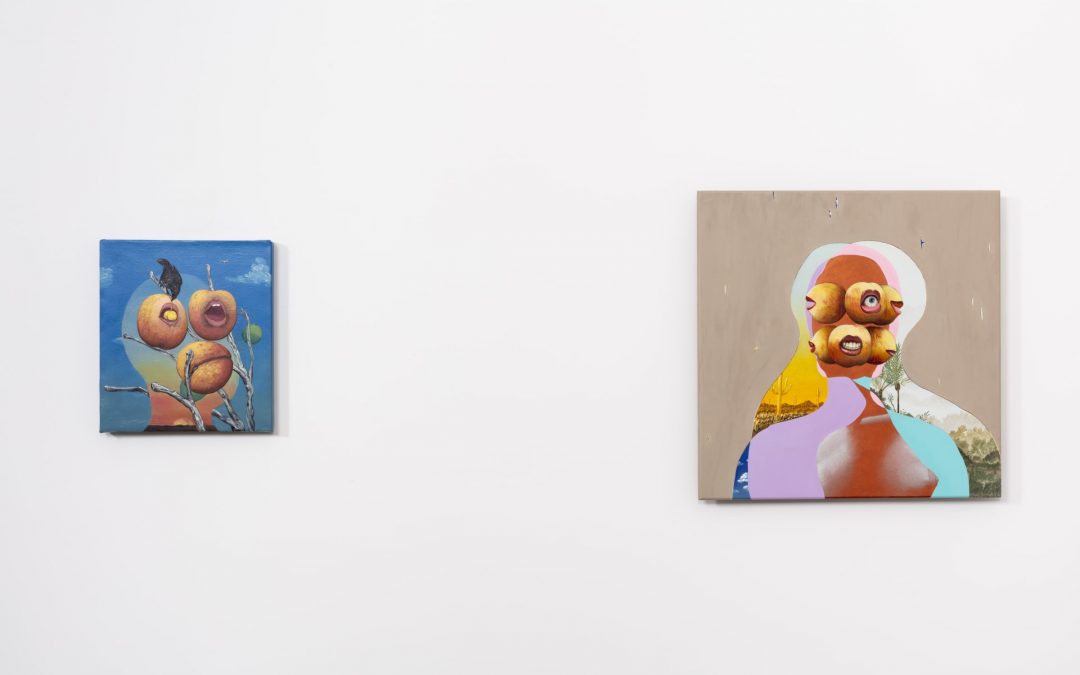 At Make Room Gallery in Los Angeles, objects and surfaces collide to create dimensional realms through an eye-catching mixed-media experience by Miguel Angel Payano Jr. Born in New York City to Dominican immigrants and adopted into a Beijing-based home, Payano’s tri-lingual influences, including Spanish, English and Chinese, have shaped his unique artistic expression. In his West Coast solo debut Elusive Nature, the device of symbology is used to elegantly fuse and dissect cultural identities. All created in 2021, many of Payano’s surfaces are smoothly rendered in oil and acrylic, while others incorporate dramatic 3D elements that captivate the viewer. With references to transnationalism made apparent through figurative forms encompassing a “triple-consciousness,” the quest for universal understanding is underway, either solitarily or collectively. 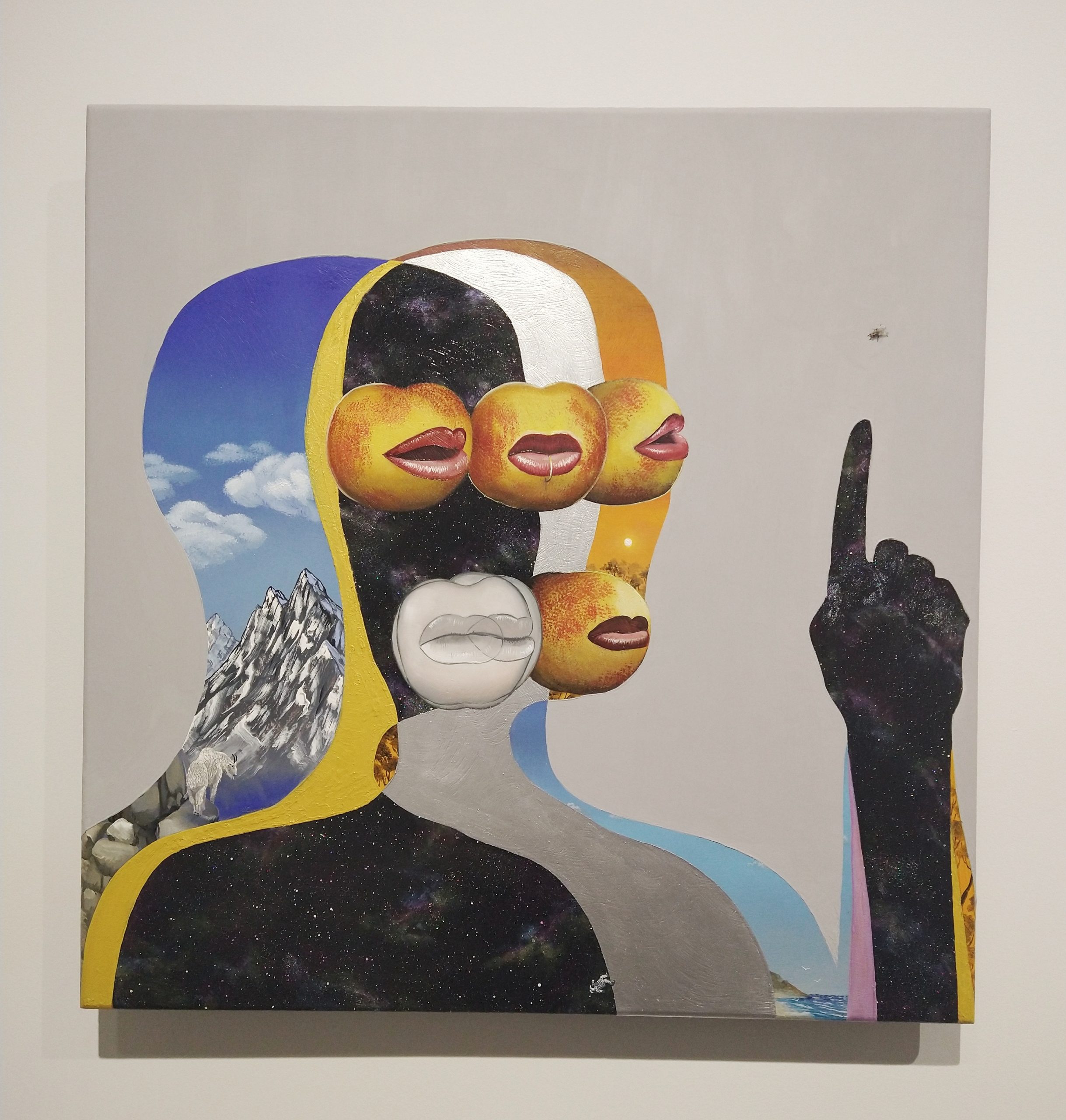 In pursuit of a consensus on the nature of reality, the artist makes use of family narratives that often portray parent and child or many expressive mouths in peach form. This dialogue extends into surrounding landscapes in which the human element becomes less distinct and backgrounds morph into foregrounds. One such example is seen in Three Heads: Misdirect AKA G.O.A.T. Here, a figure is composed of overlapping outlines that symbolize different realms. These outlines begin with an Earth scene of distant mountains and wispy clouds, succeeded by the dark nebulous cosmos, an orangy, Martian-like atmosphere, and finally, an obscure grey. 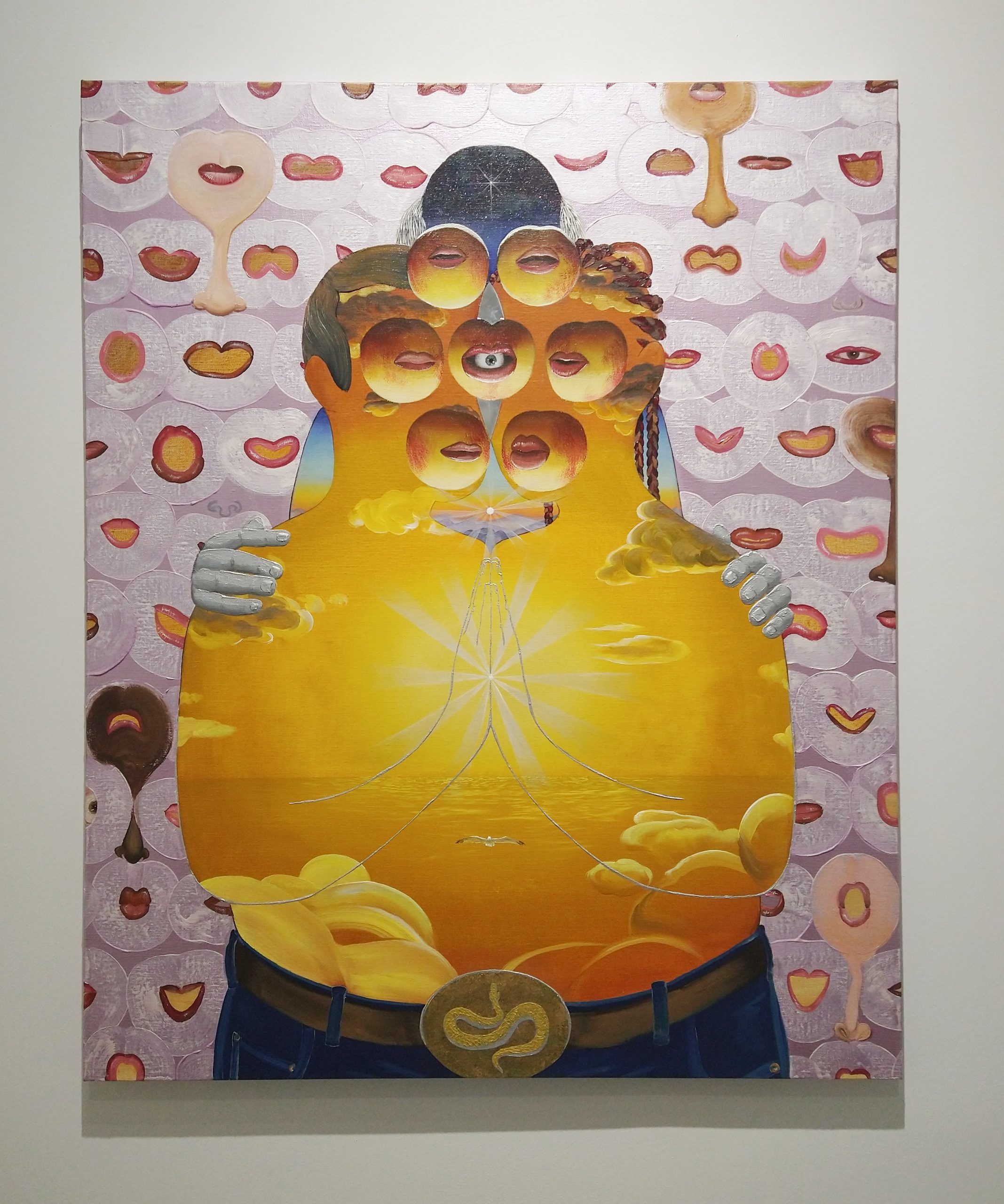 Good Union AKA The Cyclops

The figure’s face is undefined except for the eye and mouth areas, wherein Payano has placed a slew of juicy peaches adorned with their own set of enticed maws. The overarching figure, whose finger points upward towards a lone fly, perhaps contemplates more than its identity within the Earth’s domain, but also human significance within the vast and mysterious universe. 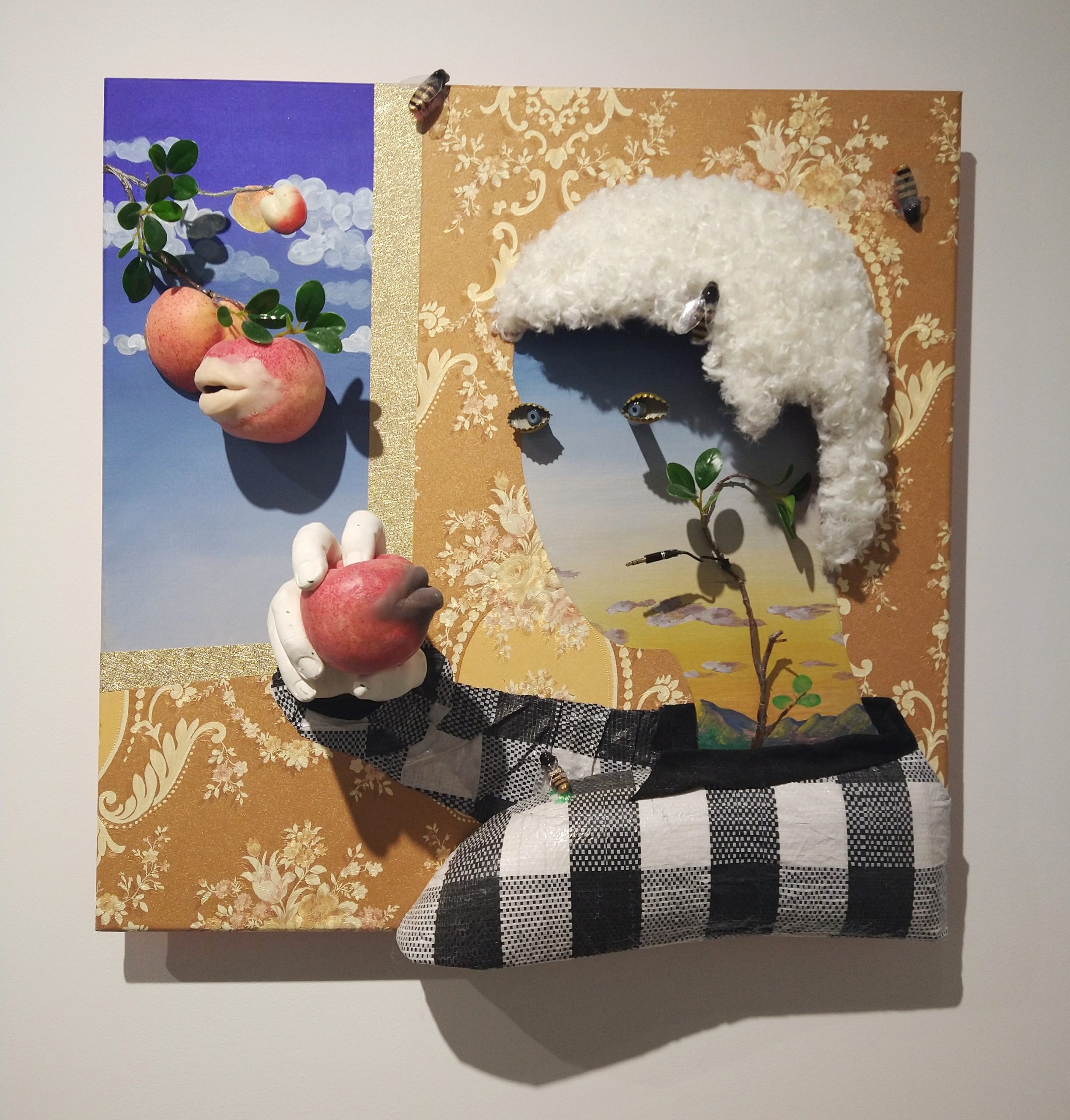 Good Union AKA Cyclops shows three forms: male, female, and cosmic elder, combined to create a single unit. Through this union, the transcendence into an evolved plane of consciousness appears to have taken place. With hands joined in prayer, the torso’s interior radiates the ethereal golden light of a rising sun. Hovering within the upper collective mind are more peach mouths that surround an all-seeing, resolute cyclops eye, while the background is strewn with clusters of foreign chops prattling off into the distance. 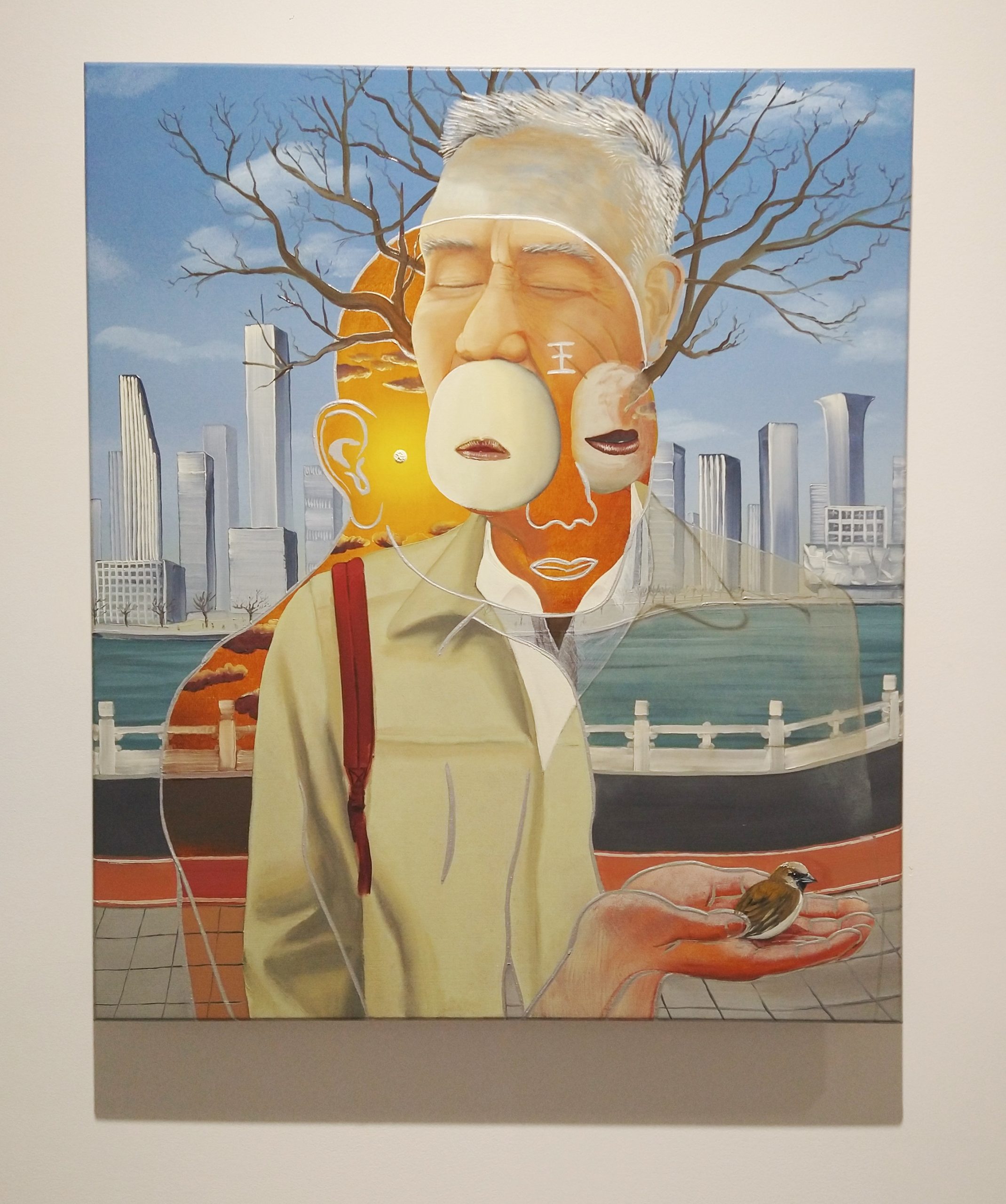 Xiao-Hu, A Bit of the Bun AKA Grandfather’s Words

Payano’s skill of fusing smooth and dimensional surfaces is distinct in his mixed-media wall piece Enchanté. A figure stares straight ahead at the viewer with crushed bottlecap eyes on an empty, blackened face that’s surrounded by faux shaggy hair. The character’s jacket, made from paper textures, is undone to reveal a smooth ocean scene and centralized tree, whose leaves and twigs jut forward. Below, a pair of life-like, porcelain hands extend convex, rosy peaches, enlivened with clay and ripe for the plucking. 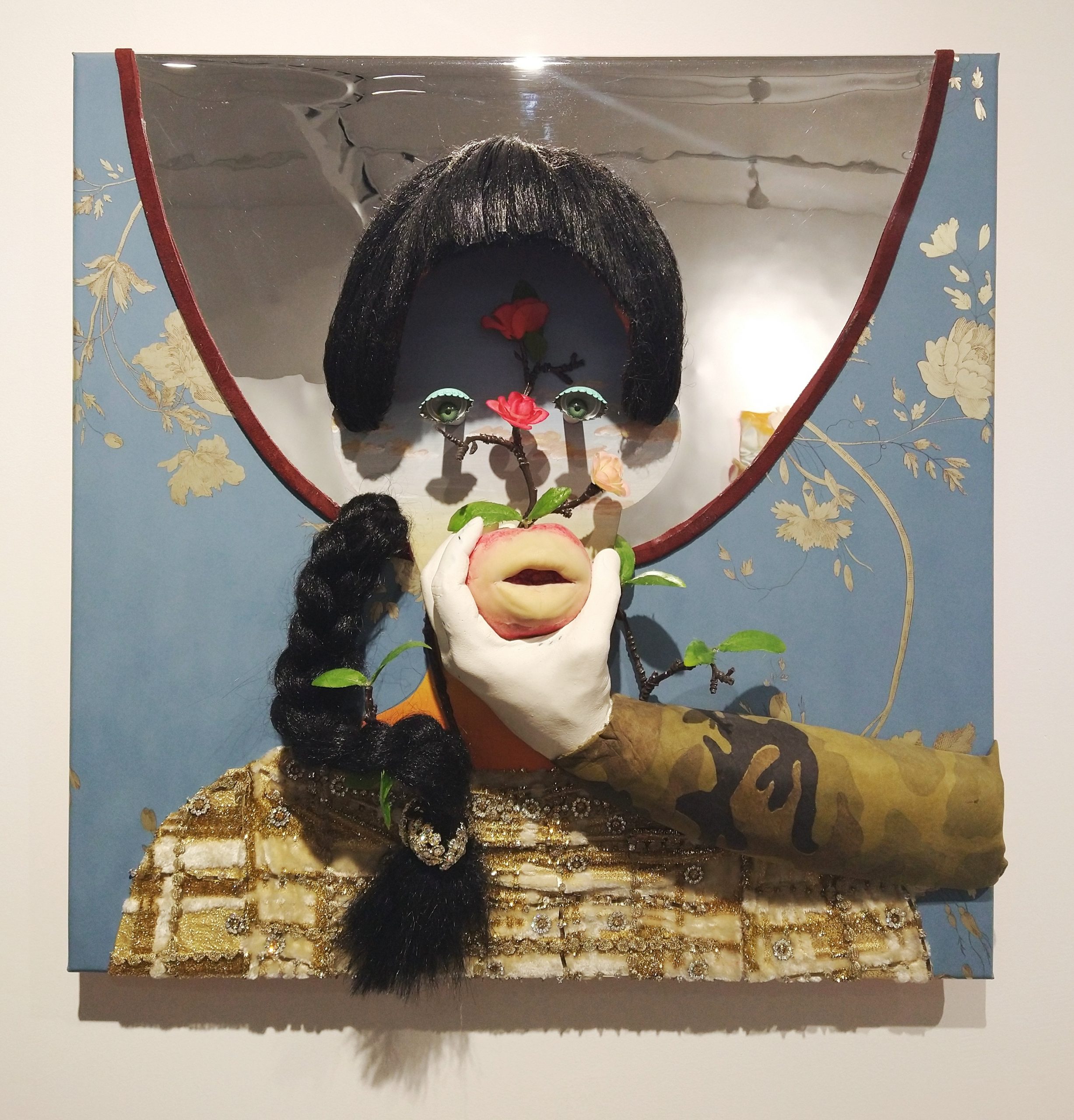 With numerous details and layers to assimilate in Payano’s art – all requiring sensitive examination – his unique brand of surrealism, albeit one replete with subtle components,  finally provides crucial clues to the intended messages, if, that is, they aren’t lost.

Zara Kand is an artist, art writer and curator based in Joshua Tree, CA. She is also the editor of the Gallerist Speaks, an international interview series focusing on gallery directors, curators and arts organizers. For more information, please visit the author’s website here.