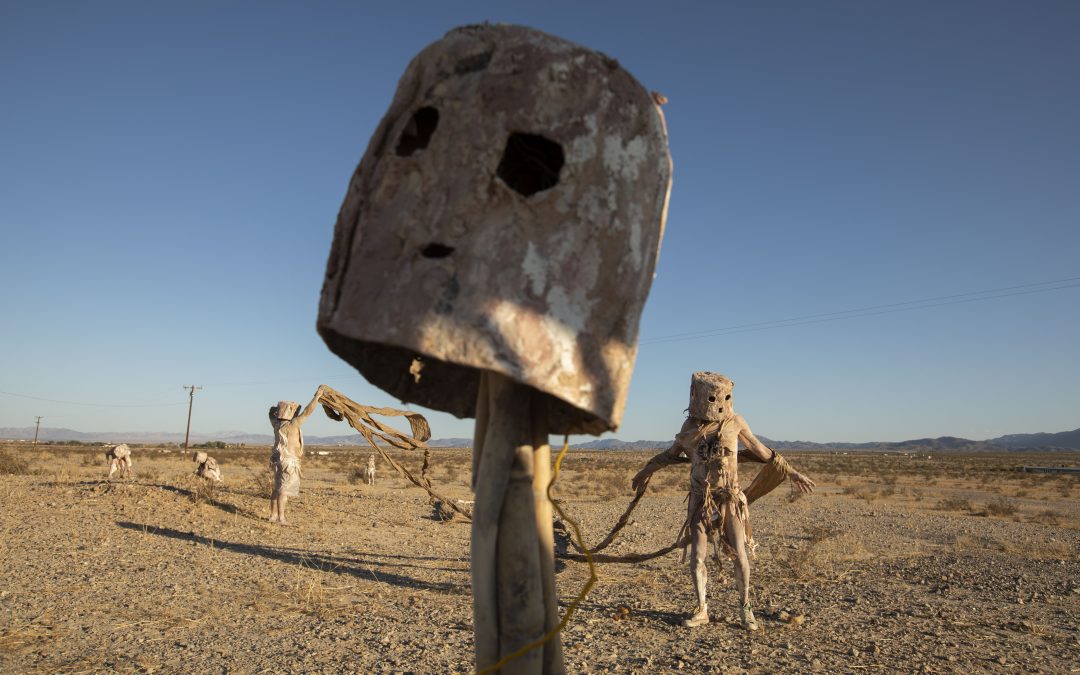 As autumn sweeps through the mountainous Hi-Desert, the wind-blown trails are accentuated by region-specific artworks: The Hwy 62 Open Studio Art Tours is an annual celebration of artists residing within the Morongo Basin. From the Morongo Valley to the remote stretches of Wonder Valley, these desert dwellers open their home studios to the public every October in order to showcase and sell works, offering intimate glimpses into their creative processes.

For ease of route planning, visitors are provided with catalogues that include a directory of participating artists, as well as maps marked with studio locations. Begun by a handful of 29 Palms’ artists in 2001, the Art Tours is now in its 20thyear and has grown to include several hundred makers. Although the participants spend the greater part of a year preparing for these short-lived weekends, the tours tend to attract thousands of visitors and potential collectors, making it well worth their efforts. 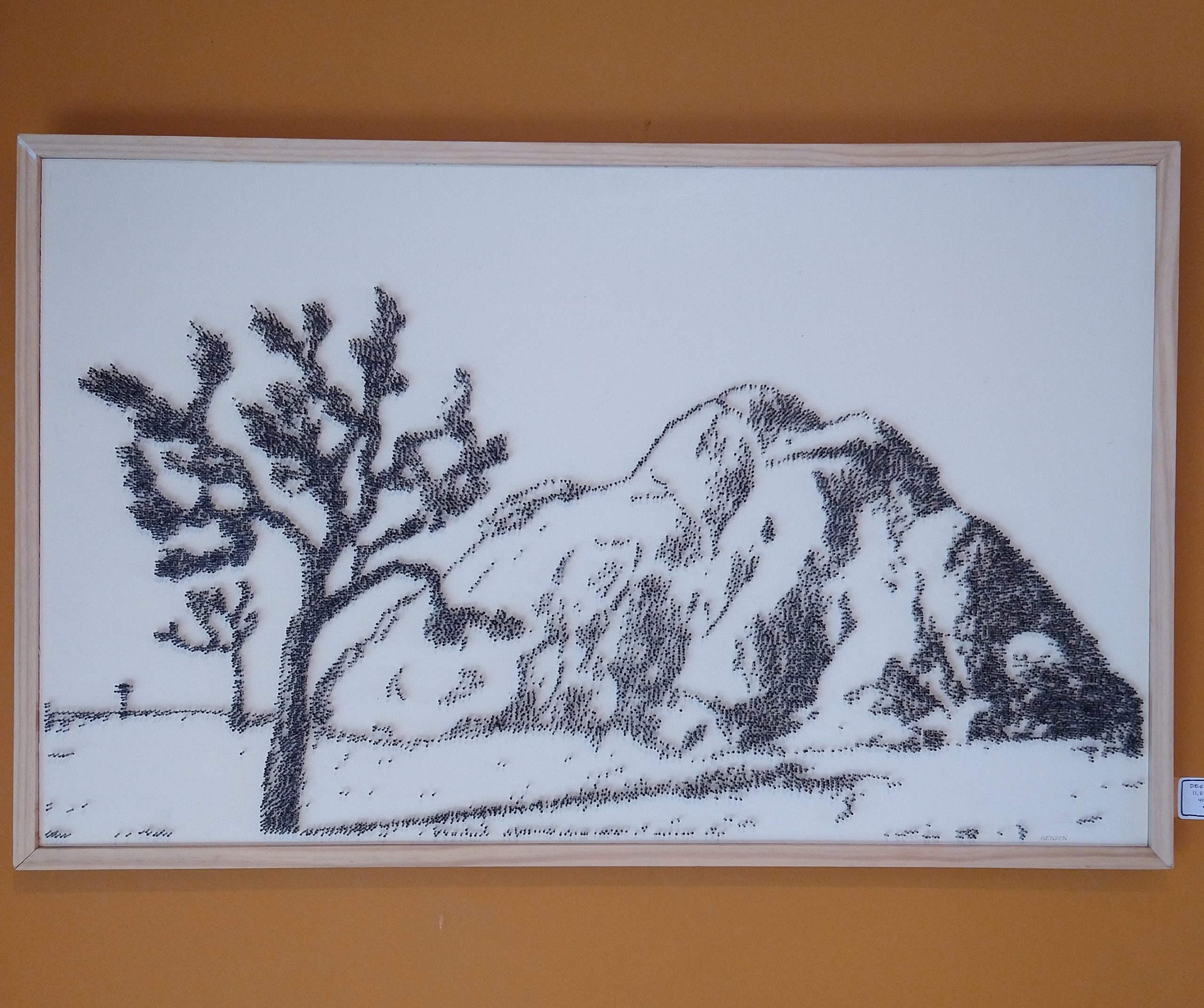 During the event’s first weekend, a curiously mesmerizing event took place at the Scranch studio in Wonder Valley. Spectators from near and far convened – literally – in the middle of nowhere. The occasion?  A performance by the primitive, neo-Dadaist group known as The L.A. Mudpeople, a troupe of Los Angeles performance artists founded and led by Mike M. Mollett more than a quarter century ago. 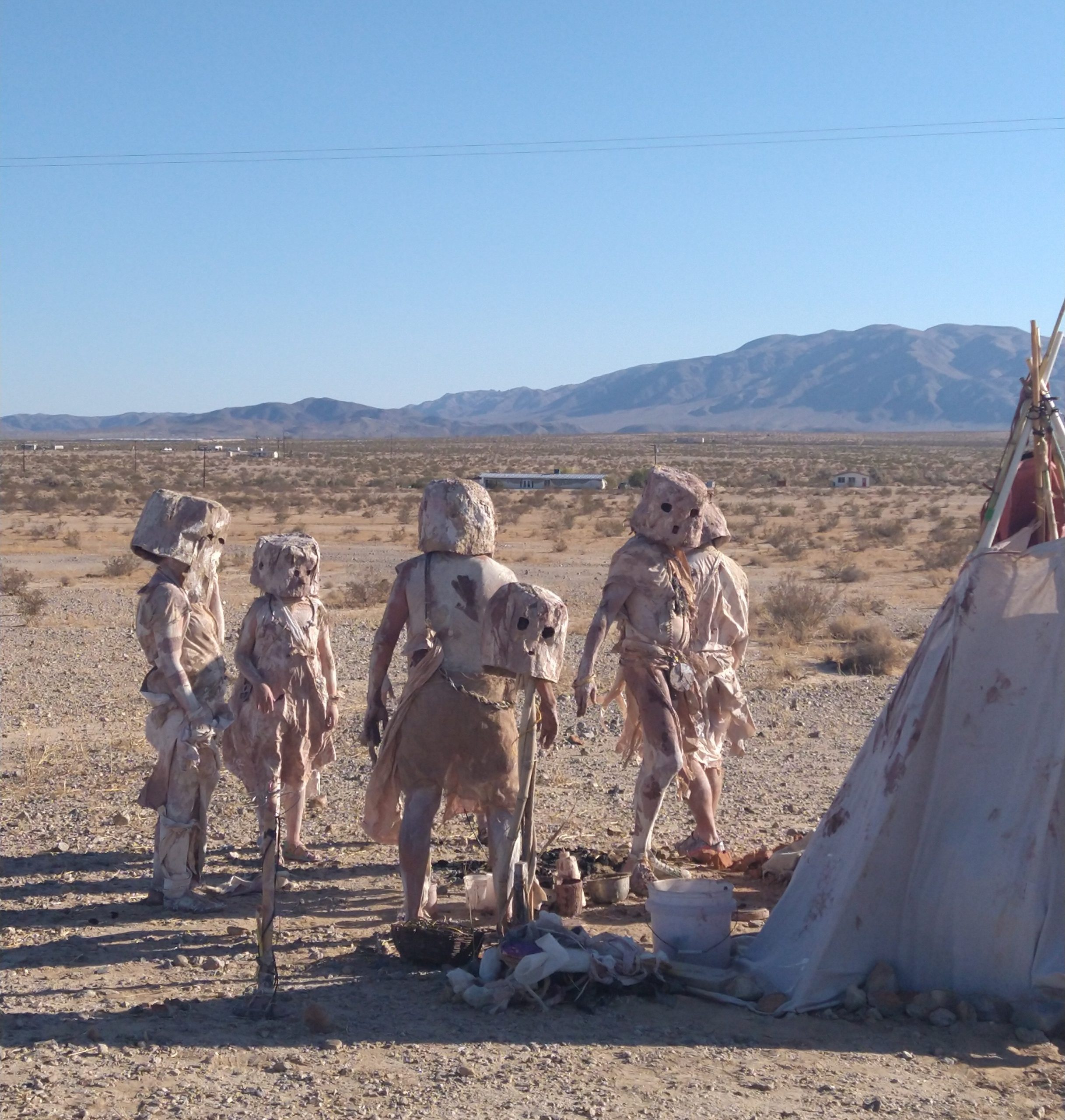 Indeed, the Mudpeople seemed to have emerged straight from the desert’s own rocky bowels. Scantily clad in tattered cloths that blended into the sun-bleached landscape, the troupe was a magnet for perplexed bystanders who happened to gaze upon the six performers. Communicating, ever so slowly, through a Tai-chi like language, the sextet’s naïve, timeless movements seemed to mimic the afternoon breeze as a novel way of connecting with the desert environment. 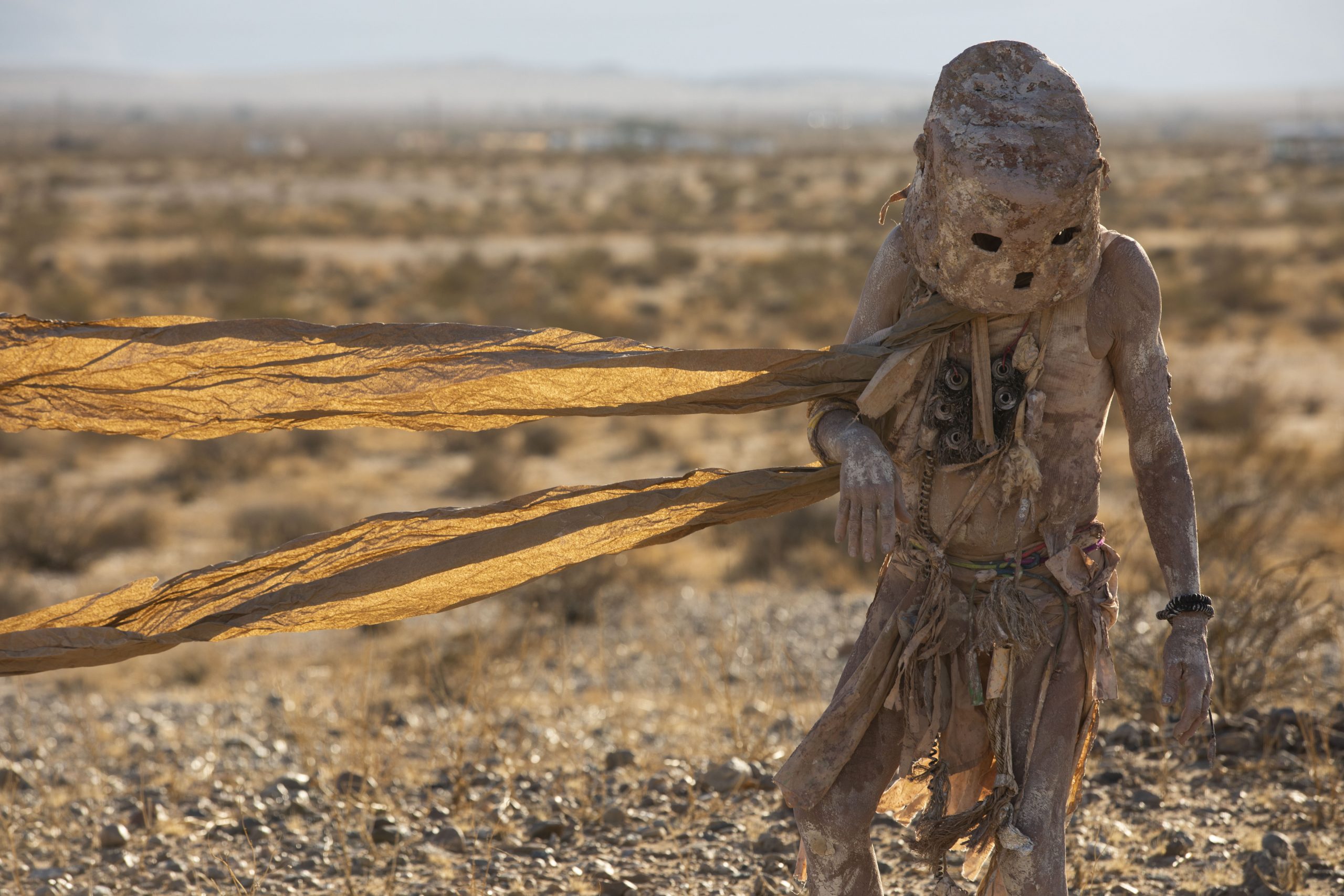 Incidental props included a ramshackle teepee installation, around which a giant ball, made of cloth, was rolled, its layers unraveled across the sand. Peering out of rock-shaped mudheads, the crude clan functioned within an insular vortex in which the surrounding audience played no part whatsoever. Like little specks amid a barren landscape under an infinite cerulean sky, the  Mudpeople seemed to have been borne out of a moment from a foreign era into a foreign land. 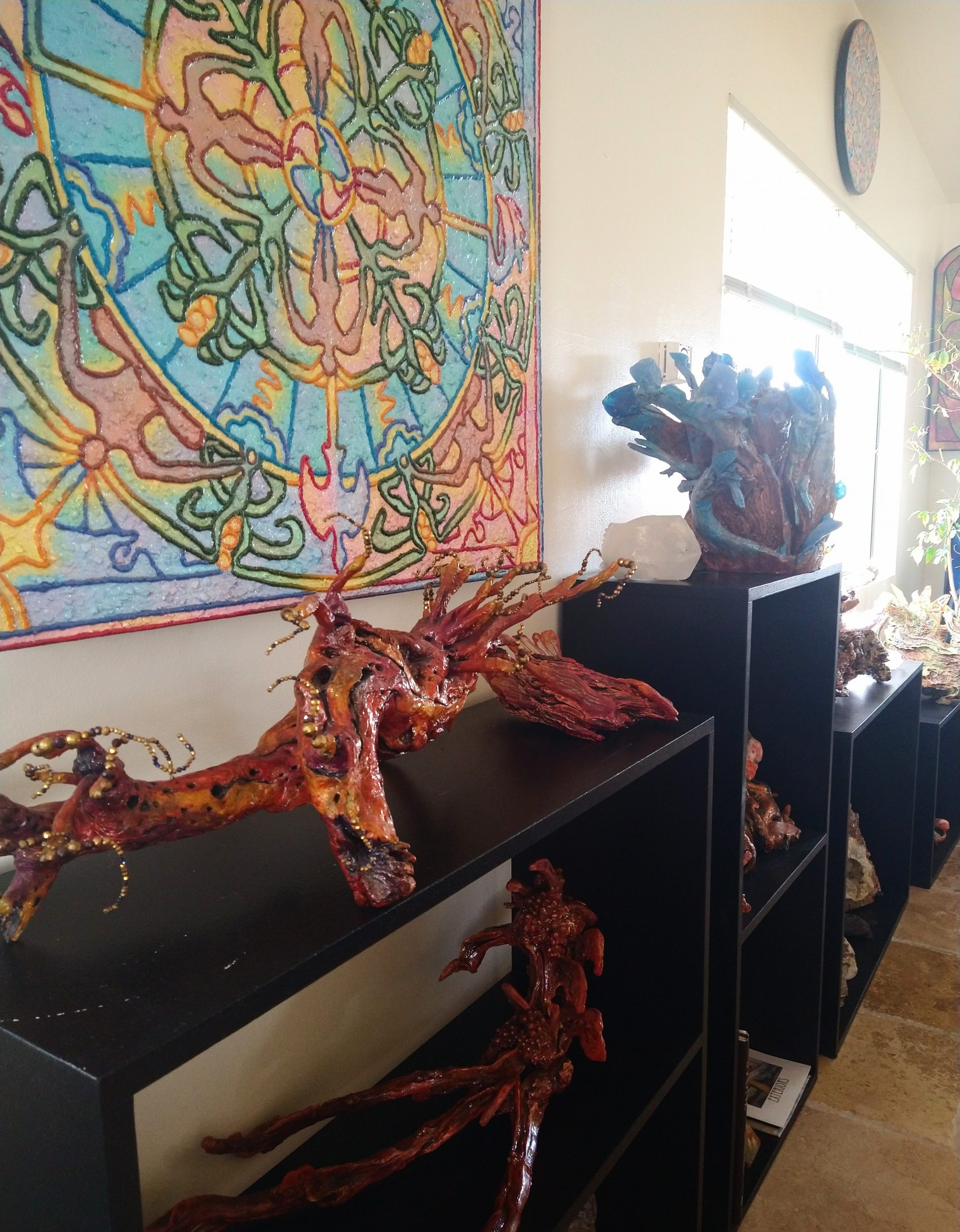 In nearby Yucca Valley, iridescent cobblestones led to the entrance of an enchanting fantasyland for adults imagined by artist Valerie Davis. Her cave-like domain brimmed with hypnotic mandalas, Selenite wands, and alien-esque sculptures, which Davis calls Planimerals. These oozing, shimmery sculptures, made from both organic and inorganic materials, evoke transcendental beings with an “evolved consciousness.” Spawned from decayed tree stumps, the creatures’ apertures burst with gleaming gemstones. Also on display was a large wall-hung mandala, textured with crumpled tissue and acrylic, representing an Earth goddess and her cyclical connection to animal spirits. If stared at for a spell, its perfectly symmetrical forms created the optical illusion of rotation. 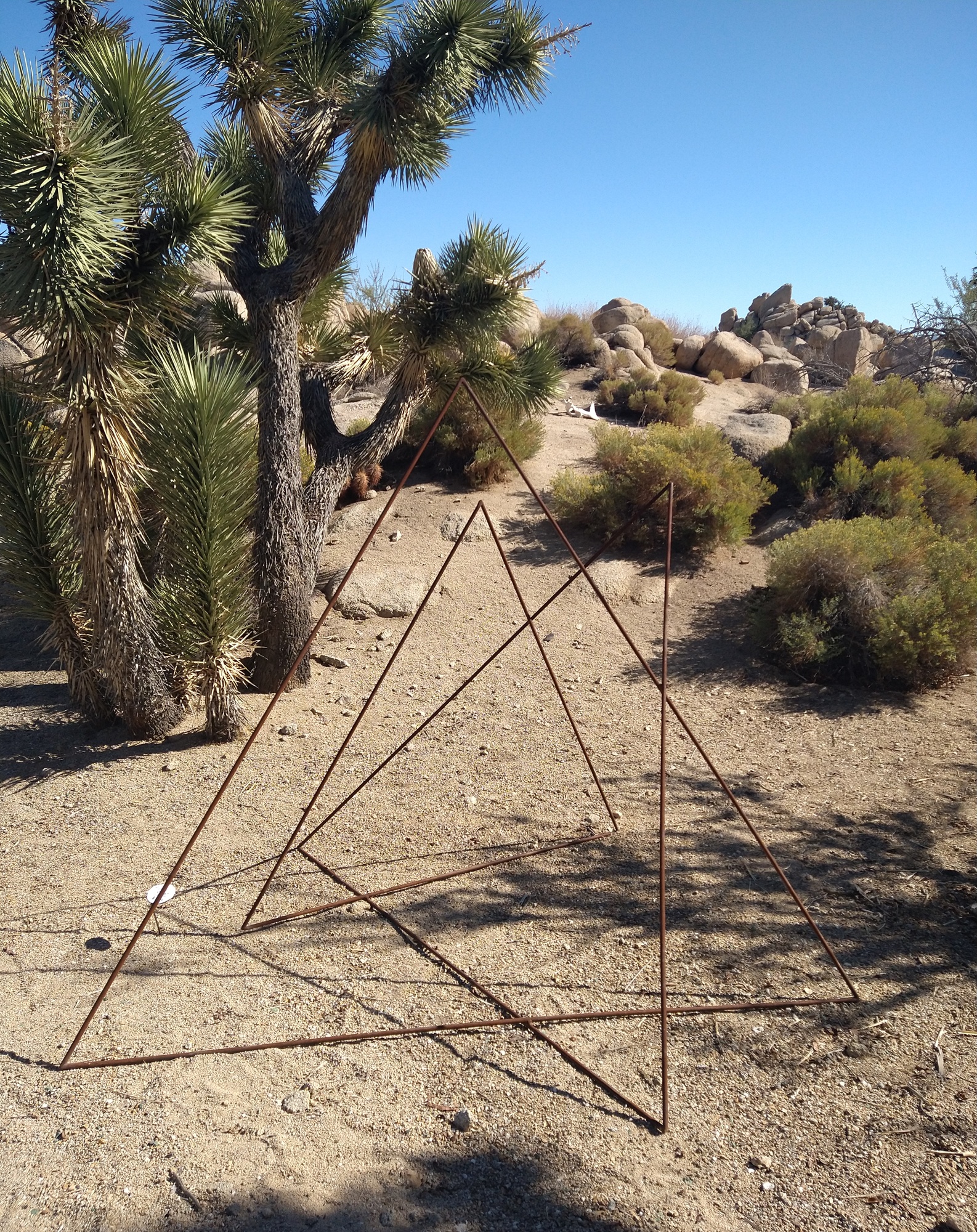 Another Yucca Valley studio, Sweet Rock Ranch, was home to several artists, including Gubby Beck and John Henson. Beck, a seasoned welder, plays with the shadows and angles of shapes to create both small and life-size geometric sculptures. Her process is free flowing, beginning with steel rods that eventually morph into rusted pyramidic and tribal shapes. Beck’s interpretation of the scorpion, composed of arcs that spiral upward into tails, cast ambiguous shadows across the sandy ground. 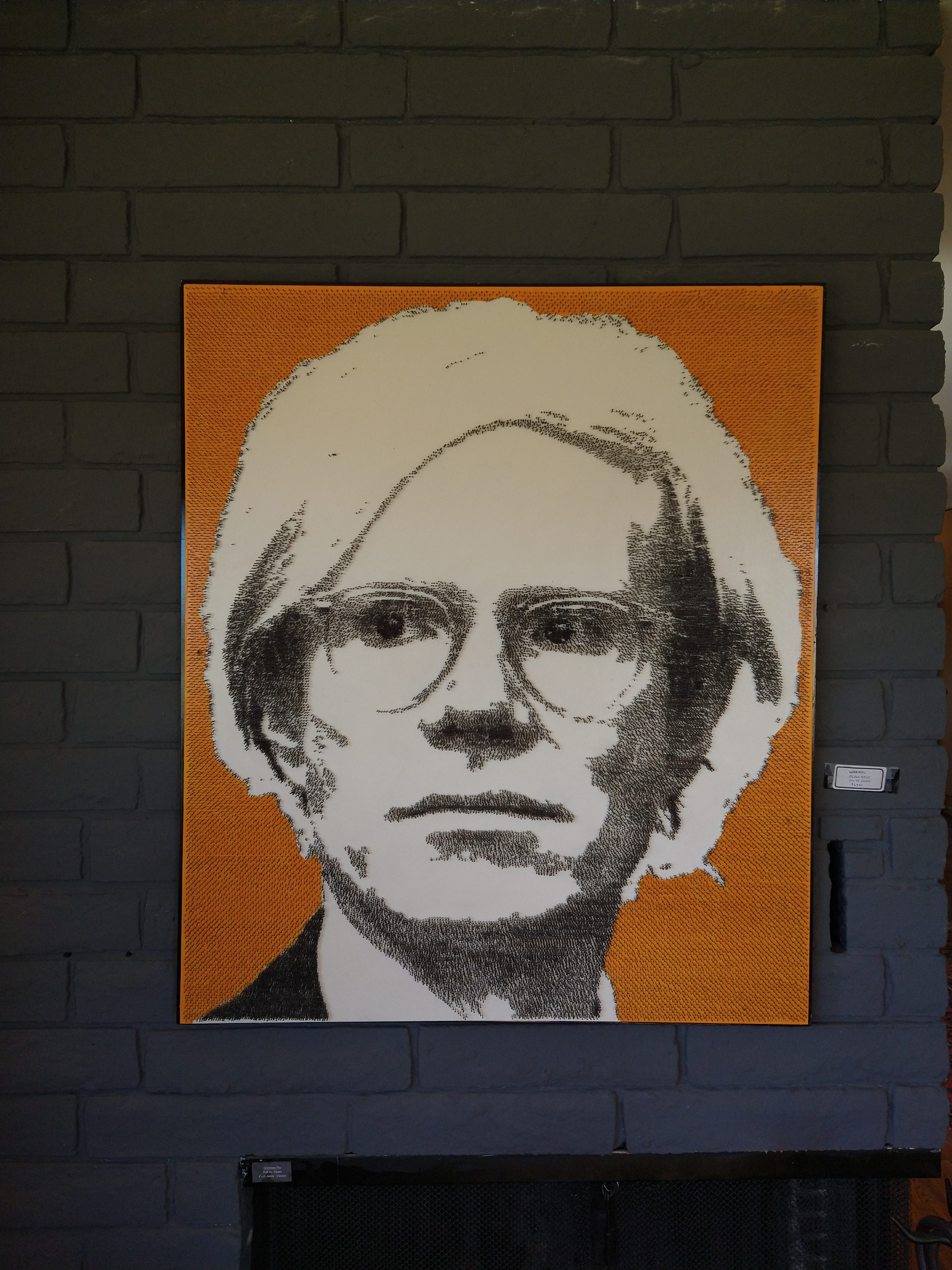 Perusing various studios in the Art Tours gives one an indelible impression of the artistic diversity that teems throughout the Hi-Desert, the Mojave’s resounding influence over its creators also apparent. This unique community spirit, with artists of various practices able to share space together, is only made possible by virtue of a smaller population.

Cover image: The L.A. Mudpeople, photo by Matt Gush; all images courtesy of the author unless otherwise noted.

Zara Kand is an artist, art writer and curator based in Joshua Tree, CA. She is also the editor of the Gallerist Speaks, an international interview series focusing on gallery directors, curators and arts organizers. For more information, please visit the author’s website here.