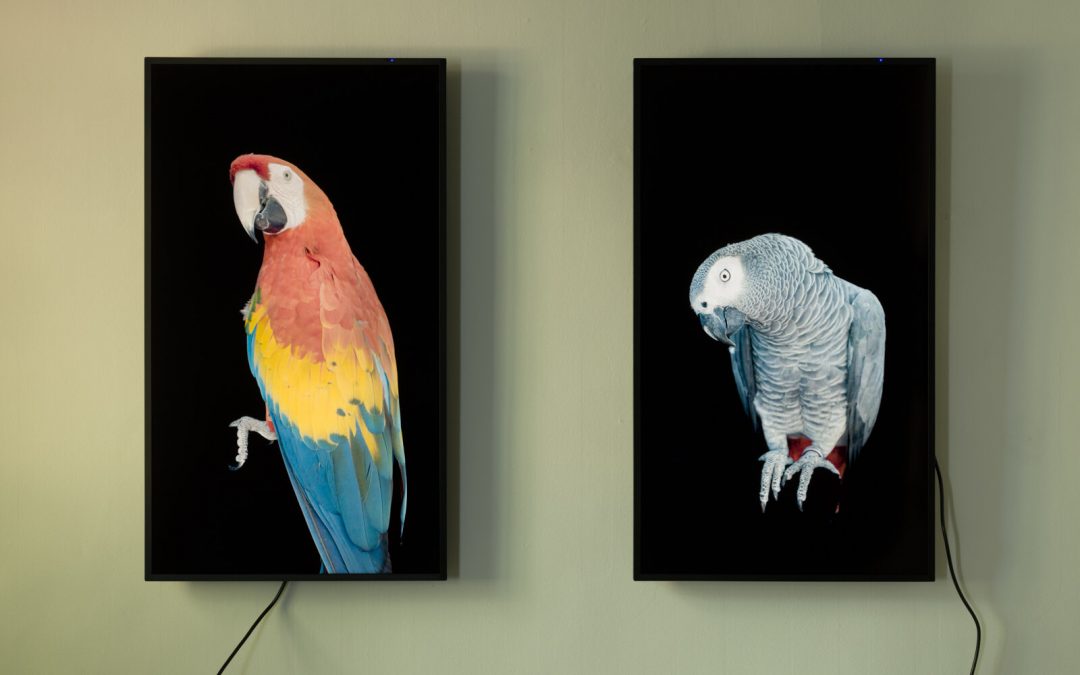 Animals have been the subject of Diana Thater‘s works for a number of years. From gorillas to monkeys and elephants to zebras, she has filmed animals to explore human animal interactions, animal subjectivity and threats to natural habitats. Throughout her long career, Thater has created multi-projector and multi-monitor works that engage viewers with both formal and conceptual themes along these lines. 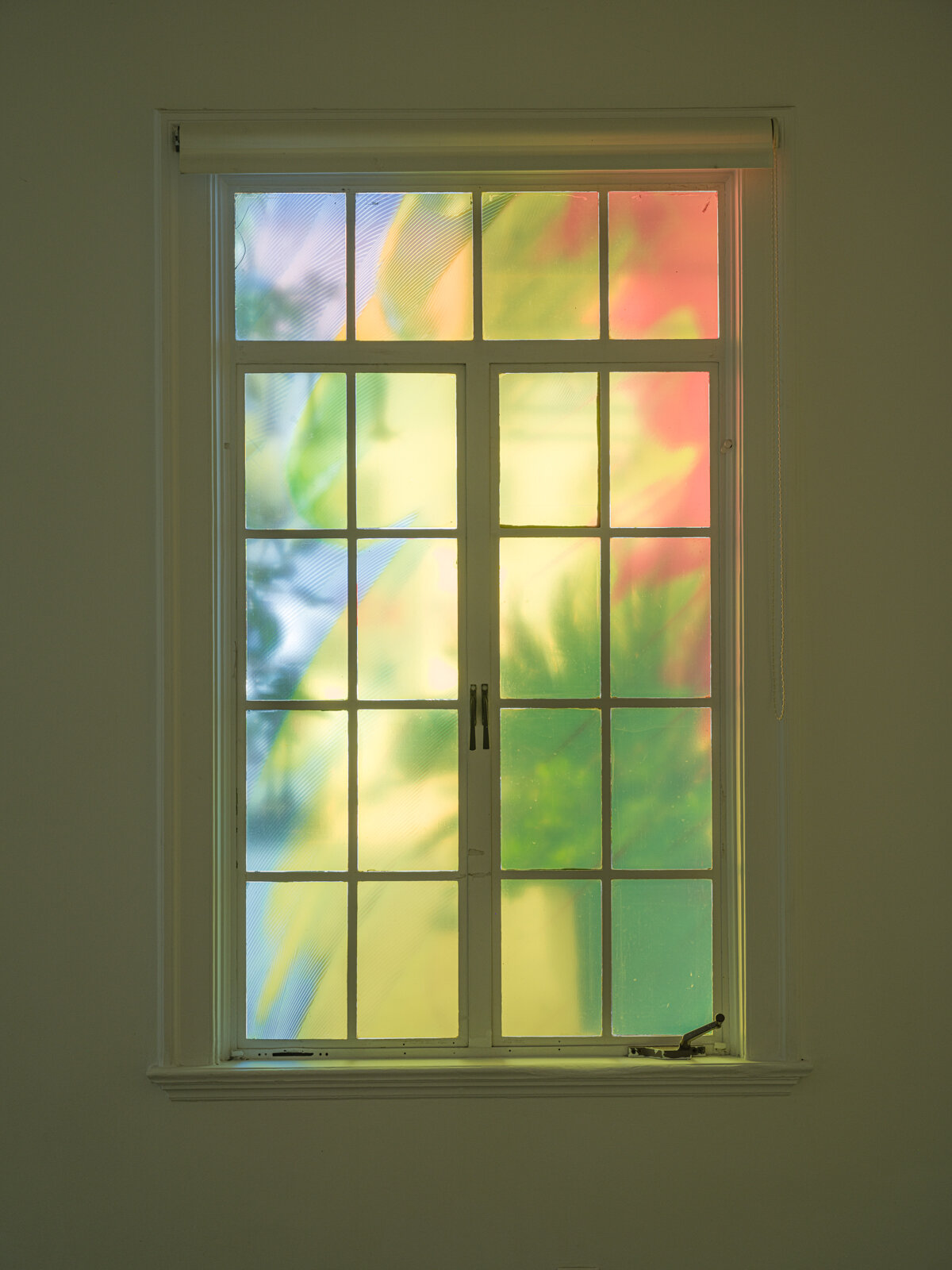 For The Conversation, Thater has documented a parrot and a macaw, framing them against black backgrounds. In the gallery, these birds are presented on two wall- mounted monitors at larger-than-life scale. Covering the windows, to help darken the space are Thater’s signature gels consisting of photographic blow-ups of the birds’ colorful feathers. On the floor are sets of speakers, as well as cords and cables that become black lines connecting the various machines. Rather than conceal this apparatus, she integrates it into the work, which become sculptural shapes and lines that criss-cross the space. 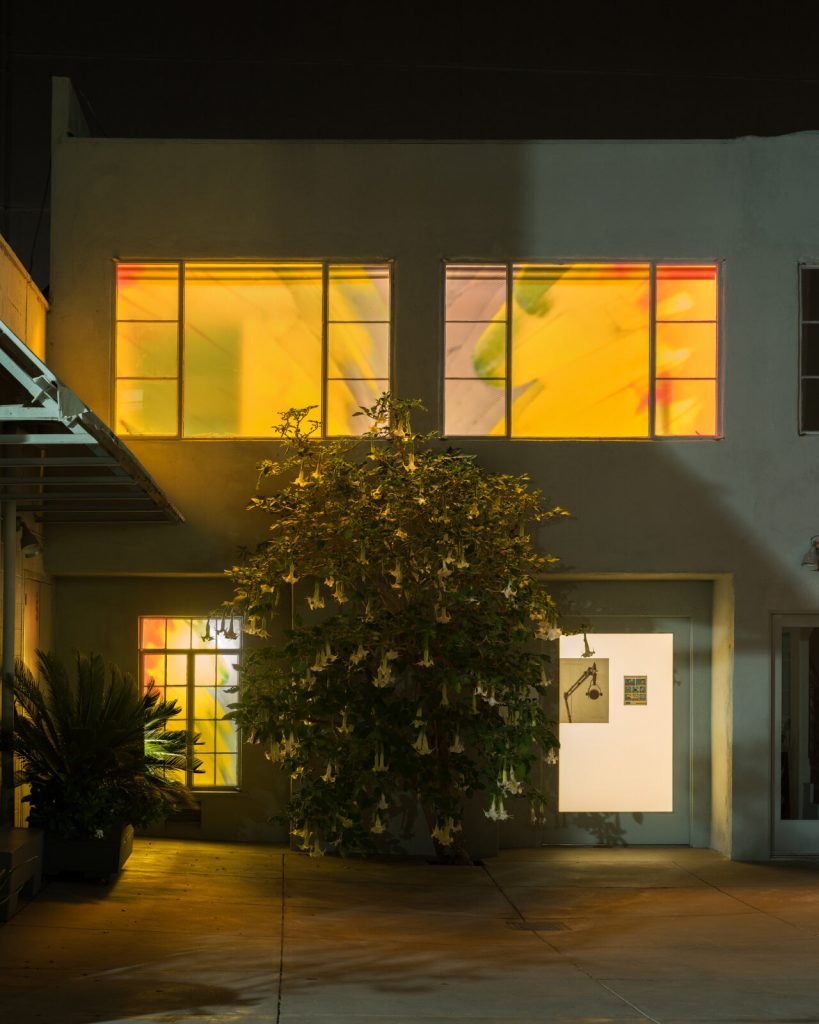 While watching oversized birds bob up and down and move their heads from side to side can be fascinating, The Conversation, is more intriguing as a sound work. Manipulated voices adjusted to high frequencies speak simple phrases matter of factly, becoming a call and response. Overlaid onto this dialogue are disparate squeaks and noises that come from the birds. The Conversation is presented as two diptychs: Talk to Us in the downstairs space and Listen to Us upstairs. In Talk to Us, the monitors are adjacent to each other on one wall, whereas in Listen to Us, they are installed on opposite walls. 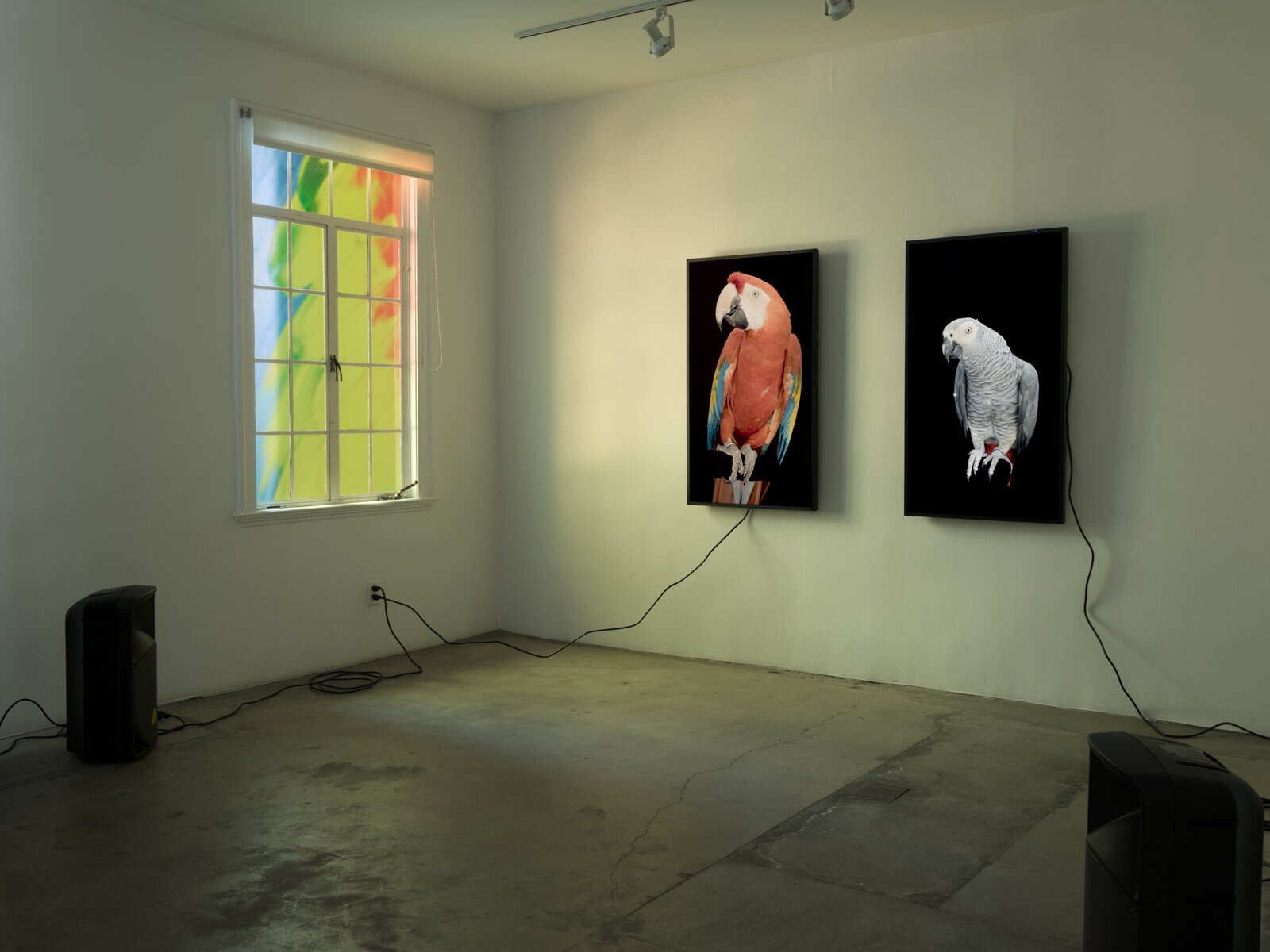 While Thater’s practice is not rooted in appropriation, she does occasionally work with historical art and cultural references. It is impossible not to think of the 1974 film The Conversation when regarding this piece, as the film centered on the misinterpretation of language through audio surveillance. Early works by Bruce Nauman also come to mind, specifically Good Boy Bad Boy (1985), in which commands and declarations were repeated over and over by two talking heads on separate monitors in order to explore confrontation and the emotional intensity of language. 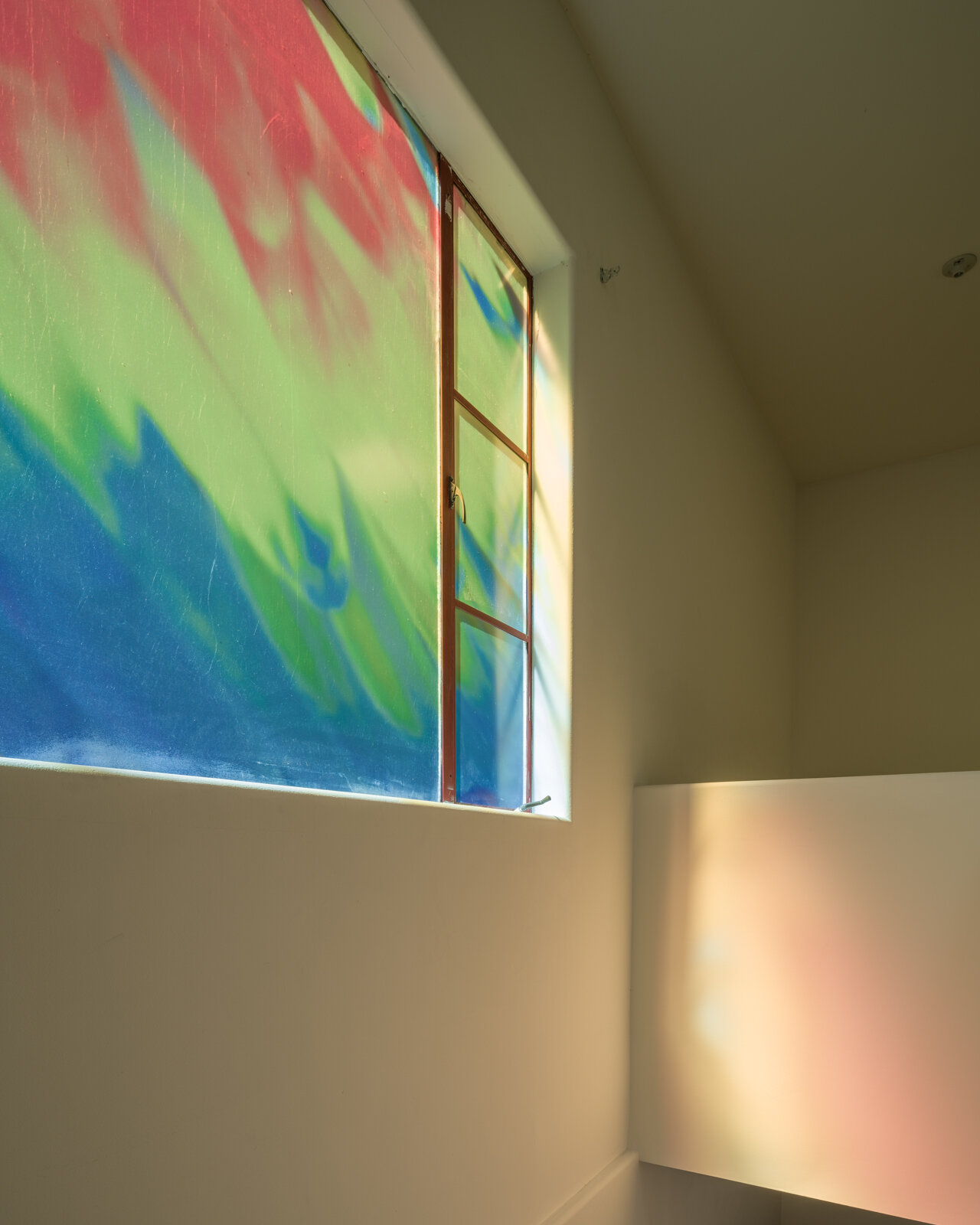 Thater’s work is more playful than confrontational. The soundtrack includes simple phrases that are actions that appear to bounce from one bird to the other, often interrupted by squawking bird sounds. Verbs like: to stand, to sit, to lay, to fall, to break, to come, to go, to crash, to run, to walk, to hide, to kill are juxtaposed with works that relate to Thater’s process: space, time, image, color, sound, light. At times, the words express more philosophical relationships: up and down, text and poetry, in and out, remove and replace, hidden and revealed; as well as commands: pay attention, get out of this room, get out of my mind; as well as self-referential: the story, the tail, the wings, the feathers. 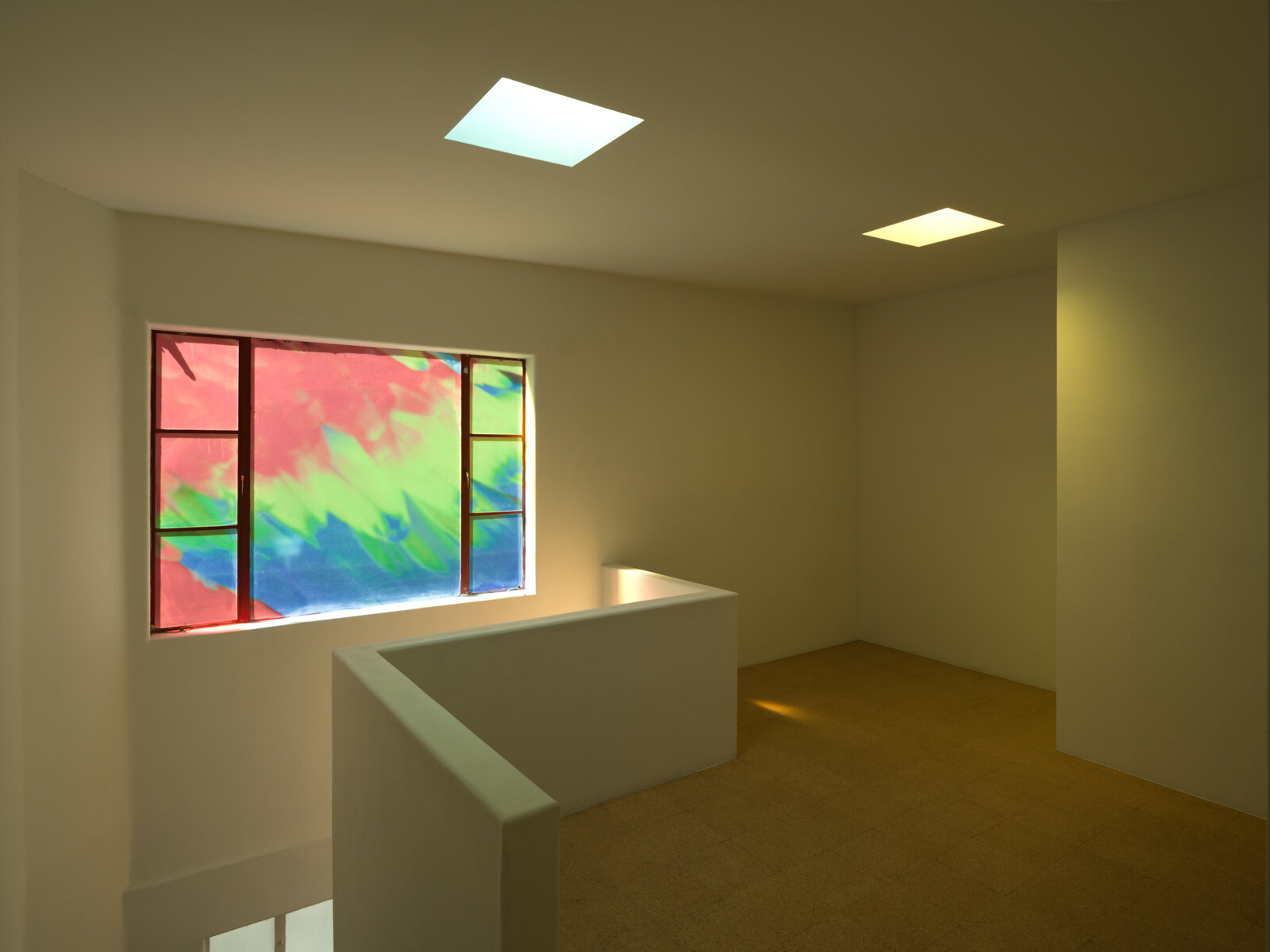 There is much to look at and listen to as Thater creates a fragmented conversation with ambiguous meaning. While she has an interest in how birds process language, the work is a layered simulation poetically using words and phrases narrated by humans juxtaposed with actual bird noises. The effect is dramatic and unsettling, as much of human animal relations can be.

Cover image, Talk to Us; all images courtesy of 1301 PE, photographed by Frederik Nilsen