Aubrey Levinthal: ‘The Breakers’
Reflecting the Malaise and Isolation Brought On By the Pandemic 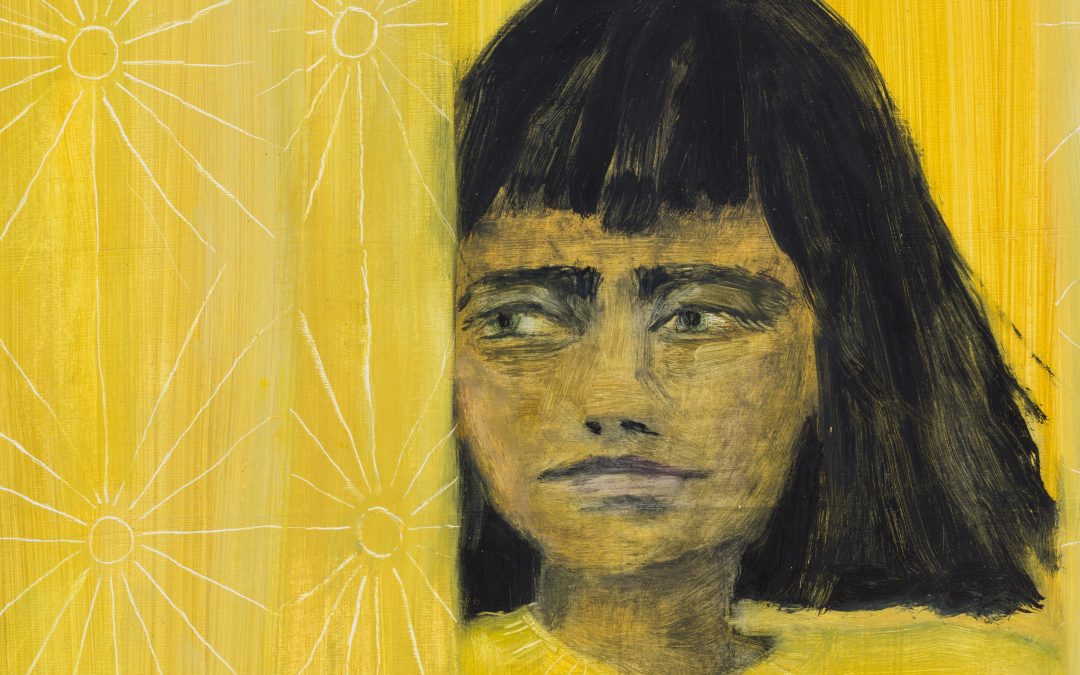 Philadelphia-based painter Aubrey Levinthal, whose works illustrate everyday moments culled from family life, renders her subjects— mother (the artist), child, father and friends – lovingly. They feel like remembered fragments collaged together to create a story about the last eighteen months. Levinthal depicts interior and exterior spaces, using a soft, subdued palette that accentuates both the vulnerability of the people in the scenes, as well as a tender intimacy. 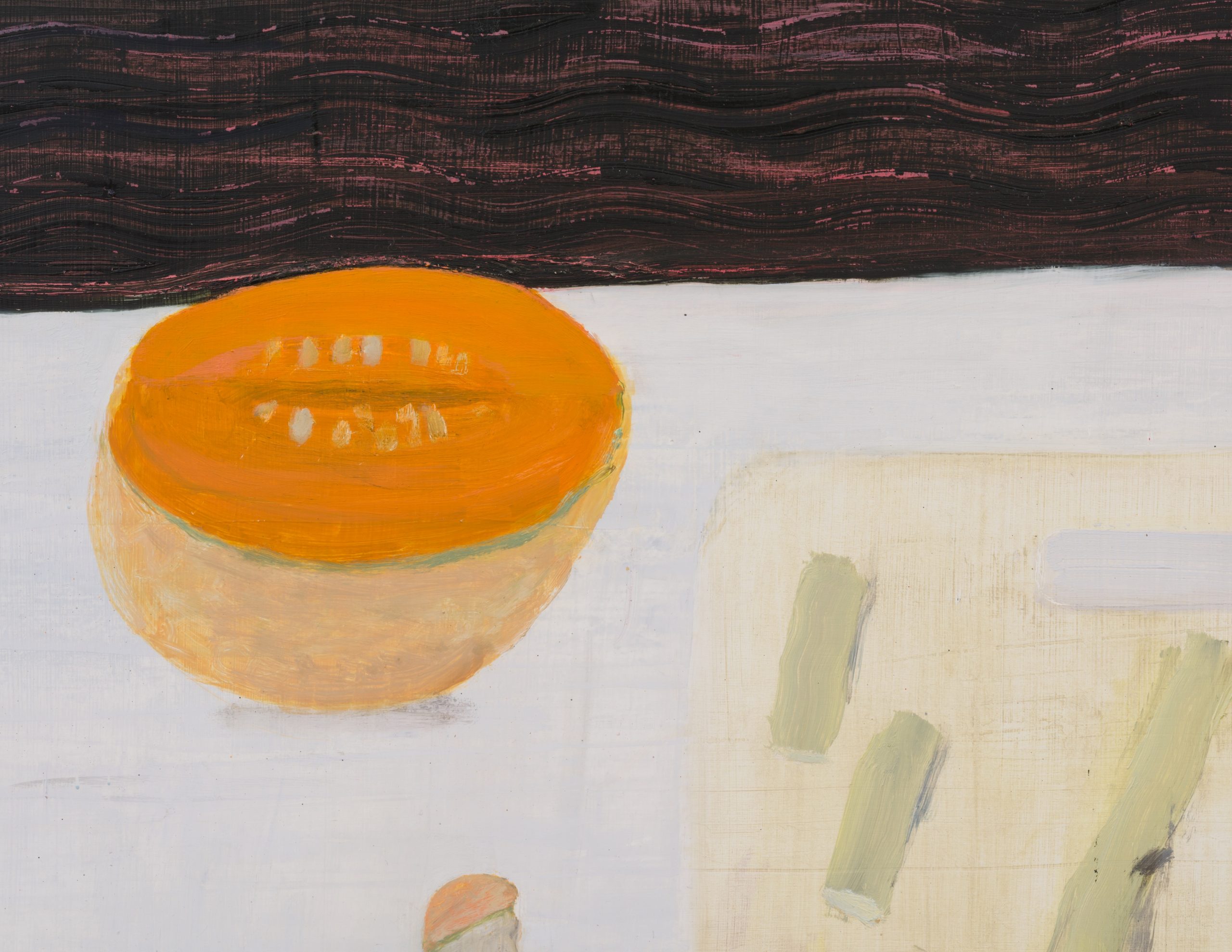 These works reflect the malaise and isolation brought on by the pandemic. In Bed Beach (all works 2021), Levinthal looks straight on at the head of a woman lying on her stomach, her body stretched out behind her. In this close-cropped image we see a woman at rest, her head nestled in a pillow covering all but one eye. Her dark hair is piled into a bun and she gazes out past the viewer, or at an unseen screen, as a small TV remote sits by her foot at the back of the bed. There is a weightiness to the moment. Perhaps the woman is indulging in an afternoon nap, or is fatigued by the goings-on in the world. 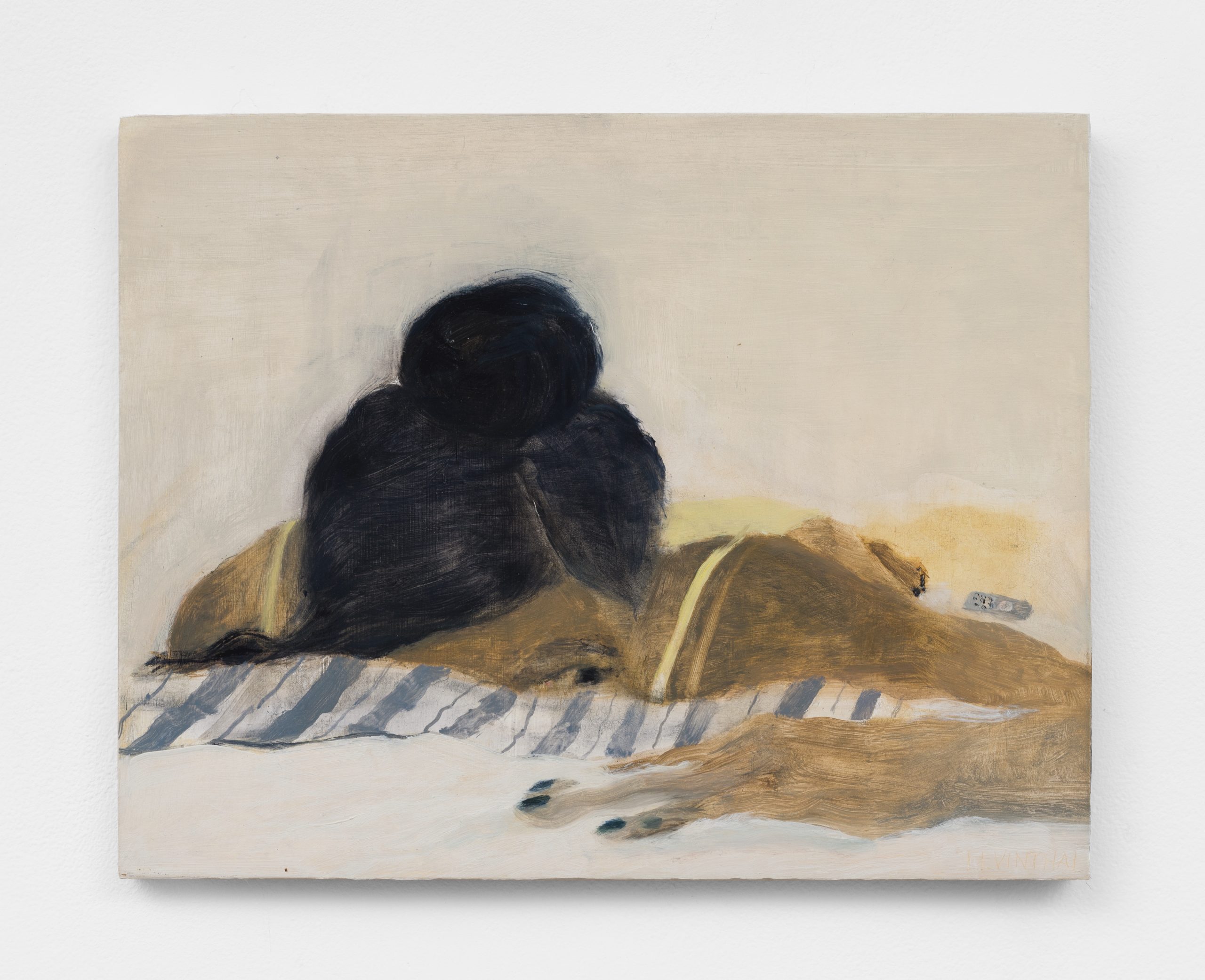 A similar moment of repose occurs in Man as Table. Here, Levinthal transforms a man into a table. Cutting across the bottom of the composition is a brown rectangle with an iPhone and a pad of yellow ruled paper. At first glance, it is a table, but upon close inspection, it turns out to be the body of a man. His arm and hand parallel the bottom edge of the painting, his head projects diagonally out of the frame. Above this reclining figure is a white shape that becomes the body of a child who rests his head on his father’s chest. Once this distorted perspective resolves, it becomes clear that Levinthal has captured a somber and delicate moment. 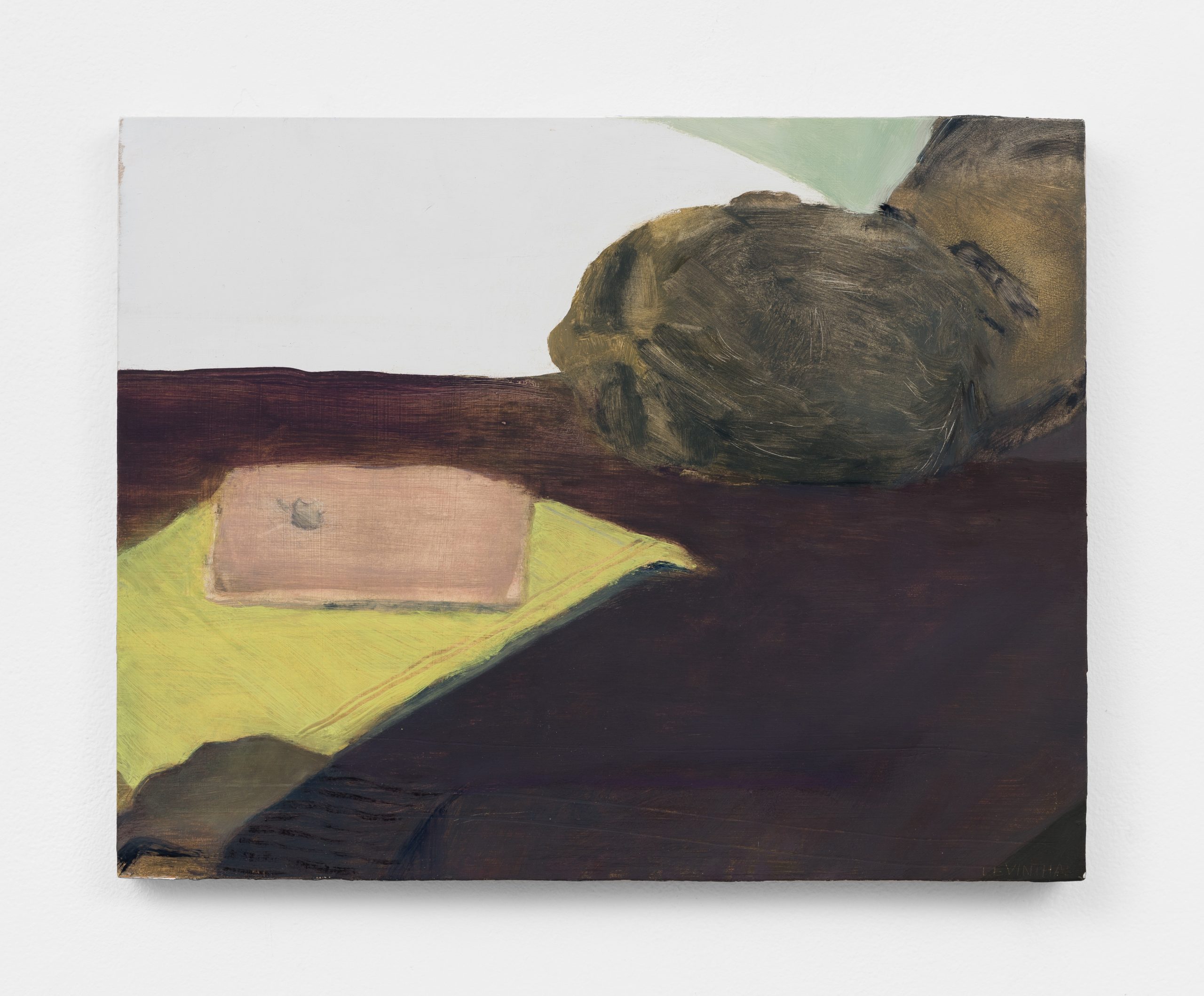 Father and son also appear in The Boys. The two figures are seated at a table. On the wall is a print of Hokusai‘s The Great Wave of Kanagawa that leads the eye toward an open window revealing a suburban neighborhood. The man and boy do not look at each other and appear lost in thought. Reflected in a napkin holder at the bottom of the image is a tiny rendering of a woman: present, yet not a part of the scene. In Knife Reflection, two sunflowers and a slice of cantaloupe are placed on a cutting board on a kitchen counter. Inserting herself into this banal scene, the artist is reflected in a serrated knife that sits on the left. 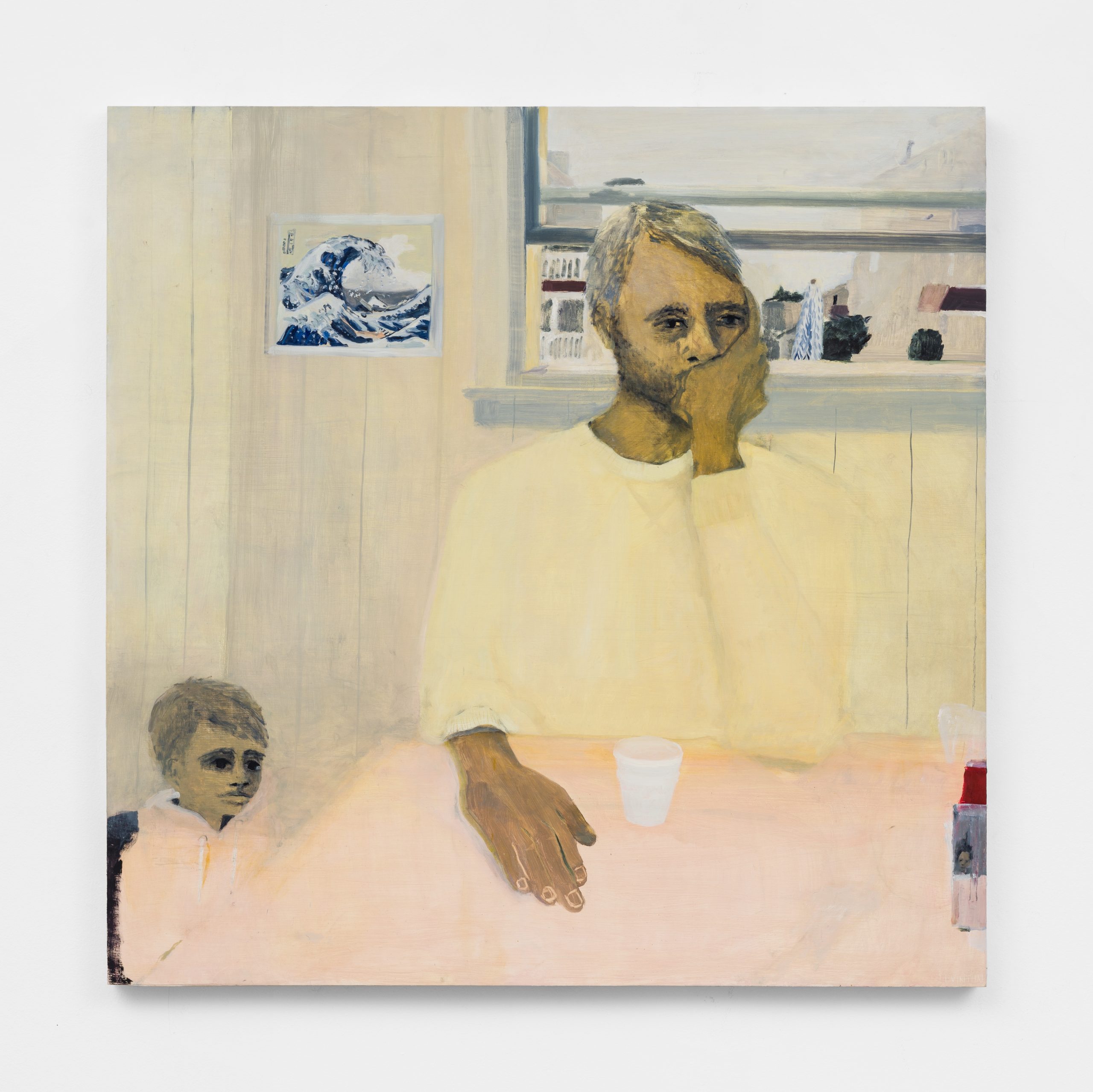 While bright yellow curtains etched with a flower pattern and sweater on the girl in Neighbor are intended to be uplifting, the girl remains isolated, framed by a window and looking longingly at the outside world. Alluding to the unsettling aura that has pervaded the world over the last year, even the plants in the flower box are not in full bloom. 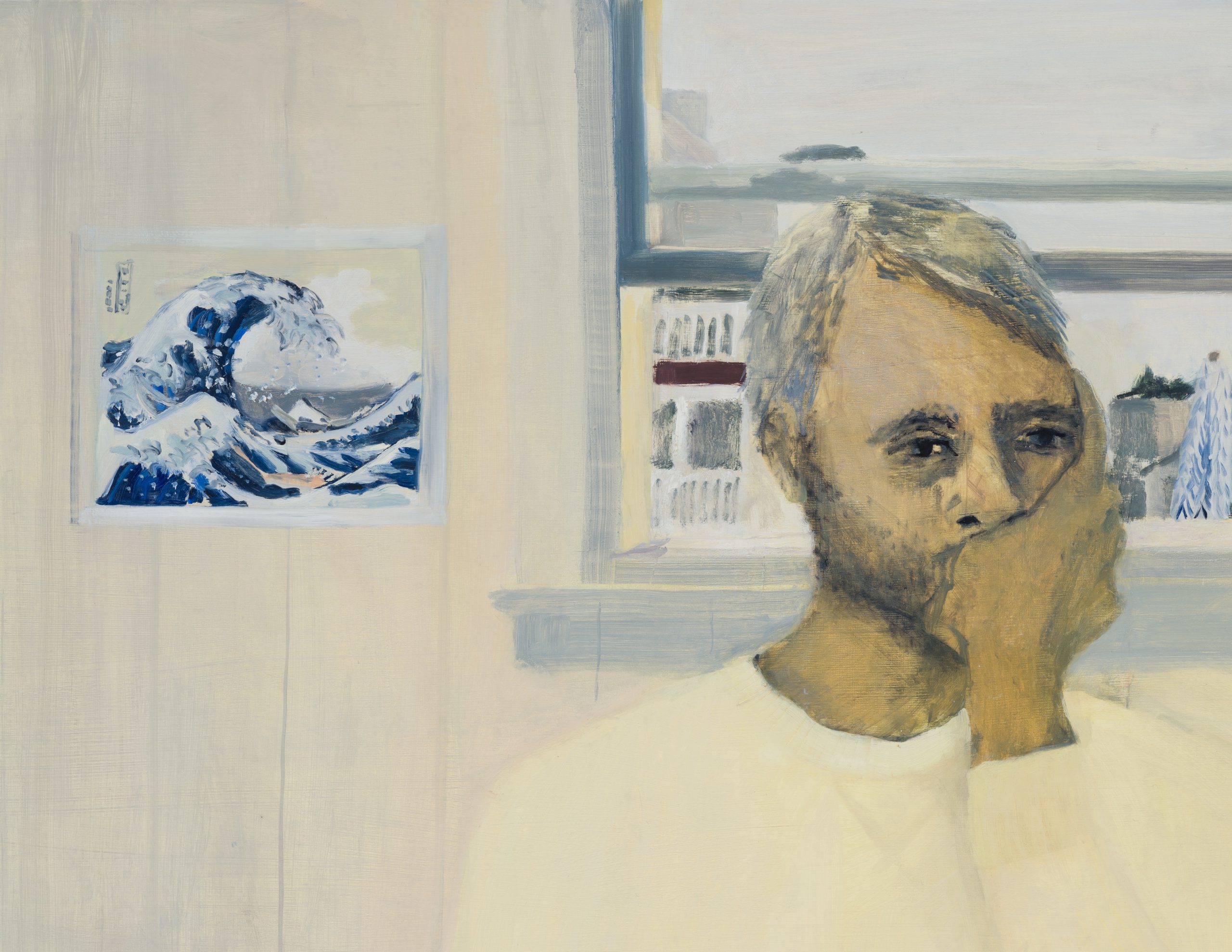 Self-Checkout has the composition of a casual snapshot that captures four women in a supermarket, two carrying babies. As in her other paintings, the scene is somewhat ordinary, a chance encounter, an interaction with others— but here, no one makes eye contact. This situation is reminiscent of how the social structure of everyday life has, indeed, changed. 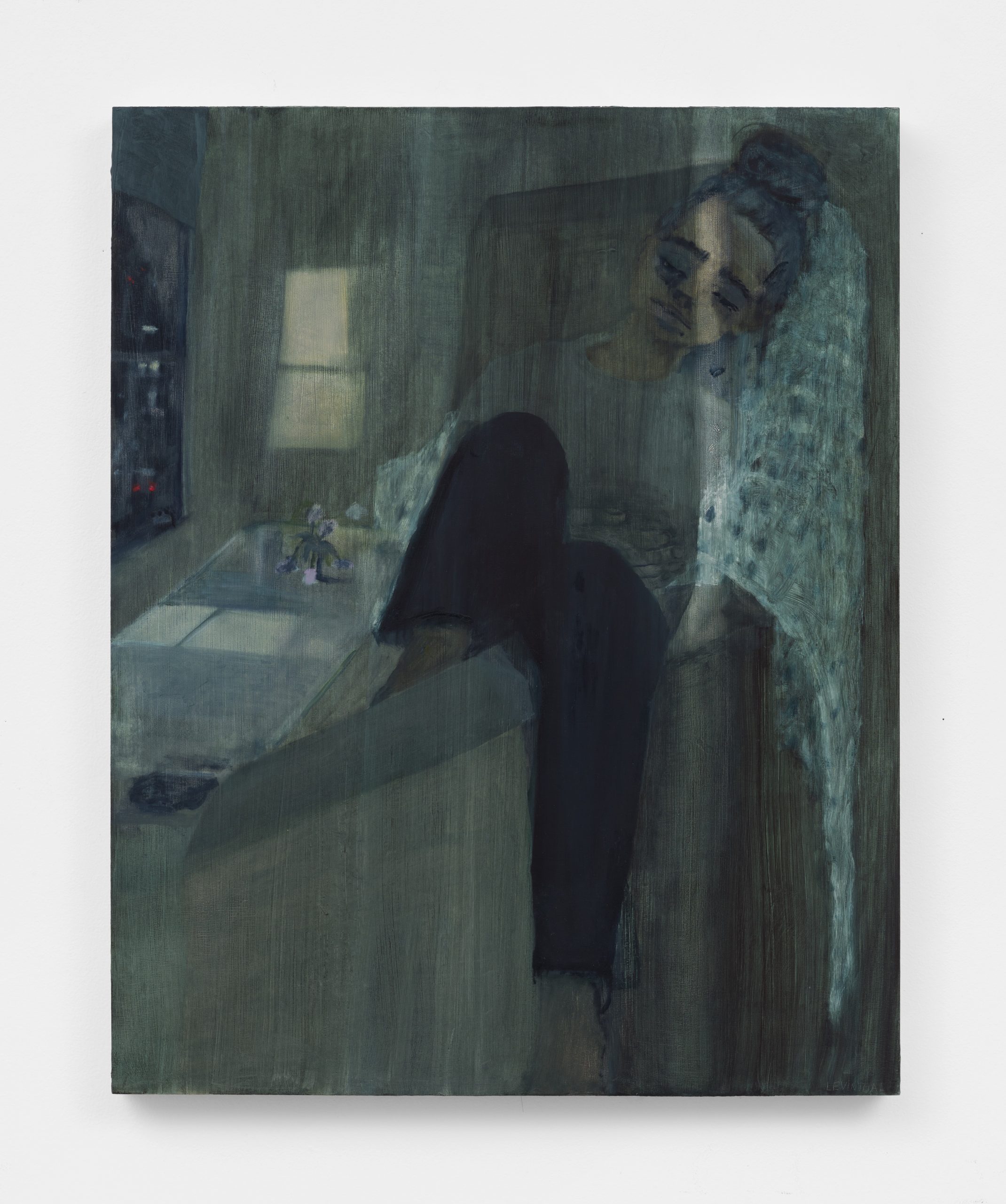 What is most captivating about Levinthal’s paintings is her attention to detail and her uncanny ability, despite a purposely muted palette, to convey a sense of light and emotion. These thinly painted oils on panel are quiet, filled with longing and a sense of melancholy. It is easy to relate to the woman in Hotel Lady. In this disquieting scene, a lone woman leans against the wall, her legs draped over the side of a couch. Her arms are crossed against her midsection, her head angled against the wall and cushioned by a light blue shawl. A thin band of light strikes her face creating a line down its center, only to fade out toward the bottom of the image. Behind her, soft light falls on a coffee table and illuminates the rest of the space. 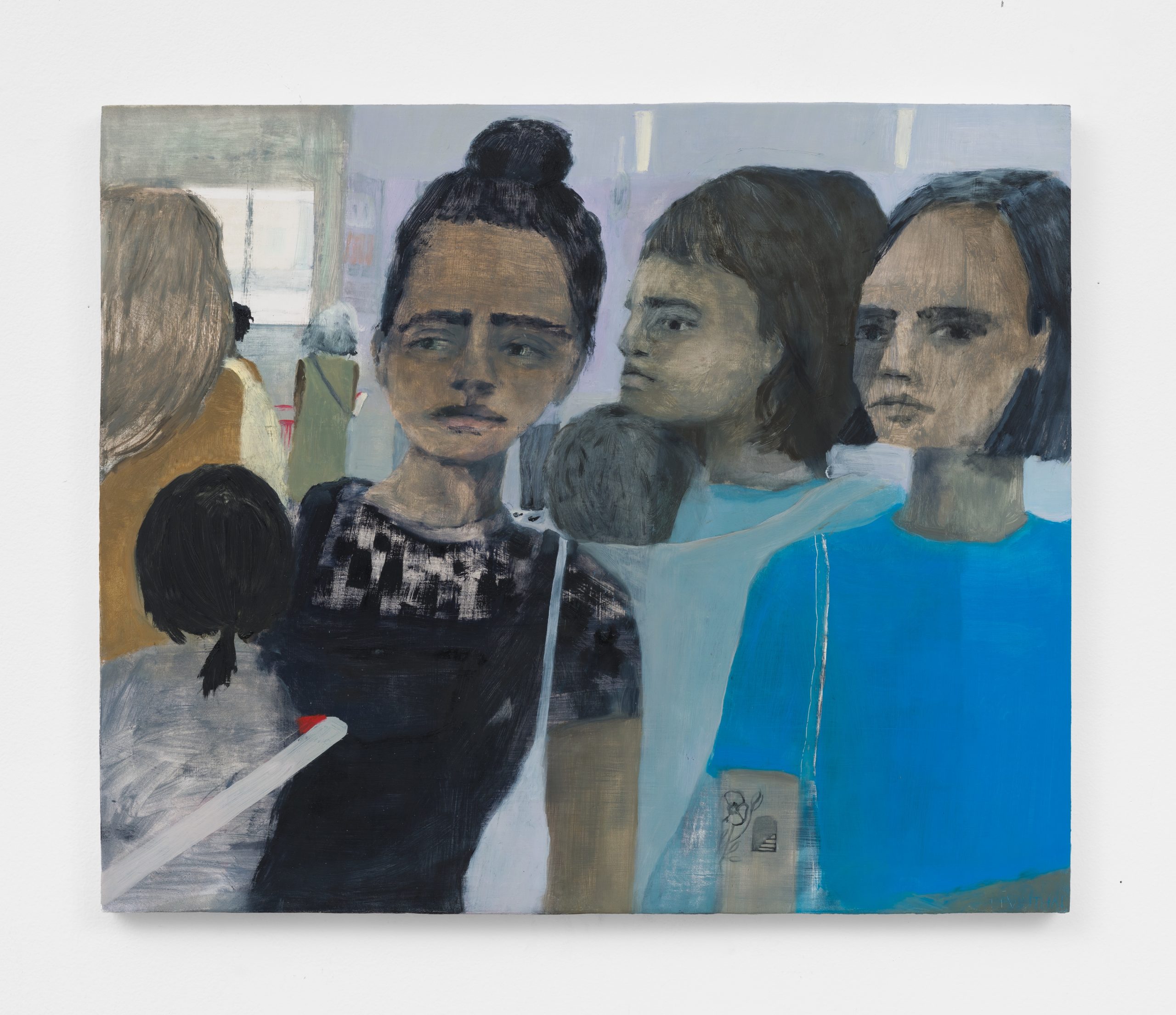 Whether capturing a scene at home or out in the world, Levinthal’s paintings evoke familiar moments. Her realistically rendered figures are devoid of fine details, heightening their vulnerability. These emotional paintings make the private public and while doing so, Levinthal shares her memories and observations about life during the pandemic year.