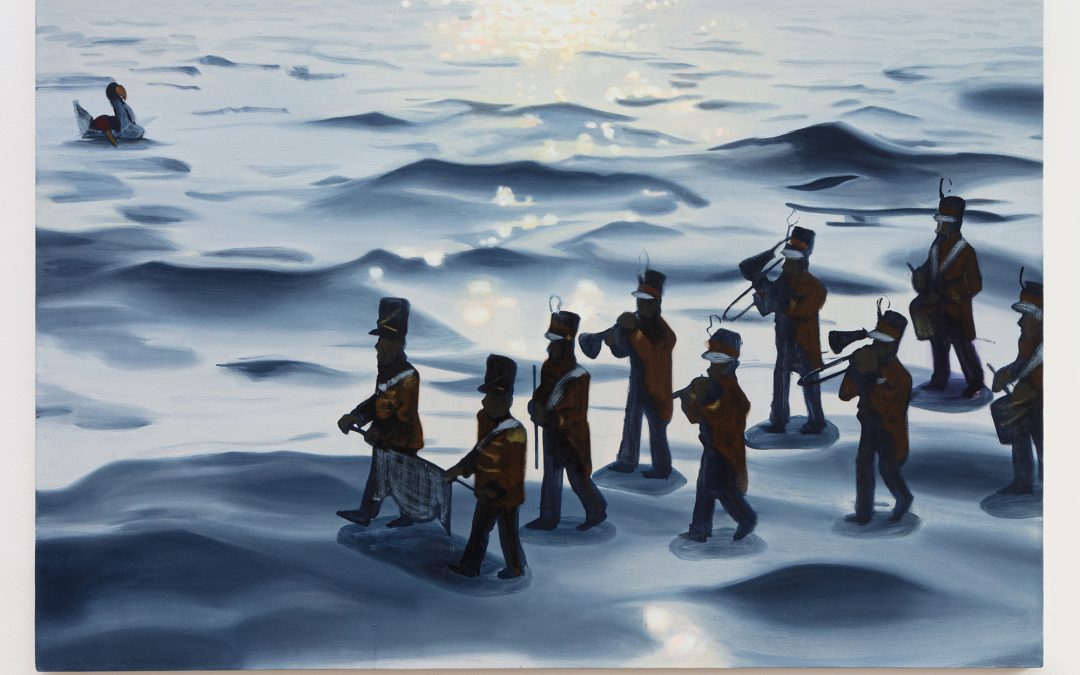 Yifan Jiang is a young Canadian artist who was born in Tianjin, China and is now based in New York City. She recently received her MFA from Columbia University (2020) and debuted new paintings and a projected video in back to back solo exhibitions at Meliksetian Briggs Gallery in Los Angeles. Jiang works in a range of media that includes painting, performance and animation. In the first of her two exhibitions, Medium-sized dry goods (July 17 – August 14, 2021), she filled the gallery space with five large-scale and two modest sized paintings. The second exhibition, Names for airy nothings (August 28 – October 16, 2021) also features large and small paintings that share the space with a thirteen-minute projected animation. 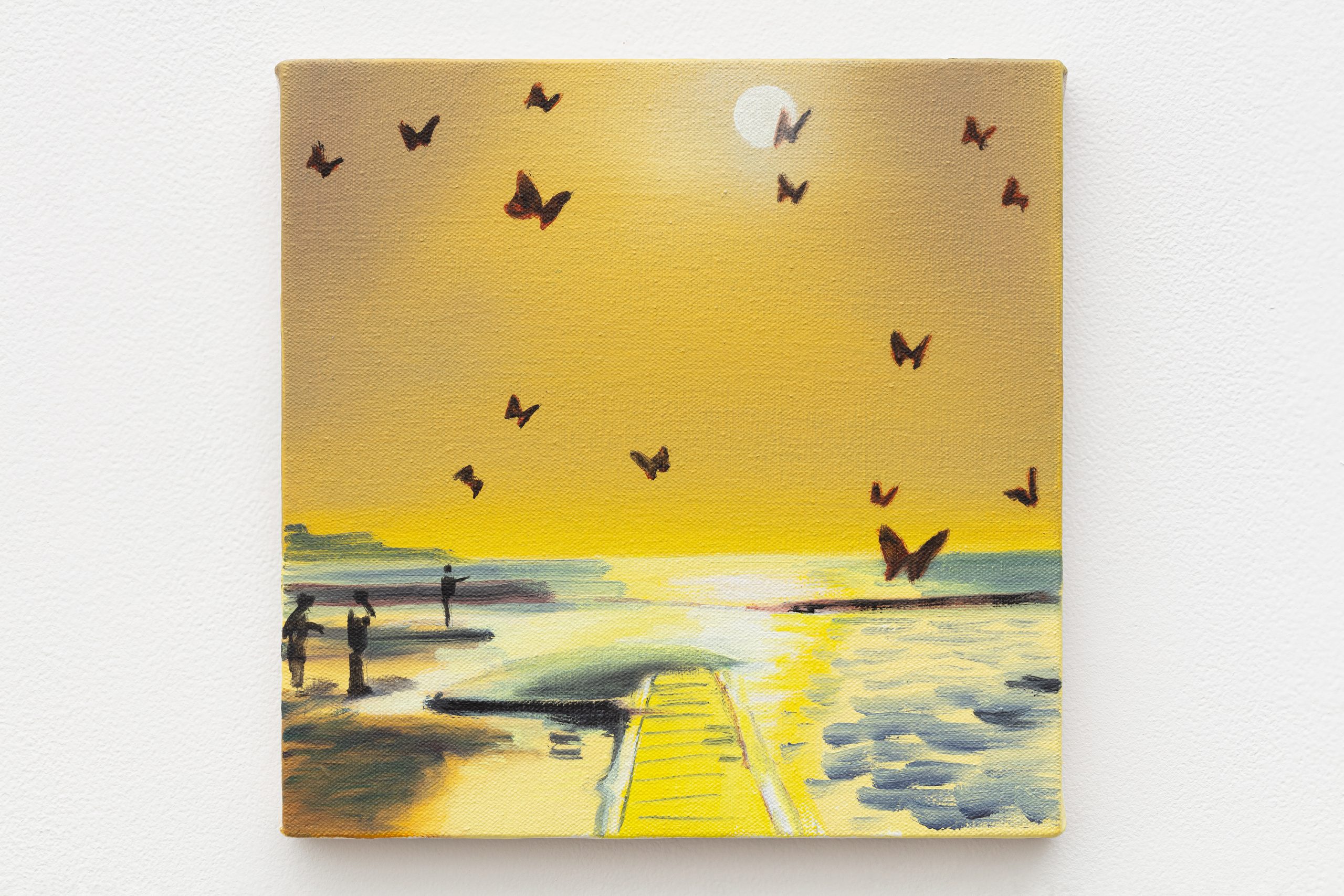 In her expressively painted, representational works, Jiang explores places where reality and fantasy collide. What is striking about these paintings is the use of perspective and to create unusual foreground background relationships. The paintings feel like close-cropped fragments extracted from larger scenes. 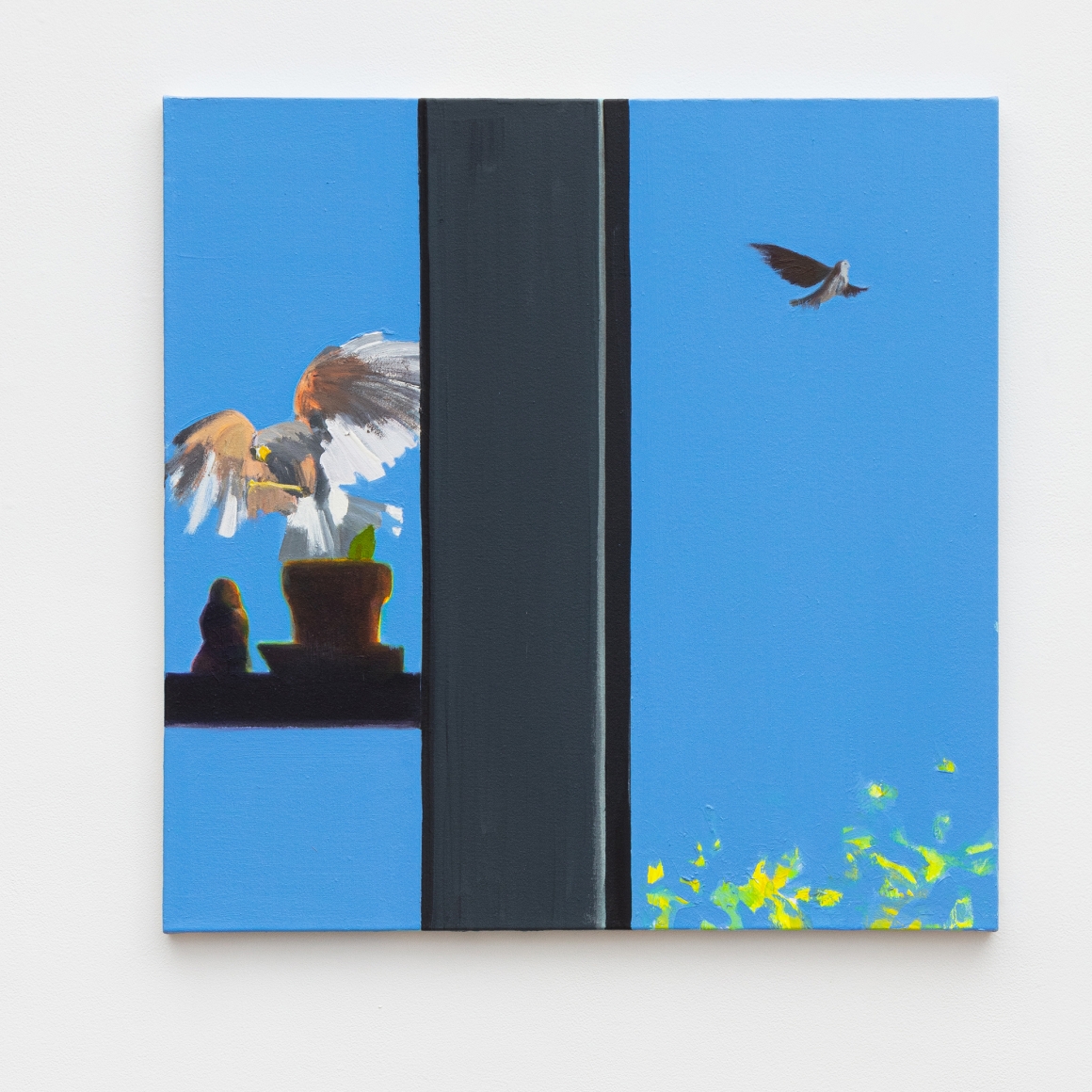 The paintings are surreal, but also melancholic. What exactly is happening in Farm? The small (10 x 10-inch) painting depicts two gigantic hands at either side of the work holding a black strap across the path of a boy who is making his way down a road. Again, Jiang confounds the size relationship as the boy is about the height of one of the fingers. Butterfly (also a 10 x 10-inch canvas) is a yellow-toned seascape filled with disproportionately large silhouetted butterflies that float in front of the sun (or moon) above the horizon. 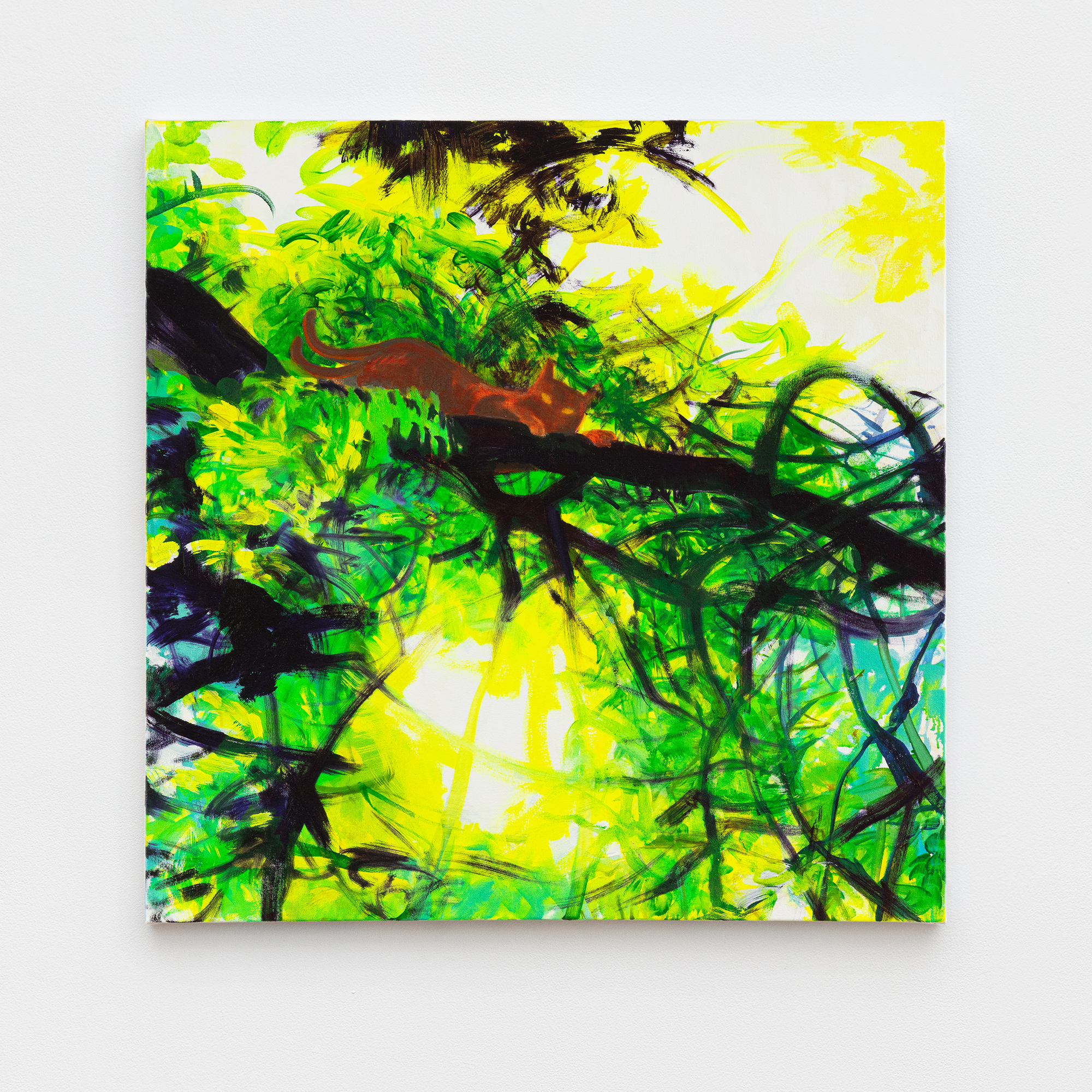 A band of musicians walk on water in Nap— trudging across undulating waves while in the distance, another tiny figure naps on a swan floating away towards the upper left of the composition. Two Tailed Cat is an unusual image in which a two-tailed orange-brown cat is perched high on a tree branch, its orange eyes peering down toward the viewer as if it is about to pounce. The limbs of the tree are surrounded by highly saturated green and yellow brushstrokes that suggest blowing leaves in a swirling wind. 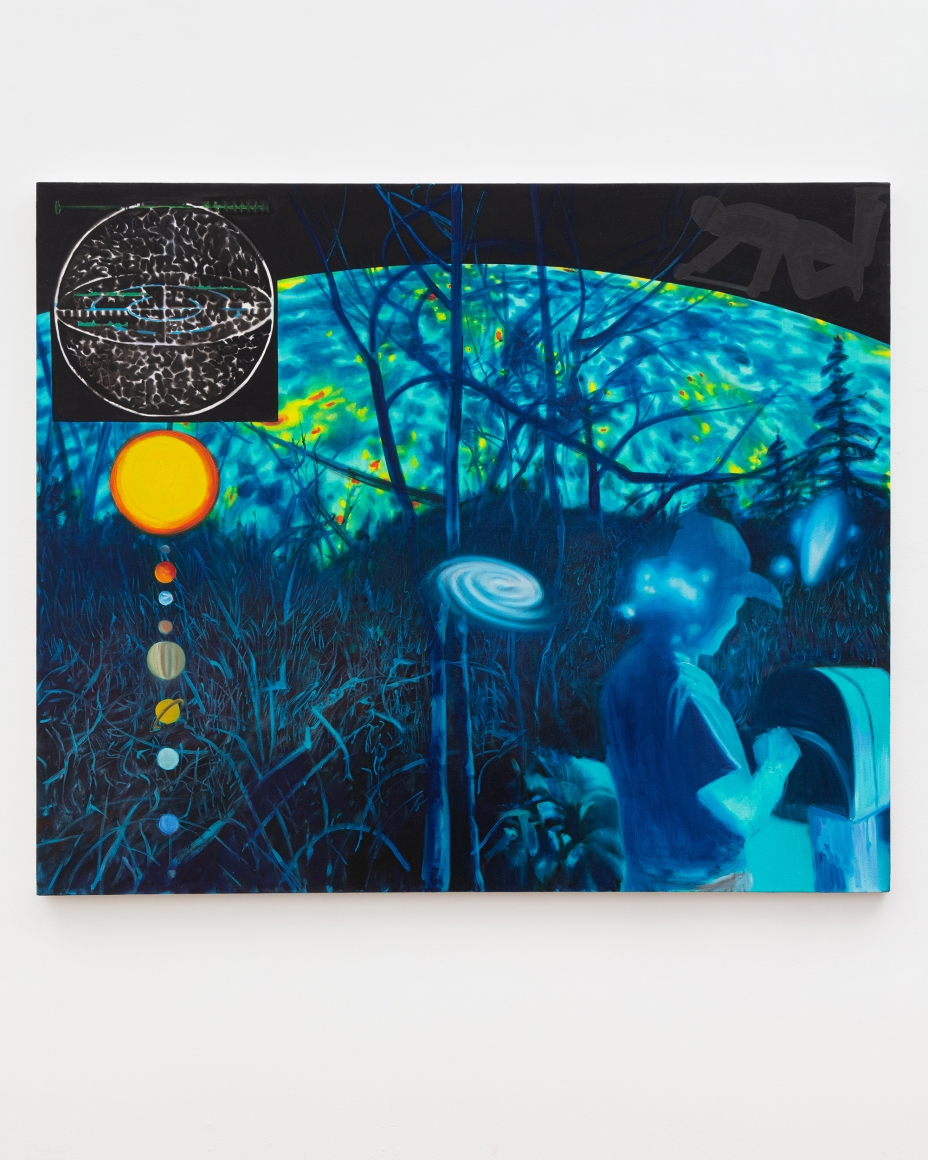 The gallery has dark and light states: light to view the paintings and dark to see the animation. Deep red drapes are drawn to block out the windows in order to view One Sunday Morning. While her paintings depict isolated moments, Jiang tells a longer and more complex story via animation. This 13-minute piece is narrated by a soothing male voice with a British accent that takes viewers on a strange journey to places on two sides of a world where language has disappeared and experiences are shared via touch. In this beautifully crafted and evocative work, people awake one Sunday morning to find that they cannot speak. As the narrative progresses, Jiang illustrates how the communities of ‘Downtown’ and ‘Uptown’ deal with the situation and learn to communicate using touch. 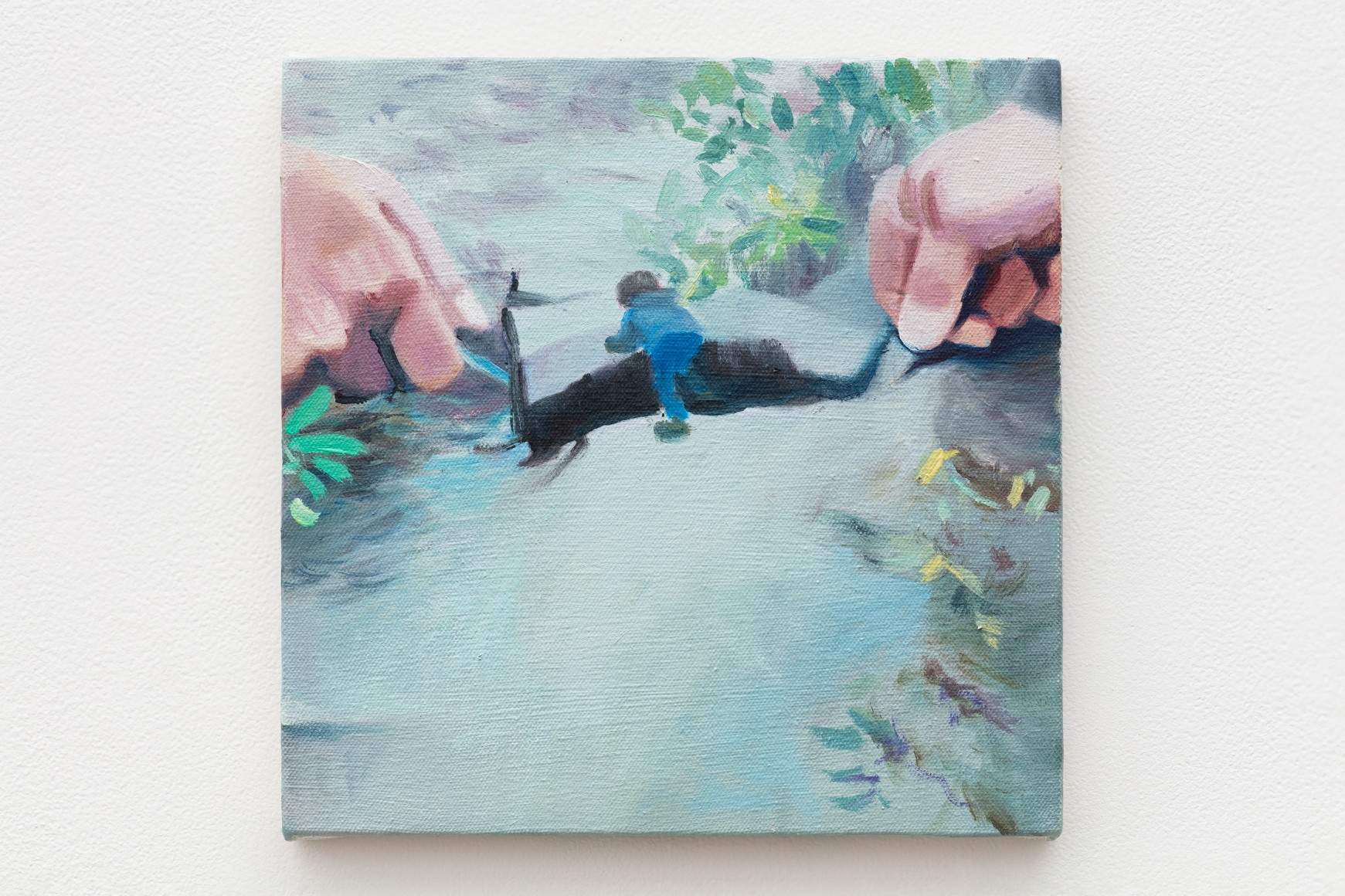 The depiction of the people and places within the animation are similar to the paintings — rendered in a loose sketchy hand, but often cut out and collaged together. Using digital technologies that emulate stop-motion techniques, Downtown and Uptown come alive. The narrative unfolds over a year and during this time, the use of touch communication becomes more complex as well as problematic. Two inhabitants— Barbara from Downtown and Trevor from Uptown— pack their bags to escape and travel the world. After a year, they crave human interaction as they can no longer tell what is real and where things came from. When Barbara sees Trevor, they run towards each other and embrace. Amid a swirling dance and changing landscape, they instantaneously begin to relive each other’s lives. Because they have nothing in common, they experience each other’s history from birth to the present, but this takes so long to transpire that they die in each other’s arms. 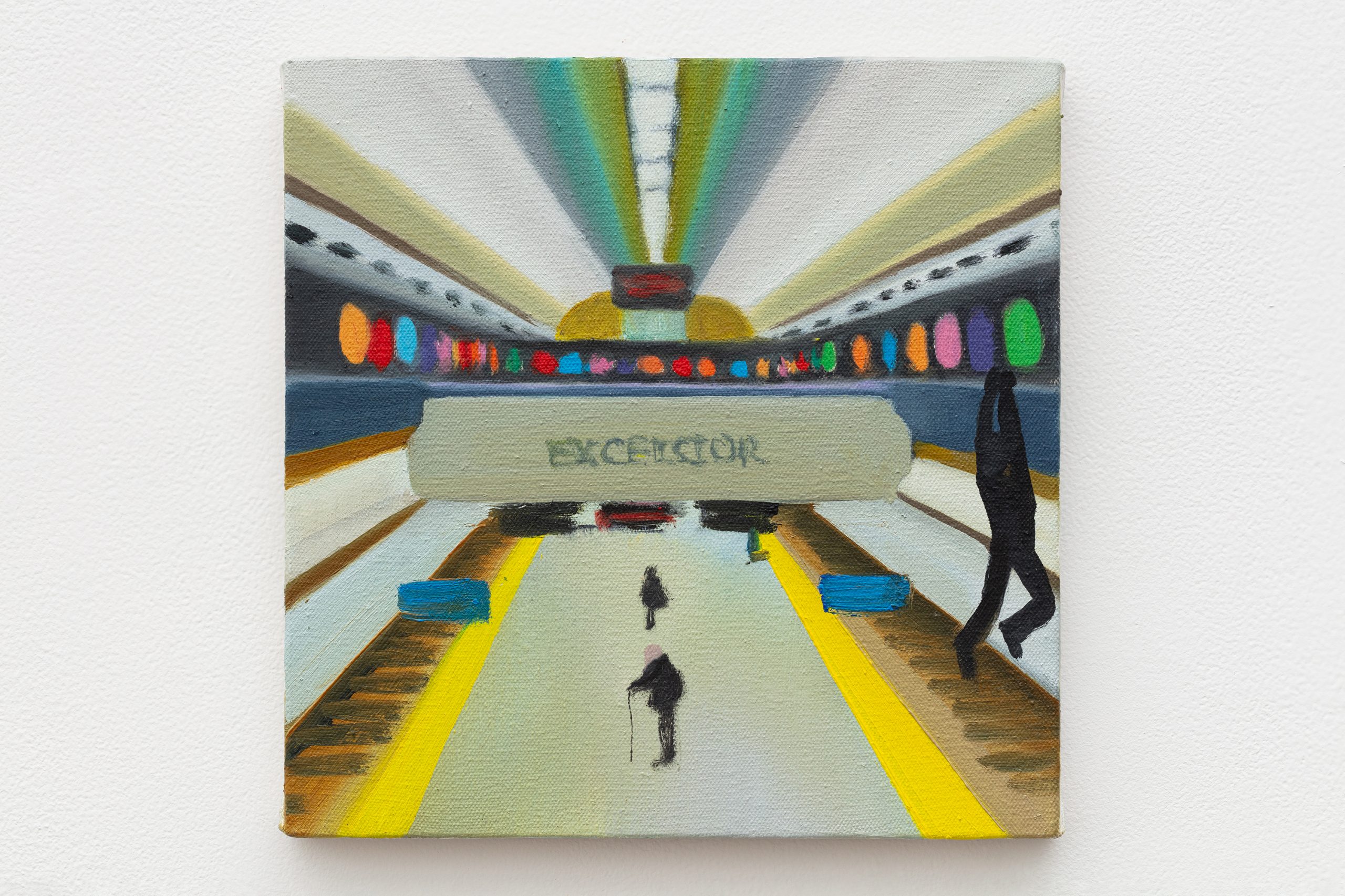 Thinking about life without language, one revisits the paintings and Jiang’s idiosyncratic world. Through both painting and animation, Jiang presents the future as a place that is part dystopic and part utopic. In her fantasy, the sky turns yellow, musicians walk on water, birds tussle with drones, humans and animals co-exist and people communicate via touch rather than with words. Together these two exhibitions “explore the limits of language and human empathy” leaving viewers to ponder these strange new possibilities.